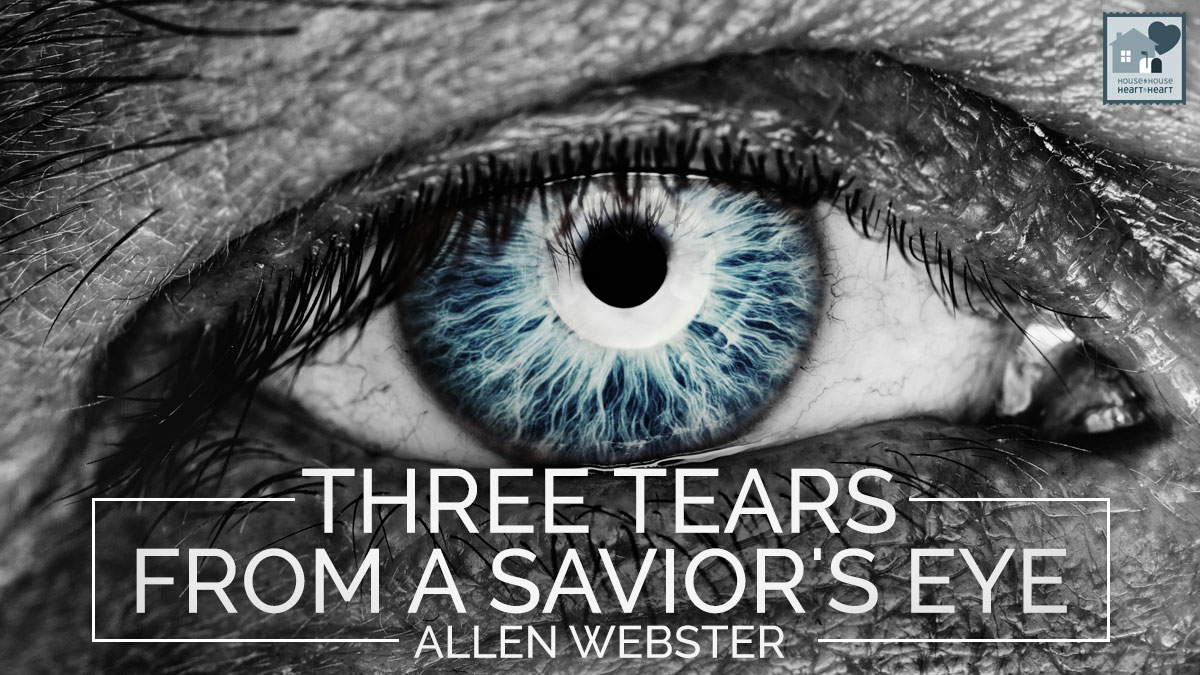 So we tell little boys when they fall. Then they read in their Bibles that Jesus wept. Does that mean He was a ‘sissy’? No. One has to consider the reason for the tears. Are they tears of weakness or strength? Of fear or compassion? Jesus was a man of sorrows, acquainted with grief (Isaiah 53:3), and He wept on three occasions. Each time He left us the right example.

The shortest verse of the Bible says a lot! It tells us that the Great Physician had good bedside manners. Jesus knew that people generally do not care how much you know until they know how much you care. He knew that Mary and Martha needed somebody to care about their pain. They had lost a brother and their hearts were breaking, so, even though He was about to resurrect Lazarus, He wept1 with those that wept (Romans 12:15; Job 30:25).

We should be ready to weep with those who weep. A little girl was late coming home from school one day. Her mother paced the floor until she finally arrived about fifteen minutes late. She opened the door and said, “How many times have I told you to come directly home from school! I was worried sick! Don’t you ever make me worry like that again!”

The little girl looked up with tears and said, “No, Mommy, you don’t understand.”

“What don’t I understand?” her mother said angrily.

The girl responded, “Today was Show and Tell and Jamie brought a china doll her grandma gave her.”

Her mother interrupted, “I don’t care how nice a doll Jamie had, you don’t stay to play … you come straight home!”

“No, no, Mommy, you don’t understand,” the daughter replied.

“Understand what?” her mother said slowly.

“When we were walking home, some boys were mean to us. Jamie dropped the doll and it broke on the sidewalk. And I stayed to help Jamie.”

Her mother smiled and said, “Oh honey, that is so sweet that you stayed behind to help Jamie fix her doll, but you still need to come straight home.”

“No, no, Mommy!” the girl said again. “It was broken so bad we couldn’t fix it! I stayed to help Jamie cry.”

O that we would have a heart like that. God does not want us to raise the dead or piece back together shattered china dolls, but He wants us to be Christ-like in the presence of the broken … and to help them cry.

Henry the Eighth, wandering disguised one night in London, was met at the foot of a bridge by night watchmen. They did not believe he was the king, so they shut him up without fire or candle in the Poultry Compter. Upon liberation, he granted thirty chaldrons of coals and some bread for all night prisoners in the Compter. Experience brings sympathy.

This world would be better if, instead of putting others in their place, we more often tried putting ourselves in the place of others. Those who have felt affliction, doubt, sickness, and temptation are more apt and better equipped to console those in similar conditions (2 Corinthians 1:3-4; 1 Peter 3:8). Christians are tenderhearted (Ephesians 4:32) and have been known to cry upon occasion in funeral homes and hospitals. This tear of Jesus was a tear of sympathy.

This was the most glorious public moment of Jesus’ life. He was ushered into the city with a hero’s welcome. Everyone is singing His praises (literally), yet … He breaks down in passionate sobs.2 Like the psalmist, rivers of waters ran down His eyes because they kept not the law (Psalm 119:53, Psalm 119:136, Psalm 119:158; cf. Jeremiah 13:17). Like Paul, there was great heaviness and continual sorrow in His heart for His kinsmen according to the flesh (Romans 9:2-3).

He had done all He could to get them to believe, yet they persisted in doubt. He had come that they might be enlightened, but they chose darkness (John 1:11). He wanted for them the abundant life, but they wanted eternal death (John 10:10). The city He had just entered was on God’s ‘hit-list’ (Matthew 24:4-34), and Sodom and Gomorrah got off easy by comparison (Matthew 24:21). These voices now shouting, “Blessed be the King that cometh in the name of the Lord” (Luke 19:38), would soon scream, “Crucify him, crucify him, His blood be on us, and on our children” (Matthew 27:23-25; Mark 15:14).

Jesus still weeps for lost cities and impenitent souls. He longs for men to mourn over their own sins (Matthew 5:4), so He won’t have to. A legend from the Middle Ages tells of a young woman who was expelled from heaven and told that she would be readmitted only when she brought back the one gift God valued most.

Each time she was turned away. One day she watched a man on horseback come to a fountain where a small boy was playing. Seeing the boy, he was reminded of his own childhood innocence. Then, looking into the fountain, he saw his hardened face. He was overcome by sins and began to weep penitent tears. She took one of those tears to heaven whereupon the door opened wide3 (2 Chronicles 7:14; Isaiah 55:7; Ezekiel 18:21; 2 Kings 22:19). The lost die daily unprepared for what awaits them. Many never give the afterlife an afterthought. We must make them think. Jesus let His tears drive Him to Calvary; ours must drive us to tell of Calvary (Mark 16:15). This was a tear of sorrow.

Hebrews 5:5-7 reveals a detail about that night in the Garden that neither Matthew, Mark, Luke, nor John gives us. It says, ‘when he had offered up prayers and supplications with strong crying and tears unto him that was able to save him from death, and was heard.’ Jesus wept in Gethsemane the night He was arrested. This was not silent, personal grief, but loud, public crying. The disciples-had they been awake-could have heard it at the stone’s-throw distance.4 This episode shows Christ’s humanity. He did not want to suffer Calvary’s humiliation, pain, and separation (Hebrews 12:2). He prayed that God would find some other way to save man, but there was no Plan B (Mark 14:32-35; Luke 22:40-44).

Americans take 33,000,000,000 aspirins a year.5 Jesus knows every headache. Sixty-to-ninety percent of medical office visits are for stress-related symptoms.6 Jesus knows every stressor (Ecclesiastes 8:16; Luke 10:40; Luke 21:34). Countless pillows are wet each night with heartache’s tears, and sleep flees from dread of the future. Jesus sees every tear and understands every fear. We can cast our cares upon Him, for He cares (1 Peter 5:7). He understands because He has been there. Augustine of Hippo said, ‘God had one Son on earth without sin, but never one without suffering.’ Everybody has problems; the wise ones let their troubles drive them to the Garden of prayer. This was a tear of struggle. Man is the only creature God made that can cry. No other experiences sorrow to the extent that we do. But God is there to comfort (Psalm 23:4; 2 Corinthians 1:3-7; 2 Corinthians 2:4; 2 Corinthians 7:2-11). Big boys sometimes cry-for Christians never outgrow being children (of God).

1 The root of the word weep here (klaio) means, “to sob, or wail aloud.” It does not just mean to become teary-eyed or weep silently (dakruo).
2 The word is klaio again.
3 Don McCullough, Jesus the Judge, Preaching Today, Tape No. 129.
4 Strong, ischuros, means “forcible; boisterous, mighty” and crying, krauge, could be translated “an outcry” (it comes from a root, krazo, meaning, “to croak as a raven; scream aloud; shriek, exclaim”).
5 Reader’s Digest Book of Facts.
6 Harvard Business Review (11-12/94).