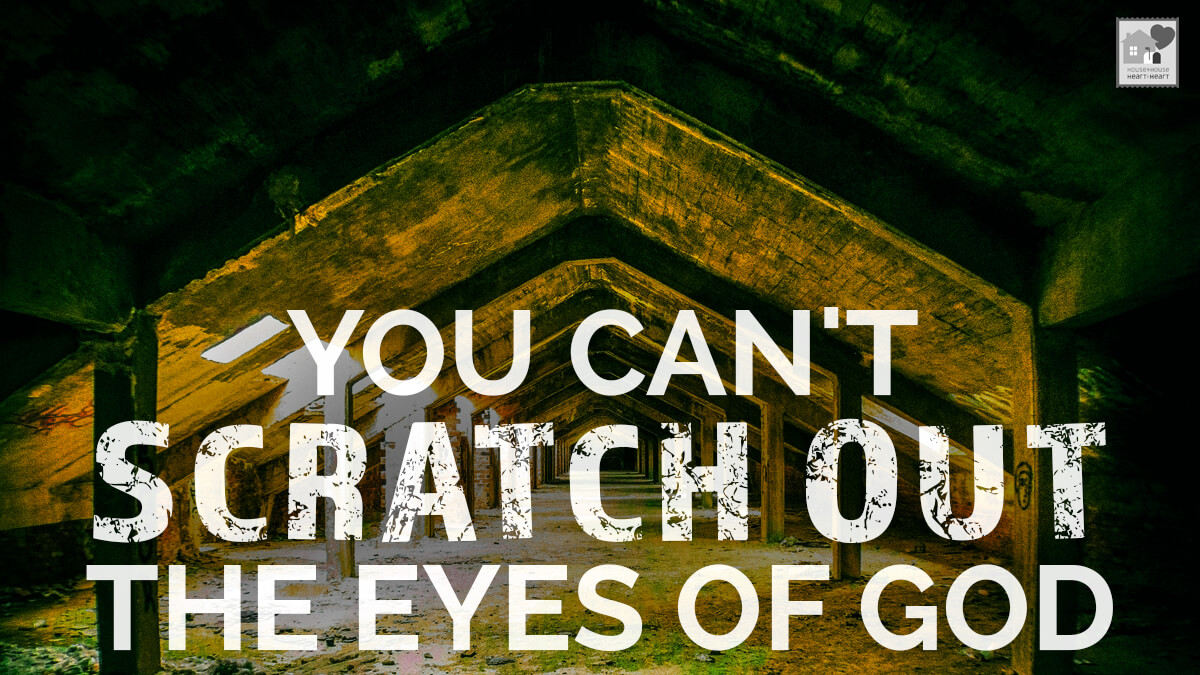 Home Christianity You Can’t Scratch Out the Eyes of God

Once there was a little girl who lived on a large farm way out in the country. Almost everything the family ate was raised on the farm. Apples in the fall were a great treat. To preserve them for the winter, the mother used to peel and hang them on long strings to dry in the attic.

This little girl was very fond of dried apples. Yet, they were for winter and spring and so the mother forbad her to eat them when she went into the attic to play. The child would walk all around the apples, touching and smelling them, but she did not dare take any of them.

And why do you suppose that she didn’t take them? It was not really because of mother, but because of a picture hanging on the wall. It was one of an old man, and his eyes seemed to follow her no matter where she went in the attic. When she was among the apples, she could feel his eyes gazing right at her. His eyes seemed to stop her each time she was tempted to pull a string and eat the slice of apple that was on it.

The little girl soon became very unhappy and then very cross with the old man in the picture. If only he wasn’t around she could just dive right into the apples and eat her fill. So what do you suppose she did? One day when mother was away she went up into the attic and scratched out the eyes of the old man with a pair of scissors. Then she ate the apples.

When the mother found what was done, she took the little girl on her knee and carefully explained that there were other eyes that were watching her besides those in the picture, eyes that could see everywhere and knew what each child was doing whether in the cellar or attic. These were the eyes of God.

“Can I scratch out God’s eyes?” the little girl asked.

“No,” replied the mother. “People try it all the time. Yet, they only fool themselves. Little by little they grow blind to God and to His standard of right. So, when they finally go blind themselves, they think they have succeeded in scratching out God’s eyes.”

“But I can still see just as well as I always could,” replied the little girl.

“I know you can still see well,” explained the mother, “but we have eyes in our souls as well as in our heads. The first time we do wrong, we feel very bad yet if we continue to do that same wrong, eventually we don’t even give it a second thought. When our soul loses its sight, we then grow very dark inside, for there is no light. We lose our way, and things that used to be right and wrong get all mixed up. No one is blind as the one who puts out his own eyes. That was the mistake you made in scratching out the eyes of the old man in the picture. You wouldn’t have been troubled with those eyes if it hadn’t been for the eyes within you that saw you doing wrong.”

So the lesson is a good lesson for us all. Let us live and pray knowing that He not only leads us, but watches over us every step of the way.-Notes, Great Oaks church of Christ