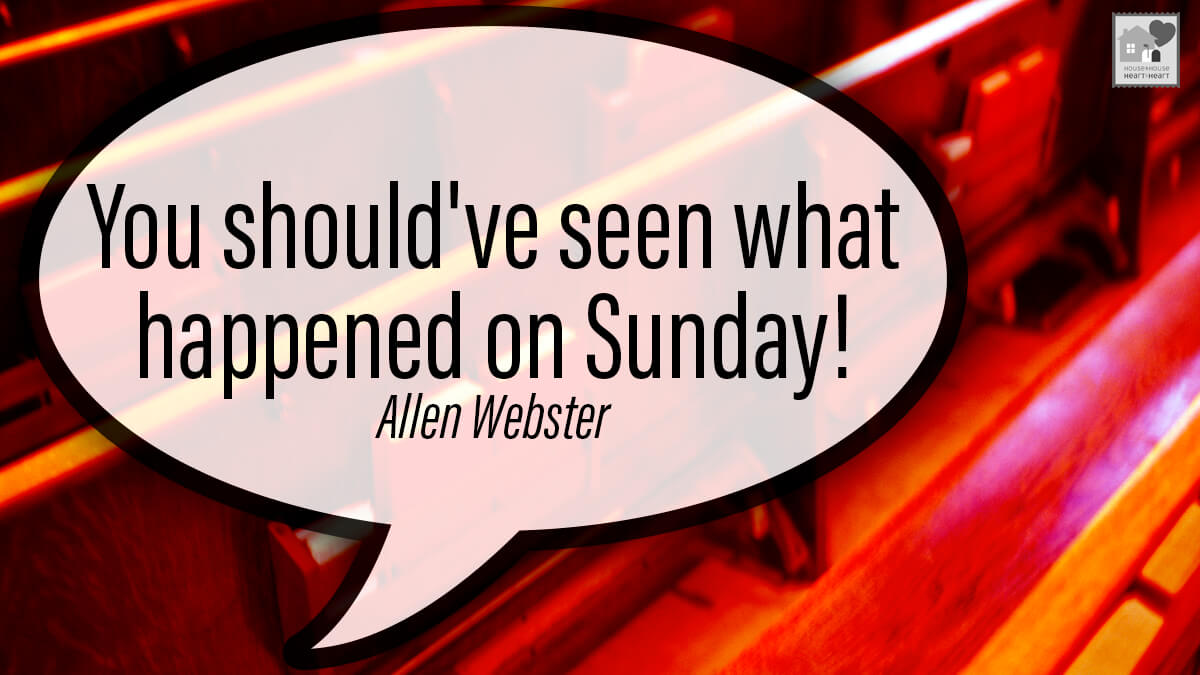 Home Editorial You Should’ve Seen What Happened on Sunday

The view from the pulpit is often interesting. People are so used to watching unresponsive TV and computer screens that they forget preachers can see them! After a while, the unexpected becomes commonplace, and he is able to keep his composure though ‘the walls come tumbling down.’

When Christians gather for worship on the Lord’s Day, something special happens. Their common bond is strengthened as in concert they pour out their gratitude to their Savior. It is a time of worship (Acts 20:7; 1 Corinthians 16:1-2), rejoicing (Psalm 118:24), examination (2 Corinthians 13:5), and fellowship (Acts 2:42-47). It is the week’s beginning and the week’s highlight-nothing else done in the next six days equals it. We understand why Paul delayed a journey for seven days so he could worship the Lord on the Lord’s day with the Lord’s people (Acts 20:6-7).

People of all ages are usually present: babies, children, teens, young adults, families, empty-nest couples, senior saints, widows, and widowers. Each comes to express a common love for an uncommon God; each feels a universal thirst for eternal truth. While worship is formal and congregational, it is neither cold nor impersonal-it is ‘in spirit’ (John 4:24). Personalities are involved, and that can make it interesting. This past Lord’s day we had an uncommon service. You should have seen what happened …

Occasionally someone frowns when a child cries during services, but most of us smile. Parents recognize the need to take a child out to avoid disturbing others, but we don’t want them to feel self-conscious. We are glad it happens! What if no baby had cried Sunday? It would have meant there were no babies there, for all babies cry. No church wants to be that quiet-a tomb is quieter than a nursery, but who wants to worship in a cemetery! A church without children is a church with its best days behind instead of ahead. If no babies had cried Sunday, it might also have indicated that parents saw no need to train the next generation in the Lord’s way (Ephesians 6:4). Good parents want children to learn about God from their first Sunday on planet earth (cf. Matthew 18:1-3; Matthew 19:13-14). They do not want them to be able to remember the first time they came to worship. We know they’ll eventually learn to be quiet, but for now we’re glad to hear them.

A SISTER LEFT EARLY FOR WORK.

In a perfect world, all businesses would close on the Lord’s day so that every person could exalt the name of God in worship (Psalm 34:3). It will be that way in heaven, but it is not that way on earth. Christians are sometimes forced to make decisions. This sister had to be at work before the service ended … what to do?

She could have skipped the service and told others that she ‘had to work.’ She could have slept in, had plenty of time to get ready, left in time to avoid traffic, and got a bite to eat before her shift. But she chose to get up early, be in Bible class, sing God some songs, open her heart to Him in prayer, thank Him for Christ’s sacrifice during communion, give Him part of last week’s check, and listen to His Word. She sat toward the back so as not to disturb others when she got up a few minutes before the sermon ended. Few saw her sermon on priorities (Matthew 6:33; Colossians 3:1-2)-but the preacher did.

As the messenger preached the word (2 Timothy 4:2), hearers ‘searched the scriptures to see whether those things were so’ (Acts 17:11). Far from offending him, it was music to his ears. Jesus found ‘the place where it was written’ (Luke 4:17), and so should we. We joke that our favorite words in a sermon are ‘in conclusion,’ but we find most Christians thirsty for the Word (1 Peter 2:2) and hungering after righteousness (Matthew 5:8). They bring their Bibles, read their Bibles, mark their Bibles, memorize their Bibles, and live by their Bibles.

No one except the preacher probably noticed, but a faithful sister nodded in agreement with a sermon point. She would not speak out to say ‘amen’ like her husband (1 Corinthians 14:34; 1 Timothy 2:11), but she encouraged the preacher just as much without saying a word. Nods also help others in the audience to know that the sermon is expressing both the preacher’s convictions and those of other Christians.

A CHILD DREW A PICTURE.

Any parent knows that ‘out of the mouths of babes’ come profound statements. Often a little child has led God’s people (cf. Isaiah 11:6). Most churches can point to some young people whose example is worth imitating by those much older (1 Timothy 4:12). Last Sunday a child was interested enough to draw a picture of what the preacher was talking about (cf. 1 Timothy 3:15). There is nothing so unusual about that-when a PowerPoint presentation is made, little eyes are always paying attention, and little hands are often copying those words down. They may not yet fully comprehend the concepts, but the seed is planted, the foundation is laid, the base color is on the canvas. One day fruit will ripen, the structure will stand, and the painting will be perfected. And these very notes may become fresh classes and sermons for another generation of children. Some in pulpits now still occasionally use notes written with childish letters on yellowing paper. These have been born again into lessons for those who were not born when the notes were first taken. The truth never ages; it only needs recycling.

A CHRISTIAN WORSHIPPED FOR THE FIRST TIME.

Baptized on Tuesday, a young man offered God acceptable worship for the first time Sunday. God cleansed him from sin, set him in the church, and watched with interest as he bowed his soul in adoration (Acts 22:16; 1 Corinthians 12:28). If the Lord delays His return, and the new Christian’s days are prolonged, that is probably only 1 of 10,000 times he will offer public worship to his Creator (John 4:24; Hebrews 10:25), but it will likely never mean more to God or him than this first service. It was a beautiful step on a long journey, a first note in a grand symphony.

THOSE FROM ‘EIGHT TO EIGHTY’ COMMITTED TO READ THE BIBLE.

About this time each year we encourage each member to read through the Bible. On Sunday, more than a hundred agreed to do so. The youngest is just under eight years old and will read the Bible for the first time. Perhaps this is the first of fifty or more times this mind will have the cleansing Water of Life purify its recesses. The oldest is past eighty and may be reading it for the last time (Hebrews 9:27; James 4:14).

Christian love often finds itself expressed in tears, as it did with Jesus and the early Christians (Luke 19:41; Acts 20:37). God’s Word touched good and honest hearts, and souls responded Sunday to the Lord’s invitation. Joyful tears flowed over ‘one sinner that repenteth’ (cf. JJames 5:16, James 5:19-20).

What’s going to happen this Sunday? Come and see!