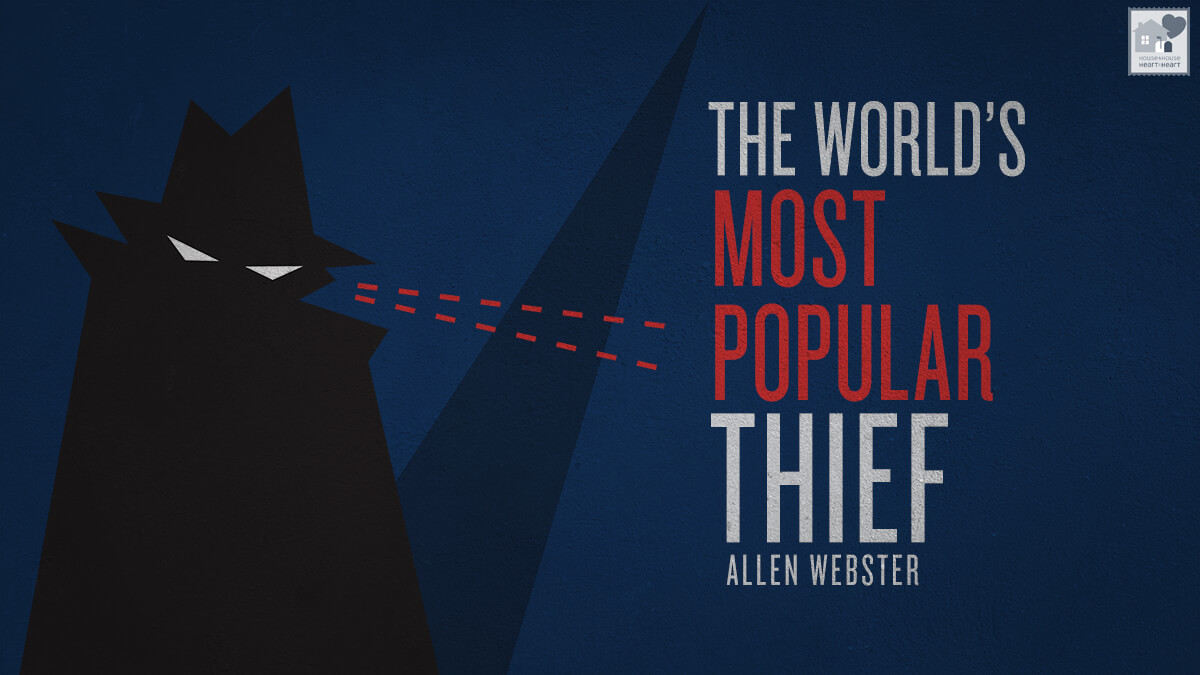 is the one who died on a cross beside Jesus. He is one of the best-known characters in the Bible, although he is mentioned in only three of its 1,189 chapters.

Picture the scene. About noon on Passover Friday, three crosses stood in silhouette along Golgotha’s skyline. An agitated, gloating mob milled about, yelling insults at the lonely figure on the center cross. They looked up at His blood-stained torso, higher still to the blood-covered thorns on His brow, and then over to the blood dropping from the nails in His hands and feet.

Jesus had company in His agony. A thief hanged at His right hand; another at His left. These malefactors joined in the mockery, and “cast the same in his teeth” (Matthew 27:44). As the day waned, though, one thief changed his tune. Luke records:

One of the malefactors which were hanged railed on him, saying, If thou be Christ, save thyself and us. But the other answering rebuked him, saying, Dost not thou fear God, seeing thou art in the same condemnation? And we indeed justly; for we receive the due reward of our deeds: but this man hath done nothing amiss. And he said unto Jesus, Lord, remember me when thou comest into thy kingdom. And Jesus said unto him, Verily I say unto thee, To day shalt thou be with me in paradise (Luke 23:39–43).

That robber had a change of heart, rebuked his companion, and threw himself on Jesus’ mercy. Jesus promised he would be in paradise that same day.

This is one of the most thrilling instances of forgiveness in Scripture. What a final day that man had! He started out condemned in the morning, received grace by noon, and was in glory by nightfall. Matthew Henry says of him:

This malefactor, when just ready to fall into the hands of Satan, was snatched as a brand out of the burning, and made a monument of divine mercy and grace, and Satan was left to roar as a lion disappointed of his prey.

These facts are undisputed. Some, though, appeal to this example as an argument in favor of pardon without baptism. Can people living today be saved like the thief on the cross?

Fact #1: The thief lived under a different law than we live under today.

I will not pay income tax to the federal government because George Washington, Thomas Jefferson, and Abraham Lincoln did not pay it.

It is true these did not pay income tax as we do, but this is because the tax system did not become a law until after their deaths. (But what do you think they would do if they lived today?)

Similarly, religious requirements have changed during the three periods of sacred history.

Abraham, living under Patriarchal Law, was never commanded to observe the Lord’s supper. Today, in the Christian Dispensation, we are not obligated to keep the Passover or to offer animal sacrifices as people were during the Mosaic Dispensation.

The Law of Moses, which did not require baptism, was in force during Christ’s life. He kept it, fulfilled it (Matthew 5:17), and then removed it in death (Colossians 2:14). John had preached baptism in preparation for Christ, but it was not part of Moses’ Law. It is possible (some argue likely) that the thief had been among the multitudes baptized by John, as he referred to Jesus as “Lord” and had some knowledge of the kingdom (Matthew 3:1–6).

Either way, this promise was before Jesus’ death, and thus before the new law, the gospel, came into effect. Jesus’ will is the New Testament. Like our wills, it did not go into effect until after the death of the one who made it:

For this cause he is the mediator of the new testament . . . For where a testament is, there must also of necessity be the death of the testator. For a testament is of force after men are dead: otherwise it is of no strength at all while the testator liveth (Hebrews 9:15–17).

The thief died before the Testament requiring baptism came into effect. Since Jesus’ death, no one has the right to offer salvation on different terms than Jesus stipulated.

Fact #2: While on earth, Jesus had the power to personally forgive sins.

In Mark 2:3–12, a paralyzed man was brought to Jesus. Jesus said, “Son, thy sins be forgiven thee” (2:5). The Jewish leaders believed Jesus to be a blasphemer, for they reasoned (and rightfully so), that only God can forgive sin (2:7).

Jesus, knowing their thoughts, said, “Whether is it easier to say . . . Thy sins be forgiven thee; or to say, Arise . . . and walk. But that ye may know that the Son of man hath power on earth to forgive sins . . . I say unto thee, Arise, and take up they bed, and go thy way” (Mark 2:9–11). In healing the man, Jesus proved His authority to forgive sins.

Jesus was still on earth when He forgave the thief. No one today can be saved like the thief because Jesus is no longer on this earth to personally forgive sins.

Facts #3: The thief died before Jesus said, “he that believeth and is baptized shall be saved.”

It was after His resurrection that Jesus said, “Go ye therefore, and teach all nations, baptizing them in the name of the Father, and of the Son, and of the Holy Ghost”_(Matthew 28:19). Jesus would not utter, “He that believeth and is baptized shall be saved; but he that believeth not shall be damned” (Mark 16:16), until forty-three days after this conversation with the thief.

It would be fifty days before Peter, having received the keys to the kingdom (Matthew 16:18–19) would say, “Repent, and be baptized every one of you in the name of Jesus Christ for the remission of sins, and ye shall receive the gift of the Holy Ghost” (Acts 2:38).

The thief on the cross could hardly be expected to obey commands not even given until after he was in paradise!

If the thief on the cross were here today, he would doubtless tell us, “Whatsoever he says unto you, do it” (cf. John 2:5). – Allen Webster