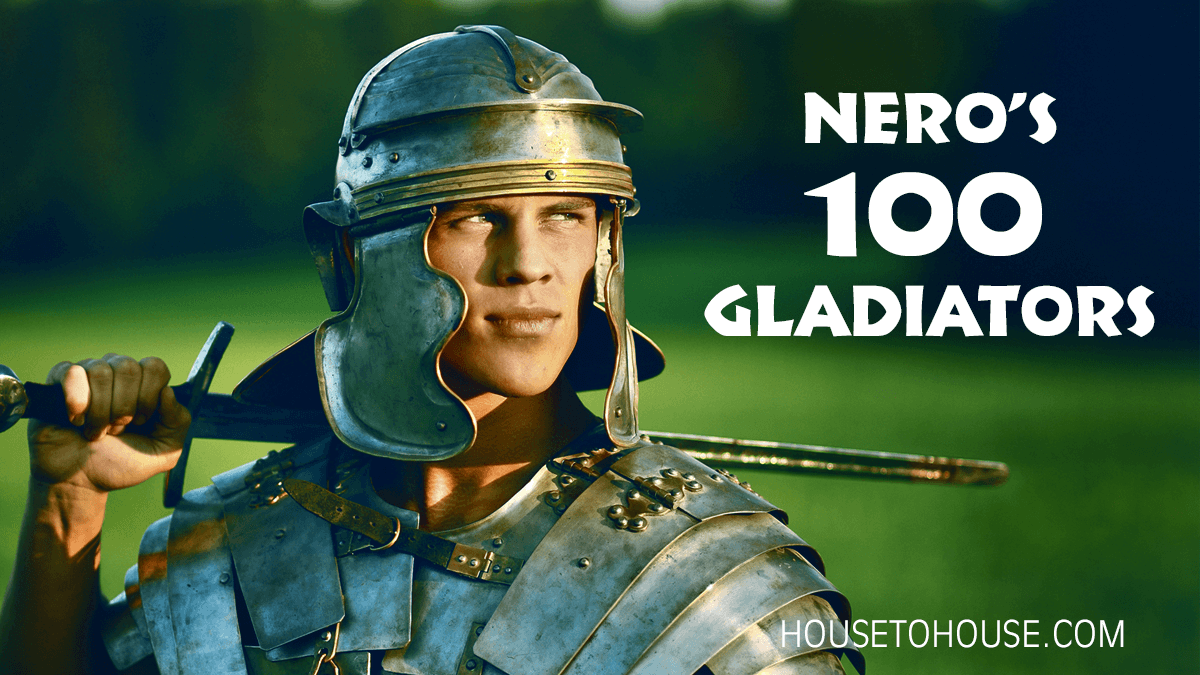 Tertullian (A.D. 155-230) was the first historian to call Nero the “first persecutor of Christians” through wicked, vile, and merciless means.

Nero was Roman Emperor from A.D. 54-68. Tradition says that he had the apostles Peter and Paul killed. History tells of how he would take bodies of Christians (alive or dead), stuff their shirts with wax, and set their bodies afire to provide light in his gardens at night when he was throwing one of his great parties.

Tradition says 100 gladiators served under Nero. These men carried out barbarous acts of murder against the enemies of Nero.

Following the Roman games these gladiators walked the streets chanting: “One-hundred gladiators, Fighters for the Emperor, Fighting for the victor’s crown.”

Tradition says that Nero found out there were Christians in his household. An edict was prepared, “All Christians will be found and put to death.” The man in charge of Nero’s gladiators halfheartedly asked his men, “Are there any Christians in our number?”

They were offered the chance to deny Christ and pledge allegiance to Nero. They refused. The leader did not have the heart to kill his loyal men. He ordered the forty men to take off their clothes and to walk out into the middle of a freezing lake. They were ordered to stay there until they froze to death. Guards were posted all around the lake to ensure that none of the gladiators would escape. All night long the guards keeping vigil could hear the gladiators chanting: “Forty gladiators, Fighters for Christ, Fighting for the Victor’s crown.” Over and over this chant was heard, although growing weaker.

Then, out of the darkness, into the warm glow of the fire, crawled one of the gladiators. He came denouncing Jesus Christ and pledging his allegiance to Nero. Then the voices in the lake started to chant: “Thirty-nine gladiators, Fighters for Christ, Fighters for the Victor’s Crown.”

Upon hearing this, the leader of the group tore off his clothes, waded out into the cold water. There was a moment of silence. There was a splash in the water. Then, one voice, sounding much stronger than the others was heard: “Forty gladiators, Fighters for Christ, Fighting for the Victor’s Crown.”

With the coming of dawn, there were no more voices to be heard. Forty men had perished in the darkness of the freezing icy waters of the night.   —Jess Whitlock

“Blessed is the man that endureth temptation; for when he hath been approved, he shall receive the crown of life, which the Lord promised to them that love him” (James 1:12).