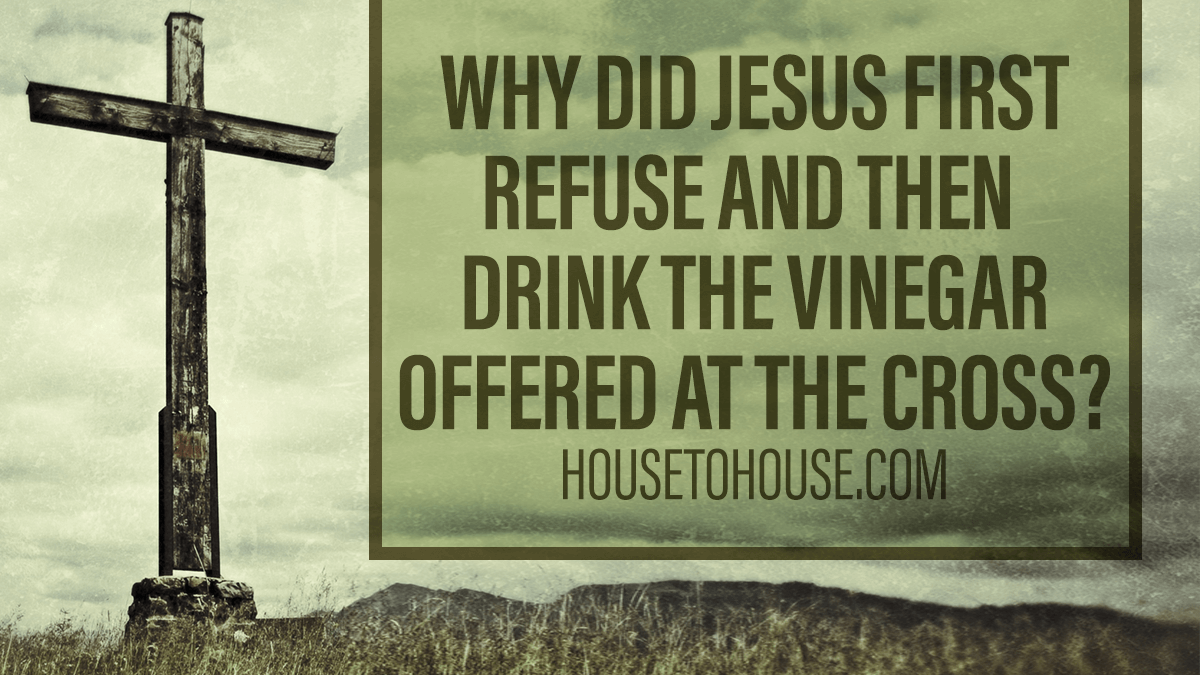 Home Bible Questions Why did Jesus first refuse, and then drink the vinegar offered at...

Matthew records that as Jesus went to the cross, “They gave him vinegar to drink mingled with gall: and when he had tasted thereof, he would not drink” (Matthew 27:34). Mark described the drink as wine mingled with myrrh (Mark 15:23). The drink offered to Jesus was a cheap Roman vinegar wine, which had a drug mixed in to dull the senses. It was the custom of the Romans to offer a man being crucified drugged wine so that he might more easily endure his cross. Jesus refused the wine, however, apparently so that He could go through his suffering with a clear mind.

As He neared death, Jesus said, I thirst (John 19:28). One of the prominent effects of crucifixion was overpowering thirst because of the loss of body fluids through open body wounds and perspiration. David prophesied this Messianic event, saying They gave me also gall for my meat; and in my thirst they gave me vinegar to drink (Psalm 69:21). John understood that Jesus was conscious of fulfilling scripture. After this, Jesus knowing that all things were now accomplished, that the scripture might be fulfilled, saith, I thirst (John 19:28). One of the great heresies in the early church was the idea that Jesus was not really human, but as Jesus fulfilled this scripture, He showed that He was truly human and truly deity.

Now there was set a vessel full of vinegar: and they filled a sponge with vinegar, and put it upon hyssop, and put it to his mouth. When Jesus therefore had received the vinegar, he said, It is finished: and he bowed his head, and gave up the ghost (John 19:29-30). Being at the point of death, Jesus wished to say His final words. His parched lips and throat needed moisture, so he accepted the vinegar.

The vinegar wine was offered to Jesus as they filled a sponge with vinegar, and put it upon hyssop, and put it to his mouth. Hyssop was of extreme significance to the Jews, because it would remind the Jews of the first Passover night when each household among the Israelites in Egypt slew a perfect lamb and put the blood on the doorpost so that the death angel would pass over the houses of the Israelites. Moses had commanded the Israelites, Ye shall take a bunch of hyssop, and dip it in the blood that is in the basin, and strike the lintel and the two side posts with the blood that is in the basin; and none of you shall go out at the door of his house until the morning (Exodus 12:22). It was the blood of the Passover lamb that saved the Israelites from death. On the cross, the perfect Lamb of God gave His life’s blood to save mankind.

His last words from the cross were It is finished. Jesus came to serve and to carry out the will of the Father. In His life, ministry, and death, He perfectly fulfilled the will of His heavenly Father, and made the perfect sacrifice for mankind. Angels before the throne of God praise Christ’s sacrificial love, Saying with a loud voice, Worthy is the Lamb that was slain to receive power, and riches, and wisdom, and strength, and honour, and glory, and blessing (Revelation 5:12).