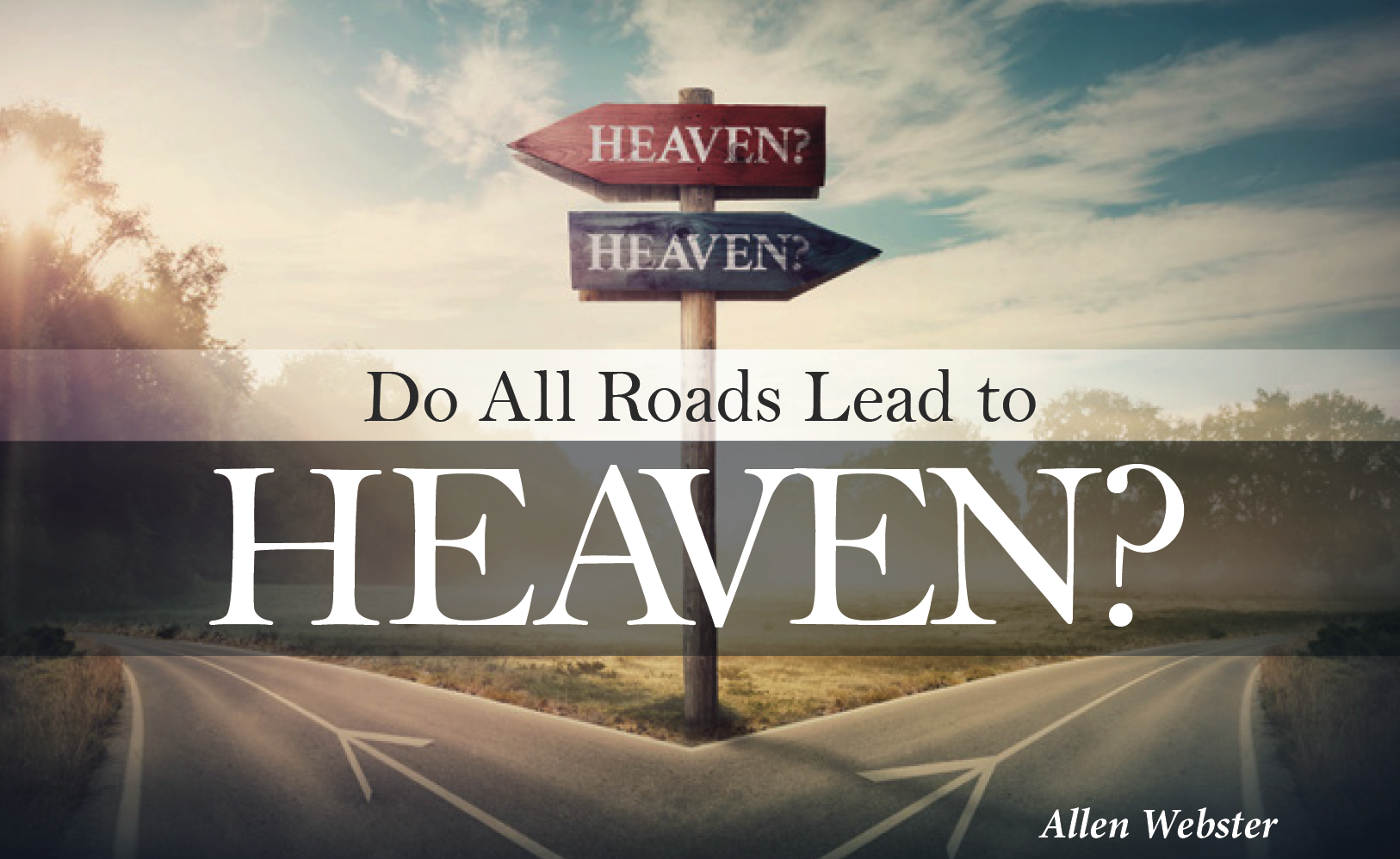 Home Editorial Do All Roads Lead to Heaven?

Two sisters went driving Sunday afternoons with the goal of getting lost. Taking random turns at intersections, trying new roads, going farther and farther afield, they had an adventure each week.  The starting and ending points were the same, but the path was always different.

Is this how the path to heaven is? This is a common view. Dalai Lama XIV said, “People take different roads seeking fulfillment and happiness. Just because they’re not on your road does not mean they’ve gotten lost.” Many believe all religions are essentially alike, different roads to the same heaven. Eventually all—Jews, Buddhists, Hindus, Muslims, Catholics, Baptists, Methodists, Episcopalians, Presbyterians, Lutherans, Mormons (and perhaps even atheists, agnostics, humanists, Communists, and Gentiles)—will wind up together.

The Bible does not always match politically correct culture. Does it teach that all religious roads lead to the same place?

To Say One Path Is as Good as Another Contradicts Common sense and Common Scriptures.

Travelers know that not all roads go where they want to go. If you live in Birmingham, want to go to Atlanta, and take I-22 West, then you will never arrive.

Jesus said, “Enter by the narrow gate; for wide is the gate and broad is the way that leads to destruction, and there are many who go in by it. Because narrow is the gate and difficult is the way which leads to life, and there are few who find it” (Matthew 7:13–14). He reduced life to two options: a difficult, narrow road to heaven, and an easy, broad road to hell. There are only two religions—true and false.

In things less important, people do not think one is as good as another. When one seeks a spouse, is an ugly, mean one as good as a kind, attractive one? If one needs brain surgery, would a pediatrician be as good as a board-certified neurosurgeon? Does one tell a pharmacist any prescription will do?

A godly life differs from a worldly one as light does from darkness (Galatians 5:19–23; Titus 2:11–14). God requires righteousness (Micah 6:8; Matthew 5:20). None shall enter heaven to defile it, including the unbelieving, abominable,  murderers, sexually immoral, sorcerers, idolaters, and all liars (Revelation 21:8, 27).

To Say One Religion Is as Good as Another Insults Jesus.

It is presumptuous for any man to invent a religion and then tell others they can be saved by it, or that they will be condemned if they do not believe it. This is an audacious sin (Psalm 19:13; Romans 10:3; 1 Timothy 4:1; 2 Timothy 4:3–4). It usurps God’s prerogative. Only Jesus can say, “I am the way, the truth, and the life. No one comes to the Father except through me” (John 14:6).

Because of who Jesus is, Christianity is not just another religion. Saying Jesus is one religious leader among others implies He is a mere man. When Peter made that mistake at the Transfiguration, God immediately corrected him, saying, “This is my beloved Son . . . Hear Him” (Matthew 17:5). Buddha, Gautama, the Pope, Mohammed, Confucius, Martin Luther, John Calvin, John Knox, Joseph Smith, Charles T. Russell, Mary Baker Eddy, nor any other religious leader is on Jesus’ level.

What Jesus is doing. Christianity is the only religion with an empty tomb and a living Savior (Matthew 28:6; Acts 1:9). Jesus sits at God’s right hand, blessing people. He saves sinners every day, adding their names to the book of life (Acts 2:47; Revelation 21:27). He prepares each a place in heaven (John 14:2). He invites Christians to come boldly to the throne to request aid (Hebrews 4:16). He helps with temptation (1 Corinthians 10:13), strengthening saints (Philippians 4:13). He cares for churches (Revelation 1:10–2:1), nourishing congregations (Ephesians 5:29). He mediates between God and man and advocates for Christians when they sin (1 Timothy 2:5; 1 John 2:1).

No one will stand before any other founder to be judged from any other book. Jesus is the door to God’s sheepfold (John 10:9). Any person seeking heaven through anyone else follows a destructive thief (John 10:1, 10).

On that great day, a passport will be required showing one has citizenship in the kingdom of heaven (Philippians 3:20; John 3:5; Galatians 3:27). It must be stamped with the name “Jesus.” There is no other name under heaven whereby one can be saved (Acts 4:12). An old song says, “My hope is built on nothing less than Jesus’ blood and righteousness, I dare not trust the sweetest frame, but wholly lean on Jesus’ name.”1

To Say One Church Is as Good as Another Discards Four Thousand Years of God’s Work.

God’s omniscient mind planned the perfect church for humanity. For four thousand years (the entire Old Testament), His omnipotent hand laid its groundwork in history (Galatians 4:4), religion (Galatians 3:24), and expectation (Matthew 11:2–3; John 4:25). In ad 33, His eternal Spirit brought it to fruition in a grand opening for the ages (Acts 2).

How, then, does God feel when people say one church is as good as another? Does He not care that people reject the church He made them for one they like better or one handed them by family tradition? To say His is no better is to say that man is as wise as God (1 Corinthians 1:19–20). As He told Samuel, “They have not rejected you, but they have rejected Me, that I should not reign over them” (1 Samuel 8:7).

Christ’s church (the church of Christ) is the only one revealed from heaven (Matthew 16:18). God’s eternal purpose was to save man in the church (Ephesians 3:10–11).

When man sinned in Eden, four thousand years before Christ, God began in earnest to prepare for the church (Genesis 3:15).

Two thousand years before, He promised Abraham to bless all nations through him (Genesis 12:1–3), which was fulfilled in the church (Galatians 3:7).

Since Christ originated the first church, men have started thousands more. Does Jesus accept every denomination man invents and calls “Christian”? He accepts none of them (Matthew 15:13). Why would He accept a new church to compete with His and further confuse humanity? (1 Corinthians 14:40). Jesus built (Matthew 16:18), died for (Acts 20:28), and loves (Ephesians 5:25) only His own church.

No one can modify Christianity and then expect to be saved by his concoction. Preachers must preach all—and only—the counsel of God (Acts 20:20; 2 Timothy 4:2). Elders can bind/loose on earth only what God has already bound/loosed in heaven (Matthew 16:19). Changing—adding to, subtracting from—the New Testament removes God’s blessing (Galatians 1:6–9; Revelation 22:18–19). Only the gospel has power to save (Romans 1:16).

No man was ever given license to begin a new kind of church, from the days of the apostles till now (cf. Colossians 3:17; 2 Timothy 2:2). Christians have authority only to establish new congregations of His church (Acts 9:31). To be acceptable to Jesus, a church plant must be identical to His church in

Only one church matches all these. “Stand in the ways and see, and ask for the old paths, where the good way is, and walk in it” (Jeremiah 6:16).

In Greek legend, the Minotaur was a monster that devoured children. It lived underground in a maze of caves and passages. Young Theseus volunteered to slay it, took his sword, went into the darkness, and killed the beast. People feared he would never make it back. He had taken many turns, gone through many gates. His beloved, however, was confident, for before he had left, she had tied a rope around their waists. He had only to follow the rope.

This world is a dark maze called sin. Most people have made many wrong turns. God has thrown out a lifeline, the gospel. Take hold of His rope of hope.