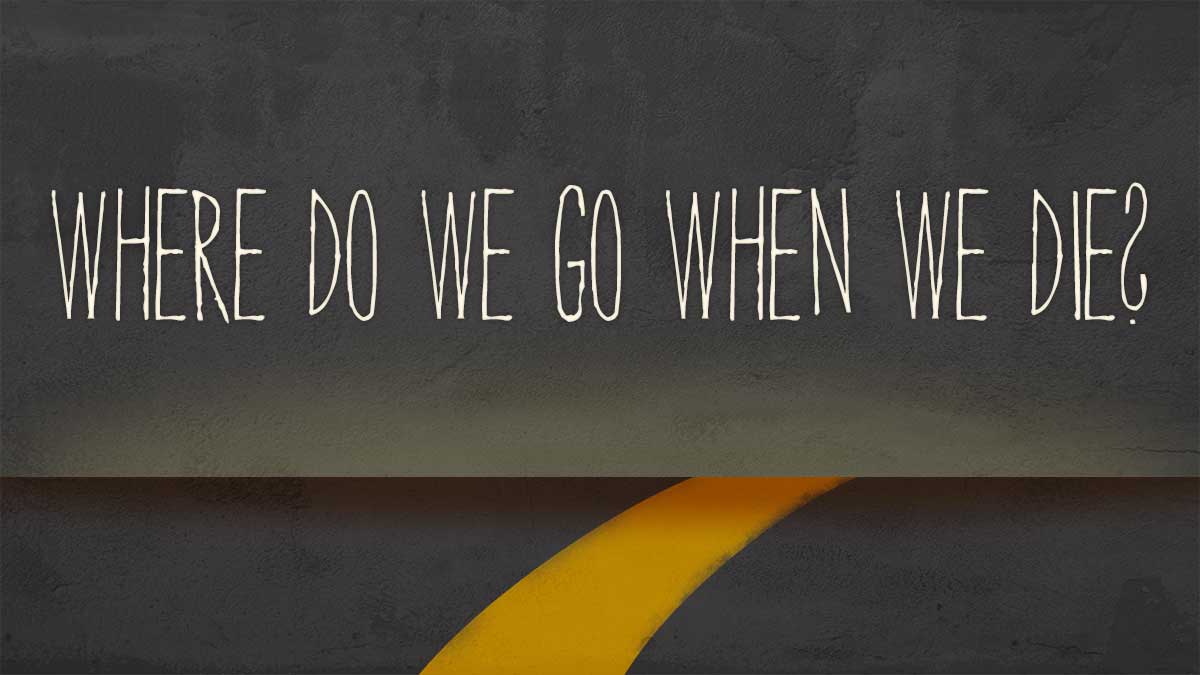 Home Editorial Where do we go when we die?

All cultures have shown interest in life after death. Egyptians designed pyramids for their dead. Chinese built huge emperor tombs. Vikings dressed fallen warriors and released them to the wind in burning ships. Crusaders in the Middle Ages believed they gained a more favorable afterlife if they died in battle, as did the Japanese kamikazes later. American Indians buried weapons and tools with their dead, for use in the Happy Hunting Ground.

Men also feared death. King Louis XV forbade servants to mention death in his presence. A Chinese superstition held that mentioning death invites it. People now tend to ignore death or try to postpone it as long as possible. Woody Allen quipped: “It’s not that I am afraid to die. I just don’t want to be there when it happens.”

Yet nothing in life is as certain. George Bernard Shaw observed that “the statistics about death are very impressive—one out of one dies.” The Bible says, “It is appointed unto men once to die, but after this the judgment” (Hebrews 9:27). The undertaker who signed his correspondence, “Eventually yours” was right.

What does the Bible say about man’s journey to eternity?

We cannot know what happens to a man when he dies unless we know what man is when he begins. Genesis one shows that humans differ from all other created beings. Man is a triune being. He has a body, soul (life), and spirit (1 Thessalonians 5:23; Hebrews 4:12). Animals have a body and life, but no eternal spirit. As John Piper noted, “What separates man from whales and dolphins and chimpanzees is not mutations and chemicals, but personhood in the image of God.”

Each of Adam’s descendants has two dimensions: one spiritual and one physical. God made Adam’s body from dust, but that did not make him human. That happened when God fused him with His likeness and breathed into him his soul (Genesis 2:7; cf. 1:26–27; Matthew 10:28).

Jesus said if we believe in Him, we will not die (John 11:26). That is a remarkable thought, but what does it mean? Christians end up in cemeteries like atheists, Buddhists, and Jews. Let’s explore the next stage of man’s existence.

From an evolutionary worldview, death is the end. Humans simply go out of existence. They feel nothing, know nothing, are nothing. Human death is not extinction, though.

From a biblical worldview, death is simply a transition from this seen world to an unseen one. The definition of death is “the body without the spirit” (James 2:26). At death the soul separates from the body; then “the dust”—body—returns “to the earth as it was: and the spirit shall return unto God who gave it” (Ecclesiastes 12:7). The biological part dies; the spiritual part continues.

At the moment of death, God sorts people into two groups—the saved and the lost. The account of the rich man and Lazarus (Luke 16:19–31) shows that after death:

Death is as necessary for man’s progress as hatching is for a chick or leaving a cocoon is for a butterfly. To live in an eternal realm, we need a spiritual body (1 Corinthians 15:50).

Although our bodies eventually return to dust (Genesis 3:19), they are not forever lost. The doctrine of bodily resurrection is a hallmark of Christianity. God dedicates an entire chapter to it (1 Corinthians 15; cf. Acts 4:1–2), saying, “As in Adam all die, even so in Christ all shall be made alive” (15:22).

On the world’s last day, every grave will be emptied and the sea will give up its dead (John 5:28–29; Revelation 20:13). Those alive at Jesus’ return will be “changed, in a moment, in the twinkling of an eye, at the last trump: for the trumpet shall sound, and the dead shall be raised incorruptible” (1 Corinthians 15:51–52). Our resurrected bodies will be immortal—they will never decay, suffer injury, grow old, get sick, or die (1 Corinthians 15:42–55). The body of our humiliation will be made like Christ’s glorious body (Philippians 3:20–21).

Jesus will bring our immortal spirits back with Him to enter those resurrected bodies (1 Thessalonians 3:13; 4:13–17).

John pictures the judgment scene: “I saw the dead, small and great, stand before God; and the books were opened: and another book was opened, which is the book of life: and the dead were judged out of those things which were written in the books, according to their works . . . And whosoever was not found written in the book of life was cast into the lake of fire (Revelation 20:12–15; cf. Matthew 25:31–33).

At the Judgment, God’s grace will reward Christians for good deeds (Matthew 10:41–42; 16:27) and God’s justice will punish unbelievers for sin (Galatians 5:21; 1 Corinthians 6:9–10). Paul explained, “For we must all appear before the judgment-seat of Christ; that every one may receive the things done in his body, according to that he hath done, whether it be good or bad” (2 Corinthians 5:10).

Eternity could be summed up with these words: “The Lord God omnipotent reigneth” (Revelation 19:6).

There are only two destinations in eternity: heaven and hell. There are three things associated with the “resurrection of damnation” (John 5:29):

We naturally shrink from such thoughts. Thankfully, we have the awesome privilege of determining where we will go in eternity (Philippians 2:12). What happens to the soul when we die depends on what happened to it before we died. If we are washed by Jesus’ blood, we need not fear death (Revelation 1:5; 7:14; Acts 22:16; Hebrews 2:14–15). But we must die “in the Lord” to be blessed upon death (Revelation 14:12–13). To die in the Lord, we must get into and stay in the Lord. Paul wrote, “For ye are all the children of God by faith in Christ Jesus. For as many of you as have been baptized into Christ have put on Christ” (Galatians 3:26–27). God does not arbitrarily fix our destination; all “good people” do not necessarily go to heaven; American citizenship is not synonymous with heavenly citizenship. We do not accidentally wake up in heaven without preparing to go there. Decisions determine destiny.

Heaven will bring complete physical and emotional healing (Revelation 21:4). Our resurrection bodies will be freed from disability, infirmity, and disease. Our emotional scars will be removed, and we will be free from all neuroses, complexes, and symptoms of depression. We go home with the Lord to enjoy, praise, serve, rejoice, sing, and celebrate forever (1 Thessalonians 4:17). The Bible describes going to heaven as:

It is little wonder the Bible says, “Precious in the sight of the Lord is the death of his saints” (Psalm 116:15). God receives His children as a father encloses a child in his arms (Acts 7:54–60). Imagine!

God is still taking reservations. Come, go home with us.