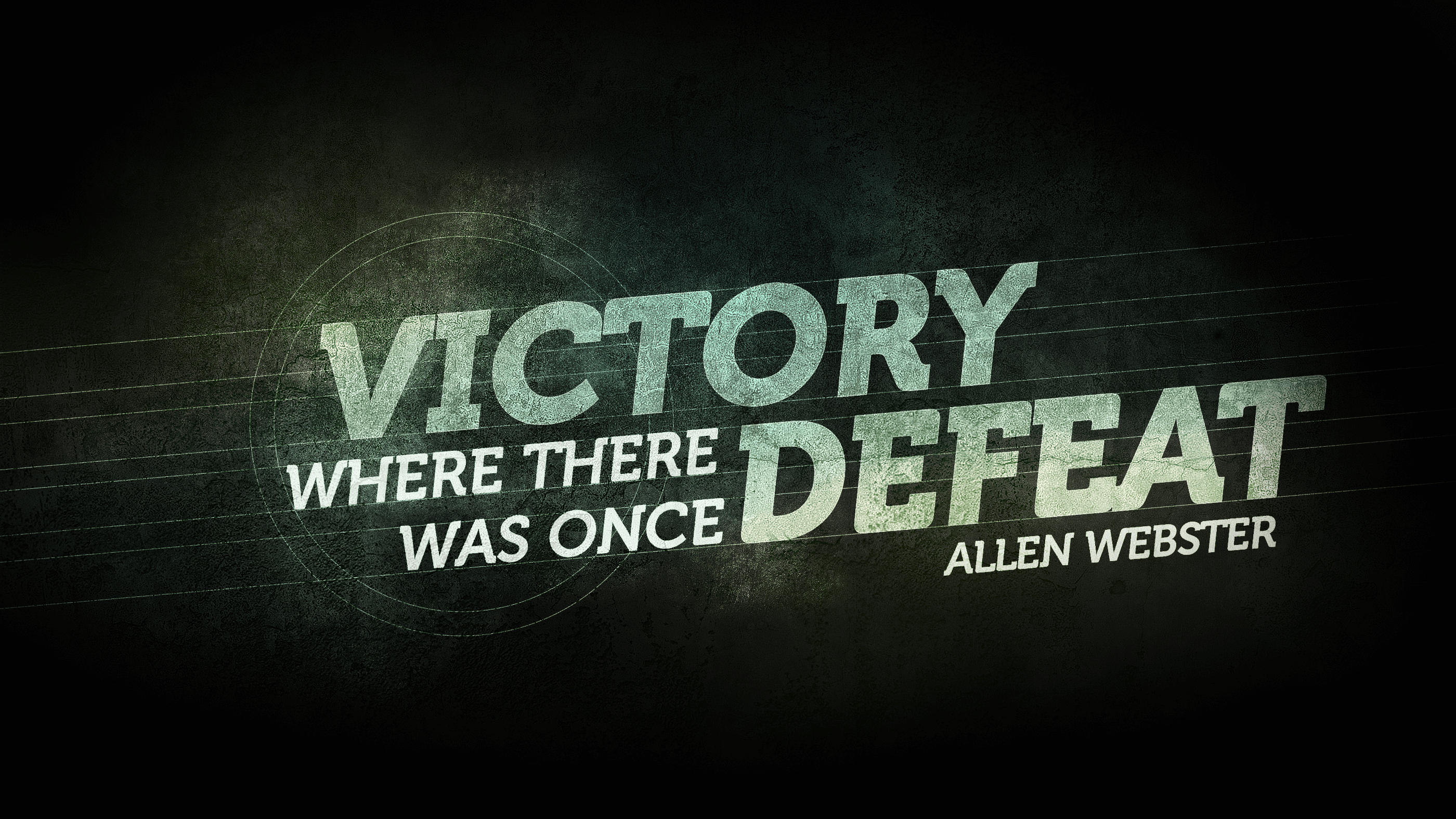 Home Editorial Victory Where There Was Once Defeat

As one year closes and another opens to us, it is a good time to pause and take spiritual inventory as we consider personal improvements. Paul wrote, “Examine yourselves as to whether you are in the faith. Test yourselves” (2 Corinthians 13:5).

Think back to the old Bible story of Joshua. Under this great commander, God’s army suffered only one defeat in conquering all of Canaan. This battle was in a small place called Ai. It was not a stronghold, but Israel “self-destructed” because they had sin in the camp. Achan’s covetousness caused about thirty-six good men to die (Joshua 7:1–26). God would not fight for Israel until they corrected the problem. The offender was stoned, and they went back to the battlefield. As the soldiers waited in the hills around Ai for the signal to attack, they must have wondered, “Can there be victory where there was once defeat?” The answer was “yes”—they won the battle in decisive fashion the second time. Remembering four things can bring us a victory at our “Ai.”

Christianity has suffered its apparent losses. Jesus was killed; the apostles were beaten; the church was scattered. But God always won in the end! Jesus was resurrected (Mark 16:6); the apostles carried the gospel to the whole world (Colossians 1:23); the church multiplied in number (Acts 9:31).

Christians have setbacks, too. You may have made mistakes, gone back to a bad habit, disappointed your family, failed at your job, or even backslidden from the Lord. We all make mistakes. One church bulletin reported that “everyone enjoyed the sining” (I hope the letter left out was a g and not an n!). The Firm Foundation once listed the Golf Course Road church of Christ in Midland, Texas, as “God’s Course Road.” (God’s road can be difficult at times.) Around the first of the year, a sign advertising a local barbershop seemed to have lost a Y; it read, “Happy New Ear.” (Hopefully the barber had not made a serious mistake!) Someone wished:

I wish that there were some wonderful place
Called the Land of Beginning-Again
Where all our mistakes and all our heartaches
And all our poor selfish grief
Might be dropped, like a shabby old coat, at the door,
And never put on again.

There is such a place. That place is here. There is such a time. That time is now (2 Corinthians 6:2). Victory can follow defeat! We all need to start over at times. Remember the throne set in heaven and the voice which cries, “Behold, I make all things new” (Revelation 21:5)? The Bible speaks of the new covenant. The Old Covenant was a sentence of death (Galatians 3:10), so Christ gave us a new one (Matthew 26:28). Under it, He forgets our sins (Hebrews 8:12). The Bible speaks of the new man. Life can be made over again (Galatians 6:15; Philippians 1:6). Jesus is the “Alpha and Omega, the Beginning and the End” (Revelation 1:8). The Bible speaks of a new way (Hebrews 10:19–20) that leads to a new Jerusalem (Revelation 3:12). Share in Paul’s optimism: “Therefore, if any one is in Christ, he is a new creation; old things are passed away; behold, all things are become new” (2 Corinthians 5:17).

Joshua and Israel made sure that they had corrected the “Achan problem” before they returned to Ai. All of us make mistakes, but it is foolish to keep making the same mistakes. The Greeks used to say that stumbling is a human flaw, but it is disgraceful to stumble against the same stone twice. David Lusk tells the story of two hunters who flew deep into remote Canada in search of elk. When they started home, their pilot saw their four elk and told them the plane could carry only two. They protested, “The plane last year was exactly like this one and we had six elk then,” The pilot reluctantly agreed to try. They loaded up and took off. Unfortunately, the plane did not have sufficient power to climb out of the valley with all that weight, so they crashed. As they stumbled from the wreckage, one hunter asked the other if he knew where they were. “Well, I’m not sure,” he said, “but I think we are about two miles from where we crashed last year!”

We should learn from “last year’s mistakes” and not make them “this year’s mistakes.” We should put away childish things (1 Corinthians 13:11) and remove the besetting sin (Hebrews 12:1–2). Life is a struggle, but crashing in the same forest is inexcusable. We may need to get a new set of friends (1 Corinthians 15:33), or put some good influences in the place of old habits (1 Peter 2:11). Are we willing to change our lives for the good of our souls? Or will we just go on sinning and watching ourselves crash and burn every year? For most of us, it is not a new road we need but a new determination with which to travel the way that lies before us.

Championship seasons are rarely undefeated seasons. The NFL has had four undefeated season. The NBA and Major League Baseball have had none. Tiger Woods is considered by many as the greatest golfer of all time, and he does not always win. He was 60th in his first tournament, the Greater Milwaukee Open in ’96, and then won the Las Vegas International and the Walt Disney World Classic that year and has enjoyed eighty PGA tour victories since then.

Every Christian makes mistakes. Peter made some serious blunders (cf. Luke 22:45–61) but he bounced back (cf. Acts 2). So can we! If you have forsaken the Lord, do not give up hope. You can return and live the Christian life. It is possible. If you have lost your fervor for Christ, you can get it back. If the devil has led you down sin’s road, you can return—just as the prodigal did (Luke 15). If you are defeated and despondent, remember Ai shows there can be victory where there was once defeat.

There can be victory where there was once defeat in breaking bad habits. Many Christians have finally conquered smoking, bad language, procrastination, gossip, and alcohol addiction by saying, “I can do all things through Christ who strengthens me” (Philippians 4:13; cf. 2 Corinthians 3:4–5). Jesus promised, “I am the vine, you are the branches. He who abides in Me, and I in him, bears much fruit; for without Me you can do nothing” (John 15:5).

There can be victory where there was defeat also in soul winning. Keep on inviting that family member or friend to church services. The next invitation may be the one he accepts. The next sermon may be the one that reaches her. The next Bible study may convert him. Their souls are too valuable to give up (Matthew 16:26). Love keeps on keeping on. “Persistence breaks down resistance.”

Abraham Lincoln was asked during the Civil War, “Are you sure God is on your side?” His thoughtful reply was, “I am not so concerned if God is on our side, but whether we are on God’s side.” Christians need not worry over who will win. God will win. We need to concern ourselves with being “on His side.”

As we contemplate important changes in our spiritual lives, let’s think on these powerful verses: “And now why are you waiting? Arise and be baptized, and wash away your sins, calling on the name of the Lord” (Acts 22:16). “If God is for us, who can be against us?” (Romans 8:31). “But thanks be to God, who gives us the victory through our Lord Jesus Christ” (1 Corinthians 15:57). “Yet in all these things we are more than conquerors through Him who loved us” (Romans 8:37). “Confess your trespasses to one another, and pray one for another, that you may be healed. The effective, fervent prayer of a righteous man avails much” (James 5:16). “Now thanks be to God who always leads us to triumph in Christ” (2 Corinthians 2:14).

Enjoy a “victory in Jesus” on an old battleground this year!

2 1972 Dolphins in the Super Bowl era. (The Bears went undefeated in the 1934 regular season but lost the championship game.)