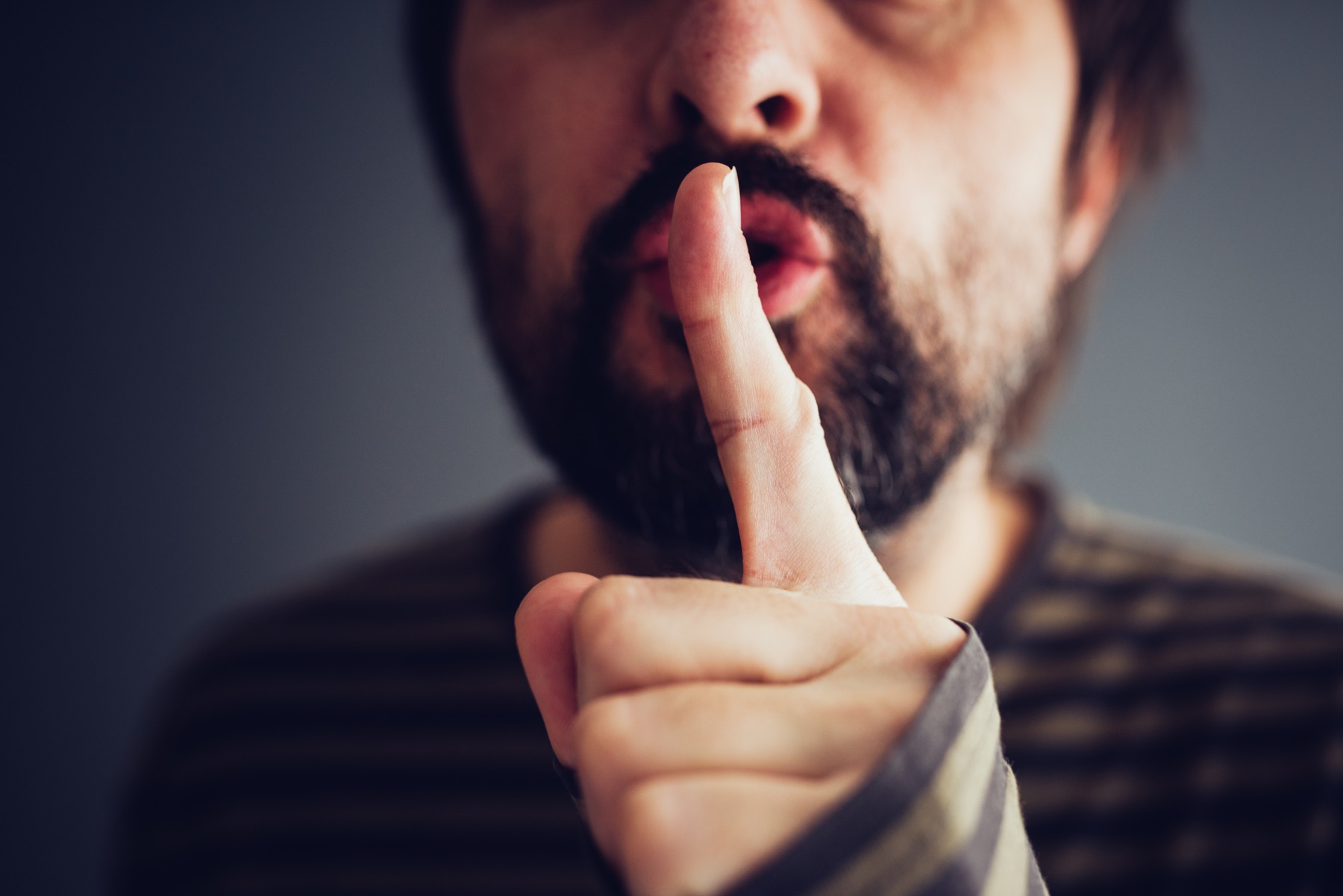 Home Editorial The Problem Everybody Has but Nobody Talks About

Hans Christian Anderson’s short story “The Emperor’s New Clothes” is about two weavers who promised an emperor new clothes that would be invisible to anyone unfit for his position. They made no clothes at all, but the king pretended to wear them lest he be thought inept. When he paraded before his subjects, no one dared say they saw no clothes, for fear that they would be thought stupid. Finally, a child cried out, “But he isn’t wearing anything at all!”

That story illustrates the fact that there are obvious things people are unwilling to acknowledge. Some will never admit a mistake. Others will not acknowledge being overweight or having an anger or addiction problem. Others deny a medical condition until it is too late to treat it.

There is another elephant in the room—or naked emperor. Everyone has a condition, but nobody wants to talk about it. That condition is sin. We have all messed up. All is not right between us and our Maker, because we offended Him with bad behavior. Like sheep, we have gone astray (Isaiah 53:6). Sin is a barrier between us and heaven (Isaiah 59:1–2).

We find these attitudes regarding everybody’s problem.

Problem? What Problem? Some deny that there is such a thing as sin. Many philosophers, humanists, and psychologists allege that sin is the concoction of myth-making religious fanatics to keep people from having fun, or by preachers to keep themselves in business. Man does not get to define reality; the ultimate source of truth is God: “I, the Lord speak righteousness, I declare things that are right” (Isaiah 45:19; cf. Psalm 19:7–10; John 14:6). God said sin is a reality. Whatever a skunk is called, it smells the same.

Sin is a three-letter Anglo-Saxon word capable of covering the whole gamut of human failure. In the Old Testament, to sin meant “to stumble and fall” or “breaking one’s word, disloyalty, treason—a breach of the covenant with God.” Sin was saying, “I want to do this, although I know God forbids it.” In the New Testament, sin is less legal but no less lethal. It means “to miss the mark; fail to achieve a goal.”

Some say sin is diminishing, and that given time to evolve, man will get away from “the tiger’s claw, the tooth and the fang, and the doubled fist.” History shows humanity is not stumbling upward. Society’s condition is worse than it was a century ago, and the equivalent of a millennia back. Houses have locks, businesses have alarms; towns have police; cities have judicial courts and overcrowded prisons. The FBI’s crime clock says an aggravated assault occurs every 39 seconds and a car is stolen every 40.9 seconds; someone commits a robbery every 1.7 minutes, a rape every 3.9 minutes, and a murder every 30.5 minutes.

Others believe sins are only big things—like murder, rape, and robbery—and thus they are not guilty. Most admit mistakes but see them as inconsequential: “I’m not perfect, but I’m a pretty good person. I’m as good as most—and better than a lot. I’m okay.” They pat themselves on the back and move on to other thoughts. Isaiah had done none of these, but he said, “Woe is me, for I am undone! Because I am a man of unclean lips, and I dwell in the midst of a people of unclean lips” (Isaiah 6:5). Peter said, “Depart from me, for I am a sinful man, O Lord!” (Luke 5:8).

Philosopher Jean-Jacques Rousseau (1712–1778) wrote in My Confessions: “No man can come to the throne of God and say, ‘I am a better man than Rousseau.’ Let the trumpet of the last judgment sound when it will. I will present myself before the sovereign Judge with this book in my hand and I will say aloud, ‘God, here is what I did, here is what I thought, and this is what I was.’ No man is a better man than Rousseau.” Many would say that he was brilliant, and he left his mark as a thinker and writer, but he was an embarrassment to humanity. One described him as “perhaps the most despicable character in all philosophy and literature.” As a boy, he stole a ribbon and blamed a servant girl who was punished. He fathered at least five illegitimate children with different women whom he abandoned to charity homes. He was mean, argumentative, treacherous, hypocritical, and blasphemous. Yet he felt he was ready to face God.

No man is good enough to stand before God, be his own advocate, and walk into glory on his merits. The best man inevitably falls short of the Lord’s expectations and glory (Romans 3:23). Jesus spoke of a Pharisee who prayed: “God, I thank You that I am not like other men—extortioners, unjust, adulterers, or even as this tax collector. I fast twice a week; I give tithes of all that I possess” (Luke 18:10–12). He felt he was good enough. Sin was not an issue for him. God saw it differently. Jesus said he went home unforgiven (18:14). By contrast, the publican hero in this parable said, “God, be merciful to me a sinner!” (Luke 18:13).

A self-righteous person who remains so has no hope of salvation (Matthew 5:3–4). Feelings are not a reliable test of truth. A person may be convinced he is in good health, while a deadly cancer grows undetected inside him. One may feel good about a business transaction but later find he was swindled. Feelings may mislead spiritually—but Scripture does not (James 1:25). Paul felt he was serving God when he was the “chief of sinners” (Acts 26:9; 1 Timothy 1:15).

I’ll never admit I have a problem. “There is none righteous, no, not one” (Romans 3:10). Why does Paul add “no, not one”? Because someone will always say “except for me” (cf. Psalm 14:1–3). Some are proud. Some are stubborn (Luke 10:10–15). Some are hostile to the gospel because they see it as intellectually beneath them. Solomon said, “Pride goes before destruction, and a haughty spirit before a fall” (Proverbs 16:18). The Laodiceans had a good opinion of themselves but needed to repent (Revelation 3:14–22). The pride of their heart had deceived them (cf. Obadiah 1:3).

Stubborn pride keeps many from confessing sin. Barnhouse wrote, “Man stands before God like a little boy who promises with crying and tears that he has not been anywhere near the jam jar and who with an air of outraged innocence pleads the justice of his position in total ignorance of the fact that a spoonful of the jam has fallen on his shirt, under his chin, and is plainly visible to all.” Do not be ashamed to repent (Romans 1:16; Mark 8:38). It is the wise and sensible thing for an intelligent person to do.

In Robinson Crusoe (1719), Daniel Defoe relates how, in spite of his father’s pro-test and his mother’s tears, Crusoe ran away to the sea from his home in York. On his first voyage, he wrecked off Yarmouth and barely escaped drowning. He saw his folly but was ashamed to go home, lest his friends mock him. Defoe concluded that men are not ashamed to sin but are ashamed to repent; not ashamed to do that of which they ought to be ashamed, but ashamed to do that which is their hope and rescue.

God is longsuffering, giving man time to repent (2 Peter 3:15; Revelation 2:21). God gave David time and he eventually came back. Then he wrote: “Blessed is he whose transgression is forgiven, whose sin is covered. Blessed is the man to whom the Lord does not impute iniquity, and in whose spirit there is no deceit. When I kept silent, my bones grew old through my groaning all the day long. For day and night Your hand was heavy upon me; my vitality was turned into the drought of summer. I acknowledged my sin to You, and my iniquity I have not hidden. I said, ‘I will confess my transgressions to the Lord,’ and You forgave the iniquity of my sin” (Psalm 32:1–5).

It’s Not My Fault. The three most-popular sports in America are Shooting the Breeze, Jumping to Conclusions, and Passing the Buck.

Some blame God. “God made me this way. I cannot help it.”

Some blame others. It is easy to transfer guilt to another. Sinners blame bad behavior on parents, society, drugs, poverty, and friends. When God asked Adam if he had eaten the forbidden fruit, he replied that it was the fault of “the woman whom You gave to be with me” (Genesis 3:12). Eve said, “The serpent deceived me” (3:13). Amnon raped his half-sister, Tamar. She resisted, but he overpowered her (2 Samuel 13:14–15). He then hated her. Why? It was easier than hating himself. Liars hate their victims (cf. Proverbs 26:28). Why? It feels better than taking responsibility.

To accommodate this thinking, a popular “gospel” today removes conviction of sin (repentance) from the plan of salvation (cf. 2 Timothy 4:1–5; Galatians 1:6–10). It tells sinners to go in peace and be happy that Jesus died for them and made everything right with God. This cries, “Peace, peace! When there is no peace” (Jeremiah 6:14; 8:11). It is essential to reprove the lost (Ezekiel 3:17–21; 2 Timothy 4:2). Look at how often Jesus first showed a questioner how little he knew or how wrong he was before answering a question and presenting salvation (cf. Luke 11:37–52). The wicked turn against the reprover (Proverbs 9:7–8), but the wise appreciate it (Psalm 141:5; Proverbs 28:23).

Leave me alone, party pooper. Some are defensive about sin. They love a pet sin—or several—too much to give it up, even for heaven. Man’s problem often is not that he does not have light, but that he loves darkness. Jesus said, “This is the condemnation, that the light has come into the world, and men loved darkness rather than light, because their deeds were evil” (John 3:19). Paul even spoke of those who approve or enjoy of the sins of others (Romans 1:32).

The Bible says much about loving sin (2 Peter 2:15; Psalm 52:3–4). Some are “lovers of pleasure rather than lovers of God” (2 Timothy 3:4). People love what they find pleasure in—fishing or football, spending or sleeping, talking or tasking. There is also pleasure in unrighteousness (2 Thessalonians 2:10–12) and sin (Hebrews 11:25). Sin feels good; otherwise, nobody would do it. Whoever put “sin” on his to-do list for the day?

To overcome sin, we must learn to hate sin. Salvation becomes a battle of who wins our hearts. “Do not be conformed to this world but be transformed by the renewing of your mind” (Romans 12:2). Will we love and serve God, or love sin and serve Satan? It is a matter both of loving and hating the right thing: