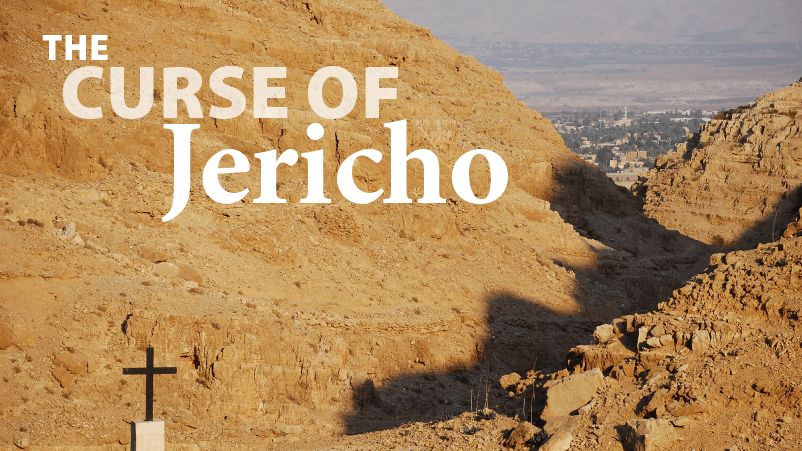 “Then Joshua charged them at that time, saying, ‘Cursed be the man before the Lord who rises up and builds this city Jericho; he shall lay its foundation with his firstborn, and with his youngest he shall set up its gates.’” —Joshua 6:26

“In his days Hiel of Bethel built Jericho. He laid its foundation with Abiram his firstborn, and with his youngest son Segub he set up its gates, according to the word of the Lord, which He had spoken through Joshua the son of Nun.” —1 Kings 16:34

There they stand in the smoking ruins of what was left of Jericho. The Israelites had marched, shouted, blown, slaughtered, and burned. What does God want them to do now? Actually, it is what He does not want them to do that is important. He commands them never to rebuild the city that He had destroyed.1 Jericho was very pleasantly situated, and its nearness to the Jordan was an advantage that would tempt succeeding generations to build on the same spot. Nonetheless, they were warned of what would happen to one who decided to rebuild the city. His oldest son would die when he began the work, and if he persisted, he would attend the funeral of his youngest son when he finished it.2

About five hundred and thirty years later (ca. 850 bc), during the reign of King Ahab, a man named Hiel3 of Bethel rebuilt Jericho. Just as God had said, when he laid the foundation, he lost his firstborn son (Abiram); and when he set up the gates, he lost his youngest son (Segub) (1 Kings 16:34). What a sacrifice to make for a city!

It is interesting and instructive to place ourselves mentally in the position of this man from Bethel. What possibly could have been behind Hiel’s tragic mistake?

HIEL TEACHES US THE DANGER OF IGNORANCE

Hiel could have been ignorant of this warning. He might have grown up in a family where the Scripture was not read. He could have slept during Sabbath classes and misbehaved during temple worship services. He might have been sick the day that Joshua 6:26 was studied. Nobody may have cared enough to warn him when he started building on the old Jericho site. They might have reasoned, “Well, I don’t want to get involved. I’m sure he’s read Joshua’s curse. He’s made up his mind. It’s none of my business anyway. He can make his own mistakes.”

HIEL TEACHES US THE UNFAILING TRUTHFULNESS OF GOD’S WORD

Not one jot or tittle of this curse passed away. Abiram, the firstborn, and Segub, the youngest, both died, the one at the laying of the foundation, the other at the setting up of the gates of the city. “The testimony of the Lord is sure” (Psalm 19:7). The One who was called Truth said, “Heaven and earth will pass away, but My words will by no means pass away” (Matthew 24:35; cf. John 14:6). His Father said, “My covenant I will not break, nor alter the word that has gone out of my lips” (Psalm 89:34). We can trust in this fact: “God is not a man, that He should lie, nor a son of man, that He should repent.  Has He said, and will He not do? Or has He spoken, and will He not make it good?” (Numbers 23:19). History shows an unbroken fulfillment of the Scriptures.

HIEL TEACHES US THE STRONG INFLUENCE OF UNHOLY GOVERNMENT

HIEL TEACHES US THE POWER OF UNBELIEF, ONCE IT IS SERIOUSLY ENTERTAINED

When Hiel attended the funeral of Abiram, the firstborn son, we might have expected that he would give up, yet he persisted. The curse was effective, yet he went back to work and lost his youngest child when he set up the gates (the last stage of building a city).

Jeremiah knew of the power of disbelief. He said,

“Do not be proud, for the Lord has spoken. Give glory to the Lord your God before He causes darkness, and before your feet stumble on the dark mountains, and while you are looking for light, He turns it into the shadow of death and makes it dense darkness. But if you will not hear it, my soul will weep in secret for your pride; my eyes will weep bitterly and run down with tears, because the Lord’s flock has been taken captive” (Jeremiah 13:15–17).

The other thief on the cross is also a good example of the power of unbelief. He knew he was within minutes of death and still railed on the only One who could save him (Luke 23:39). How foolish are we today if we doubt God’s Word? Some will even admit that the “Bible says that,” but they persist in doubting that it applies to them. Sadly, they are in opposition to themselves (2 Timothy 2:25).

1 Perhaps God wanted the ruins left as a “sermon written in stone.” They would be permanent proof of God’s displeasure with idolatry and His power over idol gods. A new city would erase the memory of God’s judgment. The wrecked city would also serve as a reminder that God fights for His people (Deuteronomy 3:22; cf. Romans 8:31) and that it is foolish to trust in the arm of flesh (2 Chronicles 32:8).

2 There was a city of Jericho that appeared during the next seven or, at the latest, twenty-five years (Joshua 18:21; Judges 1:16; 3:13; 2 Samuel 10:4–5). This city was in the same vicinity but not built upon the same site. Josephus (a Jewish historian) distinguishes between “the old city which Joshua took first of all the cities of the land,” and an adjacent Jericho. Some say that there have been at least three Jerichos built at different places in this same general area. The new city in Joshua’s time could probably have been more easily built on a new site than the old one because of the rubble that would have had to be cleared away. After it was rebuilt, Elijah and Elisha visited a school of the prophets there (2 Kings 2:4–5, 18).