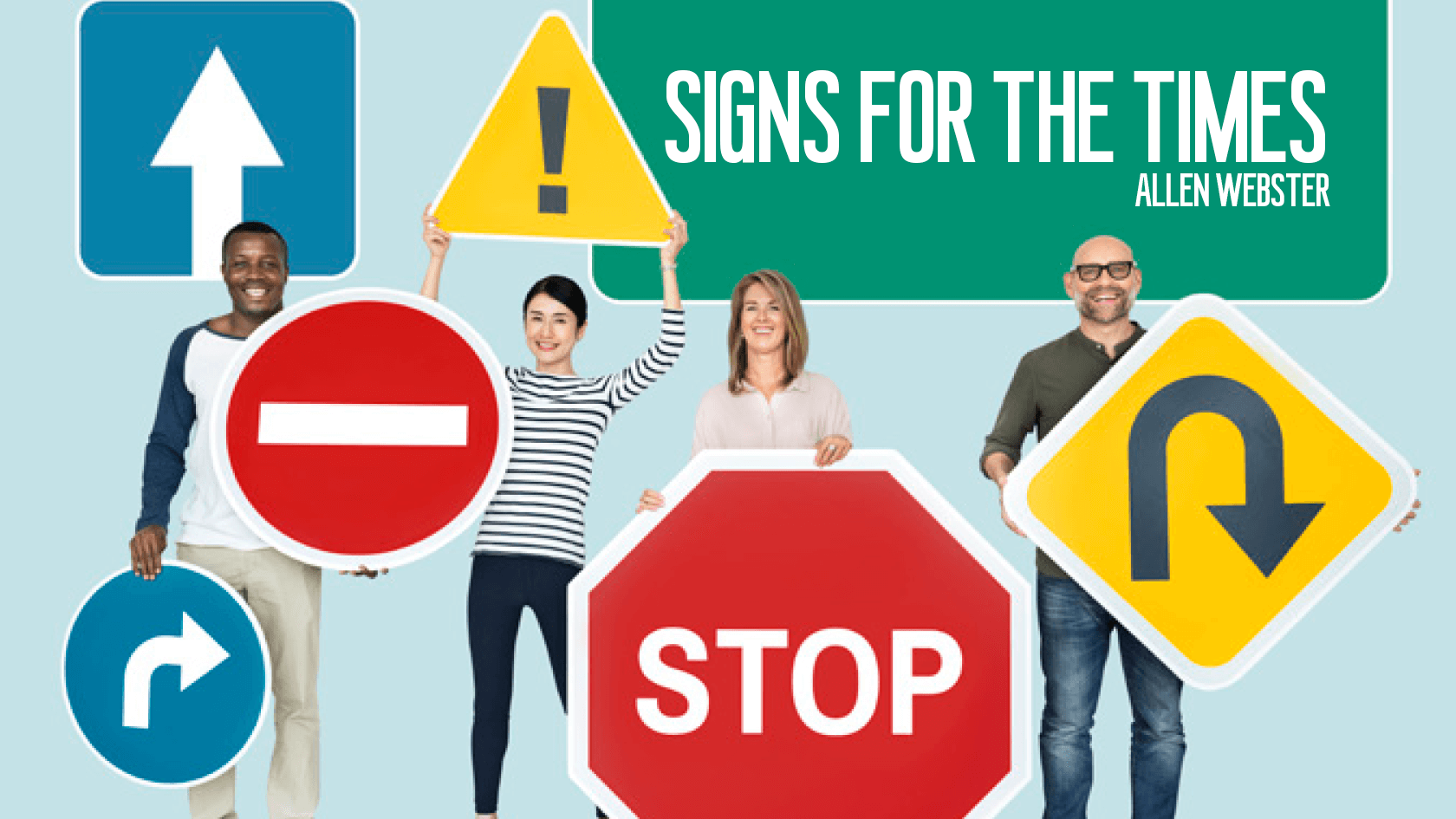 Home Editorial Signs for the Times

How many wasted miles, foolish injuries, and senseless deaths could be avoided if only people read signs? God must think the same thing, as He watches men speed down the devil’s highway ignoring all His road signs.

STOP! “Cease to do evil, learn to do good; seek justice, rebuke the oppressor; defend the fatherless, plead for the widow” (Isaiah 1:16–17). “Cease listening to instruction, my son, and you will stray from the words of knowledge” (Proverbs 19:27). “Because of your own understanding, cease!” (Proverbs 23:4). “Do not cease to give thanks” (Ephesians 1:16).

YIELD! “Submitting to one another in the fear of God” (Ephesians 5:21). “Likewise you younger people, submit yourselves to your elders. Yes, all of you be submissive to one another, and be clothed with humility, for ‘God resists the proud, but gives grace to the humble’” (1 Peter 5:5). “Let nothing be done through selfish ambition or conceit, but in lowliness of mind let each esteem others better than himself” (Philippians 2:3).

DO NOT ENTER! “Do not enter the path of the wicked, and do not walk in the way of evil. Avoid it, do not travel on it; turn away from it and pass on” (Proverbs 4:14–15). “Blessed is the man who walks not in the counsel of the ungodly, nor stands in the path of sinners, nor sits in the seat of the scornful” (Psalm 1:1). “Make no friendship with an angry man, and with a furious man do not go, lest you learn his ways and set a snare for your soul” (Proverbs 22:24–25). “There is a way that seems right to a man, but its end is the way of death” (Proverbs 14:12).

PROCEED WITH CAUTION: “Ponder the path of your feet, and let all your ways be established. Do not turn to the right or the left; remove your foot from evil” (Proverbs 4:26–27). “The way of the unfaithful is hard” (Proverbs 13:15). “The simple believes every word, but the prudent considers well his steps. A wise man fears and departs from evil, but a fool rages and is self-confident” (Proverbs 14:15–16). “For which of you, intending to build a tower, does not sit down first and count the cost, whether he has enough to finish it”? (Luke 14:28). “A prudent man foresees evil and hides himself, but the simple pass on and are punished” (Proverbs 22:3). “And do not lead us into temptation, but deliver us from the evil one” (Matthew 6:13). “Plans are established by counsel” (Proverbs 20:18). “The name of the Lord is a strong tower; the righteous run to it and are safe” (Proverbs 18:10).

ONE WAY! “Jesus said to him, ‘I am the way, the truth, and the life. No one comes to the Father except through Me’” (John 14:6). “Nor is there salvation in any other, for there is no other name under heaven given among men by which we must be saved” (Acts 4:12).

DO NOT PASS: “A certain man went down from Jerusalem to Jericho, and fell among thieves, who stripped him of his clothing, wounded him, and departed, leaving him half dead. Now by chance a certain priest came down that road. And when he saw him, he passed by on the other side” (Luke 10:30–31). “Whoever shuts his ears to the cry of the poor will also cry himself and not be heard” (Proverbs 21:13). “He who has pity on the poor lends to the Lord, and He will pay back what he has given” (Proverbs 19:17).

WATCH FOR CHILDREN: “Train up a child in the way he should go, and when he is old he will not depart from it” (Proverbs 22:6). “Then Jesus called a little child to Him, set him in the midst of them . . . But whoever causes one of these little ones who believe in Me to sin, it would be better for him if a millstone were hung around his neck, and he were drowned in the depth of the sea” (Matthew 18:2–6). “And you, fathers, do not provoke your children to wrath, but bring them up in the training and admonition of the Lord” (Ephesians 6:4).

WATCH FOR CURVES! “. . . in the midst of a crooked and perverse generation, among whom you shine as lights in the world” (Philippians 2:15). “Therefore let him who thinks he stands take heed lest he fall” (1 Corinthians 10:12). “Be sober, be vigilant; because your adversary the devil walks about like a roaring lion, seeking whom he may devour” (1 Peter 5:8). “For a righteous man may fall seven times and rise again, but the wicked shall fall by calamity. Do not rejoice when your enemy falls, and do not let your heart be glad when he stumbles” (Proverbs 24:16–17).

NO U TURN! “But Jesus said to him, ‘No one, having put his hand to the plow, and looking back, is fit for the kingdom of God’” (Luke 9:62). “Remember Lot’s wife” (Luke 17:32). “For if, after they have escaped the pollutions of the world through the knowledge of the Lord and Savior Jesus Christ, they are again entangled in them and overcome, the latter end is worse for them than the beginning. For it would have been better for them not to have known the way of righteousness, than having known it, to turn from the holy commandment delivered to them” (2 Peter 2:20–21).

It pays to watch for signs on the heavenly highway!