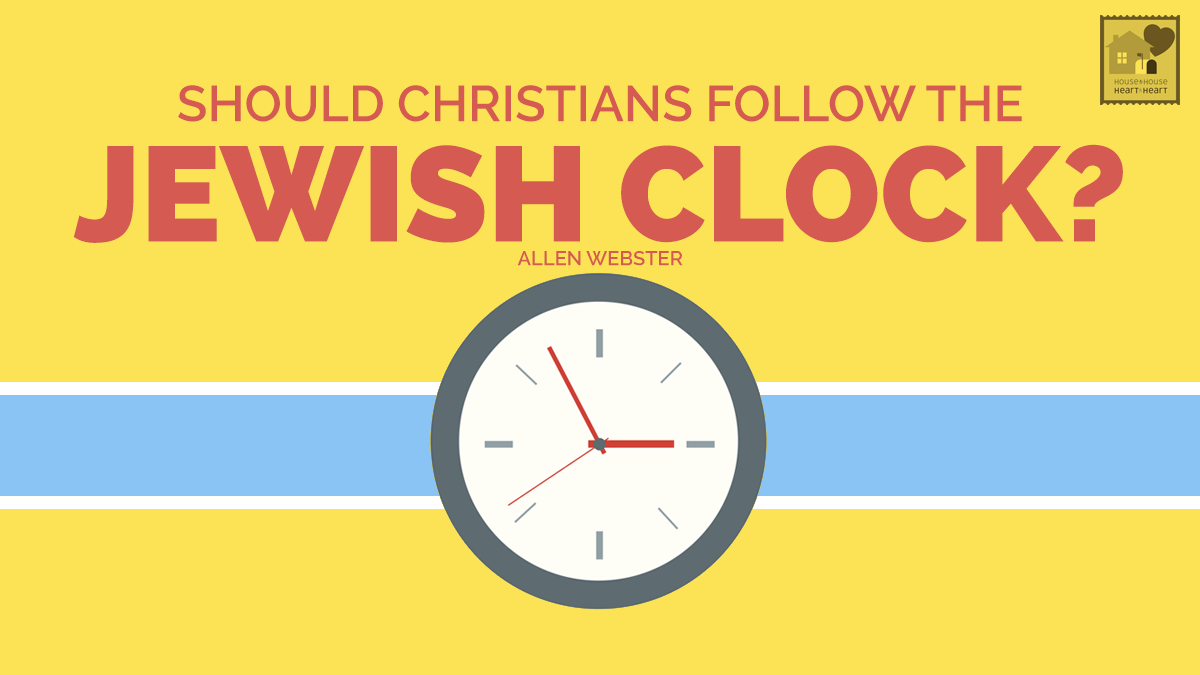 Home Bible Study Should Christians Follow the Jewish Clock?
A Jewish day runs from sunset to sunset instead of midnight to midnight. Thus, in general terms, Jews begin their days at 6:00 p.m., whereas we begin ours at 12:00 a.m. (the modern world having followed the Roman reckoning of time).
The Jewish day is modeled on the Creation account and is of no fixed length, except generally the day was considered to be twelve hours and the night twelve hours (John 11:9). Based on the reference to the evening and the morning were the first day (Genesis 1:5), the Jewish day starts in the evening instead of the middle of the night.
Accordingly, standard times and time zones have no place in the Jewish calendar. However, the steady progression of sunset around the world and seasonal changes results in gradual time changes from one day to the next based on observable astronomical phenomena (the sunset) and not on man-made laws and conventions.[popover title=”Source” title_bg_color=”” content=”http://en.wikipedia.org/wiki/Hebrew_calendar” content_bg_color=”” bordercolor=”” textcolor=”” trigger=”hover” placement=”” class=”” id=””]*[/popover]
Some have concluded from this that Christians may worship on Saturday nights and be as scriptural as those who worship on Sunday mornings. Is this the case?

First, let us note that the first day of the week is the Christian day of worship.

Wayne Jackson[popover title=”Source” title_bg_color=”” content=”The main points are from Jackson (http://www.christiancourier.com/articles/read/what_about_a_saturday_ night_observance_of_the_lords_supper); the discussion under them is mine or from other sources as noted.” content_bg_color=”” bordercolor=”” textcolor=”” trigger=”hover” placement=”” class=”” id=””]*[/popover] points out how easily this can be seen in the Scriptures:

Second, a strict observance of following the Jewish example would require adjusting our clocks to Middle Eastern time.

When it is 6:00 p.m. on Saturday night in Jerusalem, it is 10:00 a.m. on Saturday here. And, of course, it could vary up to twelve hours depending on where one is on the globe. Jesus recognized this truth relative to His second coming: it will be both day and night when He comes back in the twinkling of an eye (Matthew 24:40-41; Luke 17:34). If one is going to adjust to Jewish time and worship on Saturdays at 6:00 p.m., then he is also obligated to adjust to Jerusalem time as well. Again, we see the wisdom of God saying only to worship on the first day of the week, and  allowing each to understand that phrase within his own world.

The Sabbath in the Old Testament was a day of rest sanctified to the Lord (Exodus 16:23; Exodus 31:15; Deuteronomy 5:14), but Paul lists the Sabbath among the Jewish observances that are not required of Christians (Colossians 2:16; Galatians 4:9-10; Romans 14:5). Sunday is not the Christian Sabbath as it is sometimes called. The New Testament never refers to it in this way.

Fourth, since the New Testament day of worship celebrates Jesus’ resurrection, which occurred early Sunday morning (Matthew 28:1; Mark 16:1; Luke 24:1; John 20:1) and not on Saturday night, it follows that worship should be on Sunday.

Sunday was also the day the resurrected Christ made appearances to various disciples (Luke 24:1-43; John 20:19).

The Day of Pentecost was always on the first day of the week (Sunday) (Leviticus 23:15-21). According to Strong’s Concordance, day refers to the space between dawn and dark. Thayer says it means the interval between sunrise and sunset; in the daytime. Fully come means completely or entirely. Thus this phrase means that the assembly was held after dawn on Sunday morning. The early church thus did not meet on Saturday night but on Sunday morning.

Sixth, the gospel was designed to be a universal religion, not a Jewish religion.

Jesus said, Go ye into all the world teach all nations (Mark 16:15; Matthew 28:19). Although the church was born in a Jewish environment, it was not meant to be tied to the particulars of Jewish culture. As the church moved from Jewish culture to the Roman world, it began using Romans measures. By the end of the first century, when John wrote his biography of Jesus’ life, he was using Roman time. For instance, John wrote, “And it was the preparation of the passover, and about the sixth hour: and he saith unto the Jews, Behold your King!” (John 19:14). When compared to Matthew’s account (Matthew 27:45), it is evident that John was reckoning time in a different way than Matthew. Further, in commenting on the phrase When therefore it was evening on that day, A.T. Robertson points out that day is an old word for the time from six to nine (John 6:16). This was the same day as Jesus’ resurrection (20:1) and was still being referred to as that day after 6:00 p.m.! Thus John was using Roman time instead of Jewish time. Robertson further points out that the addition of the phrase the first day of the week[2] proves that John is using Roman time, not Jewish, for here evening follows day instead of preceding it.

Conclusion: Since Christians are to worship God on the first day of the week, could we worship at 6:00 p.m. on Saturday nights?

No, we should worship according to the clock and calendar of the world in which we live. The first day of our week begins at 12:00 A.m., not 6:00 p.m. Saturday night.

Lipscomb and Sewell answered this question in this way:

There is nothing more certain than that the division of time which made the day begin at six p.m. was not continued in the New Testament times, and especially among the Gentile nations. The third hour was nine o’clock, the sixth hour was twelve, and the ninth hour was three p.m. This may have been only the divisions for the day, not including the night. My opinion is that the Savior and the apostles adopted the division of the people among whom they lived. Smith’s Bible Dictionary says: The Babylonians reckoned the day from sunrise to sunrise; the Umbrians, from noon to noon; the Romans, from midnight to midnight; the Athenians, from sunset to sunset. The Jews early adopted the last, but it is thought after the captivity they held to the Babylonian division, or from sunrise to sunrise. This seems to me to be the division recognized in the New Testament. Matthew 28:1 and Mark 16:1-2 fix the end of the Sabbath at sunrise.[popover title=”Source” title_bg_color=”” content=”From Questions Answered, by Lipscomb and Sewell, McQuiddy Printing Company. Nashville, TN. 1921 (reprinted 1974).” content_bg_color=”” bordercolor=”” textcolor=”” trigger=”hover” placement=”” class=”” id=””]*[/popover]

Are we then bound by the Jewish mode of counting time and must we regard the day as beginning and ending at sundown? No. There is nothing in the New Testament which designates any specific arrangement for computing this matter. The allegation that the Jewish method was God’s method, and that this arrangement is binding on the church today, is fanciful and false. Christians properly follow the method prevailing where they live. There are three hours difference between Eastern Standard Time and Pacific Standard Time. A meeting, to partake of the Lord’s Supper at 1 a.m., Sunday, in New York would be scriptural; a similar meeting at the same time in Los Angeles would be unscriptural, because it would be at 10 p.m., Saturday night. I once partook of the Lord’s Supper in Tiberias, on the shore of the historic Sea of Galilee at 8 a.m. on Sunday morning. At that moment, it was 11 p.m. Saturday night, in Memphis, Tennessee.[popover title=”Source” title_bg_color=”” content=”Questions and Answers. Open Forum. Freed-Hardeman College Lectures. Guy N. Woods. Volume 1. 1976.” content_bg_color=”” bordercolor=”” textcolor=”” trigger=”hover” placement=”” class=”” id=””]*[/popover]