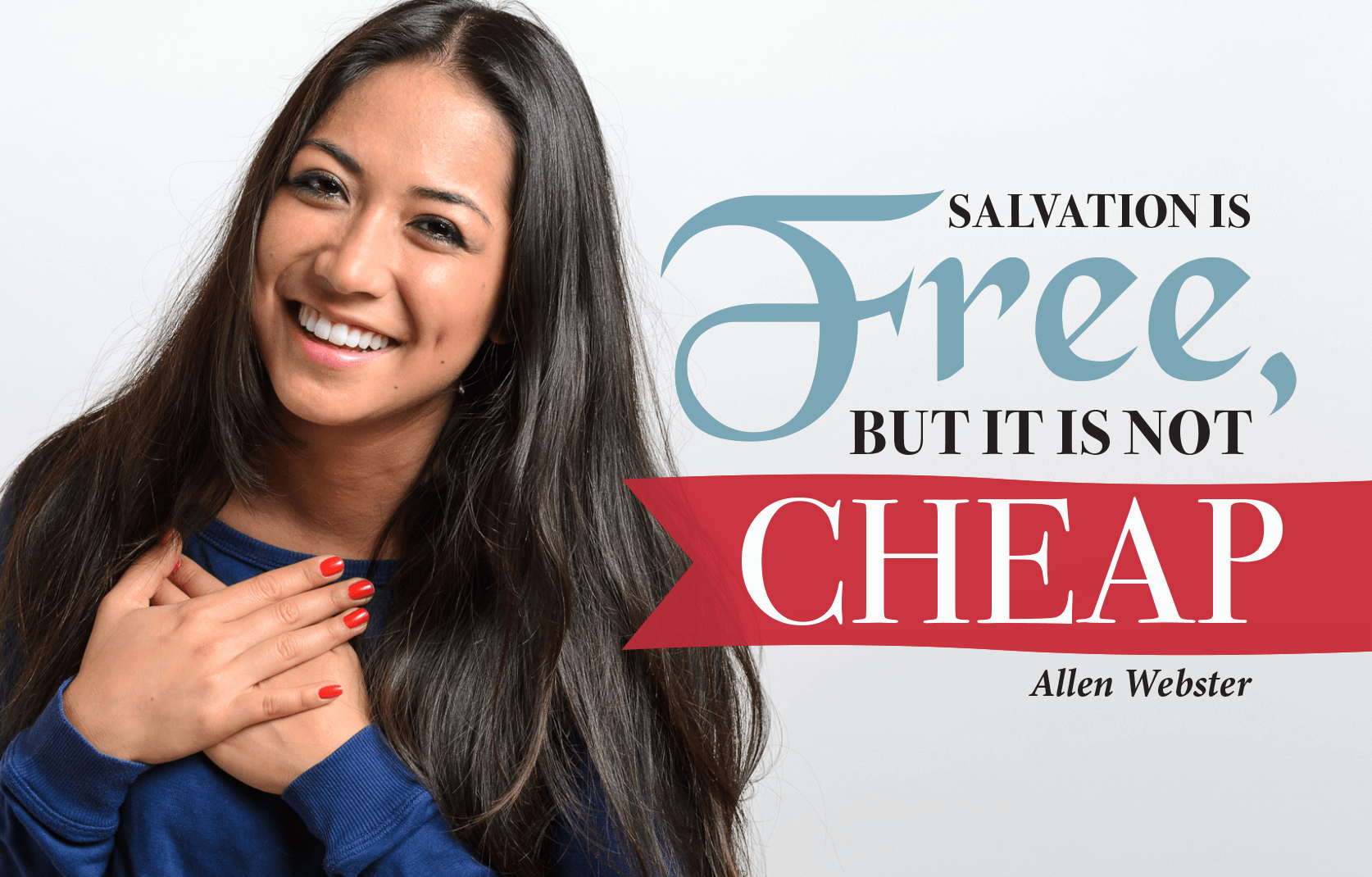 Home Editorial Salvation is Free, But It Is Not Cheap

Jesus never said grace. Believe it or not, the Bible does not record where Jesus ever used that word. It was used of Him (Luke 2:40; John 1:14, 16, 17) but never by Him. But do not misunderstand, He taught it; He lived it; He just never said it. Then again, He said a lot about grace. We call a whole category of His stories the “grace parables.” Classifications vary, but most lists include at least eight grace parables, including some of His most famous.1

The shortest is Luke 7:41–42: “There was a certain creditor who had two debtors. One owed five hundred denarii, and the other fifty. And when they had nothing with which to repay, he freely forgave them both. Tell Me, therefore, which of them will love him more?”

This is a Jesus’ concise picture of God’s voluminous grace. He sums up in a few syllables what all words combined could never express. “He freely2 forgave them both.” That’s grace. Let’s ascend the slope of the mountain peak doctrine of grace.

The Mount Everest passage is Ephesians 2:8: “For by grace you have been saved through faith, and that not of yourselves; it is the gift of God.” What does the Bible say about salvation by grace?

Paul states it simply: “For by grace you have been saved.” The two debtors did not earn their freedom. Their canceled obligation was a purely gratuitous act on the creditor’s part, on the ground only of their bankruptcy. Forgiveness is a river that flows out of the spring of grace: “In Him we have redemption through His blood, the forgiveness of sins, according to the riches of His grace” (Ephesians 1:7; cf. 1 Peter 1:18–19).

Donald Barnhouse said, “Love that goes upward is worship; love that goes outward is affection; love that stoops is grace.” That God can love us in spite of our sins is hardly believable. How He can forgive lifelong rebels is unfathomable. It is graceful.

“Not of yourselves.” Forgiveness is not something we may purchase or earn. We are bankrupt—we have nothing with which to pay. To show grace is to extend favor to one who doesn’t deserve it and can never pay it back. Someone put it this way:

When we work a forty­-hour week and receive fair pay for our time, that is a wage.

When we compete in athletics and receive a trophy for our performance, that is a prize.

When we receive recognition for long service or high achievements in business, that is an award.

When we are incapable of earning a wage, can win no prize, and deserve no award—yet receive a gift anyway—it is grace.

“It is the gift of God.” We cannot make salvation works­-centered and man-­centered. It is grace­-centered and God­-centered. The emphasis is on what God does for us, not what we do for God. The little wheels run by man’s faith and the big wheels by God’s grace.3 When David Lipscomb was an old man on campus a student asked, “Upon what do you base your hope of salvation?” Without hesitation, he said, “Upon the grace and the mercy of God.” That’s the only hope any of us have. Grace is getting what we need (heaven) instead of what we deserve (hell).

Gore Vidal’s book, Lincoln, tells of the president and his advisors discussing life after the war. It was evident that the North would win, so they asked how he planned to deal with the South. Lincoln said, “I will treat them as if they never left.” That’s grace. It is exactly what the father did for a skinny, humbled prodigal boy coming home from a long summer trip (Luke 15:20–­24). “As if he never left,” he regained his place in the family (ring), his dignity, and his provisions.

The creditor in the parable took a loss. He paid the debtors’ tabs. Salvation is a “gift of God”—a gift that cost Him dearly. It cost Jesus His life on the cross; He purchased it “with His own blood” (Acts 20:28). No one in that banquet hall (when Jesus told the parable) knew how much it cost Jesus to say to that woman, “Your sins are forgiven” (Luke 7:48). Picture Him on the cross with bloody thorns lacerating His scalp, with darkening bruises on His face, with inflamed whip stripes on His back, and with nails protruding from disfigured hands and feet. Hear Him call for water and listen to His agonized plea: “My God, My God, why have You forsaken Me?” (Matthew 27:46). Why is He going through with Golgotha? Because He told that prostitute she could be forgiven (and because He promised us, too). Salvation is free to us, but it was not cheap to Him.

Some dangerous heresies are circulating about grace. They are so ugly they probably make the angels blush. A boy asked one preacher, “Sir, what can I do to be saved?” The preacher replied, “Son, you’re too late.”

“No, you’re too late to do anything. Jesus already did it all two thousand years ago.” It is strange that Peter did not know that. When he was asked on Pentecost, “What shall we do?” (Acts 2:37), he did not say, “You are too late. Jesus did it all fifty days ago on the cross. There is nothing for you to do.” Instead, the Holy Spirit instructed him to say, “Repent, and let every one of you be baptized in the name of Jesus Christ for the remission of sins; and you shall receive the gift of the Holy Spirit” (2:38). There was something for these believers to do to be saved. The historian continues, “And with many other words he testified and exhorted them, saying, ‘Be saved from this perverse generation’” (2:40).

Paul wrote more books of the New Testament than any other writer; predictably, he also said the most about grace. He used the word 99 of the 131 times it occurs.4  In all those references Paul never once said salvation was unconditional or by grace only. How did Paul understand salvation by grace through faith when he was saved? He asked on that Damascus road, “Lord, what do You want me to do?” (Acts 9:6). Surely Paul misunderstood. He should have known that grace only through faith alone is all that is necessary, and that “doing” something would mean he was trying to save himself. Surely Jesus corrected him. The Lord answered, “Arise and go into the city, and you will be told what you must do” (Acts 9:6). Maybe Saul misunderstood, but unquestionably the inspired preacher would clarify things. Ananias brought Saul this command: “And now why are you waiting? Arise and be baptized, and wash away your sins, calling on the name of the Lord” (Acts 22:16). Paul had been a believer for three days, yet still had sins to be washed away. He did not argue that baptism was unessential to his salvation; in­stead, he “arose and was baptized” (Acts 9:18).

Did Paul later disavow what he did, admitting shamefully that he tried to merit salvation by doing good works? No, he continued talking of the “obedience to the faith” (Romans 1:5; 6:17–18; 16:26) and of “faith working through love” (Galatians 5:6). He linked grace and obedience together (Titus 2:11–12) and urged Christians to “work out your own salvation with fear and trembling” (Philippians 2:12). He discussed the necessity of obeying the truth (Romans 2:8; Galatians 3:1), obeying the gospel (Romans 10:16), and obeying Christ (Hebrews 5:8–9). These were all a part of Paul’s certified gospel (Galatians 1:6–10).

What, then, does “not of works, lest any man should boast” (Ephesians 2:9) mean? Did Paul contradict his other statements? Did the Holy Spirit tell Paul one thing and James another (“a man is justified by works, and not by faith only,” James 2:24)? No, two different kinds of works are considered. Works of merit differ from works of obedience. It is one thing to try to get to heaven by doing good works; it is another to humbly submit to God’s commands. We avail ourselves to God’s grace by meeting the conditions He attached to it. Do we earn it? No. Do we deserve it? No. He gives it away. But He only gives it to those who respect His will enough to do what He asks of them. He is “the author of eternal salvation to all who obey Him” (Hebrews 5:9).

God’s forgiveness is not automatic; we can reject grace. In 1830, George Wilson was arrested for mail theft and sentenced to be hanged. President Andrew Jackson eventually gave him a pardon—but he refused to accept it. The authorities were puzzled: should Wilson be freed or hanged? They consulted Chief Justice John Marshall, who handed down this decision: “A pardon is a slip of paper, the value of which is determined by the acceptance of the person to be pardoned. If it is refused, it is no pardon. George Wilson must be hanged.”5

Jesus says a lot about grace (for someone who never said it).