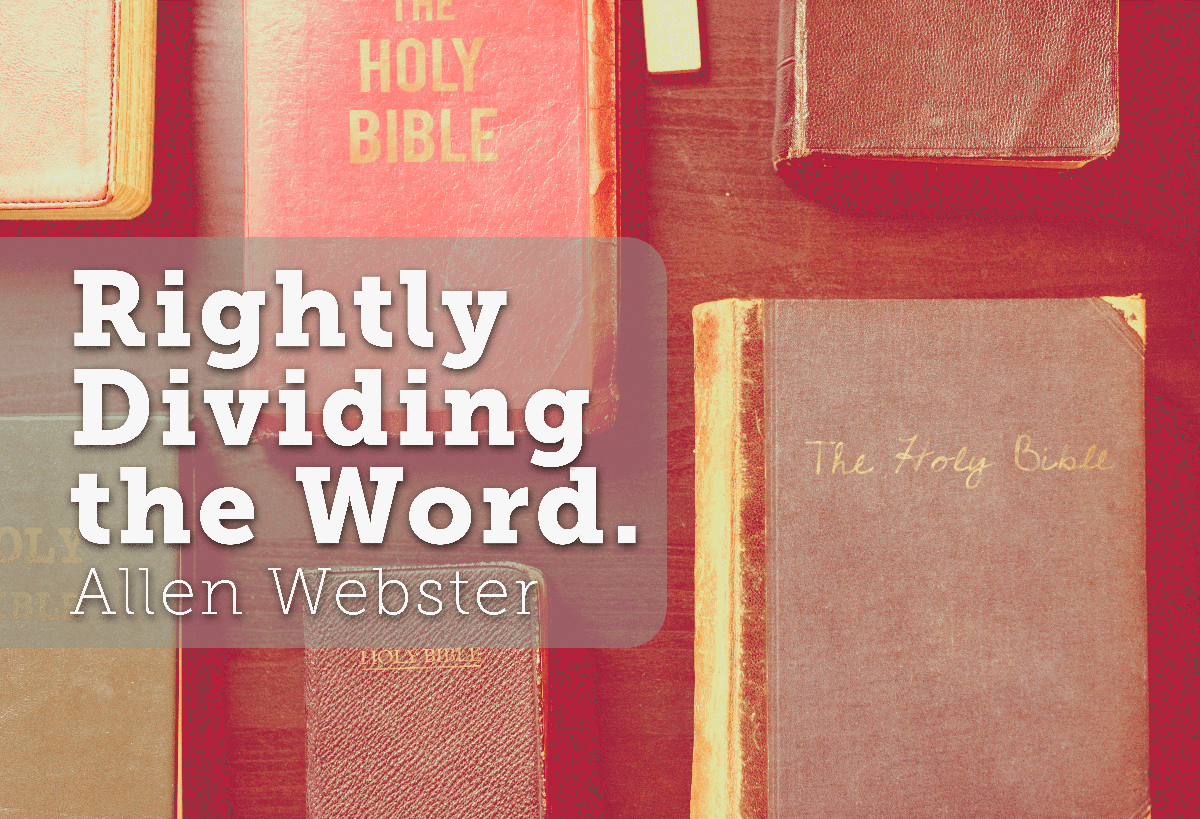 Geography books often have two large maps depicting the two hemispheres. They face each other—the right-hand page shows the eastern hemisphere, and the left-hand page the western hemisphere. These hemispheres are subdivided naturally into continents and countries. The Western Hemisphere has the continents of North and South America. The North American Continent is divided into Canada, the United States, Mexico, and Central America.

Similarly, the Bible is divided into two great parts. There is a blank leaf just about the center, indicating these divisions. The Old Testament of thirty-nine books, from Genesis to Malachi, and the New Testament with its twenty-seven books, from Matthew to Revelation.

Paul’s command to rightly divide the word (2 Timothy 2:15) includes differentiating between these sections. If we do not, we will never be unable to properly serve God. God has spoken to man in different ways at different times (Hebrews 1:1). He expects different things of men today than He did of Moses.

Many people study the Bible a lifetime without grasping this simple point. Most preachers and commentary writers never learn how to fully divide the word of truth.

Overview of the Old Testament

Find Genesis 1 and Malachi 4 in your Bible. Hold the pages between these chapters between your thumb and forefinger. Between your fingers you hold

The Old Testament has three subdivisions—the law, the prophets, the psalms (Luke 24:44).

Psalms includes the five poetic books (Job-Song of Solomon) which constitute that part of the Old Testament written in metrical units that could be sung and accompanied by the lyre. They expressed the wisdom, emotions, prayers, and praises of God’s people. They were sometimes referred to by both Christ and the Jews as a part of the law.

Prophecy, the final section, contains the seventeen books between Isaiah and Malachi. Every prophecy spoken by God has been fulfilled or is being fulfilled or will be ere time’s knell shall be sounded and all the ransomed of earth gathered home.

Transition: The Day When the Law Changed

How long was the Old Testament to be in effect? Consider the Bible’s answer to five important questions:

Unto whom was Moses’ law given? It was given to the Jewish nation at Sanai following their deliverance from Egypt: “The Lord our God made a covenant with us in Horeb. The Lord made not this covenant with our fathers, but with us, even us, who are all of us here alive this day” (Deuteronomy 5:2-3). This gives the time (leaving Egypt), the place (Mt. Sinai), and the people (those that were alive that day) involved in receiving Moses’ law.

Thus, no Gentile— a descendant of Japheth or Ham—was ever subject to Moses’ law. Its promises, threats, and punishments were never applicable to non-Jews. Now there is a better covenant, founded upon better promises (Hebrews 8:6), applicable to both Jews and Gentiles—everyone on earth.

When was the law given? The Old Testament predicted its own demise: “Behold, the days come, saith the Lord, when I will make a new covenant with the house of Israel and with the house of Judah: not according to the covenant that I made with their fathers in the day when I took them by the hand to lead them out of the land of Egypt; because they continued not in my covenant, and I regarded them not” (Jeremiah 31:31-34; Hebrews 8:8-9).

How long was it to last? Galatians 3:19 continues, “Till (a fixed limit) the seed should come to whom the promise was made.” Four hundred and thirty years before the law was given at Sinai—1921 B.C.—God called Abraham from Ur of the Chaldees. He made him this promise: “I will make of thee a great nation; I will multiply thy seed like the stars of the heavens and the sands of the seashore; I will bless them that bless thee, and I will curse them that curse thee, and in thee and thy seed shall all the nations of the earth be blessed” (Genesis 12:2-3).

There was the first definite promise of salvation in the Bible. (Genesis 3:15 was a veiled promise.) Who was the Seed? Paul wrote, “To Abraham and his seed were the promises made. He saith not, and to seeds, as of many; but as of one, And to thy seed, which is Christ” (Galatians 3:16).