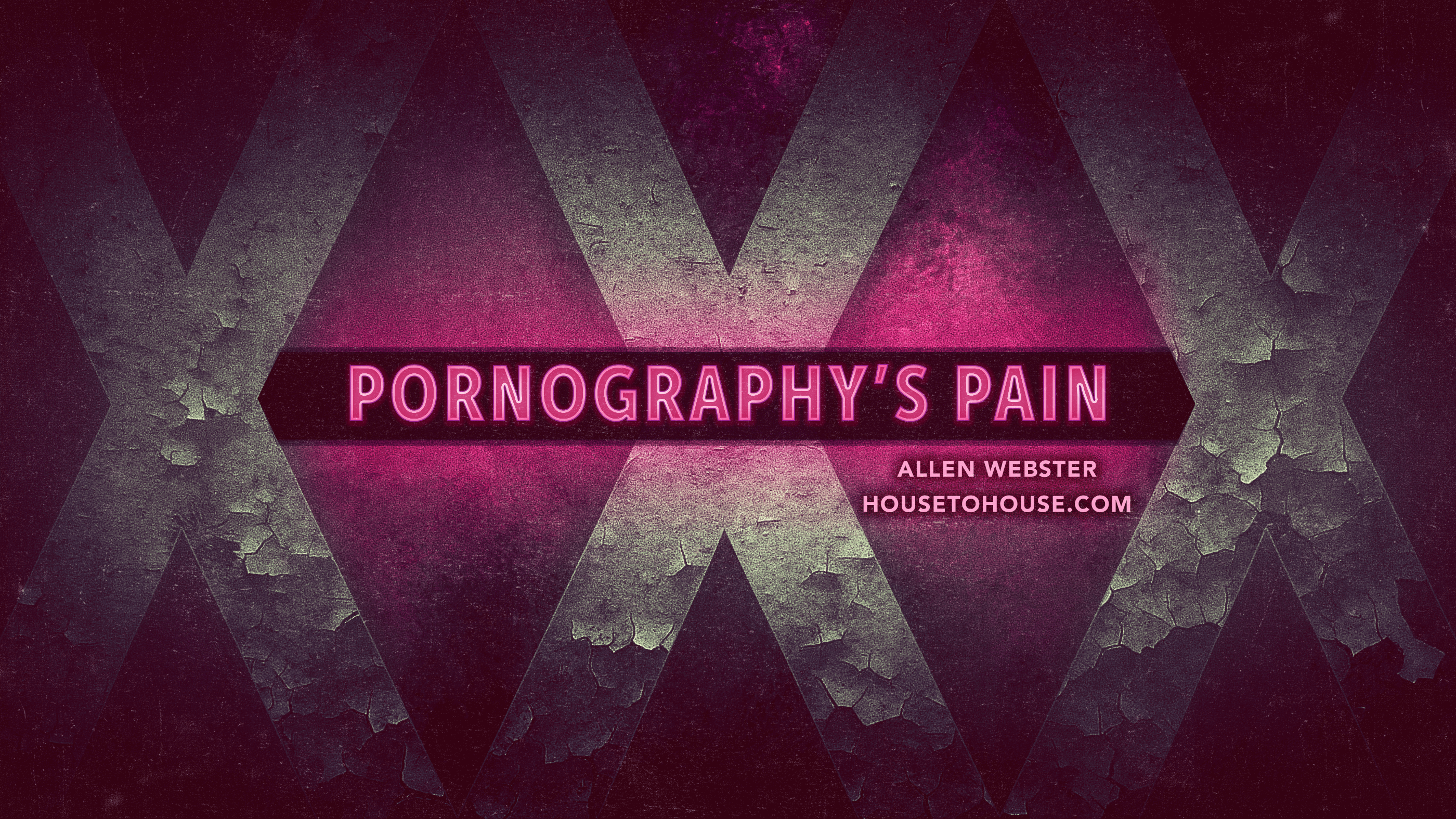 “Shouldn’t a person have the right to watch or read whatever he pleases? As long as he watches or reads in the privacy of his own home, and nobody gets hurt, what difference does it make?”

This expresses a view commonly held among American males—and many females. Let’s consider who is hurt by pornography use.

The individual who reads and watches pornography does not come away unscathed. Paul wrote,

God promises one will reap “corruption”;1 who would dare disagree with Him?

What a person sows in his mind determines how he acts. Solomon wrote, “For as he thinketh in his heart, so is he” (Proverbs 23:7). And, “Keep thy heart with all diligence; for out of it are the issues of life” (Proverbs 4:23). Someone observed, “Sow a thought, reap an action. Sow an action, reap a character. Sow a character, reap a destiny.”

Sex addiction is not gender specific, as one might imagine. Half of cybersex addicts are men, and half are women, with men preferring pornography pictures and women preferring sexually explicit chat rooms; however, 23 percent of the women preferred pictures.5

Why is pornography addictive? Beyond the obvious—that it partially satisfies the human sex drive—Dr. Alvin Cooper, clinical director of the San Jose Marital Services and Sexuality Center in San Jose, California, found that people engage in online sexual activities to break away from their daily routines, explore fantasies, relieve stress, and spice up their sex lives.

Pornography use is progressive in that one needs more and more to satisfy cravings. It starts small, but it grows to what one has aptly described as “athlete’s foot of the mind.” It never goes away. It always asks to be scratched, promising relief. To scratch, however, is to cause pain and to intensify the itch.

The Bible’s command for men to honor women (1 Peter 3:7) is sadly lost in a modern world. The National Victim Center now estimates that at least one woman is raped in the U.S. every forty-six seconds.(6)  Why so many rapes? Many experts point to the increase in the use of pornography.

Exposure to pornography increases the inclination to believe that women like to be hurt, to be humiliated, to be forced to do things that they do not want to do, or to pretend to be forced to do things that they really do want to do. Researchers reported that in the field of violent/pornographic movies, prolonged exposure to X-rated as well as R-rated films caused male college students to be “desensitized” to rape and violence, and more accepting to the rape myth that women say no when they really mean yes. (7)

Dr. Sal Pellicano, veteran prison chaplain for prison systems in Florida, North Carolina, and New Jersey reports that during his fifteen-year career, 100 percent of the inmates he has known who have been incarcerated for a sex crime were pornography users. (8)

An estimated 3500–5000 people in the U.S. are murdered each year by “recreational killers.”29 Most of them feed on pornography. Serial killer Ted Bundy, in an interview just before his execution, said,

Listen, I’m no social scientist, and I haven’t done a survey. I don’t pretend that I know what John Q. Citizen thinks about this. But I’ve lived in prison for a long time now. And I’ve met a lot of men who were motivated to commit violence JUST LIKE ME. And without exception, without question, EVERY ONE of them was deeply involved in pornography. There’s no question about it. The FBI’s own study on serial homicide shows that the most common interest among serial killers is pornography. Well-meaning, decent people will condemn the behavior of a Ted Bundy, while they’re walking past a magazine rack full of the very kinds of things that send young kids down the road to be Ted Bundys. But I’ll tell you, there are lots of other kids playing in streets around this country today who are going to be dead tomorrow, and the next day, and the next day and month, because other young people are reading the kinds of things and seeing the kinds of things that are available in the media today. (30)

Is it any wonder that the Bible instructs Christians to think on that which is pure? Paul wrote,

Pornography, sexually explicit movies, etc., have paved the way for many an act of rape, adultery, incest, homosexuality, and other equally vile sins. . . . One simply cannot feed upon the impure and be pure! (Matthew 5:28; 2 Peter 2:14). (31)

An individual may suffer the loss of other organs, but no one can sustain the failure of a heart. In a biological sense—and a spiritual sense—it is good advice to “keep thy heart with all diligence; for out of it are the issues of life” (Proverbs 4:23). Our word brain is not used in the Old Testament; the word heart refers to the center of intellectual activity. A man’s physical and spiritual health depend in large part upon the condition of his heart—mind.

Our hearts can get dirty just like our hands. “O Jerusalem, wash thine heart from wickedness, that thou mayest be saved. How long shall thy vain thoughts lodge within thee?” (Jeremiah 4:14; cf. Ephesians 2:1–3; Titus 3:3). Job wondered, “How much more abominable and filthy is man, which drinketh iniquity like water?” (Job 15:16). God Himself said, “For the imagination of man’s heart is evil from his youth” (Genesis 8:21).

The wise man said, “Lo, this only have I found, that God hath made man upright; but they have sought out many inventions” (Ecclesiastes 7:29). On a bit more cynical day, he expressed it this way:

This is an evil among all things that are done under the sun, that there is one event unto all: yea, also the heart of the sons of men is full of evil, and madness is in their heart while they live, and after that they go to the dead (Ecclesiastes 9:3).

Jeremiah added: “The heart is deceitful above all things, and desperately wicked: who can know it?” (Jeremiah 17:9). The Lord Jesus said, “For out of the heart proceed evil thoughts, murders, adulteries, fornications, thefts, false witness, blasphemies” (Matthew 15:19). It is an ugly brood that comes out of the human heart when it gives in to wicked imaginations.

Where do I draw the line?

There is no sin in appreciating someone’s beauty in a general sense—“He’s a handsome guy”; “She’s pretty”—but it becomes lust when one starts to mentally undress, compare, and visualize an encounter.

Solomon instructed his son not to lust after a woman’s beauty in his heart (Proverbs 6:25). Sex does not begin in the bedroom or the backseat of a car. It begins in the mind. That is where we must put our line of defense in the fight with Satan.

Solomon draws the line at lust. Lust32 here literally means to see a woman as a “delectable thing”; it refers to “a burning desire for intimacies with her.” The admonition is a warning to stop the very first step toward impure desires.

In the context of Solomon’s warning, a naive young man saw himself on the verge of satisfying his curiosity about what happens in sexual relations. He watches a loose woman and thinks about what it would be like to have sex. An older man sees the same woman and wonders what it would be like to have sex with her. Each undresses her with his eyes and takes home the mental images. Both muse over them while lying in bed, and daydream of her while going about their routines at work or school.

These activities are nothing less than sexual foreplay. The battleground for remaining pure in body is remaining pure in mind. To harbor unchaste thoughts and feelings in one’s heart is to be guilty of adultery in the heart before God. James explained how sin develops: “Every man is tempted, when he is drawn away by his own lust, and enticed” (James 1:14).

The pure, holy, and undefiled Lord Jesus (Hebrews 7:26) who “knew no sin” (2 Corinthians 5:21) said, “Whosoever looketh on a woman to lust after her hath committed adultery with her already in his heart” (Matthew 5:28). It was lust in Amnon’s heart that caused him to rape his half sister Tamar (2 Samuel 13:1–14).

What are some guidelines?

Some ready references on pornography

2 Much of this research is found at the Web site for Proven Men Ministries, Ltd., 16011 Chieftain Ave., Rockville, MD 20855 (http://www.1wayout.org/pages/need.aspx). No endorsement of all content is implied, but one may find much additional useful information at this site.

4 Results of MSNBC.com, the number one Internet news site, 2000 Online Cybersex Survey, printed by Business Wire, July 19, 2001. The MSNBC online poll is believed to be the largest Internet study of online sexuality to date. The survey received responses from over 38,000 users. MSNBC Web site surveys are self-selected and unscientific, not the random samples utilized by polling organizations. In 1999, the National Council on Sexual Addiction Compulsivity estimated that 6–8 percent of Americans are sex addicts. (Cooper, Alvin, Dana E. Putnam, Lynn A. Planchon, and Sylvain C. Boies “Online Sexual Compulsivity: Getting Tangled in the Net” Sexual Addiction and Compulsivity, 6:79–104. Taken from Amparano, J. “Sex addicts get help.” The Arizona Republic, p. A1, 1999). Even with a much more narrowly defined definition, the range of those sexually addicted remains between 3–6 percent. Jennifer P. Schneider, M.D., PhD; National Council on Sexual Addiction and Compulsivity Website, October 2000.

5 Sexual Addiction and Compulsivity: The Journal of Treatment and Prevention, Spring, 2000. Based on 1998 survey of 9,265 adults by Dr. Alvin Cooper and others.

8 “Vile Passions,” an article on the effect of pornography reprinted in the AFA Journal, August 2002, by Rusty Benson.

9 “Legitimate Violence, Violent Attitudes, and Rape: A State-Level Analysis” (with Larry Baron and Murray A. Straus). Annals of the New York Academy of Sciences, Vol. 528, 1988.

25 The study was conducted by NetValue, Internet activity measurement service (December 19, 2000) and published by “The NetValue Report on Minors Online.” Business Wire.

26 The Attorney General’s National Study Commission on Pornography, 1970 and 1986.

30 For the text of the interview with Dr. James Dobson, see http://www.pureintimacy.org/online1/bundy.html.

31 Thanks to Luke Griffin and Mike Benson for research assistance.