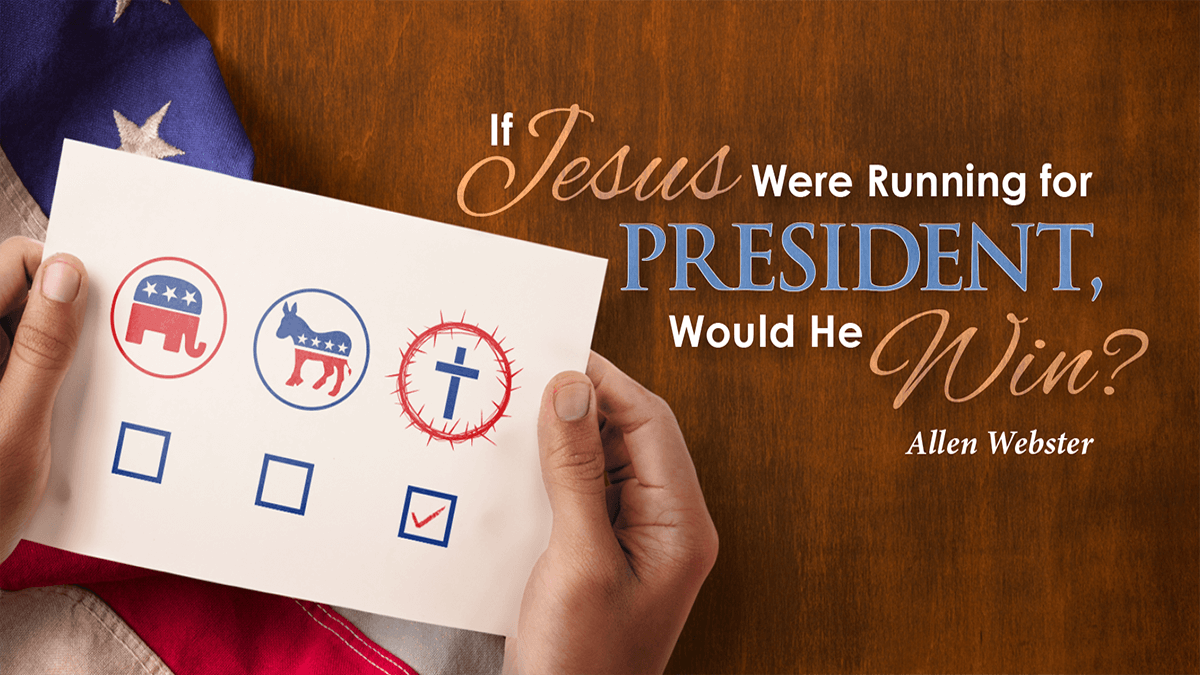 Home Editorial If Jesus Were Running for President Would He Win?

As an adult, He was tempted with political power—all the kingdoms of the world (Luke 4:5–6). At the peak of His popularity, adoring people tried to forcibly crown Him king (John 6:15). At the end, Pilate judged Him on charges of seeking political power (Matthew 27:1–2, 11).

In each instance, Jesus showed no interest and explained that He was no threat to rulers, for His “kingdom is not of this world” (John 18:36).

It is safe to say that American candidates would have nothing to fear if Jesus were here. He wants no seat in the Oval Office.

One’s first impression might be, “Jesus would win by a landslide. He is well-known, trusted, loved, and the greatest leader the world has ever seen.” Second thoughts would produce, well . . . second thoughts.

The Prince of Peace (Isaiah 9:6): An Attractive Candidate

Jesus had no form, comeliness, or beauty to draw people to Him (Isaiah 53:2), but His personality and lifestyle led common people to hear Him gladly (Mark 12:37). Thousands—Jews and Gentiles—came to see and hear Jesus (John 12:20–21).

He had no skeletons in His closet, no little black book of off-the-record relationships to be discovered to His shame, no sins to derail His candidacy (Hebrews 4:15).

Everybody, it seems, has an opinion about Jesus; many radically different—even contradictory—groups claim Him as an advocate of their worldview. It is safe to say that preconceived views are often not in line with what Scripture says of Jesus. In the worst cases, He is blasphemously associated with sinful behaviors—His “brand” hijacked and twisted to endorse viewpoints He abhors. In others, He is simply misunderstood as He sometimes was when He walked among men. Inevitably He would be controversial today, as He was then (Luke 5:30; 10:30–37; 15:2; 19:7).

Everybody, it seems, has an opinion about Jesus

Where might Jesus stand on today’s issues? Society in His day faced many of the same issues, so we can construct an informed platform for His campaign from His speeches, conversations, actions, and Bible verses.

Would one be elected today who held the beliefs Jesus held?

“All things whatsoever ye would that men should do to you, do ye even so to them” (Matthew 7:12). “Righteousness exalteth a nation: but sin is a reproach to any people” (Proverbs 14:34). “All thy commandments are righteousness” (Psalm 119:172). “All the nations that forget God” shall be turned aside (Psalm 9:17). Jesus’ teachings were designed for individuals, not governments, yet if all citizens—including politicians—followed His doctrines, the nation and world would improve overnight.

Jesus saw all men—Jews, Samaritans, Gentiles—as made in God’s image (Genesis 1:26) and as sinners needing redemption (Romans 3:22–23). A seemingly chance meeting with a Samaritan woman at a well (John 4) shows Jesus dealing with the three major barriers among people:

Hatred between Jews and Samaritans had existed for centuries. Most Jews avoided traveling through Samaria at all.

Samaritan women were seen as unclean from the cradle (Mishnah Niddah 4:1). Most Jewish men would not talk publicly with any woman (John 4:27), especially not a Samaritan woman.

The temple on Mount Gerizim was a point of contention to the Jews from the time of its construction.

Seizing the opportunity to tease a thirsty man, the woman brought up these differences (John 4:19–24). She thought it was sheer need that compelled Him to ask her for water, but Jesus’ kind acceptance led her to believe He was the Messiah (4:9, 11, 19, 24). Later, this led many others in Sychar to follow Him (4:39).

Socialism and Christianity differ in freedom of choice. Socialist governments take and redistribute wealth. Christianity leaves the one with money a choice. The gospel encourages and fosters a giving spirit (2 Corinthians 8:3) but does not coerce it.

Jesus’ teachings encourage work for wages: “The laborer is worthy of his hire” (Luke 10:7; cf. Proverbs 16:26). A landowner in Jesus’ parable had the right to do what he wanted to with his money (Matthew 20:15; cf. Naboth, 1 Kings 21). At the same time, Jesus strongly opposed greed. “A man’s life consisteth not in the abundance of the things which he possesseth” (Luke 12:15).

Jesus often spoke out for human rights on behalf of oppressed people. Yet He was balanced, speaking both of a society’s responsibility to help others and an individual’s responsibility to help himself. Under normal circumstances, each is to bear his “own burden” (make his own living) (Galatians 6:5); under emergency or extreme circumstances, others (society, Christians) are to bear “one another’s burdens” (Galatians 6:2).

Jesus was pro-work. “If any provide not for his own, and specially for those of his own house, he hath denied the faith” (1 Timothy 5:8). “If any would not work, neither should he eat” (2 Thessalonians 3:10).

Jesus did not try to please anyone but His Father (John 8:29). The record of His life shows that He neither tried to stir up nor avoid trouble. On one hand, He did not strive, lift up His voice in the streets, break “a bruised reed,” or quench a “smoking flax” (Matthew 12:20; cf. Isaiah 42:1–4). He sometimes moved to another city when controversy was inevitable (Luke 4:28–31).

On the other hand, Jesus never adjusted His message to please people. To Him the right path was the unpopular one: “Enter ye in at the strait gate: for wide is the gate, and broad is the way, that leadeth to destruction, and many there be which go in thereat” (Matthew 7:13). Do not “follow a multitude to do evil” (Exodus 23:2).

Jesus’ motto was, “Love your neighbor as yourself” (Matthew 22:39). He taught to turn the cheek (Matthew 5:39), give the cloak (5:40), walk another mile (5:41). Isn’t this better than “every man for himself, demand your rights, agitate, intimidate, and regulate”? Healthy societies focus on responsibilities more than rights.

Surprisingly, Jesus was no big fan of public prayer, at least not as practiced by the Pharisees (Matthew 6:5–6). Jesus prayed publicly on occasion (John 11:41–42; 17:1–26), but He might not be religious enough for some who profess to follow Him today. Possibly He would call some the same names—hypocrites, fools, blind—that He did their counterparts in the first century (Matthew 23). It is ironic that the holy Son of God was crucified primarily because He was not “holy” enough for religious leaders in His day (Matthew 9:10–11; 11:19).

In our media-driven, hypersensitive, hide-behind-your-keyboard-and-fire-away culture, the great American virtues of Freedom of Speech and Freedom of Religion are pushed to a back burner. The trait of tolerance is championed—so long as one holds to the party line. If a person dares to exercise his freedom of speech in taking a view differing from the mainstream—especially if it originates in the Bible—then tolerating him no longer seems a virtue. Jesus might say, “Judge not, that ye be not judged” (Matthew 7:1). “Woe unto them that call evil good, and good evil” (Isaiah 5:20).

Jesus never married. Thus He had no wife or mother-in-law. Jesus never fathered children, so He had no daughters or granddaughters. He never had a romantic relationship, so no girlfriends. He had a mother and sisters. He had female friends and followers. Even with this limited personal experience, Jesus knew the fairer sex (John 2:25). Women were never objects to Jesus. They were not property. They were not tools to be used or slaves to be exploited. More than any other individual in history, Jesus raised the status of women.

“When Elisabeth heard the salutation of Mary, the babe leaped in her womb” (Luke 1:41; cf. Matthew 19:12). “Before thou camest forth out of the womb I sanctified thee” (Jeremiah 1:5). “Cursed be he that taketh reward to slay an innocent person” (Deuteronomy 27:25). One of the seven things the Lord hates is “hands that shed innocent blood” (Proverbs 6:16–17). Jesus was not anti-women, but He was pro-children. He loved them; He took time for them. He held them and held them up as examples of how all should behave (Matthew 18:3; 19:14).

“Have ye not read, that he which made them at the beginning made them male and female, and said, For this cause shall a man leave father and mother, and shall cleave to his wife: and they twain shall be one flesh?” (Matthew 19:4–5). “To avoid fornication, let every man have his own wife, and let every woman have her own husband” (1 Corinthians 7:2). “Even their women did change the natural use into that which is against nature: and likewise also the men, leaving the natural use of the woman, burned in their lust one toward another” (Romans 1:26–27; cf. 1 Corinthians 6:9–11; Genesis 19).

The Resurrected Lord and Savior: The Winning Ticket

None of these is the most crucial issue. The thing most critical for each voter is not who is president, but who is Lord. It is not how the election affects the pocketbook, but how one’s decisions affect his soul. “What is a man profited, if he shall gain the whole world, and lose his own soul?” (Matthew 16:26).

When Jesus comes, He will not be president. He will be King, and every knee shall bow and every tongue shall confess (Romans 14:11). How will you mark the ballot for Lord of your life and Savior of your soul?

The polls are open.