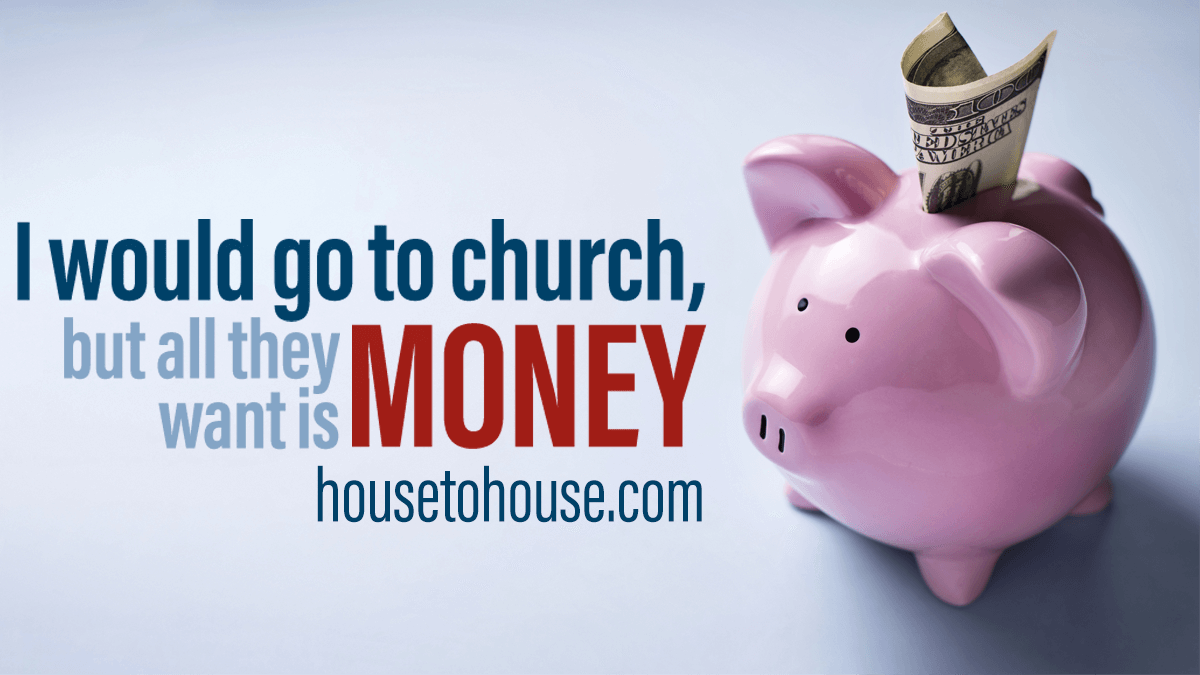 Home Editorial I Would Go to Church, but All They Want is Money

Money can be a sensitive topic. Many have been turned away from Christianity because of religious leaders’ attitudes toward money. Not a few had bad personal experiences in churches due to it. It is not uncommon to hear things like these:

Jesus was angry with such abuses in His day (cf. Mark 3:5). True Christians oppose this as strongly—if not more so—than those on the outside. Bad apples and false teachers block the path for people to find God’s love, grace, and truth.

It is fair to say that most religious groups are not trying to bilk innocent people, but no one would deny that it is important to emphasize God’s standards. God’s way is always the best and only safe course in religion (2 John 1:9–11).

Let’s explore how money issues are handled by those seeking to restore New Testament Christianity. This is what you can expect if you come for a visit.

In the church of Christ, guests are never expected to give.

If you honor the church with a visit, you are not expected to put anything more than an attendance card in the plate. Why should nonmembers support the church? Would we invite someone to our house for dinner and then ask him to pay for it?

When one becomes a member, then giving is a personal worship decision. God set up His work to be fully supported by His people giving freely in their weekly meetings (1 Corinthians 16:1–2). Since there is no Bible authority (Colossians 3:17) for other funding models (such as cake sales or car washes), we do not solicit funds from nonmembers by sales or donations.

In the church of Christ, preachers are not in charge of the collection.

The New Testament shows elders (shepherds, bishops) overseeing finances. When there was a famine in the days of Claudius Caesar, the disciples sent the money “to the elders” in Judaea (Acts 11:28–30).

Most preachers are conscientious and honest, so no disrespect is intended, but there are good reasons for elderships to handle contributions:

In the church of Christ, giving is an infrequent sermon topic.

Stewardship is a Bible subject, so it is covered when it comes up in studying a Bible chapter. It is a part of worship, so it is included in a sermon series on worship. Yet on any given Sunday one would much more likely hear a sermon on Jesus, grace, salvation, love, Calvary, the church, family, obedience, joy, practical Christian living, forgiveness, baptism, hope, or heaven. It is safe to say that no member would ever feel he heard more about money than about God, Jesus, and the Spirit.

In the church of Christ, no one ever receives a bill for contribution.

It is not uncommon for denominational churches to send members notifications if their monthly or annual contributions fall short. According to ABC News, one Florida church sent a single mother a notice that she owed $1,000 (the minimum of $50/month, plus two special offerings per year). Failing to pay, she would no longer be considered a member. Christianity Today reported that another preacher refused the funeral of a 93-year-old member because she had stopped giving. He explained: “Membership has its privileges.”

Jesus criticized the Pharisees for binding “heavy burdens” on people (Matthew 23:4). God does not expect any to give more than their fair share. The Bible says, “If there be first a willing mind, it is accepted according to that a man hath, and not according to that he hath not. For I mean not that other men be eased, and ye burdened . . . that there may be equality” (2 Corinthians 8:12–14).

The beautiful thing about the way God set up giving is that the rich have no advantage, and the poor have equal opportunity. When a poor widow gave only two pennies, Jesus excitedly told His disciples that she had given more than the rich (Luke 21:1–4). How? Because God counts giving by the love and trust we show by our offering. The poor thus have the opportunity to be the best givers in every church, without being burdened.

In the church of Christ, tithing and “first fruit offerings” are not practiced.

Mandatory tithing (giving ten percent) is the cornerstone of many churches’ teaching on giving, but it was not part of the early church’s practice. Tithing was part of Moses’ Law (Leviticus 27:30; Malachi 3:10), which went out of date two thousand years ago (Colossians 2:14).

In the New Testament, Christians are not commanded to give a specific percentage, but simply as prospered (1 Corinthians 16:2), cheerfully (2 Corinthians 9:7), and generously (Acts 2:44–45; 2 Corinthians 9:6). It is not wrong to give ten percent, but it is wrong to require it. Leaders can bind no more than the apostles commanded (Matthew 16:19; 18:18). As Christians prosper and grow spiritually, they will often give more than ten percent, but this is a personal decision and not a church mandate.

Some churches require a “first fruit offering.” Based on Old Testament teaching (Exodus 22:29; 23:16; Proverbs 3:9), members are told they must donate the year’s first paycheck or the first check one receives from a new job or promotion. First-fruit offerings were Israel’s agricultural offerings and are not for the church. Not giving God financial leftovers is the real principle to be gained from these Scriptures (Matthew 6:33; Romans 15:4).

In the church of Christ, only one weekly offering is taken—without fanfare.

Christians do not need to be endlessly prodded to give and should never be manipulated. Ministers are out of line when they make emotional appeals or panic pleas regarding the church’s financial needs before each collection. It is irresponsible to encourage people to put large donations on credit cards by promising that God will pay them back. Why have multiple offerings each week—during the Sunday service, Bible classes, night services, revival meetings, parenting classes—when one accomplishes God’s purpose? Under such circumstances, visitors feel uncomfortable—even needlessly guilty.

One preacher made an emotional speech before passing the plate. He then walked back to the pulpit and said, “You are going to think I’m crazy, but God says give again. God says give everything; don’t hold anything back.” The tempo picked up and the preacher shouted, “God says run!” The offering ended with people surging toward the altar like music fans rushing a concert stage (CNN). The late televangelist Oral Roberts told followers that God would “call him home” if they did not give more money. Such modern-day money changers are similar to those Jesus threw out of the temple, saying, “Make not my Father’s house an house of merchandise” (John 2:16; cf. Matthew 21:12–14).

In the church of Christ, giving is kept confidential.

Jesus prescribed two rules for giving: quietly and anonymously. The Pharisees had turned giving into theater, which He roundly criticized, saying,

Take heed that ye do not your alms before men, to be seen of them: otherwise ye have no reward of your Father which is in heaven. Therefore when thou doest thine alms, do not sound a trumpet before thee, as the hypocrites do in the synagogues and in the streets, that they may have glory of men. Verily I say unto you, They have their reward. But when thou doest alms, let not thy left hand know what thy right hand doeth: that thine alms may be in secret (Matthew 6:1–4).

Today, when members choose to give cash, no one ever knows the amount an individual contributed. If they use checks (for tax deductions), only those who tally the deposit (usually elders) know. Names and amounts are never published for others to see.

Confidentiality is maintained to avoid two spiritual problems: shaming the poor and elevating the rich. James insisted that churches respect the poor (James 2:1–5). VIP treatment—special seating, publishing names—violates the rule of not giving to be seen of men (Matthew 23:5; Acts 5:1–10). Jesus did not praise big offerings; He praised great faith (Matthew 9:22; Mark 10:52; Luke 17:6).

It’s safe to visit. Leave your wallet at home.

LEARN HOW TO SEND HTH TO YOUR COMMUNITY