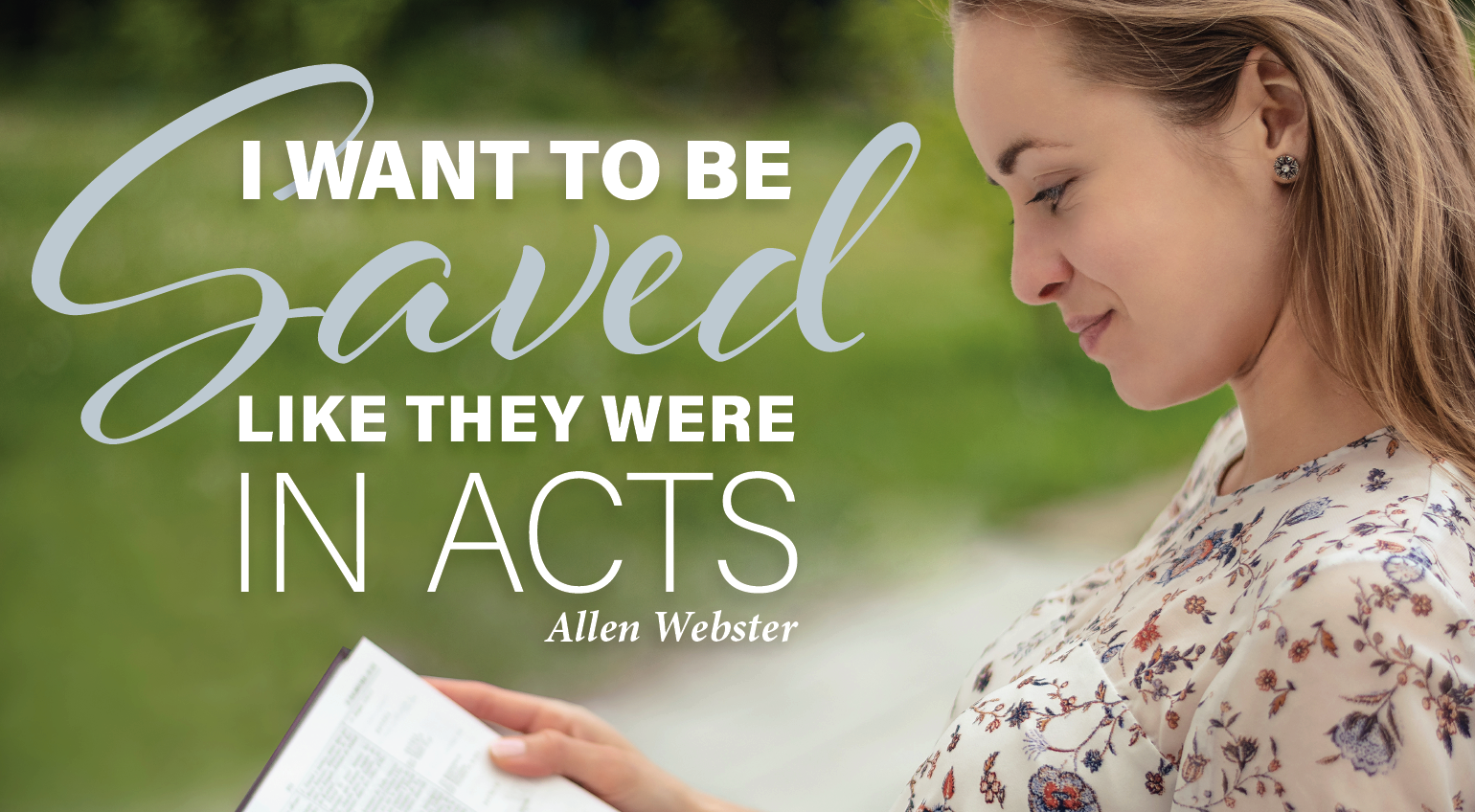 The New Testament books of Matthew, Mark, Luke, and John record the life, teachings, commands, and promises of Jesus. One promise was, “I will build My church” (Matthew 16:18). One command was, “Go into all the world and preach the gospel to every creature” (Mark 16:15).

The book of Acts is based on those two verses. Acts 1 records Jesus’ ascension to heaven; Acts 2 records the building of His church; Acts 3–28 record Christians taking the gospel to the world.

The good news, aided by God’s Spirit, flowed down Mount Zion with such momentum that it soon spread from Jerusalem to Judea, Samaria, and the faraway capital of Rome (Acts 1:8; Isaiah 2:2–4). It had such force that it still circles the globe today.

Preachers are quick to talk about what man must do to be saved, but the discussion of salvation begins with what God did and does. God loved man and initiated salvation when men were sinners (John 3:16; 12:47; Acts 10:36; Romans 5:6–8).

What the Apostles Taught

Some were not converted, but many were. We will look for a pattern of how sinners were saved in Acts. Read these in your Bible and draw your own conclusions (Acts 17:11).

Conversion 1: 3000 Jews on Pentecost (Acts 2:22–47). Acts 2 records the beginning of the church. The Jewish feast of Pentecost had brought devout Jews to Jerusalem from many places. The day began with the coming of the Holy Spirit (2:1–13). When people came to see what was happening, they heard the apostles speaking in all the tongues of the people. Some thought they were drunk (2:12–13).

Peter denied that and explained this event fulfilled Joel’s prophecy (Joel 2:28–32). Peter concluded, “Let all the house of Israel know assuredly that God has made this Jesus, whom you crucified, both Lord and Christ” (Acts 2:14–36).

In a few places in Acts (4:1–4; 17:34), as here, “believe” is used as a summary or a synecdoche. Synecdoche is “a figure of speech by which a part is put for the whole.”1 When Moses said not a “hoof” shall be left behind (Exodus 10:26), he used a synecdoche, as does a cattleman who says he has “ninety head of cattle.” Jesus used synecdoche in John 3:16: “Whoever believes in Him should not perish but have everlasting life.” He permitted belief, which is only one condition of pardon, to stand for all the conditions.

This does not make repentance or baptism unnecessary any more than God’s granting Gentiles “repentance to life” (Acts 11:18) makes belief unnecessary.

Conversion 8: The Philippian Jailer and His Household (16:26–34). When Paul and Silas met a demon-possessed girl, they cast out the demon, which got them cast into prison. After an earthquake, Paul stopped his jailer from committing suicide. The jailer asked what to do to be saved (16:30).

Paul said, “Believe on the Lord Jesus Christ, and you will be saved” (16:31). To understand this, one must consider the context and full response (16:22–24).2 The jailer was a Roman. He was at best irreligious, and at worst a pagan.

Why would Paul say, “Repent and be baptized for remission of sins” to one unfamiliar with God, Jesus, penitence, baptism, sin, and forgiveness? Paul gave the short answer and then taught him what belief involved.

(See chart. I=implied). No single conversion records all that is involved in a sinner’s salvation. Taken together, though, they show a clear pattern. To be saved, a sinner must hear, believe, repent, confess, and be baptized (Mark 16:15–16; John 3:3–5). A convert receives salvation, the gift of the Spirit, church membership, joy, and community. Then one must remain faithful (Acts 2:42; Revelation 2:10).

Since the entirety of God’s word is truth (Psalm 119:160), and God is no respecter of persons (Acts 10:34–35), we must take the whole as what God requires for salvation. Every person who is truly saved is saved the same way.

Salvation is like a combination safe. Its lock will open only after certain numbers are entered in sequence. If a combination is: turn right to 3, left to 10, right to 7, left to 4, and right to 1, then it will not open if one

Man’s response to God’s offer of salvation is like that. The five requirements for scriptural baptism are as follows:

Acts 19:1–7 illustrates salvation’s combination lock. Apollos baptized disciples after teaching them outdated doctrine—John’s baptism, which was replaced at the cross (John 3:23; Colossians 2:14). John’s baptism differed from Jesus’ baptism in the order of the commands (repent/believe instead of believe/repent, Mark 1:153), required no confession of Jesus, and was not in the name of the Father, the Son, and the Holy Spirit.

This combination did not work, so Paul correctly taught and baptized them.

Following Acts is the correct path. You are invited to visit the church of Christ in your community, where you will find this taught and practiced.

2 The thief on the cross (Luke 23:43), often appealed to for deathbed, faith-only conversion, lived under Moses’ Law. As one saved prior to Jesus’ testament (Hebrews 9:15–17), he can no more be an example of how to be saved today than Naaman, Jonah, the Samaritan woman, or Bartimaeus. Jesus had not been resurrected; the Great Commission had not been given; the church (kingdom) did not yet exist.

3 John urged people to repent of not keeping the Law and to believe on the One to come. Great Commission baptism requires people to believe in Jesus

(who has come) and to repent of sins.