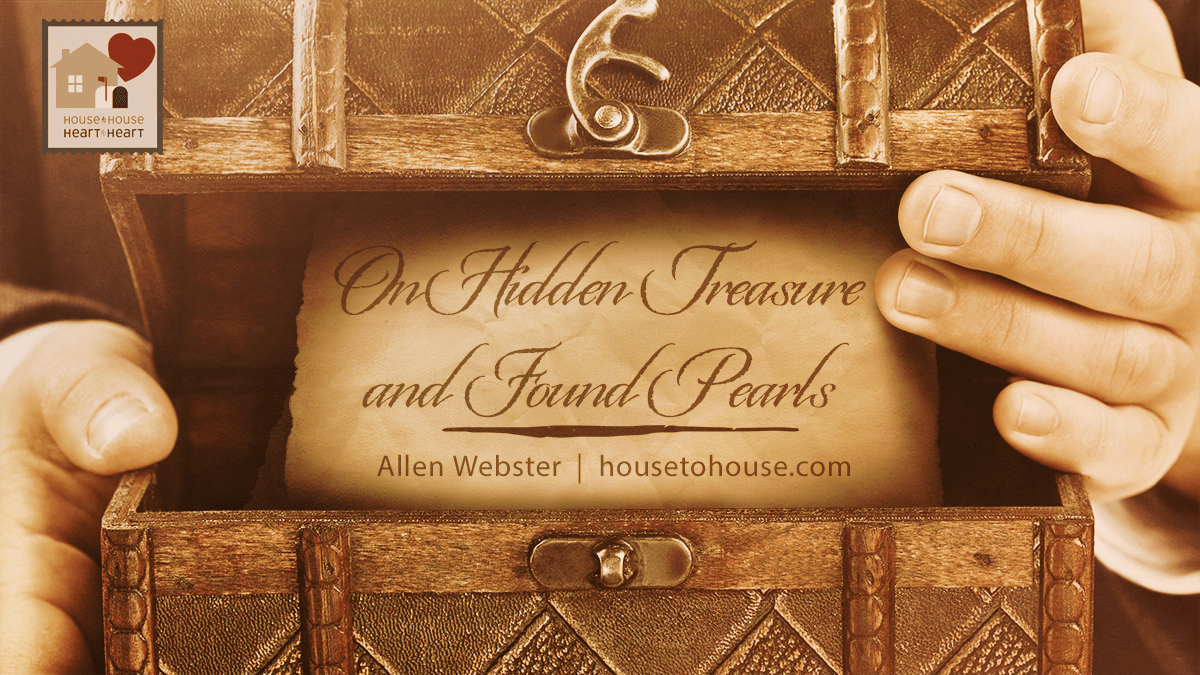 Jesus gave twin parables to teach the same lesson: salvation is worth giving up everything to possess. The first is of a man who stumbles upon hidden treasure in a field. He gladly and quickly sells his property to purchase that field (Matthew 13:44). The second is of a jewel merchant searching for high-quality pearls. When he discovers a singular pearl of great value, he rushes to liquidate all his stock and comes back to gladly exchange everything he owns for it (13:45–46).

Like that man finding hidden treasure, we must be wise enough to recognize true riches when we find them.

Years ago, a peddler in a rickety wagon stopped at a widow’s shack. “I buy relics,” he announced. “I don’t have anything,” she replied. “How about that cannonball?” he asked. “Oh, my boys found that long ago. I keep it because I have good memories of them playing with it.”

“I will give you twenty-five dollars,” he said. Her eyes widened in surprise. “Take it!” After he paid her, he took an ax from the woodpile and chopped the ball open. Inside were gold nuggets! He gave her half, which she later sold for seven thousand dollars. Like her, sinners have gold nuggets within the covers of the Bible but may not ever discover them.

Like the pearl merchant, all should search as diligently for salvation as men do for gold and diamonds.

A major diamond mining company in South Africa specializes in mining coastal areas where gems are below fifty feet of stone, gravel, and sand. After giant earthmovers remove cover layers, men dynamite the diamond-bearing layer and then excavate it with hydraulic water pressure. Using large nylon brushes, workers sweep all crevices to miss nothing. Then they pound, wash, and sift the soil to discover every possible diamond. One hundred eighty million parts of earth are processed to yield one-part diamond (cf. Job 28:1–7, 10–11).[1]

Like the pearl merchant, a wise person pursues what is truly valuable.

Most people waste their lives gathering trinkets. Sir Titus Salt (1803–76) was a manufacturer, politician, and philanthropist in Yorkshire, England, who built Salt’s Mill, a large textile mill, with an attached workers’ village called Saltaire. He was so famous and beloved that 100,000 people lined his funeral route.[2] When he was old, highly honored, and very rich, he stood in his garden and watched a snail slowly climb a stick. When this slow-moving creature finally reached the top, it paused for a moment, then turned and began a descent. Salt commented, “I am like that.” We marvel how one can possess so much and yet have so little of real wealth.

I bargained for a penny and life would give no more,
However, I begged at evening when I counted my scanty score.

For life is a just employer, she gives us what we ask;
But once we have set the wages then we must bear the task.

I worked for a menial’s hire, only to learn dismayed,
That whatever I had asked of life, life would have gladly paid.

How do we spend our lives? What do we receive in exchange for our work? Years ago, some boys stood beside the flooded Tennessee River. They saw a rabbit, flooded from its burrow, take refuge on a lumber stack about a hundred yards out from shore; it could go no farther. “I want that rabbit,” said one boy. He got into a frail canoe and paddled out to the lumber. He caught the rabbit and put it in his overalls pocket. On the way back, in the treacherous current, he lost control, capsized, and drowned. Later when his body was found, his friend drew the dead rabbit from his pocket. Holding it up, he said, “This is the thing for which he gave his life.” How sad! Yet much of what passes for a success in the world’s eyes is equally worthless.

Isaiah asked, “Why do you spend money for what is not bread?” (Isaiah 55:2). Paul prayed for Christians to have the wisdom to approve the things that are excellent (Philippians 1:10).

When the multitude madly scrambles after worldly things, we must not follow them. Clovis Chappell used this illustration:

As a boy, I used to feed pigs. I would pour out a basket of corn that was ample for all. But often one foolish pig would greedily grab an ear and set out running as desperately as if he had cornered the corn crop of the whole world. Instead of ignoring this foolish fellow, two or three other pigs would set out after him, leaving scores of ears just as good lying on the ground. What was the matter? They figured that their companion who was running so frantically had to have something better than what they could get elsewhere. We, too, are taken by the pig-philosophy. How many venture our lives in pursuit of prizes whose worth we have no better proof than that they are being sought by the crowd.