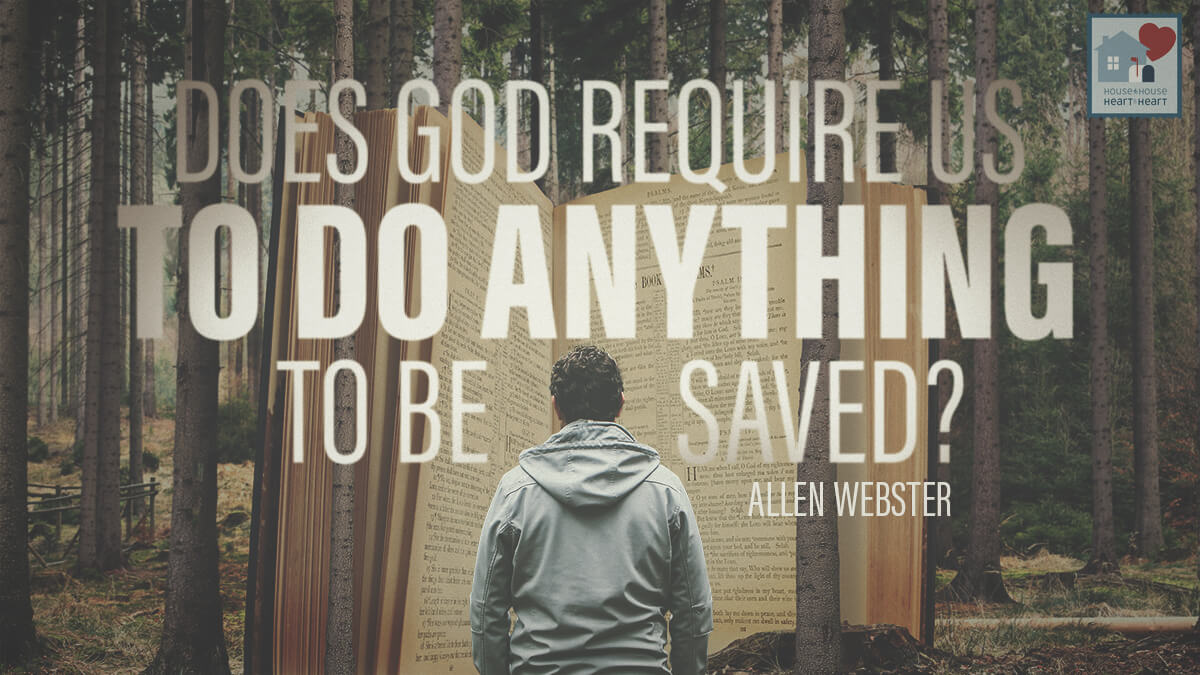 Home Editorial Does God Require Us to Do Anything to Be Saved?

A young man asked his preacher: “Sir, what can I do to be saved?”

“No,” said the preacher, “too late to do anything. You see, son, Jesus already did it all two thousand years ago.”[1]

Is this the case?

First, observe that there is no way to make salvation works-centered and man-centered. It is grace-centered and God-centered. Paul wrote, “By grace you have been saved through faith, and that not of yourselves; it is the gift of God, not of works, lest anyone should boast” (Ephesians 2:8–9). The emphasis is on what God does for man, not what man does for God. The little wheels run by faith and the big wheels by the grace of God.

When David Lipscomb was an old man on campus a student asked him, “Upon what do you base your hope of salvation?” Without hesitation, he said, “Upon the grace and the mercy of God.” That is the only hope any person has of salvation.

Does grace require a sinner to do anything? Did Jesus do it all at Calvary?

This view is inconsistent with how God’s acts of grace were received from the beginning. The Old Testament was written for our learning (Romans 15:4). What does it teach about God’s grace and man’s response?

This view is inconsistent with what Jesus taught. Jesus came to bring God’s grace to man (John 1:14), but He taught those saved will be those who do “the will of My Father” (Matthew 7:21–23; cf. Luke 6:46). Just after He paid for man’s salvation with His blood, but just before He ascended back to heaven, He said, “Go into all the world and preach the gospel to every creature. He who believes and is baptized will be saved; but he who does not believe will be condemned” (Mark 16:15–16).

This view is inconsistent with what the apostles taught on Pentecost. If there is nothing for man to do, Peter should have responded differently when asked, “Men and brethren, what shall we do?” (Acts 2:37). He could have said, “You are too late. Jesus did it all fifty days ago when He was crucified. There is nothing to do now.” But Peter said: “Repent, and let every one of you be baptized in the name of Jesus Christ for the remission of sins; and you shall receive the gift of the Holy Spirit” (Acts 2:38).

God saved those on Pentecost by grace, yet Peter told them to “save yourselves” (Acts 2:40). How can salvation be “not of yourselves” (Ephesians 2:8) and we save ourselves? When man submits to God’s commands, God is saving him. He has not earned anything. He has only saved himself in the sense that he trusted God enough to take His free gift (Romans 6:23). In this case, only three thousand of that immense crowd were saved that day. Why? They saved themselves by obeying God’s command to repent and be baptized (2:38, 41). They earned nothing. They deserved nothing, but they were saved. Others disobeyed God’s messenger that day. They remained lost.

When we throw ourselves upon God’s grace by meeting the conditions He attached to it, do we earn salvation? No, and neither do we in any sense deserve it, yet He only gives it to those who respect His will enough to do what He tells them to do (Hebrews 5:8–9).

This view fails to differentiate between different kinds of works. Bible words can mean different things in different contexts. For instance, Christians are not to love the “world” (James 4:4), but God “so loved the world” (John 3:16). In one case, world means sinful activities (cf. 1 John 2:15–17); in the other, it means the people who live in the world.

The word works is like that. Some works are excluded from the scheme of redemption, including:

This view is inconsistent with Paul’s conversion.

Did Paul, for example, understand salvation by grace when he himself was saved? When Saul (later, Paul) was on the way to Damascus, the Lord appeared to him. Recognizing his great sin of persecuting Christ, he asked, “Lord, what do You want me to do?” (Acts 9:6). Obviously, he was asking about salvation.

Surely Paul misunderstood due to his Jewish background. He should not have offered to do anything. It was a good thing he was speaking to the Lord who could quickly set him straight. Jesus answered, “Arise and go into the city, and you will be told what you must do” (Acts 9:6).

Did he misunderstand the Lord? Surely the inspired preacher Ananias would clarify things. What did Ananias say when he encountered Saul? “And now why are you waiting? Arise and be baptized, and wash away your sins, calling on the name of the Lord” (Acts 22:16). Paul did not argue for salvation by grace along and faith only. Instead, he “arose and was baptized” (Acts 9:18).

Did Paul later disavow what he did, admitting that he should not have tried to merit salvation by being baptized? In addition to Ephesians 2:8–9, Paul often wrote of the importance of obedience:

He wrote, “God be thanked that though you were slaves of sin, yet you obeyed from the heart that form of doctrine to which you were delivered” (Romans 6:17). The kind of faith that avails, Paul said, is “faith working through love” (Galatians 5:6). He linked grace and obedience together (Titus 2:11–12). He urged Christians to “work out your own salvation with fear and trembling” (Philippians 2:12).

“What shall we say then? Shall we continue in sin that grace may abound? Certainly not! How shall we who died to sin live any longer in it?” (Romans 6:1–2). Some teach that God’s grace will overlook people living in adultery and every other kind of sin. “Shall not the Judge of all the earth do right?” (Genesis 18:25). Bildad the Shuhite asked Job, “Does God subvert judgment? Or does the Almighty pervert justice?” (Job 8:3). On the Day of Judgment, God’s justice will not be overridden by His grace (John 12:48; Acts 17:31; Romans 2:6, 11).

An old Scotsman operated a little rowboat for transporting passengers. One day a passenger noticed that the old man had carved on one oar, the word Faith, and on the other oar, the word Works. Curious, he asked the meaning.

After this demonstration, the old man picked up Faith and Works and began pulling both oars together. The boat sped swiftly over the water.

The old man explained, “You see, that is the way it is in the Christian life. Dead works without faith are useless, and faith without works is dead also, getting you nowhere. But faith and works pulling together make for safety, progress, and blessing.”[2]

James wrote, “What does it profit, my brethren, if someone says he has faith but does not have works? Can faith save him? . . . Thus also faith by itself, if it does not have works, is dead. But someone will say, ‘You have faith, and I have works.’ Show me your faith without your works, and I will show you my faith by my works . . . You see then that a man is justified by works, and not by faith only . . . For as the body without the spirit is dead, so faith without works is dead also” (James 2:14–26).