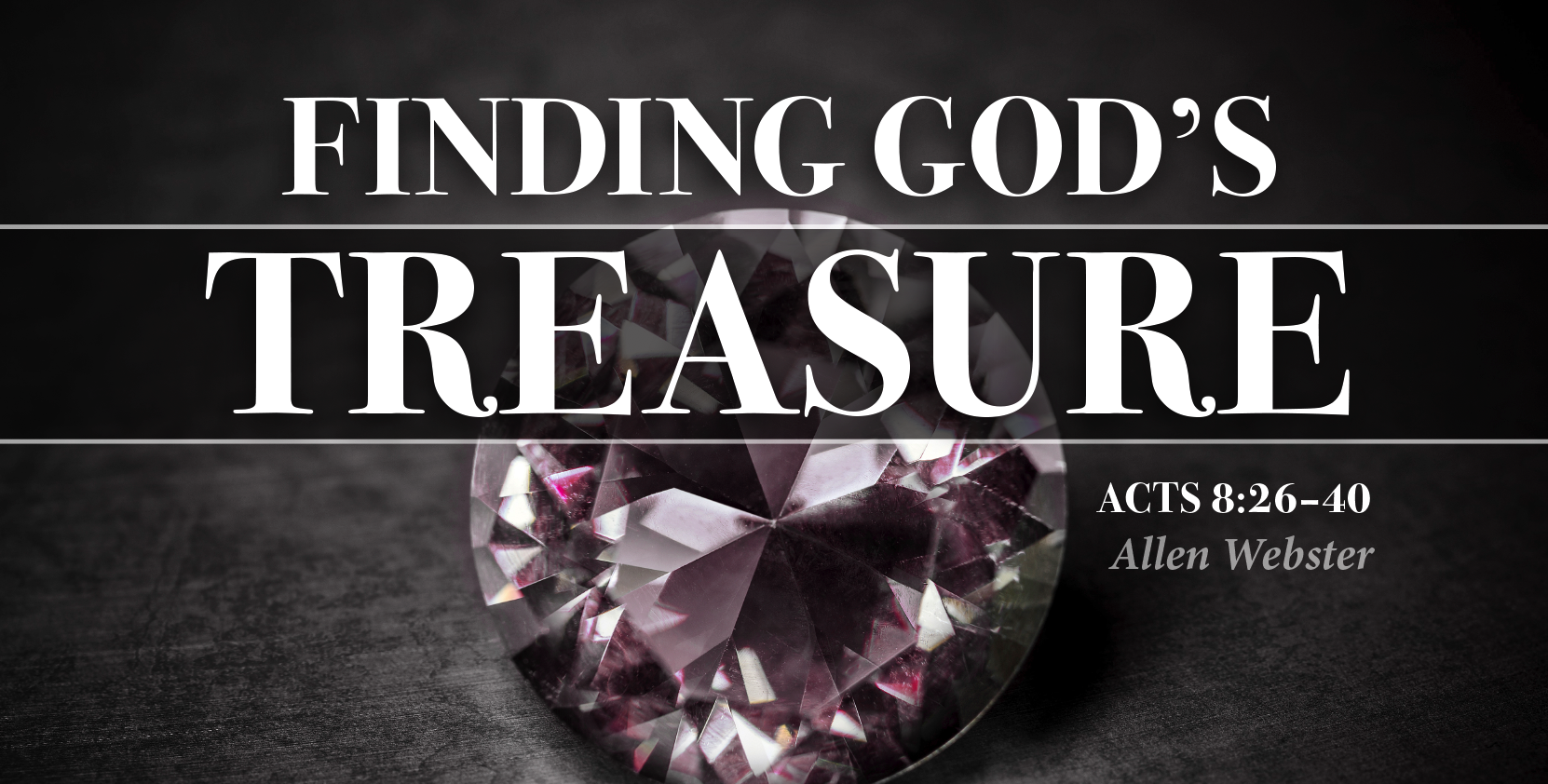 Dr. Williamson, a Canadian geologist, had been slipping along a rain-soaked road that led through Tanzania’s backcountry when suddenly his Land Rover sunk to its axles in the mud.

Pulling out a shovel, Williamson began digging his four-wheel drive out. After some time, he uncovered an interesting-looking pink stone. Being a geologist and naturally curious about rock formations, he picked it up.

The more mud he removed, the more excited he became, hardly believing what he saw. Dr. Williamson had found a diamond!1

Any diamond would have been a surprise, but he had found the now famous giant pink diamond of Tanzania. That muddy stone became the main feature of a famous royal brooch, forming the center of a flower with five petals, with white diamonds forming the petals, and Williamson is world renowned for his find—accidental though it was.

It is interesting that the geologist found the diamond. Similarly, the Bible tells of a treasurer who found a treasure.

Jesus compared a sinner who learns the gospel to one who finds great treasure (Matthew 13:44–46). This is illustrated by an Ethiopian treasurer who found the gospel treasure on a lonely road leading back to Africa from Jerusalem (Acts 8:26–40). Why did he—of all the people—find the treasure that day?

THE TREASURER WAS WILLING TO LOOK FOR SOMETHING MORE

This Ethiopian had traveled fifteen hundred miles (one way) to worship and was still reading his Bible on the way home. Because he was a eunuch, he had not even been allowed into the temple during the ceremonies (cf. Deuteronomy 23:1). You could say he rode three thousand miles to sit in the foyer.

He knew something of the Bible but wanted to know more. He was like a man at sunrise tilting his manuscript to catch the first light. As he read Isaiah’s prophecy of Jesus, he was catching the first rays of the rising sun of Christianity.

Who will find God’s treasure today? Those willing to look. It is available to all, but requires a careful and diligent student (2 Timothy 2:15). One may have to dig out from under denominational teachings and human traditions. One may have to lay aside preconceived ideas and a handed-down family religion.

Many today, like that treasurer, read their Bibles on the way home from church services and wonder why what they have just experienced differs so from what they read in the Bible. If you are one of these, read on . . . . We should never be satisfied with a religion less than what we find in Scripture. We can do better. Christ’s church exists today, and you can be a part of it!

THE TREASURER WAS WILLING TO LISTEN TO ANOTHER VIEWPOINT

When Philip gave the treasurer an opportunity to learn more of God’s Word, he was not rebuffed.

This treasurer was humble enough to admit to a complete stranger that he did not understand what he was studying. (He could have told this aggressive preacher to get lost, but then he would have stayed lost.)

What was the eunuch reading? “The place of the Scripture which he read was this: ‘He was led as a sheep to the slaughter; and as a lamb before its shearer is silent, so He opened not His mouth’” (Acts 8:32). The treasurer listened as Philip showed how Jesus’ death on Calvary and His resurrection from the grave fulfilled Isaiah’s prophecy we read in Isaiah 53.

Jesus was the “Lamb slain from the foundation of the world” (Revelation 13:8; cf. Mark 10:45). A goat, killed in the traditional manner, sends out blood-chilling cries that can be heard a mile away, but a sheep submits to the butcher’s knife without a whimper. Jesus meekly submitted to the outrages perpetrated against Him and offered no more resistance than a lamb being sheared.

“Who will declare his generation? for his life is taken from the earth.” How could one describe a generation of people so blind that they did not recognize God’s own Son, and then murdered Him?2 This was not what the treasurer had been taught in the worship service he had just left. He learned the truth because he was willing to consider another viewpoint.

What about us? Too many religious discussions end with slammed doors and closed minds, raised voices and lowered expectations, and clenched fists and closed Bibles. Are we willing to calmly investigate another perspective? Do we do our own thinking, or do we simply accept what a preacher, friends, spouse, or parents tell us to believe?

Truth never suffers from investigation—if we were right in the beginning, we will simply confirm it with more study. But if we were wrong, we need to know before the Judgment (Matthew 7:21–23).

THE TREASURER WAS WILLING TO LEAVE HIS PAST

As treasurer for his country, he was doubtless an intelligent and industrious man. His religion was good. He was comfortable with it. He knew its customs, understood its theology. It taught high morals and had doubtless benefited his life.

Now the preacher suggested that he give it up for something better. It no longer pleased God and was powerless to grant salvation. What went through his mind? Change religions? Go against my family? Offend my friends? Start over at my age? Admit I’ve been wrong?

Nonetheless, he desired to please God more than others (Galatians 1:10) and was willing to do a hard thing. In heaven, he will never regret his decision—nor will we if we give up false religion (John 12:42) or sinful pleasure (Acts 24:25).

Philip evidently said something about baptism in their study (although Isaiah 53 does not mention it), because the treasurer interrupted this traveling Bible class to point out that they were passing a suitable place for baptism. (Since that was arid country, he may have thought, If I don’t ask now, there may not be another river until after he leaves.)

According to this Bible example and others in the book of Acts, something is wrong today when someone claims to preach Jesus, but whose hearers never request baptism. How can any man preach the gospel and answer the question, “What to do to be saved?” and not give the answer Jesus told us to give (Mark 16:15–16)?

This treasurer may have been wealthy in Egypt before his journey, but he left this scene a far richer man. In the last view we ever get of him, we imagine a smile on his face.

You would rejoice, too, if you had just found God’s treasure.