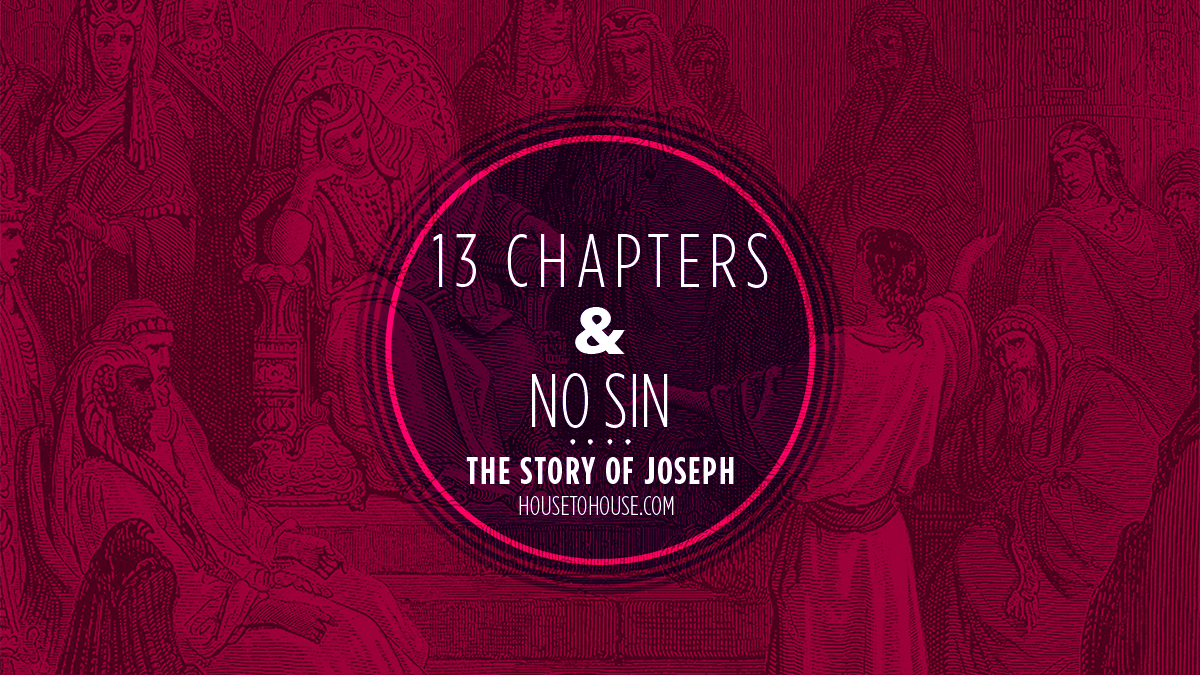 What sin did Joseph commit? Having trouble coming up with one? You are not alone.

More space is dedicated to the life of Joseph than any other patriarch. Thirteen chapters of Genesis are dedicated to his life (Genesis 37-50), which is more than even Abraham (Genesis 12-21). In all those chapters, there is not a single sin marked against his name. This does not mean that he did not sin, for all sin (Romans 3:23). It must mean, though, that he sinned less than most men, and that his sins were of a more misdemeanor kind than some of the other patriarchs and Bible characters.

Joseph teaches us to value righteousness in a culture that enjoys sin.

The things written aforetime were written for our learning (Romans 15:4). Joseph teaches the importance of living righteously regardless of the behavior of others (Philippians 2:15-16).

Joseph lived with his brothers, but they were not good influences on him (Genesis 37). He served in a house with Potiphar’s wife, but he was not like her (Genesis 39). He lived in a prison with men judged unfit to remain among decent people, but he did not sink to their level (Genesis 40-41). He lived in a pagan land, but he kept his faith in God (Genesis 39:10).

Young people growing up in this generation are much like Joseph in Egypt. Like Joseph, our young people have been sold into spiritual Egypt—by drug dealers, by moviemakers, by TV producers, by textbook writers, by popular musicians, by pornography pushers, and by fashion designers. In some ways, today is like the days of Noah when every imagination of man’s heart was only evil continually (Genesis 6:5). It is like living in Sodom when homosexuals openly parade and make their demands (Genesis 19). It is like living in Jerusalem in the apostles’ generation, a crooked and “untoward generation” (Acts 2:41). Gus Nichols used to say, “All of us are living in Potiphar’s house. We may not be able to destroy Egypt, but we can raise up our boys and girls to be Josephs.”

God does not make allowances for living among wicked people (Titus 2:11-14). He does not grade on a curve because most people are failing His tests. The high standard of the gospel was preached unashamedly in the Roman Empire, which was even more wicked than our culture. Consider these verses that were first heard in the land of Nero (with a modern application):

To make this more practical, each might ask, “How long can I go without sinning? If Joseph could go thirteen chapters, can I go 13 days without sin? Can I go 13 hours? 13 minutes?” We must aim high. Let each try to set his/her on personal best this week. It is better to have an impossible goal (sinless-ness) and try to reach it than to have a low goal (be like others) and make it. “Let us go on unto perfection” (Hebrews 6:1; cf. Matthew 5:48).

Joseph shows us that we can avoid sin in every stage and circumstance of life.

Some say we cannot expect young people to be righteous, single men to be virtuous, or businessmen to be honest. Yet Joseph showed a remarkable consistency of high character from youth to old age.

How did Joseph avoid sin?

The child of God does not commit sin when God’s seed remains in him (1 John 3:9; cf. Luke 8:11). As her son left for college, a mother gave him a Bible inscribed with these words: “This book will keep you from sin; and nothing but sin will keep you from this book.” People have hidden Bibles in many places to keep them from being confiscated (baked in bread, in pillows), but the best place to hide the Bible is in the heart (Psalm 119:11). This ensures two things: (1) You will have it when you need it (Matthew 4:4-11); and, (2) It is in the place where is can be the most effective (Proverbs 4:23; 23:7).

Joseph had convictions about what was right and wrong.

The needle of his moral compass pointed strongly toward God. His initial response (“How can I …?”) (39:9) shows how unthinkable it was to him to fornicate with a married woman. Such strength can make one immune to temptation (1 John 2:14). Let each young person resolve to have such convictions. Don’t flirt with temptation. Don’t take a look at sin today, a step toward sin tomorrow, and then dabble in sin the third day. Little steps lead to big sins. Flee from drink, anger (murder), cursing, stealing, lying, gambling, and fornication (Matthew 6:9-12). Lustful looks lead to more, given opportunity (Matthew 5:27-28). Parking, petting, dancing, sexting, and filthy talk are preludes to the awful sin of adultery. Treat every woman as you would like for your mother or sister to be treated (1 Timothy 5:2). (Girls, treat men as you want your brother or father to be treated.)

Whenever we sin, we do so openly before God (Acts 17:24-38). Jonah tried to flee from the presence of the Lord, but found that futile (Jonah 1:3). Years ago, a father took his son with him to steal chickens. The father looked right, left, behind, and in front to make sure no one was watching. His little boy whispered, “Daddy, you forgot to look up.” That’s the direction that we should never forget to look. A fear of disappointing the Lord is a preventive to sin (Exodus 20:20; Proverbs 3:7; Romans 11:22).

Many  foolish trades have been made since Esau exchanged his birthright for a mess of pottage (Genesis 25:29-34). Joseph was not about to make a similar deal by trading his purity for a few minutes’ pleasure. The first rule of those following Jesus is to “deny self” sinful pleasures (Matthew 6:24). Paul wrote, “She that liveth in pleasure is dead while she liveth” (1 Timothy 5:6). Keep yourself pure for the marriage altar so the pleasure can be as God intended it (Hebrews 13:4). While worldly people are unashamed of sexual sins (Galatians 5:19-21), and even some Christians have a blind spot toward it, we should all memorize David’s prayer: “Create a clean heart in me, O God” (Psalm 51:10), and regularly pray: “Lead us not into temptation” (Matthew 6:13). To keep a clean heart, we must fill it with good things (Philippians 4:8) and control the three avenues into it:

He avoided places where it is easy to sin and people who want to sin (Genesis 39:12).

Had Joseph yielded, he would not have been in prison to interpret dreams, not been sent for by Pharaoh to interpret his dream, and not been exalted to high office to save his people. How grateful the church is for all the “Josephs” left in the land. God is with you, as He was with Joseph (Genesis 39:21; Matthew 28:20).