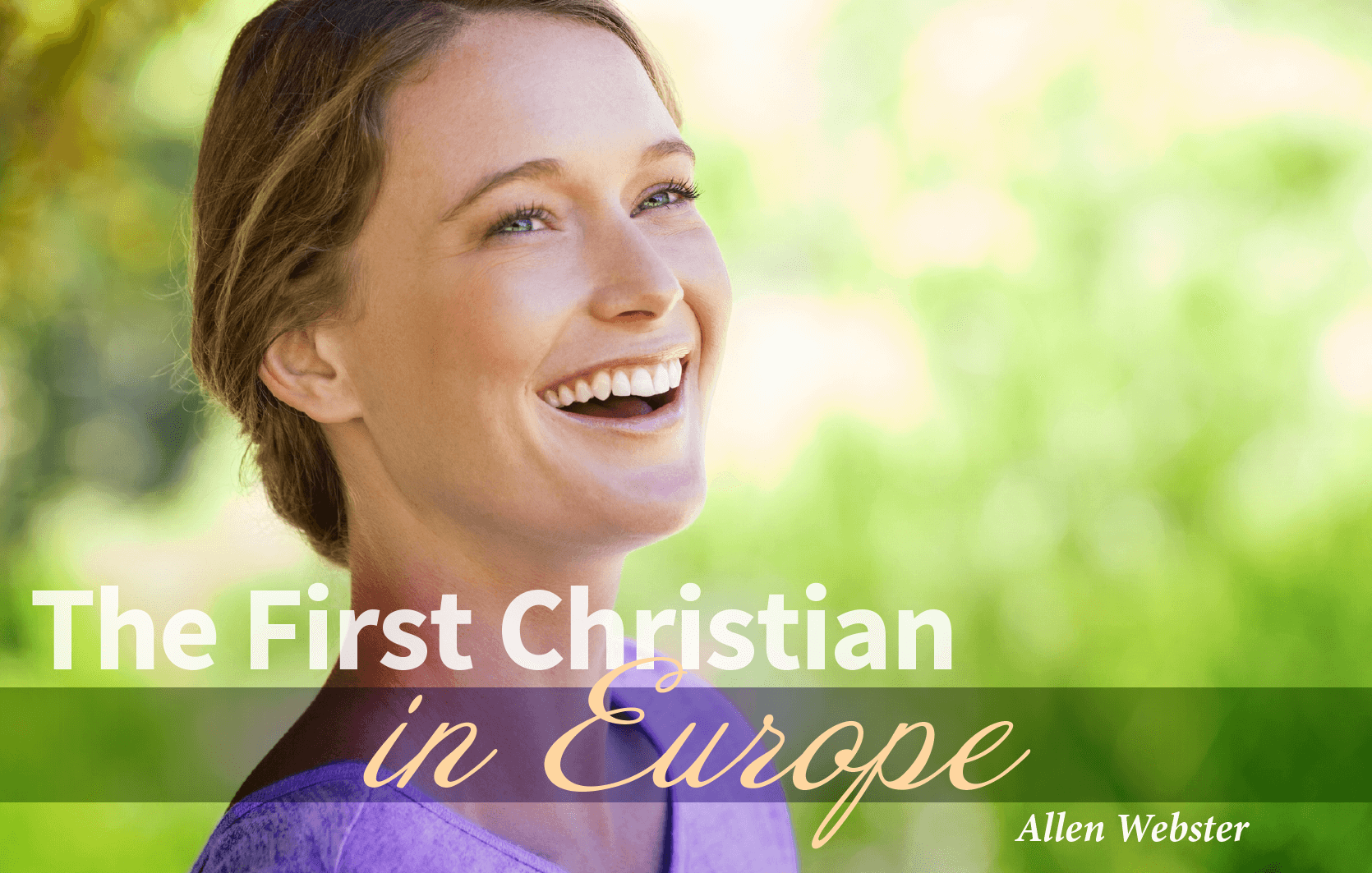 The book of Acts records the quick spread of good news from Jerusalem to Rome through Samaria, Antioch, Asia, and Europe. It gives Spirit-selected examples of conversion to Christ. In some cases, it relates what was preached (the resurrection, righteousness, redemption), and specific responses to it (mocking, denying, accepting).

Near the middle of Acts, Paul leaves Asia for the first time and carries the gospel into Europe. Although his vision was of a man saying, “Come over to Macedonia and help us” (Acts 16:9), the first person to become a Christian in Europe was a woman, Lydia.

Lydia is the only woman whose conversion is detailed. Including her was a departure from first-century culture. In that Greco-Roman pagan world, women were thought of as slaves and generally ignored in historical accounts. Even Jewish rabbis said, “It is better that the words of the Law be burned than be delivered to a woman.”

Jesus forever changed such hateful culture. Whenever His gospel is preached, women are equally invited to receive it (Matthew 11:28–30); everywhere Christianity goes, it elevates women to heights rarely seen in human history (Galatians 3:28); wherever the church is established, women have as important roles to fill as men do (although they differ) (1 Timothy 2:1–15).

Of the thousands converted in that first generation, what made Lydia one of eight included in Acts? What does she teach us?

Lydia listened with one ear closed.

One preacher said, “Some listen with both ears, allowing the gospel to go in one ear and out the other. How much better to have only one ear, so the truth goes in but never out”1 (cf. Isaiah 55:2).

Lydia “heard” (Acts 16:14)—the message went in but did not go out. This placed her under Jesus’ compliment: “Blessed are . . . your ears for they hear” (Matthew 13:16). Others hear but do not hear (Matthew 13:9–15). They are not hard of hearing but hard of heart. Jesus faced some whose ears were full of cotton and whose hearts could not be pried open with a crowbar. He asked them, “Why do you not understand My speech?” (John 8:43)—that is, “Why don’t you listen?” May we never be like them.

Bringing a hard heart to worship would be like wearing earplugs to a concert. The gospel may be explained expertly and preached passionately, yet if there is no desire in a listener’s heart, the message will be lost. One preacher wondered why his sermon had no effect upon an individual he was hoping to reach. “That was as plain as A B C!” “Yes,” his wife replied, “but the man you were talking to is D E F.” Lydia’s example is to listen closely to see whether the things taught are “so” (cf. Acts 17:11).

Jesus spoke of hearts with no room for truth (Matthew 13:15). By that measure, Lydia’s heart was empty. Luke records that the Lord opened her heart (Acts 16:14)—no doubt by hearing preaching, since Paul’s message proceeded it (cf. Romans 1:16; Ephesians 6:17). The truths she had learned in Judaism were stepping stones to Jesus (Galatians 3:24). Like the Ethiopian treasurer, she only needed guidance to better understand them (Acts 8:30–31).

The Bible is a bag of seeds (Luke 8:11), so when Paul scattered the gospel that day, it immediately took root, sprouted, grew, and bore fruit. Satan had no opportunity to snatch it away (Matthew 13:4, 19; cf. 2 Corinthians 4:3–4), for Lydia’s heart was a plowed field.

Lydia attended the sermon she was present to hear.

Since other women had gathered for worship that day (Acts 16:13), Lydia was not the only one who heard the gospel. But she was the only one of them saved (besides her household). Why? Because “she attended unto the things which were spoken of Paul” (16:14).

Attended means to heed.2 Its tense shows sustained attention. The picture is of her putting her hand to her ear, for fear of missing a word. It is possible to come to Sunday services, but not attend. Pews can be full of non-attenders. While in worship, some people are attending the restaurant, the mall, the farm, the kitchen, the shop, the game, or the business instead of the sermon.

Lydia listened with intent to act (James 1:21–25). She weighed matters carefully and compared what was commanded with what she had done. Good preaching always leaves listeners with things to attend.

When Paul presented Jesus’ words to Lydia, “He who believes and is baptized will be saved,” what did she say? Was it, “Well, I need time to consider it”; “I must wait till I talk to my friends and family”; “What will people say?” or, “The water is probably cold today, anyway”?

No, when Lydia heard Jesus’ conditions of salvation, she did not put off until an indefinite tomorrow what would please God today (2 Corinthians 6:2; cf. Isaiah 6:8).

“She and her household were baptized” (Acts 16:15). In every case of conversion detailed in Acts, as here, baptism occurred immediately after learning. In most cases, as here, it was after hearing only one sermon (e.g., 8:35–38).

Lydia was a merchant, so she knew value when she saw it (cf. Matthew 13:44–46). What Jesus offered was worth more than all the purple cloth in Philippi (Matthew 16:26).

Perhaps garments she had sold were worn by Caesar himself, but this did not compare with the King of Kings dressing her in the white robe of salvation (Revelation 7:13–14).

Surely Paul did not miss the opportunity to teach this seller of purple Isaiah’s words: “Though your sins are like scarlet, they shall be as white as snow; though they are red like crimson, they shall be as wool” (Isaiah 1:18). Lydia’s hands might have been stained purple, but her heart was a beautiful shade of white.

Lydia was the first Christian in the western world, but she was not the last.