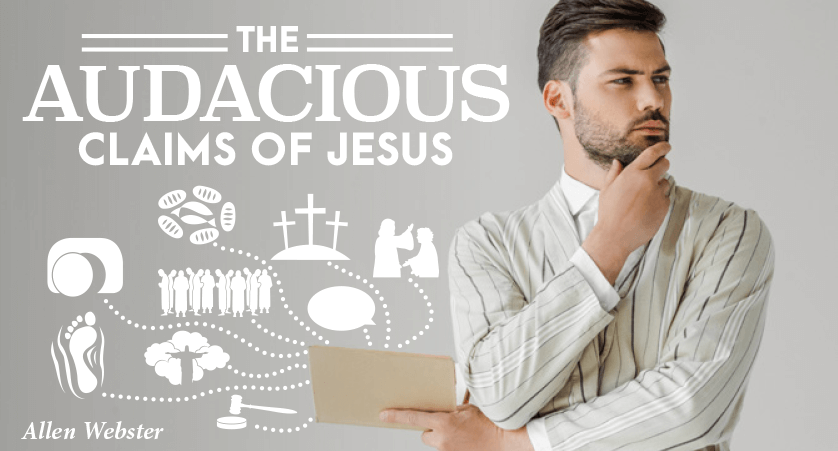 Around ad 30, a rabbi named Jesus came to a Galilean village He had never visited before. Imagine the shock when, in the course of His remarks, He informed them He was God visiting from heaven (Matthew 4:12–16; John 1:14).

Suppose a newcomer to our community joins us next Sunday and mentions that he is the world’s long-awaited Messiah.

What would people think? Perhaps he would be humored and probably treated nicely, but you would not bring your children to meet him. Leaders would keep a wary eye on him; security might be called; and everyone would think him mentally deficient. Neither his assertion—nor he—would be taken seriously.

Jesus made dozens of audacious claims. What did people think?

The most audacious claims of Jesus

The generation living when Jesus came became humanity’s eyes and ears. They saw, heard, touched, and studied Jesus (1 John 1:1–3). They judged His words, deeds, and character firsthand; we did not have that opportunity (cf. John 20:29). Assuming the record is accurate, and that those people were reasonably intelligent and basically honest, the conclusions they reached would have been ours.

How did those respond who heard these incredible words firsthand? Common people heard Jesus gladly (Mark 12:37). His enemies heard Him madly (Luke 6:11). Many found Him believable—accepting Him as the Messiah for whom people were waiting (John 7:40–41).

Others considered Jesus’ claims blasphemous (Matthew 26:65) and self-promoting, but they did not dismiss Him out of hand. They challenged, “Are You greater than our father Abraham, who is dead? And the prophets are dead. Who do You make Yourself out to be?” (John 8:53). They hated Him, but they could not ignore Him.

His followers were believable witnesses; His opponents were hostile, but still witnesses. Neither group was gullible nor inclined to accept Jesus’ claims without consideration (Mark 9:19; 16:14; Luke 24:25; John 20:27). People who knew Him either loved Him or hated Him, but nobody said, “Well, Jesus is a great teacher, perhaps misguided, but a good man.”

What credentials made Jesus’ claims credible?

The quality of His life. Words and actions are the primary windows into a person’s character. Jesus’ speech and deeds are recorded in Matthew, Mark, Luke, and John.

Critics charge that the gospel accounts are not accurate history. To the contrary, Jesus’ biographies are the earliest and best records available. In many cases, they are eyewitness reports; in all cases they are contemporary, first-century sources. They are reliable; no contradiction or factual error has been proven.

Archeology verifies that four biographies of Christ were written within the lifetime of people who saw, heard, and followed Jesus. William F. Albright (1891–1971), an archaeologist associated with Johns Hopkins University and director of the American School of Oriental Research in Jerusalem for many years, said there is no reason to believe Jesus’ biographies were written later than ad 70. These were not corrupted over the centuries. Manuscript evidence shows that the early Bible had the same information as the modern Bible (“Towards a More Conservative View,” 3).

If the Bible record is rejected, then there is no conversation to have about Jesus. Practically nothing is known about Him without the Bible. To claim to believe in Jesus while rejecting parts of the record about Him (such as His miracles or His claims to be divine) is laughable. If one does not accept the Bible, then he cannot possibly know what to believe about Jesus. If one accepts the Bible, then he cannot pick and choose what to accept from it.

The combination of Jesus’ morality and teachings makes a strong case. His impeccable character aligns with His audacious claims. He never had to apologize, confess sin, or ask forgiveness (even from God). He defeated Satan in an epic showdown in the wilderness (Matthew 4:1–11; Luke 4:1–13). Even His enemies proved no sin in Him. After He challenged them, “Which of you convicts Me of sin?” (John 8:46), they only called Him derogatory names and picked up stones to kill Him (8:48, 52, 59).

Jesus’ miracles. Jesus said, “Though you do not believe me, believe the works” (John 10:38). John explained, “These are written that you may believe that Jesus is the Christ” (20:31).

Jesus constantly demonstrated healing power and compassion. He cured the sick, healed the diseased, corrected the malformed, restored the maimed, and returned self-possession to the demon-controlled (Matthew 15:30; Mark 1:40–45; 5:15). He empowered the lame to walk, the deaf to hear, and the blind to see (Matthew 8–9). When a man born blind was healed, the authorities interrogated him in hopes of ensnaring Jesus. The man’s reply was classic: “One thing I know: that though I was blind, now I see” (John 9:25). It is hard to argue with that. He could not understand how they did not see that this healer was God’s Son. “It has been unheard of that anyone opened the eyes of one who was born blind,” he pointed out (9:32).

The resurrection. Given His miraculous power, Jesus could have avoided arrest and crucifixion. He chose not to because His purpose was to die for sin. Before His arrest He said, “I lay down My life that I may take it again. No one takes it from Me, but I lay it down of Myself” (John 10:17–18). During His arrest, Peter tried to defend Him, but Jesus said, “Put your sword in its place” (Matthew 26:52).

After flogging Him, soldiers nailed His hands and feet to a wooden cross. When six agonizing hours had passed, He died. Then a soldier thrust his sword into Jesus’ side to confirm that His life was gone. The body was removed, wrapped mummy-like with linens and spices, and placed into a tomb of solid rock. A large stone was rolled over the entrance.

Since His enemies knew that Jesus predicted He would arise in three days (Matthew 27:63–64), they stationed soldiers nearby and affixed an official seal to the tomb. Nonetheless, three days later the rock was moved, the body was gone, and only grave clothes remained.

Jesus appeared alive for forty days to more than five hundred persons, including several times to His apostles (1 Corinthians 15:1–8).

What Should We Make of Jesus’ Audacious Claims?

What is the difference between the two scenarios of Jesus visiting a village and a visitor today claiming to be the Messiah? That generation was looking for the Messiah predicted at that time to come in the Old Testament (Daniel 9:25–27; cf. John 1:41–42; 4:25, 29, 42). If there is sufficient evidence for a reasonable person to conclude that Peter was right in declaring Jesus as God’s Son (Matthew 16:15–17), then intelligent people in every generation should believe it.

Is there sufficient evidence? Many have claimed to be God, and the world’s Messiah. Most of them were debunked in five minutes. With Jesus, it is not so simple. He had the credentials. His works were undeniable (John 11:47). He was no crackpot to be dismissed on appearance. He suffered no immediately obvious mental illness. “He taught as one having authority” (Matthew 7:29). He bested His opponents in argument (Matthew 22:41–46).

Jesus’ audacity forces one to believe that He was either a very evil man or the holy Son of God. His statements are only blasphemous if He is not God. They are objectionable only if He could not fulfill them. Jesus’ claims are either blasphemy or truth. They cannot be something in between.

If they are untrue, then the astonishing megalomania He possessed is unsurpassed in history. If He is not divine, then He deserves no respect, for He was a hypocrite of the highest order; He misled and jeopardized sincere souls. He belongs to the class of wannabes and charlatans.

The final choice is one of four—Jesus was either a deceiver, insane, legendary, or divine. We cannot put Jesus on a shelf as only a great teacher, dismiss Him as a psychotic, or paint Him as a legend. That leaves one alternative: He is the Son of God (John 20:31).

We must investigate His claims straight from Scripture (Acts 17:11; cf. Philippians 2:12). What we decide about Jesus is not an idle intellectual exercise. The stakes are high (John 8:24). Denying Jesus’ deity forfeits a relationship with the Father (John 5:23; 1 John 2:23).

If Jesus’ teachings are correct, then there is life beyond this life. It can be pleasurable or painful (Luke 16:19–31); and there are no second chances (Hebrews 9:27). So, it is important to make the right choice now (2 Corinthians 6:2). An audacious Jesus invites you to an auspicious eternity.