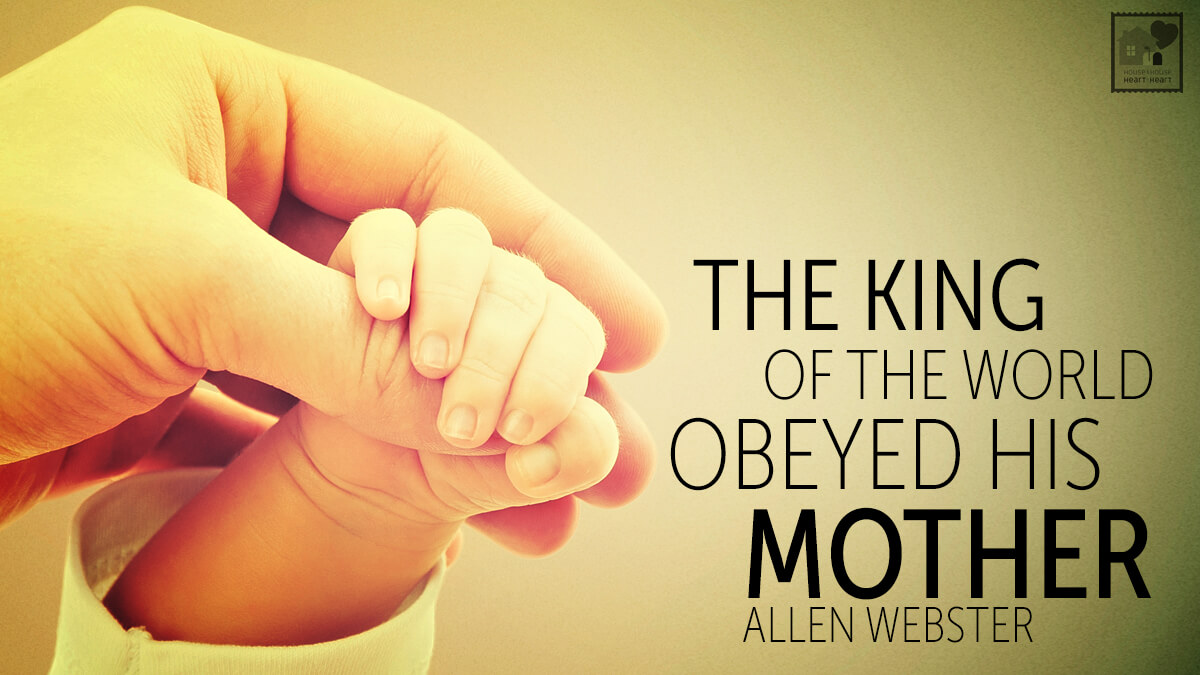 Home Editorial The King of the World Obeyed His Mother

If one were listing the moral commands in logical order, perhaps the “child’s command” would be last. Yet God chose to put it first. It leads the list of moral commands—even ahead of murder, adultery, and stealing. Why? If one learns to live properly at home, then he is unlikely to ever kill, break up a family, or steal.

“Honor thy father and thy mother” is thus one of the most important commands in the Bible. It is twice repeated in Moses’ Law (Deuteronomy 5:16; Leviticus 19:3). In the New Testament, it is preserved twice from Jesus’ teaching (Matthew 15:4; Mark 7:10) and once from Paul’s: “Children, obey your parents in the Lord: for this is right. Honor thy father and mother; which is the first commandment with promise” (Ephesians 6:1–2).

Jesus perfectly kept all God’s Commands, including the fifth commandment. As a youth, He was subject to His parents (Luke 2:51). He did what they told Him to do and did not do what they forbade Him to do. He handled His part of family responsibilities. Though His parents were poor and average, and though His father was only a foster father, Jesus bowed to their will. Though He had a strong spirit, and was full of wisdom, and was the Son of God, the King of the world obeyed His mother.

Jesus left teens and children an example to follow in His steps (1 Peter 2:21–22). Why should each obey their parents?

Jesus always did the right thing (John 8:29; Hebrews 5:8). The right thing for teens to do is to obey their parents. When one is asked to do work around the house, he should not complain, make only a poor attempt, or promise to do it later (Matthew 23:3).

Since God said obeying parents is right, and He is the One who determines morality, then it is right (Psalm 33:4). The only time it is wrong to obey parents is if they ask something that is contrary to God’s word. Then we must obey God rather than men (Acts 5:29). God looks at disobedience to parents as a terrible sin (Romans 1:30–32; 2 Timothy 3:2). The teenager who tells his parents that he will not do something they have told him to do is showing dishonor to God (Colossians 3:20). In the Old Testament, the death penalty was the punishment for the following sins:

Moses promised that Israelites who obeyed God would remain in the Promised Land for a long time. Under the Holy Spirit’s direction, Paul generalized that promise to apply to an extended lifespan on earth.1

Thousands of graves over the centuries testify that children’s lives are often cut short when they disobey their parents. How much longer would the Prodigal Son have survived in the far country? (Luke 15:11–17). An obedient teen usually has good morals, healthy habits, self-control, and industriousness. Such things tend to a longer and more prosperous life. No good parent ever tells a son or daughter to engage in risky behavior such as smoking, drinking, using drugs, driving fast, getting into fights, committing crimes, or being sexually active.

The man and woman responsible for bringing us into the world, feeding us, taking us to school and ball practice, getting our cavities filled, nursing us when we were sick, and doing the million other things that go with being parents deserve honor. Not one of us will ever know the many sacrifices our parents made to give us a head start on a successful career, family, and life. They were the one pair of people in the world that always believed in us, loved us even when we failed at something, and never kicked us when we were down.

It benefits the teen

Mark Twain mused, “When I was fourteen I thought my father was the dumbest man in the world, but by the time I reached twenty-one it was surprising how much he had learned in seven short years.”2 Even if we end up being more highly educated than our parents, the base of our knowledge came from them. There are some things that cannot be learned in a book—they come only by experience. Parents pass the practical wisdom of a lifetime down one sentence at a time. Solomon said that parental commandments and reproofs are light and the way of life (Proverbs 6:23).

A military man is distinguished by his decorations; a child is decorated by his obediences (Proverbs 1:8–9). To God, this type of ornamentation is worth more than a Distinguished Service Cross or a Congressional Medal of Honor.

1 This is a general rule and has exceptions. Just because Stephen did not live a long live does not necessarily indicate that he was disobedient to parents while young (Acts 7).

2 This quote is sometimes doubted or thought to be extended from Twain’s quote: “The older I got the smarter he got.” A similar quote comes from Going My Way written by Frank Butler and Frank Cavett: “When I was 18, I thought my father was pretty dumb. After a while when I got to be 21, I was amazed to find out how much he’d learned in three years.”