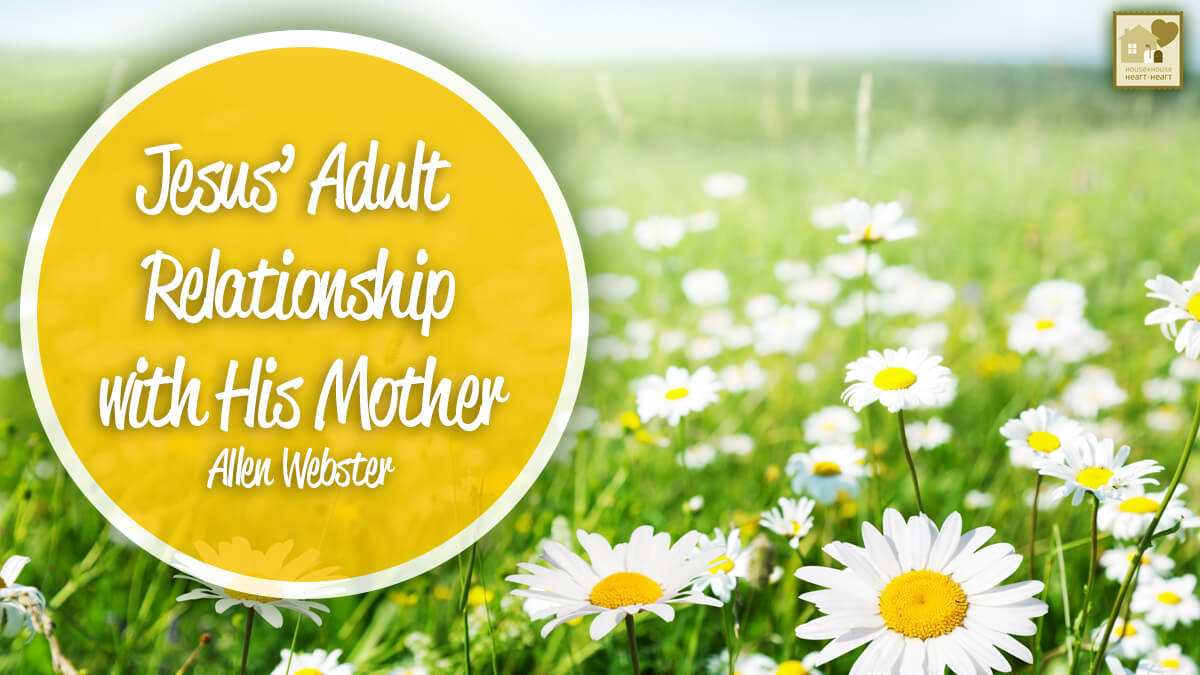 There are other kinds of parent abuse, which are not as obvious. Wayward children who leave the church as prodigals put parents in premature graves.

In all things Jesus is the perfect example. He had a good relationship with His parents. Jesus’ parents spent more time with Him on earth than anyone else. From what we can tell, He lived with them for the better part of two decades, and some think He may have lived with them until He began His ministry around thirty (Luke 3:23).

Honor means “reverence, respect, high esteem, to acknowledge the value of.” This commandment has different applications at different stages of life—pre-teen; teen; young adult; and middle age. Honoring parents requires something different at each stage.

Since Joseph is not mentioned after the trip to Jerusalem (Luke 2), most scholars believe that he died sometime during Jesus’ teen years. Therefore, we know more about Jesus’ interaction with His mother.

Mary knew Jesus better than anyone—perhaps better than anyone else ever would. Before Christ was born, Gabriel informed her that He would be no ordinary person. Since that miraculous birth, Mary had pondered the future glory of her Son. She had seen the visions, heard the angels, and witnessed His remarkable development. “Mary kept all these things, and pondered them in her heart” (Luke 2:19, 51; cf. Genesis 37:11). On this occasion, Jesus and Mary attended the same wedding in Cana of Galilee.

Parent abuse can take place when children enter young adulthood. Children mean everything to most parents. It could be said of most fathers “seeing that his life is bound up in the lad’s life” (Genesis 44:30; cf. Mark 9:14-27). Physical abuse is not common, but emotional abuse is. An eighty-year-old widow, in a small town where her married son also lived, was asked how much she enjoyed having a son so close by. She replied, “He has not come to see me in ten years.” It is hard to believe that humans can be so thoughtless.

During these years most people get married, move away, and have their children. They get busy with their own lives and neglect their relationship with their parents. How true it is that: “When children are little they walk upon your feet; when older they are upon your heart.”

The key to honoring parents as adults is time. In an age where communicating with a friend or family member on the other side of the country takes no more than a few clicks of a mouse, or a few taps on a cell phone screen, research indicates that we are as a society lonelier than we have ever been. Perhaps no other age group feels the keen sting of loneliness more than the elderly.

Parents deserve our love during the busy years. Upon reflection, we should have natural affection for those who have cared for our every need since birth (cf. Romans 1:31; 2 Timothy 3:3). Joseph is a good example of the type of love adult children should have for parents. After he was sold into slavery and had been separated from his father for 22 years, he was hungry for news about him and wept with excitement in hearing that he was alive (Genesis 43:27-28).

Thoughtfulness early avoids regrets later. Hardly an adult, who looks back, would not think of ways he could have honored his parents more. Some say, “How much more time I would spend with my parents if only I had them back.” If our parents are still alive, we can give them their flowers while they live. Resolve this week to spend some time with your parents if this is possible. Send a card. Make a call. Talk extra time, you will treasure the memory later when you cannot call them again.

G. Campbell Morgan observed, “A boy will never be a man if he always must obey his parents.” How long are children obligated to obey parents? Until they are 18 or 21? The usual rule is that as long as one is a part of the household, then he goes by the house rules. Once he moves out and becomes self-supporting, he makes his own decisions. Certainly, by the time one marries and starts his own home, he must be self-governing. This does not mean that he should not listen to advice from his parents, but it does mean that he is not obligated to always do what they suggest.

We are blessed to live in a time when we can keep our parents around longer than at any previous time in history. In the days the New Testament was written one who lived to be fifty was an exception.[1]

With this blessing comes responsibility. We must care for parents during the later years (1 Timothy 5:4, 8, 16).

At all ages children are to respect parents, but Solomon particularly urged that one’s mother be honored “when she is old” (Proverbs 23:22). Three Bible characters exemplify this trait:

One can be cast off, even if supplied with food to eat, a bed to sleep in, and a newspaper to read. Seniors need physical care, but they also need love and companionship. These can be lonely years, especially after one’s mate passes. Over time, many friends die or become incapacitated. Children and grandchildren must step into the gap with time, conversation, and entertainment.

Some do not want to be bothered with this responsibility. A former Colorado governor said, “The principle duty of old people is to die and get out of the way of the younger generation.”[4] God commanded that the aged be honored (Leviticus 19:32), especially parents (Ephesians 6:2). Western culture today idolizes youth and looks on age with disdain. Eastern culture, China, for instance, honors the grey head (cf. Proverbs 16:31).

If one puts parents in a nursing home, is he being heartless? There is no simple answer. The Pharisees were heartless toward their parents. The developed a loophole—Corban (“given”)—to violate the Fifth Command (Mark 7:11). After giving a lump sum to the temple, they told destitute relatives that they did not have any money to help them. Later they got a portion of this back.

We must let the Golden Rule decide. If one thinks his parent is better cared for in a nursing home, others should not condemn him. From the cross, Jesus made provisions for another to care for His mother. If one thinks a parent is better off in his own home, he will inconvenience himself and make room in his home for the parent, and be thankful for the privilege to serve. Some aged relatives are good houseguests (and all should try to be). Naomi, whose name means “pleasantness” (Ruth 1:20) must have been a joy to be around. Peter’s mother-in-law helped her family (Matthew 8:14–15).

Breakdown of families—including grandparents/grandchildren—causes many to feel abandoned. Loneliness is pervasive:

Loneliness can be self-defeating. Older adults who feel lonely tend to push others away and to lack the energy to engage others. How can we help our parents as they age?

The Fifth Commandment encompasses a great deal. In every stage of life, children should honor their parents.