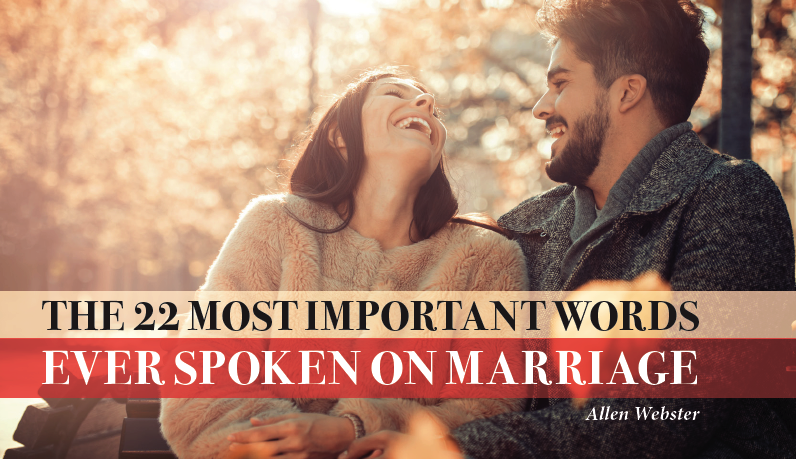 Home Editorial The 22 Most Important Words Ever Spoken on Marriage

There are 171,476 words in the English language, including romance, wedding, bliss, and nuptials. The Bible has 773,746 words in it (KJV), including love, husbands, wives, and joy.

Words are important (Proverbs 18:21; Matthew 12:36–37). Marriage is important (Hebrews 13:4; 1 Timothy 5:14). So words about marriage must be especially important. Which are the most important? The twenty-two spoken at the first wedding: “Therefore shall a man leave his father and his mother, and shall cleave unto his wife: and they shall be one flesh” (Genesis 2:24).

This is the beginning of an institution that endures to this day—perhaps one you have participated in, or one day will. The one thing God pronounced “not good” during creation was a single man (2:18).  After naming thousands of pairs of animals—from Mr./Mrs. Aardvark to Mr./Mrs. Zebra—it dawned on Adam that he was the only lonely creature. “But for Adam there was not found an help meet for him” (2:20).

Then God performed the first surgery on an anesthetized Adam. Removing a rib, God sculpted Eve into a beautiful bride. Adam did not wake up and find Eve lying in a hospital bed beside him. Picture Adam instead waking and wondering about the new scar in his side. Counting his ribs, he hears God say, “Adam, you forgot to name one creature.” He looked up to see the Father bringing his bride down the aisle (2:22).

The sight of his wife prompted the first recorded words of the first man: “She shall be called woman, because she was taken out of man” (2:23).

When children become adults, they cease a dependent relationship with parents with the intention never to resume it. Leave is a strong verb meaning “to forsake and neglect; leave destitute, refuse.”

When couples marry, they must leave parents in three ways:

To support a family, one must hold down a job. To keep a job, one must keep the boss happy by considering these suggestions: Don’t be lazy (Proverbs 6:6–8). Don’t be late. Do a little more than required. Don’t hang around the critical crowd. Be dependable. Since everyone cannot be promoted, aim to be the one who is. To some degree, the happiness of the breadwinner’s family depends upon his successful career.

Since debt is a leading cause of divorce, avoid it (Proverbs 21:20). No matter how much money one makes, he can always spend more. Spending less than one makes requires self-discipline. Once children come, it is a blessing to be able to live on one income and have more personal time with children instead of having to work two jobs to pay the bills (Titus 2:5).

Cleave to Each Other: Marriage is a Primary Relationship

God created a wife for Adam—not a father, mother, or child—establishing marriage as the primary relationship, not the parent-child relationship.

Marriage is more important than career.

Marriage is more important than career. Douglas MacArthur II (the famous general’s nephew) worked for the U.S. government. The Secretary of State once called his home and asked to speak with him. His wife did not recognize the Secretary’s voice and replied tersely, “He’s not here. He’s where he always is—weekends, nights, Saturdays, Sundays—at the office. You can reach him there.” He politely hung up and immediately called MacArthur, saying, “Go home. Your home front is crumbling.”

Many home fronts crumble for the simple reason that couples do not spend enough time together to keep the fire burning. Husbands and wives who live separate lives miss the point of marriage (Proverbs 5:15–19). Some men spend more time with golf or hunting buddies than with their wives; some wives will not leave work friends long enough to build a relationship with their husbands.

It can happen unintentionally. A couple becomes so involved in outside activities that they are more roommates than mates. They give so much attention to children that nothing is left for each other. If a marriage is built around children, or careers, disappointment awaits when the nest empties or retirement comes. Children are home a few years, but partners are there for life. It is unhealthy for children, too. Modeling spousal love is the best way to prepare them for their future marriages.

Moses showed how to get marriage off on the right foot: “When a man hath taken a new wife, he shall not go out to war, neither shall he be charged with any business: but he shall be free at home one year, and shall cheer up his wife” (Deuteronomy 24:5).  The new husband was not to be charged with any overnight business or be drafted into military service because that would require him to be away from home. His assignment was to cheer his wife. She was in a new environment with new responsibilities, perhaps feeling overwhelmed.

The last five of the twenty-two words contemplate weaving: “They shall be one flesh.” Marriage is a beautiful union of two lives. The more things a couple does together—live, play, work, plan, talk, worship—the greater likelihood the marriage will be satisfying.

Don’t overlook the obvious: “One flesh” points to God’s wedding gift of sex for the married couple. It is the fun element of marriage (Proverbs 5:15–19), an important ingredient in a lifelong relationship (Hebrews 13:4). God’s restrictions regarding sex before marriage are not to keep us from sexual joy but to save it for the right time and right person.

The more things a couple does together—live, play, work, plan, talk, worship—the greater likelihood the marriage will be satisfying.

God designed sex to have deep meaning. In this act, a husband and wife become one being for a moment in time. More than physically uniting bodies, it creates an emotional, chemical bond between them. To become one flesh with multiple partners (1 Corinthians 6:15–20) damages one’s ability to bond with a life partner.

Two pieces of duct tape stuck together have a strong bond. They will probably tear if separated. However, if first stuck to other things—the couch, the floor, clothing—the two pieces will hardly bond at all. They will be easy to separate. When people are immoral before marriage, they hinder their ability to bond strongly and stay together long term.

Sex is not only a marriage privilege, it is a marriage requirement (1 Corinthians 7:1–9). A husband owes his wife romantic affection. A wife owes him this pleasure. When spouses argue or go through a rough stretch, they must not refrain from sex—unless both agree for a limited time. If spouses do not satisfy each other, they leave one another open to temptation to commit adultery.

Children are the natural product of marriage (Genesis 1:28). If everyone adhered to God’s original plan, all babies would be born into families with a father and a mother and mature in a stable, financially secure environment.

A key component missing in many marriages is spirituality. When spouses share the common ground of worship, they have a strong foundation (Psalm 127:1; John 4:24).

Aquila and Priscilla exemplify a “together” relationship. They traveled, worked, and were hospitable together (Acts 18:2). They took a missionary trip together (Acts 18:18). They worshipped and taught the Bible to others together (Acts 18:26). They assisted Paul and risked their lives together (Romans 16:3–4). They encouraged other Christians together (1 Corinthians 16:19). They remained faithful throughout a lifetime together (2 Timothy 4:19).

As an exclusive, primary, and intimate relationship, marriage is a picture of the spiritual relationship between Christ and  His bride. In marriage, God achieves with two people what He wants all to experience in the church.

A husband and wife are one flesh; we are one with the Lord (1 Corinthians 6:17). Christ loves the church; a husband loves his wife (Ephesians 5:25). The church is subject to Christ; a wife is to her husband (Ephesians 5:24). The marital union results in children; the union of the Lord and His church results in converts (Romans 7:4).

As the Bible begins with a marriage, and ends with a wedding supper (Revelation 19:6–9), perhaps your life will go from an enjoyable marriage here to a seat at that great wedding supper at the end. And if marriage has not worked for you here, then everything can be perfect at your next one.