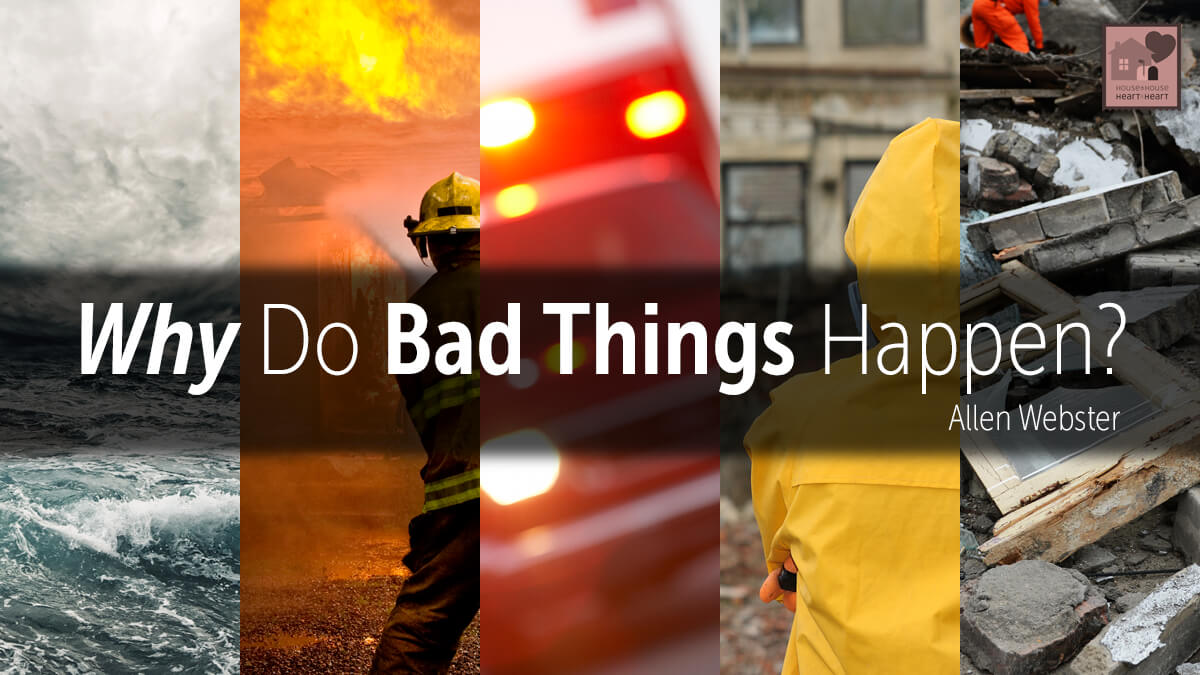 There are five primary causes of suffering:

1. We are mortal and live in a disease and death environment.

Nature does not discriminate between good and bad, atheist and believer. The sun and rain—including droughts and storms—fall on the just and the unjust (Matthew 5:45).

The Christian worldview does not require a spiritual explanation for every life experience. Suffering can be without any moral cause. Jesus raised the question of “those eighteen” upon whom a tower fell: “Think ye that they were sinners above all men that dwelt in Jerusalem? I tell you, Nay” (Luke 13:4–5). They were not being punished. It was an unfortunate accident.

Three historical events help explain the existence of suffering in the world:

The Creation (Genesis 1). God set up His world with natural laws regulating such things as gravity, matter in motion, weather patterns, the water cycle, ocean tides, and geological/meteorological conditions.

Those laws were implemented for man’s good, but if violated, they bring consequences. One can cook with fire or be consumed in it. Gravity keeps us attached to the planet, but it also crashes us to the ground if a plane engine fails. Two objects cannot occupy the same space at the same time, so one hit by a car will be injured or killed.

The Fall (Genesis 3). Why didn’t God create a world free from natural disasters? He did. On the sixth day everything God made was pronounced “very good” (Genesis 1:31). The Garden of Eden was an incomparable paradise of physical beauty and tranquil peace. It had no sickness, disease, pathogens, genetic flaws, harmful mutations, viruses, or other threats to man’s mental peace or physical well-being.

Man was designed to live forever in Eden, but he sinned (Genesis 3:6), and everything changed. God warned that the forbidden fruit would cause them to “surely die” (Gen-esis 2:17). Thus sin introduced death—spiritual and physical. Post-sin Adam was subject to the sweat of toil and the pain of thorns “till thou return unto the ground” (Genesis 3:17–19). With no access to the tree of life (Genesis 2:9; 3:22–24), those perfect bodies that God had whipped up from divine breath and earth dust began to decay.  Since all men sin, mortality is universal: “So death passed upon all men” (Romans 5:12). Man had an expiration date. “Death” entered our vocabulary.

Death is a point in time (James 2:26), but also a process. All die eventually (Hebrews 9:27); all are dying now (Ecclesiastes 12:2–7). A part of that “death that passed upon all men” is the constant threat of death. Random conditions exist that can destroy at any moment. None are guaranteed a full lifetime (Psalm 90:10; Luke 12:20). Since life can end at any time, we must always have our houses in order—regarding both the world we will leave behind and that to which we go (2 Kings 20:1; Luke 12:16–21).

The Flood (Genesis 6–8). Peter contrasted today’s world with “the world that then was” (2 Peter 3:6). Many believe the flood  changed the planet’s topography, geology, and meteorology (cf. Psalm 104:6–10). Some scientists postulate that natural disasters—heavy rains, dangerous winds, earthquakes, volcanic blasts—did not exist pre-flood.

2. We are foolish and make bad decisions.

The most dangerous gift that God gave man was volition—the ability to choose. God did not create evil, but He did create the possibility of evil. Adam and Eve were told what they could and could not do (Genesis 2:17). They introduced suffering into the world by choosing to disobey God. They soon learned of punishments involving sweat, subservience, pain, and toil (Genesis 3:17–19). They were driven from the paradise (3:24).

Every human is born with the ability to choose

Every human is born with the ability to choose (Joshua 24:15). We suffer if we use the gift foolishly. A frugal person has a surplus; a spendthrift can’t pay the bills. Hate leads to violence, and violence to pain. Greed leads to stealing and abuse. A violent temper leads to fights, injury, property damage, murder, and arrest. Drunkenness causes hangovers, wrecks, cirrhosis, poverty, and spouse abuse (Proverbs 23:29–35). A busybody who sticks his nose where it should not be will soon have few friends (I Peter 4:15). Sexual promiscuity leads to unwanted children, disease, abortion, and divorce (Hebrews 13:4).

3. We are connected and injured by other’s decisions.

Much of the pain in this world is collateral.

Much of the pain in this world is collateral. Jonah’s rebellion caused a ship’s crew to be caught in a fearful storm (Jonah 1:14). David had Uriah killed, but others died with him (2 Samuel 11:17). Herod left a whole village to grieve (Matthew 2:16–18). Innocents have always suffered because others choose greed, lust, hate, addiction, and selfishness. Radical adherents to a violent religion killed 2,998 in the Twin Towers and left a nation hurting. Families go without food because a parent is addicted to gambling, drugs, sex, or alcohol. Good spouses are divorced and left to rear children alone because the other found someone else (cf. Matthew 19:9). People are killed on highways every day by drinking drivers.

4. We are vulnerable and suffer from man’s inhumanity to man.

The might-makes-right crowd takes advantage of society’s powerless. Robbers steal. Murderers kill. Identity thieves prey upon citizens, ruining credit and causing chaos. The unscrupulous lie to the old and steal their retirement savings. A ruffian finds a woman in the wrong place and forces her—or lures her on a date, then drugs and rapes her. Terrorists plot, plant, murder, and maim. Criminal cowards shoot innocent children in schools and target moviegoers catching a Batman flick. Greedy businessmen take advantage of the unsuspecting and leave them high and dry.

Why doesn’t God step in? He allows the freedom to choose evil. When trouble brewed in the first family (Genesis 4:5–8), God did not step in and stop the fatal blow. He did not supernaturally heal Abel’s wound and bring him back to life. He allowed Cain the freedom to choose love or hate, and everybody had to live with the consequences. God will eventually right the scales of justice at the final tribunal (Matthew 25:31–33; Hebrews 10:31).

5. We are righteous, and darkness hates light.

“Yea, and all that will live godly in Christ Jesus shall suffer persecution” (2 Timothy 3:12). Jesus was executed on a cross even though He lived a sinless life (Matthew 27:35). He explained that His followers will also have tribulation in this world (John 16:33).

When God’s children suffer, we can trust that God will always do what is right (Genesis 18:25) and that He will always work things out for the best (Romans 8:28). Corrie Ten Boom, Holocaust survivor, wrote, “When a train goes through a tunnel and it gets dark, you don’t throw away the ticket and jump off. You sit still and trust the engineer.”

“Trust in the LORD with all your heart and lean not on your own understanding” (Proverbs 3:5).