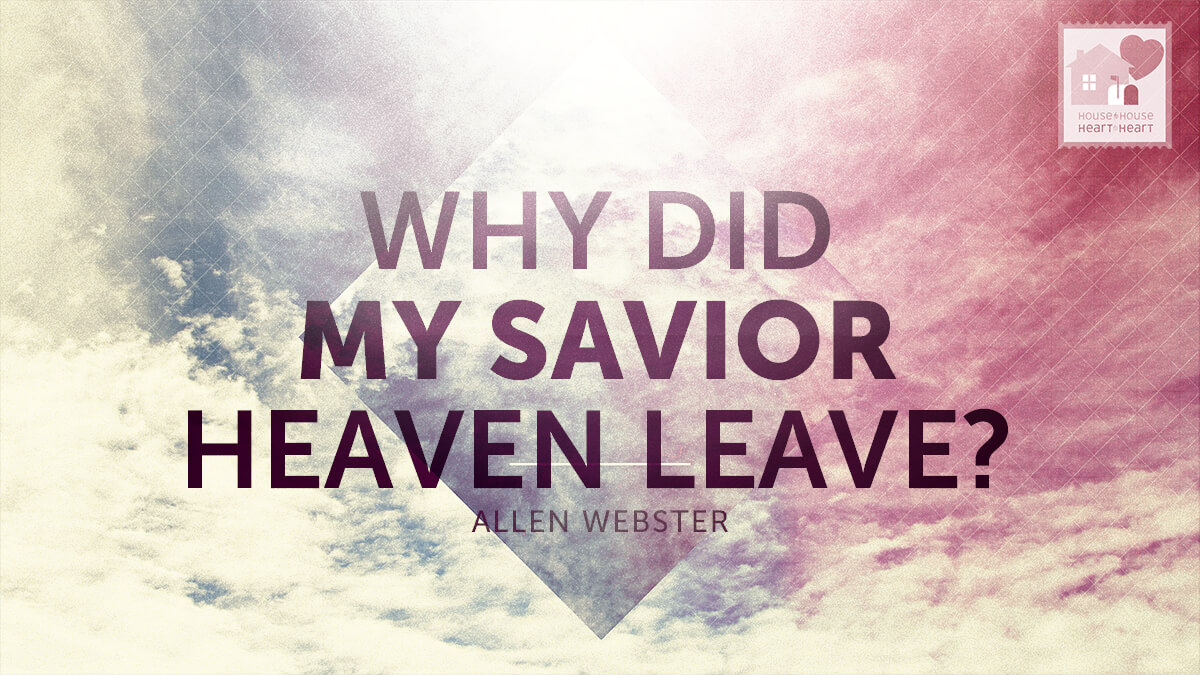 Home Editorial Why Did My Savior Heaven Leave?

It was not a visitation; it was an incarnation. He who made the world came to live in the world (John 1:10). He who made man from dust became a man. He who watched as the first baby was born became a baby. This Word of God one day “was made flesh, and dwelt among us” for a while (John 1:14).

The paradox is amazing. The divine Creator assumed human frailty. The eternal one entered time. The Word became a wordless infant. The all-powerful made Himself vulnerable. The all-holy exposed Himself to temptation. And in the end the immortal died.

The question is not who or how, but “why?” Why did Jesus have to leave heaven, come to earth, and become a man? Why couldn’t He save us from a distance?

Jesus had to live to die.

According to divine reasoning, the death of God’s perfect Lamb was necessary for man to be saved (John 1:29). Salvation depended upon a sinless person dying for all others (Romans 3:23–26). It required blood (Hebrews 10:4).

The problem then became: God is eternal; He cannot die. Some have trouble believing in the resurrection—that Jesus came back to life after His death. It is more difficult to conceive that an omnipotent God died in the first place. “Life” could die? (cf. John 14:6).

The solution? Jesus “was made a little lower than the angels for the suffering of death, crowned with glory and honour; that he by the grace of God should taste death for every man” (Hebrews 2:9). “Forasmuch then as the children are partakers of flesh and blood, he also himself likewise took part of the same; that through death he might destroy him that had the power of death, that is, the devil” (Hebrews 2:14).

Jesus had to be tempted to be perfect.

Perfection had to be tested. “For it became him, for whom are all things, and by whom are all things, in bringing many sons unto glory, to make the captain of their salvation perfect through sufferings” (Hebrews 2:10). Jesus, when tested, came through all His temptations without any sin: He “was in all points tempted like as we are, yet without sin” (Hebrews 4:15; cf. 7:26; John 8:46; 2 Corinthians 5:21; 1 Peter 2:22; 1 John 3:5; cf. Isaiah 53:9). He was then declared perfect: “And being made perfect, he became the author of eternal salvation unto all them that obey him” (Hebrews 5:9).

Jesus had to be hurt to understand.

How could one truly understand man’s condition who had not been a man? “Wherefore in all things it behoved him to be made like unto his brethren” (Hebrews 2:17). He had the full gamut of human problems:

Therefore He became “a merciful and faithful high priest . . . for in that he himself hath suffered . . . he is able to succour them that are tempted” (Hebrews 2:17–18). “We have not an high priest which cannot be touched with the feeling of our infirmities . . . Let us therefore come boldly unto the throne of grace, that we may obtain mercy, and find grace to help in time of need” (Hebrews 4:15–16).

Jesus had to be among us to show the way.

Thomas voiced humanity’s quandary: “How can we know the way?” (John 14:5). God sent His Son to show us the way—to be the way: “And the Word was made flesh, and dwelt among us, (and we beheld his glory, the glory as of the only begotten of the Father,) full of grace and truth” (John 1:14). Christ left “us an example, that ye should follow his steps” (1 Peter 2:21–23). Jesus was therefore able to answer Thomas’ question: “I am the way, the truth, and the life: no man cometh unto the Father, but by me. If ye had known me, ye should have known my Father also” (John 14:6). To have followers, one must be out front.

Jesus had to be one of us to represent us.

“For there is one God, and one mediator between God and men, the man Christ Jesus; who gave himself a ransom for all, to be testified in due time” (1 Timothy 2:5–6). There are two qualifications of a mediator: (1) He cannot be a part of the offense; and (2) He must equally represent both sides. Jesus is perfectly qualified to be our mediator because He never sinned; and by virtue of the incarnation He could equally represent God’s part (the offended party) and man’s part (the offending party). He was both the Son of God and the Son of Man. D. L. Moody once reasoned:

Some may ask why Christ did not come from heaven in glory and grandeur. I suppose He could have done so; He could have come from the throne in a golden chariot, and have gone through the world as an angel of light. But if a man wants to be a mediator he must be a friend of both parties, and how could Christ have been a mediator between us and God if He had not taken upon Himself our nature? Some say it was a mystery that God ever permitted sin to come into the world, but it was a greater mystery that God ever sent His Son to bear the brunt of it.[popover title=”Source” title_bg_color=”” content=”D. L. Moody. 1100 Illustrations from the Writings of D. L. Moody, John W. Reed, Editor, p. 50.” content_bg_color=”” bordercolor=”” textcolor=”” trigger=”hover” placement=”” class=”” id=””]*[/popover]

Jesus had to become poor to make us rich.

Paul wrote, “For ye know the grace of our Lord Jesus Christ, that, though he was rich, yet for your sakes he became poor, that ye through his poverty might be rich” (2 Corinthians 8:9).

Why did my Savior heaven leave? As the old song profoundly says, “Because He loved me so.”