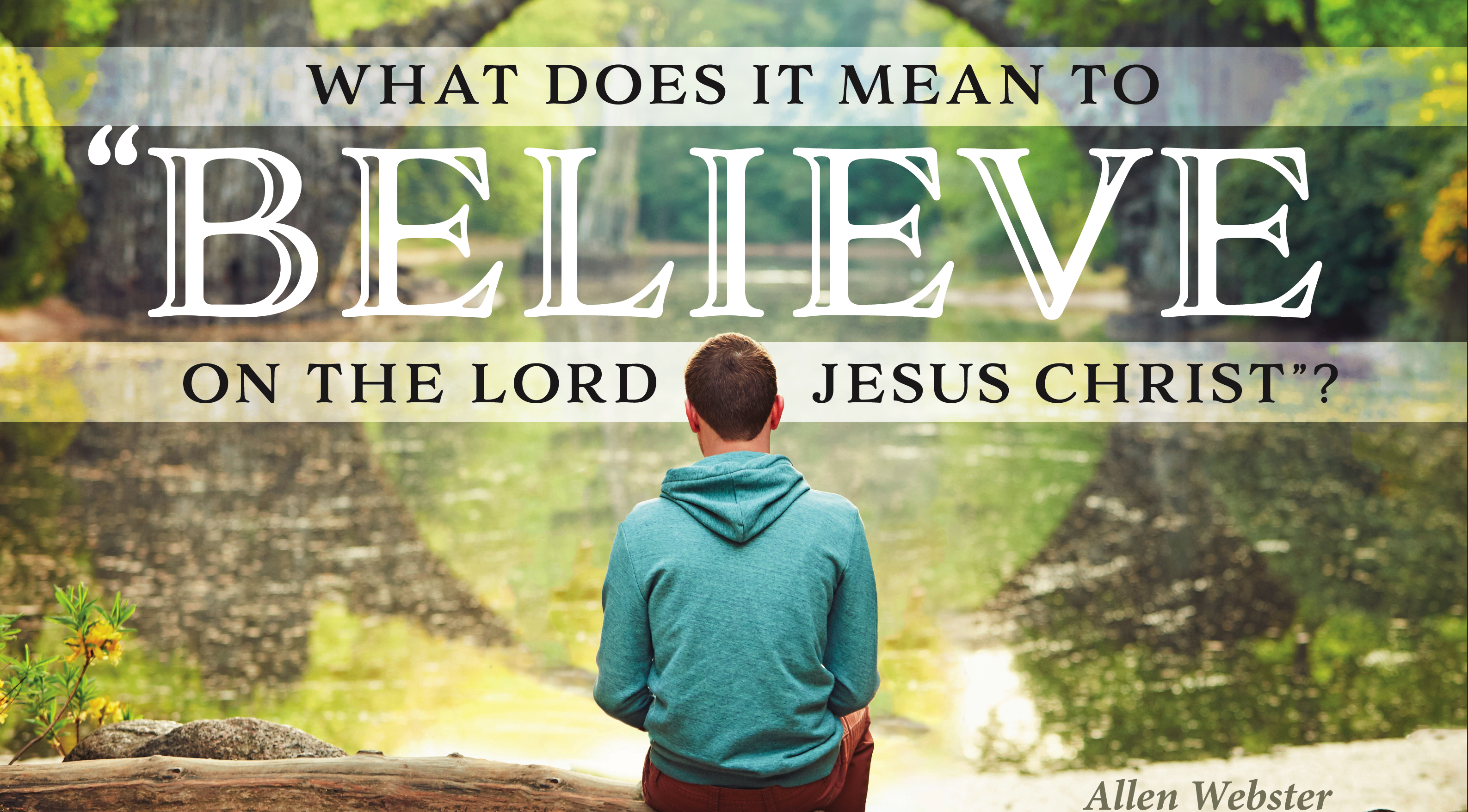 Home Editorial What Does it Mean to Believe on the Lord Jesus Christ?

Paul gave God’s greatest answer to man’s greatest question by relating Christ’s greatest news. “Believe on the Lord Jesus Christ, and you will be saved, you, and your household” (Acts 16:31).

This answer has two parts:

Controversy has surrounded Acts 16:31, but it should not. This passage is one of the great verses of the New Testament. It fits perfectly with all the gospel says of man’s response to God’s grace.

Acts 16:31 connects to the great commission.

Paul and Silas were sent out under Jesus’ command to “go into all the world and preach the gospel to every creature. He who believes and is baptized will be saved; but he who does not believe will be condemned” (Mark 16:15–16).

The book of Acts is simply the record of the apostles fulfilling this commission. Every conversion recorded in Acts conforms to Mark 16:15–16.

For instance, Philip preached Jesus to the Ethiopian treasurer (Acts 8:35).

“What must I do to be saved?” (or the equivalent) is asked three times in Acts.

It was asked by the Jews on Pentecost (Acts 2:37). Peter replied: “Repent, and let every one of you be baptized in the name of Jesus Christ for the remission of sins; and you shall receive the gift of the Holy Spirit” (Acts 2:38). The result: “Those who gladly received his word were baptized; and that day about three thousand souls were added to them” (Acts 2:41).

It was asked by Saul of Tarsus. When he saw the Lord in a vision, he asked, “What shall I do, Lord?” Christ directed him to go into Damascus where he would be told all things appointed for him to do (Acts 22:10). After three days of Saul’s penitent prayer, Jesus sent Ananias to him, saying, “Why are you waiting? Arise and be baptized, and wash away your sins” (Acts 22:16). The result: “He arose and was baptized” (Acts 9:18).

Note that, surprisingly, a different answer was given each time. Does God have no definite plan? Does He require different things of different people? No, God is no respecter of persons (Acts 10:34–35; Romans 2:11). Everyone is required to make the same trip; some are just farther down the road than others.

The traveler received three answers to the same question, yet each was correct because he was in a different place.

The same is true with salvation. To

Combined, the three answers were (a) Believe; (b) Repent; (c) Be baptized. Each questioner was in a different place:

Those on Pentecost had met requirement (a) and were told (b) and (c).

The jailer had fulfilled no requirement, so he was told to do (a); then (b) and (c) were explained to him. Believing (a) did not exempt him from (b) and (c).

A modern illustration might make it clearer. Suppose a high school student asked, “What must I do to get a PhD?”

Her friend might say, “You’ll have to go to college.” Her advisor would reply, “Complete high school, get your college undergraduate degree. Then enroll in graduate school and obtain a master’s. After that, apply for candidacy in a doctoral program.”

If a college graduate asked that question, he would not be told to finish high school and complete undergraduate work. He would be instructed to “enroll in graduate school, get a master’s, and apply to a doctoral program.”

If one with a master’s degree asked this, she would be told, “Apply to be a candidate in a doctoral program.” Each is at a different point.

Paul’s answer must be understood in its context. As an unbeliever, the jailer did not know who “the Lord Jesus Christ” was. He was like the blind man who said, “Who is He, Lord, that I may believe in Him?” (John 9:36).

Probably, up to that night the jailer had never even heard Jesus’ name. He had certainly never attended a church service or listened to a gospel sermon. He could not believe in Jesus until he learned about Him (Romans 10:17).

Paul responded with the general command to believe and then taught him who Jesus is and what He requires (Acts 16:31). “Believe on the Lord Jesus Christ” was the summary, shorthand answer—the introduction, not the conclusion.

Acts 16:31 is not God’s complete plan of salvation (no single verse is). For instance,

“Believe on Jesus” is condensed gospel followed by blessed commentary.

Acts 16:31 connects to other passages on faith.

“Believe on the Lord Jesus” is consistent with Jesus’ teaching that believing in the Son is the key to having eternal life (John 3:36; 8:24; 20:30–31). Paul doubtless told the jailer that whoever believes in Jesus should not perish but have everlasting life (John 3:16).

It is important to use the term “believe” as the Holy Spirit did. What does it mean to believe? In Scripture, faith has these characteristics:

Faith includes the intellect. Sinners must believe in Jesus. Believe what? That He is “the Lord Jesus Christ,” indicating His deity, humanity, and Messiahship.

Faith is only as good as its object.

Faith includes the emotions (conscience). We must believe on Jesus. Faith is not merely believing facts. It is trusting Christ to rescue from sin’s dominion (Romans 6:14; Hebrews 7:25) and relying upon Him to remove sin’s guilt (Romans 8:33).

Faith includes the will. Faith is consummated by an obedient response (Romans 16:26). It involves a decision. Believers receive the right to become sons of God (John 1:12).

A patient relies on a physician, the accused on an advocate, and a player on a coach. A patient that fails to take medicine the physician prescribed, the accused who disregards the counselor’s advice, and a player who runs a different play than his coach called—all show a lack of faith by disobedience.

The jailer’s faith led to actions. He

Acts 16:31 connects to other cases of conversion.

Some make this mistake by saying things like, the jailer “did not have to move his body an inch to be converted.” Acts 16:31 teaches salvation by faith, but it does not teach salvation by faith only. There is no “only” in the verse. James declared “faith only” does not save (James 2:17–20, 24).

There is consistency in the conversion cases in Acts. “Many of the Corinthians hearing, believed, and were baptized” (Acts 18:8) is a simple summary. Compare the other conversions in chapters 2, 8, 9, 10, 16, and 19.

The jailer is a good example of what to do upon learning the gospel. When Paul finished their study, the jailer obeyed the same hour of the night. He did not argue, make excuses, or procrastinate.

Have you believed on the Lord Jesus Christ? If you have not been baptized yet, or if you did so for the wrong reasons,  “why are you waiting? Arise and be baptized, and wash away your sins.”

We will be happy to help.