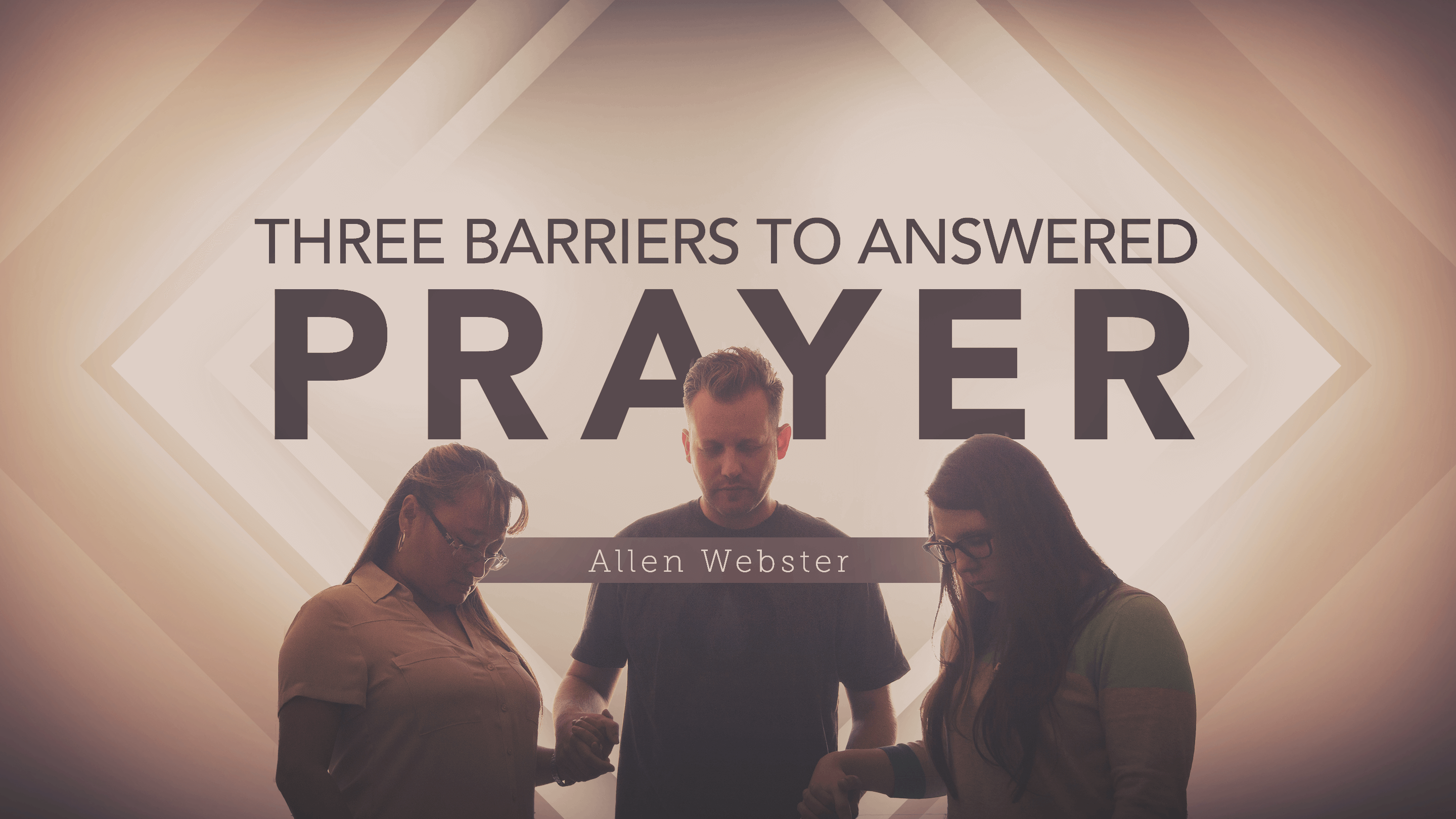 It is known within the Virginia State Highway Patrol that sometimes officers sneak away for a game of golf. One officer had forgotten which course his friend said to meet him. When he called his friend’s office, the receptionist said, “I’m sorry; Dan’s away from his desk.” Knowing she would not admit where Dan was, he asked, “Tell me, is he 10 miles away from his desk or 22 miles away?”

Sometimes we wonder why God seems far away. Is He paying attention? David asked, “My God, My God, why have You forsaken me? Why are You so far from helping Me?” (Psalm 22:1). Deep down, perhaps, David understood, “The Lord is near to all who call upon Him in truth” (Psalm 145:18) but at that moment He seemed distant.

First Timothy 2:8 gives three reasons God can be far away from answering a Christian’s prayers.

Several prayer postures are found in the Bible:

Tertullian said of the practice of early Christians: “We Christians, looking up to heaven with outspread hands, because they are free from stain; with uncovered heads, because there is nothing to make us blush; without a prompter, because we pray from our hearts . . .” (his apology).

Holy hands (or “clean”) was symbolic of a blameless life (2 Samuel 22:21; Psalm 24:4). “Draw near to God and He will draw near to you. Cleanse your hands, you sinners; and purify your hearts, you double-minded” (James 4:8). Pilate borrowed from this idea at Jesus’ trial when he took water, washed his hands before the multitude, and said, “I am innocent of the blood of this just Person. You see to it” (Matthew 27:24).

The stream of prayer rises no higher than the fountain of living. As preachers used to be told to preach by their lives, or not at all, so Christians ought to pray by their lives, or not at all. Praying cannot be divorced from conduct. Solomon said, “The sacrifice of the wicked is an abomination to the Lord, but the prayer of the upright is His delight” (Proverbs 15:8). “One who turns away his ear from hearing the law, even his prayer is an abomination” (Proverbs 28:9). David said, “If I regard iniquity in my heart, the Lord will not hear” (Psalm 66:18).

The disobedient return from prayer empty-handed. They come to God’s footstool in tears and leave in sobs. Men ask and receive not, because they ask amiss, and seek only to gratify selfish desires (James 4:1-4). God warned, essentially, “If you stop listening to me, I will stop listening to you” (Proverbs 1:24-28). “When you spread out your hands, I will hide My eyes from you; even though you make many prayers, I will not hear. Your hands are full of blood” (Isaiah 1:15; cf. 59:8; Jeremiah 11:14). Obedience is “better than sacrifice, and to heed than the fat of rams” (1 Samuel 15:22; cf. Deuteronomy 5:29).

Satan knows the power of one righteous person at prayer (James 5:17-18), so he does all he can to hinder prayer. A Dutch proverb goes, “Sinning will make a man leave off praying, or praying will make a man leave off sinning.” A crisis or danger may drive sinners to pray. If the crisis passes, they may forget God until the next time they need Him. If the crisis does not pass, they may blame God for not hearing or conclude that God does not exist. Bad living means bad praying and, in the end, no praying at all.

Walking with God proceeds talking with God. Enoch must have maintained unbroken communion with Jehovah, although the Bible does not give any of the patriarch’s prayers. Andrew Bonar suggested that God and Enoch were in the habit of walking and talking daily and then one day God said to His companion, “You have come so far each day of our long pilgrimage together, now come all the way home with Me.” Thus, “he was not, for God took him” (Genesis 5:24). Noah also “walked with God” (Genesis 6:9). In the earlier books of the Bible, God appears to speak more to man than man does to God. In Genesis 6-9, for instance, God does all the talking and Noah does the obeying.¹

Christian husbands are to treat wives as “heirs together of the grace of life,” that their prayers “may not be hindered” (1 Peter 3:7). The word translated “hindered” was used for a road being cut away so that it could not be traveled. If spouses mistreat each other, the path of prayer to God is cut. We must be right with others before we can be right with God (1 John 3:22-23).

Difficulty in prayer often comes from our not believing strongly in God. For prayer to avail, it must be “in faith, with no doubting, for he who doubts is like a wave of the sea driven and tossed by the wind . . . let not that man suppose that he will receive anything from the Lord” (James 1:5-7; cf. Mark 11:20-26; Hebrews 10:23). Stated positively, prayer requires faith and confidence. Jesus said, “Whatever things you ask in prayer, believing, you will receive” (Matthew 21:22). Some do not expect enough from prayer. Someone has said, “Pray, believe and receive. Pray, doubt and do without.” Jesus still asks, “Do you believe that I am able to do this?” (Matthew 9:28).

Abraham was a man of prayer (Genesis 12:1, 7-8; 13:4). Matthew Henry says, “Wherever he had a tent, God had an altar. Abraham did not leave his religion behind him, as many do, when he traveled.” Still, he got discouraged when the promised child did not come. God promised to give him seed (12:1-3). After twenty-five years passed God told him: “Do not be afraid, Abram. I am your shield, and your exceedingly great reward” (15:1). He renewed His promise of many descendants. Abraham believed God (15:6). The word for “believed” is “amened.” God’s delays were not denials.

We must not doubt God’s presence. The devotions of the heathen depend upon times, places, or pilgrimages. The Assyrians thought the God of Israel was the God of the hills, and not of the valleys (1 Kings 20:28). When Balaam was baffled in trying to curse Israel, he went to another place to see if his prayers would be more effective (Numbers 23:3). Among the Jews, who were for a time under a theocracy, God chose a place where He might reside, but they could pray to Him from anywhere. Where was Jacob when he said, “This is none other than the house of God, and this is the gate of heaven”? (Genesis 28:17).

God is no more a respecter of places than of persons (John 4:23).

Prayer is available everywhere, because the need for prayer is everywhere.

We must not doubt God’s power. The Bible assures us that we need not doubt. “Great is our Lord, and mighty in power” (Psalm 147:5). He is omnipotent (Genesis 18:14; Matthew 19:26). The power that created the universe is the power that responds to prayer (Genesis 1:1). He spoke a universe into existence (Psalm 33:6-9). His power is far beyond our comprehension (cf. Job 37:5). James Dobson wrote:

I am . . . awestruck by the unbelievable dimensions of God’s creation. How does one grasp the meaning of a visible universe that is at least 30 billion light years across and composed of perhaps 100 billion galaxies, each containing hundreds of billions of stars? It is breathtaking to consider what exists in the silent sky. One object relatively near us, a star named Epsilon, is larger than the orbit of the planet Pluto in our solar system. If it were hollow, it could contain more than 2.3 billion of our suns.³

God made man “in His own image” (Genesis 1:26-27). He is Spirit (John 4:24); He made us eternal spirits (cf. Hebrews 12:9) and fused us into our physical bodies (2 Corinthians 4:16, 18). When our spirit leaves our body, death transpires (James 2:26). By what metaphysical process is the spirit initially placed into the body? Why does the spirit not “seep” out of the body if we get cut? Who has the answer to such questions? God does.

We must not doubt God’s care. Christians are not only to “believe that He is,” but that “He is a rewarder of those who diligently seek Him” (Hebrews 11:6). The Bible teaches that we can entrust our future to God because He loves us and wants the best for us (Isaiah 40:31). He gives as much attention to the insignificant as to the great (Isaiah 40:29-30).

One little boy popped his head into his parent’s room one night and asked, “Hey mom and dad, do either of you need anything?” They looked at each other a little bewildered, and responded, “No, son, why?” He replied, “I was just checking because I was about to say my prayers.”(4) A child-like faith in the power of prayer leads to answered prayer.

If we pray with unholy hands, anger, or doubt, we might as well neglect prayer, for such prayers are ineffective. Let us approach God in prayer with faith and humility.

1 No reply from Noah is recorded unless it is the curse and the benediction of chapter 9:25-27.

2 The word can also mean “disputing.” “Do all things without complaining and disputing” (Philippians 2:14).

4 Dan Winkler, When I Kneel at the Throne of Grace.