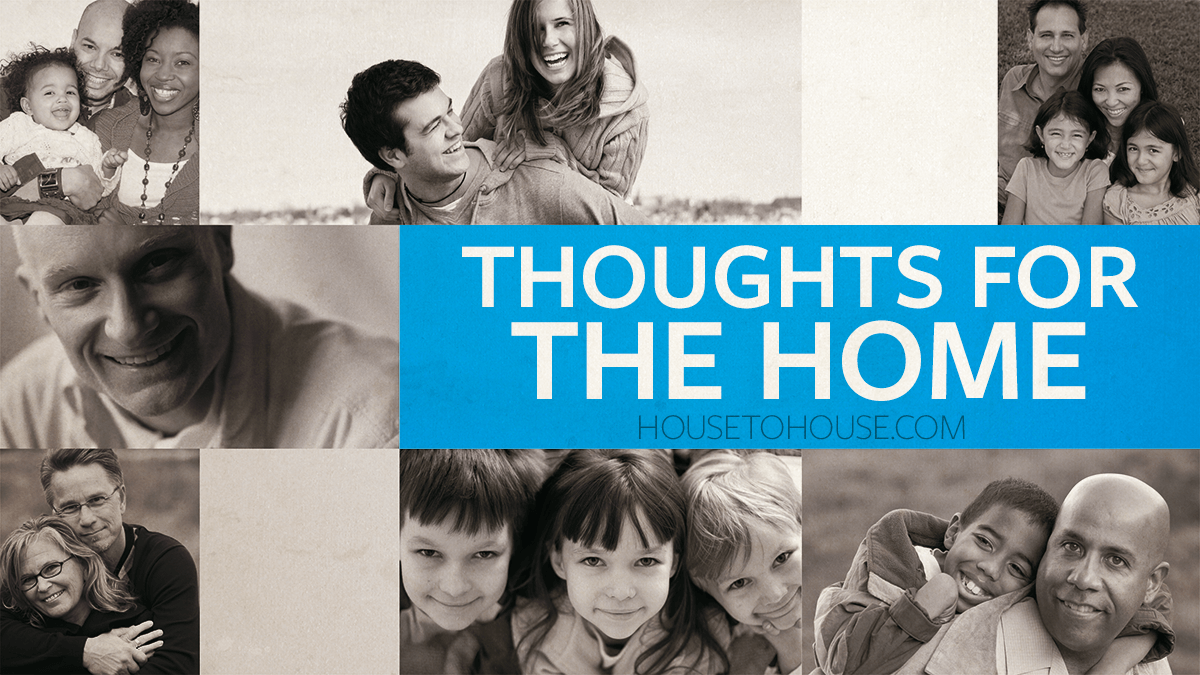 Home Family Thoughts for the Home

Tom Brokaw of NBC News once reported a story about a Mrs. Louise Horner from Maryland, who put an ad in the local paper. It read,

Husband for sale, Cheap! Comes equipped with hunting and fishing equipment, two shirts, boots, and black Labrador Retriever . . . but he’s not home much from October to November. (That’s hunting season.)

Mrs. Horner received sixty responses to her ad . . . and she was only joking!

Maybe it’s time for husbands to sit up and take notice of the amount of time they devote to recreations like hunting. While recreation is good and necessary, sometimes we husbands borrow time that really belongs to our wives and add it to our time in the woods.

Maybe it’s time to put the gun back in the truck and head on home.—Glenn Colley, Huntsville, Alabama

“Husbands, dwell with them according to knowledge, giving honour unto the wife.”  1 Peter 3:7

Love Is the Key

A recent study of maladjusted high schoolers shows how important it is to tell our children we love them.

After the counselors had worked long enough to gain rapport with ten of the most maladjusted students, they asked them how long it had been since their parents had told them they loved them. Not a single one could remember having heard such a comment.

By contrast, ten of the best adjusted teens answered the question by saying, “This morning” or “Last night” or by indicating that they had been verbally re­assured of their parents’ love within the last few hours. —Unknown

What if Jesus Came to Your House?

If Jesus came to your house to spend a day or two—
If He came unexpectedly, I wonder what you’d do.
Oh, I know you’d give your nicest room to such an honored Guest,
And all the food you’d serve to Him would be the very best.

But when you saw Him coming, would you meet Him at the door
With arms outstretched in welcome to your heavenly Visitor?
Or would you have to change your clothes before you let Him in,
Or hide some magazines and put the Bible where they’d been?

Would you turn off the radio and hope He hadn’t heard,
And wish you hadn’t uttered that last, loud, nasty word?
And I wonder if the Saviour spent a day or two with you,
Would you go right on doing the things you always do?

Would you keep right on saying the things you always say?
Would life for you continue as it does from day to day?
Would your family conversation keep up its usual pace,
And would you find it hard each meal to say a table grace?

Would you be glad to have Him stay forever on and on,
Or would you sigh with great relief when He at last was gone?
It might be interesting to know the things that you would do,
If Jesus came in person to spend some time with you. —Lois Blanchard Eades

How to Hurt Your Spouse

The preacher came up with a brilliant plan. “Before you leave him, build him up. Act like you really love him. Tell him how important he is to you and how much he means to you. Shower him with praises. Be as nice and considerate as you can. Make him believe that you truly love him. After you convince him that you love him and can’t live without him, then tell him you are getting a divorce. That will really sting.”

With revenge in her heart, she smiled and said, “Wonderful! That will show him.”

She threw herself into this with vigor. For two months she showed him love, kindness, and affection. She listened, gave of her time, and shared​ her heart. After a couple of months, the preacher called to check how things were going. “Are you ready to go through with the divorce?”

“Divorce?” she said. “Never! I found out that I really do love him.”

Her actions had changed her feelings. Love is established not just by promise and feeling but often by repeated actions.

“Thy wife shall be as a fruitful vine by the sides of thine house: thy children like olive plants round about thy table.” Psalm 128:3