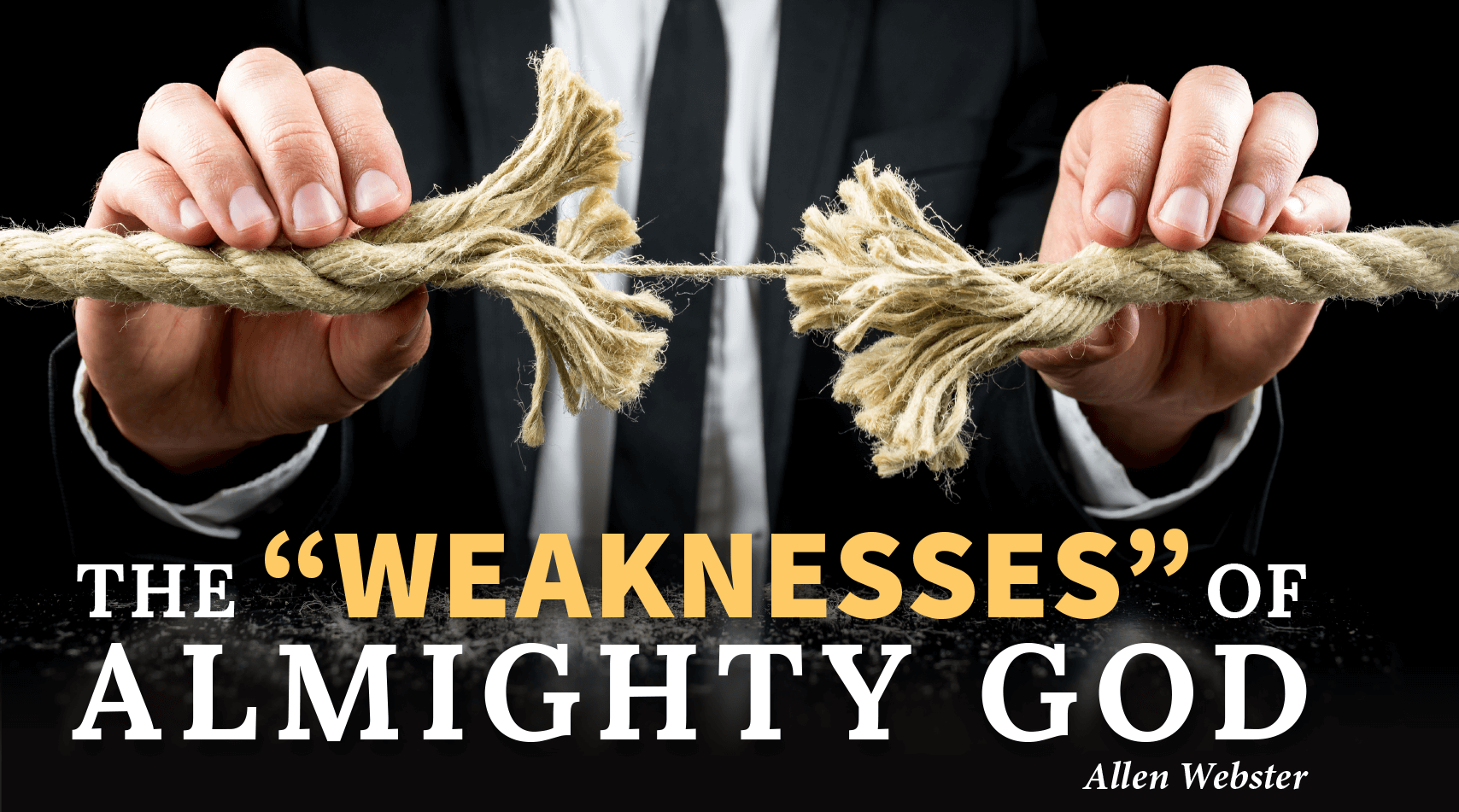 Home Editorial The “Weakness” of an Almighty God

Paul’s statement, then, is unusual: “Because the foolishness of God is wiser than men, and the weakness of God is stronger than men” (1 Corinthians 1:25). This, of course, emphasizes man’s weakness and God’s strength. The sense is, “If God had a weakness, it would still be stronger than man. God on His worst day is better than man on his best day.” But let’s run with this thought. What are God’s “weaknesses”?

THE ALMIGHTY GOD HAS A “WEAK” MEMORY.

God has trouble remembering certain things—He just cannot recall forgiven sins. This was the prayer of the ancients: “Do not remember the sins of my youth, nor my transgressions” (Psalm 25:7). Again, “Oh, do not remember former iniquities against us! Let Your tender mercies come speedily to meet us” (Psalm 79:8). Through both the statesman prophet and the weeping prophet, God promised “forgetfulness.” He told Isaiah, “I, even I, am He who blots out your transgressions for My own sake; and I will not remember your sins” (Isaiah 43:25). Jeremiah received this joyful message:  “I will forgive their iniquity, and their sin I will remember no more” (Jeremiah 31:34). God reiterated the promise in the New Covenant: “I will be merciful to their unrighteousness, and their sins and their lawless deeds I will remember no more” (Hebrews 8:12; 10:17). Forgiven sins are blotted out (Acts 3:19) and washed away (Acts 22:16). He forgot the wastefulness of the prodigal (Luke 15:20–­24) and the bloody hands of Christ’s crucifiers (Acts 2:23, 38, 41). He offers this same forgetfulness to us!

THE ALMIGHTY GOD HAS “WEAK” HEARING.

There are some prayers that God cannot hear way up in heaven. God does not hear a sinner’s prayer. The psalmist knew this: “If I regard iniquity in my heart, the Lord will not hear” (Psalm 66:18).1 The wisest man knew it, too: “One who turns away his ear from hearing the law, even his prayer is an abomination” (Proverbs 28:9). Peter said, “The eyes of the Lord are on the righteous, and His ears are open to their prayers; but the face of the Lord is against those who do evil” (1 Peter 3:12). This does not mean that God is unaware of their petitions; instead, He refuses to answer them. When the sinner looks to heaven, and says, “My Father,” he looks in the wrong direction (cf. John 8:44). Prayer is the privilege of God’s child.

Sin stops the flow of God’s blessings. Although an estimated 500,000 tons of water rush over Niagara Falls every minute, on March 29, 1948, the falls suddenly stopped. People living within the sound of the falls were awakened by the overwhelming silence. Some believed it was a sign that the world was coming to an end. It was thirty hours before the rush of water resumed. What happened? Heavy winds jammed the ice fields of Lake Erie into the entrance of the Niagara River near Buffalo and stopped the water’s flow.2 Sin does that to the Niagara of God’s blessings. On the other hand, James promises that “the effective, fervent prayer of a righteous man avails much” (James 5:16).

THE ALMIGHTY GOD HAS “WEAK” SMELLING.

In the Old Testament, Jehovah is sometimes pictured as “smelling” the sacrifices offered Him (cf. Genesis 8:21–22). In the New Testament, Christ’s sacrifice of Himself is said to be a sweet aroma to God (Ephesians 5:2) and Christians graciously serving others “smells” good to God (Philippians 4:18). When Israel offered God unacceptable sacrifices, He suddenly developed “smelling problems.”

He warned that if they walked contrary to His Will, “I will not smell the fragrance of your sweet aromas” (Leviticus 26:31). Many years later, it happened: “I despise your feast days, and I do not savor your sacred assemblies” (Amos 5:21). As a boy, Norman Vincent Peale found a cigar, slipped into an alley, and lit up. It tasted terrible, but it made him feel grown up—until he saw his father coming. He quickly put the cigar behind his back, and, trying to be casual, pointed his father’s attention to a billboard advertising a circus “Can we go, Dad? Please!” His father’s reply taught a lesson he never forgot. “Son, never make a petition while at the same time trying to hide a smoldering disobedience.”3 God cannot accept worship from hypocrites—He just cannot stand the smell.

THE ALMIGHTY GOD HAS “WEAK” EYESIGHT.

God has trouble seeing certain things. Isaiah said, “You have cast all my sins behind Your back” (Isaiah 38:17)—indicating that they were “out of sight, out of mind.” An unusual two-goat ceremony under the Old Law illustrates the invisible quality of forgiven sins. God told them to sacrifice one goat as symbol of sin’s penalty; the priest was to lay hands on the other’s head—the scapegoat—as a symbol that the people’s sins were being transferred to the animal. Then the goat was sent into the wilderness to show that their sins had been carried away (Leviticus 16:8­–10, 30­–32). This ceremony has messianic overtones. Jesus is now God’s Scapegoat to “take away the sin of the world” (John 1:29; cf. Isaiah 53:6–12). God laid on Him all our sins at Calvary. We can now be forgiven! How far does He carry them from us? As far as the east is from the west! (Psalm 103:8­–17).

Micah pictures forgiveness as God casting sins into the sea (Micah 7:19). Of all the places on earth to lose something—especially to an ancient mind—none is more irretrievable than those at the bottom of the deep ocean. When God sees a penitent child walking in the light, He sees His Son’s blood, not mistakes, for “if we walk in the light as He is in the light, we have fellowship with one another, and the blood of Jesus Christ His Son cleanses us from all sin” (1 John 1:7).

Jesus never met a man He would not save. Read the Gospel Records and see for yourself. You never find Him saying, “I wish I could help you, but there’s nothing I can do.” You never hear Him say, “Your case is too difficult for me.” He leaves no inkling of unwillingness or inability. He died for “the sins of the world”—all of them. He shed His blood for “the remission of sins”—all sins.4

God will forgive anybody for any sin! It matters not what sins have been committed. Some sinners hesitate to come to Christ because they fear God can never forgive them. Some Christians live in doubt of whether God has forgiven them. It is good to be sensitive to sin, but it is not good to doubt God. He said He would forgive—did He lie? (cf. Titus 1:2). God’s heart was big enough to forgive those who murdered His own Son (Acts 2:22­–41). He mustered enough compassion to forgive Paul, a murderer of Christians (1 Timothy 1:13­–15). He forgave the Corinthians who were guilty of all sorts of vile sins (1 Corinthians 6:9­–11). His grace has appeared to all (Titus 2:11); He wants all to be saved (2 Peter 3:9), and He invites all (Matthew 11:28–­30; Revelation 22:17). Surely God can forgive you and me.

Are you not glad that the Almighty God has these “weaknesses”?

1 According to Psalm 109:7, He may even count their prayers as sin.