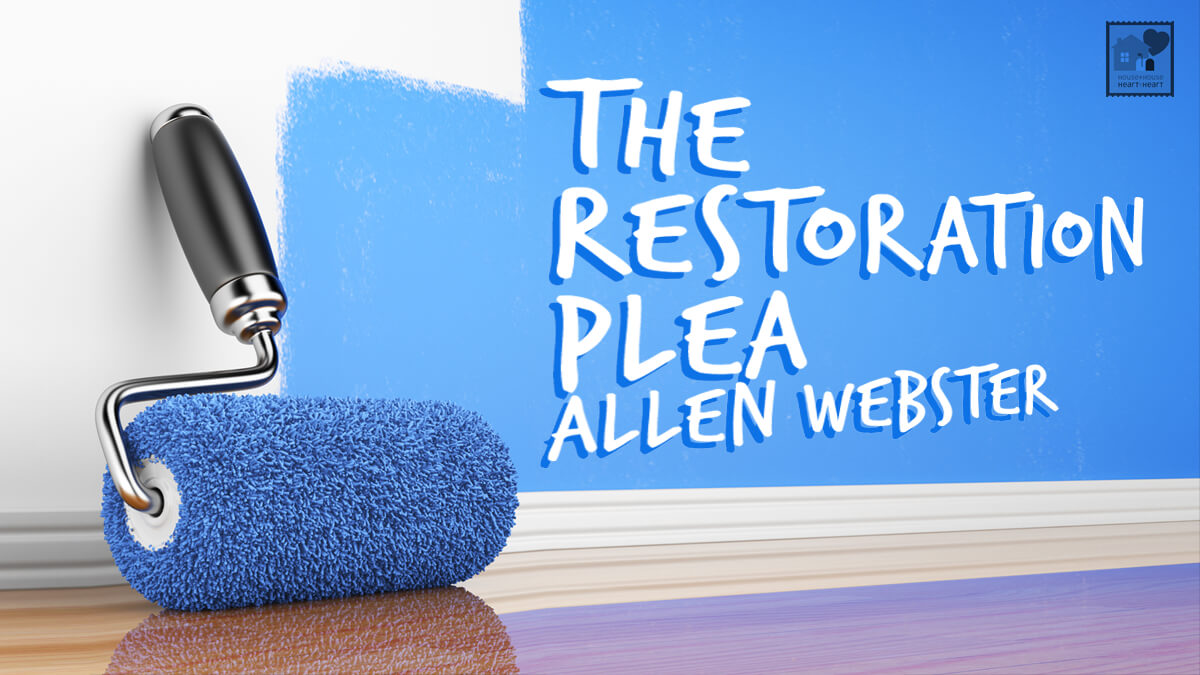 The Restoration Plea has been taught in our land for two centuries now, yet many in this generation have not heard it. It says:

When one speaks of a restoration plea, four things are implied.

1. The restoration plea implies that God had a plan for the church.

In the basement of America’s largest home, the Biltmore mansion in Asheville, North Carolina, there is a model of the structure. The model was completed first as a guide to build the home. In Barcelona, Spain, you can visit the still unfinished Sagrada Familia Church. Construction began in 1882, so they have been working on it for over 100 years. They have a model of what the building will look like when it is finished.

God has always had a pattern.

God has always had a pattern.

Isaiah prophesied of the coming kingdom, showing that God was already making plans for the church seven centuries before it came to be (Isaiah 2:2-4). Isaiah said God would “teach us of his ways, and we will walk in his paths.” Jesus sent out the apostles to teach those paths Mark 16:15-16). Since the early church “continued stedfastly in the apostles’ doctrine” (Acts 2:42; Acts 4:32), we know God’s messengers got His plan for the church delivered to the early Christians. Just as the fullness of God is in Christ (Colossians 1:19; Colossians 2:9) and God has no plans for salvation for the world outside of Christ (John 14:6; Acts 4:12), so the church is the fullness of Christ, and Christ has no plans for the world outside of His church (Ephesians 3:21).

2. The restoration plea implies that God expects us to continue to follow his plan.

The restoration plea implies that God expects us to continue to follow His plan in each succeeding generation. Paul wrote, “The things that thou hast heard of me among many witnesses, the same commit thou to faithful men, who shall be able to teach others also” (2 Timothy 2:2). God wanted His pattern followed century after century.

The Bible emphasizes patterns. Click to Tweet
In constructing the tabernacle, Moses was warned by God that he must “make all things according to the pattern” (Exodus 25:40; Hebrews 8:5). Paul spoke of the “pattern of sound words” (2 Timothy 1:13 asv) which early Christians were taught and in which they were to abide (2 Timothy 3:14). These Christians obeyed a “form” of doctrine (Romans 6:17-18) and “marked” (were on the lookout for) those who departed from that pattern (Romans 16:17). When it came to the doctrine of the New Testament, they earnestly contended for the faith (Jude 3), were warned about falling away from the faith (cf. 2 Thessalonians 2:3; 1 Timothy 4:1-3; 2 Timothy 4:1-4), and not to go “beyond the things which are written” (1 Corinthians 4:6 asv). Each generation was charged not to teach a “different doctrine” (1 Timothy 1:3 ASV).

By becoming too well known, a product can lose its distinctiveness. The Trademark Association calls this problem “genericide.” Marlin Connelly gives some examples:

This has happened to the words Christian and Christianity. Once brand names for a definite product, they are now used for any kind of vague religiosity connected loosely with the historical Christ. In the minds of some, the rigid New Testament ethical code is now fluid and accommodating. Doctrines that in Bible times were black and white are now gray and faded. Practices that were then commanded are now optional. For instance, the creed book of the largest Protestant denomination states:

It is most likely that in the Apostolic age when there was but “one Lord, one faith, and one baptism,” and no differing denominations existed, the baptism of a convert by that very act constituted him a member of the church, and at once endowed him with all the rights and privileges of full membership. In that sense, “baptism was the door into the church.” Now, it is different.²

God has not changed His mind.

Why is it different today? God has not changed His mind. Men have usurped authority not belonging to them and changed God’s church into something different from what He intended. Surely God wants us to return to His original vision for the church.

4. The restoration plea implies that God wants his people to restore his original pattern today.

In the long ago, God’s prophet urged, as we do today, “Stand ye in the ways, and see, and ask for the old paths, where is the good way, and walk therein, and ye shall find rest for your souls” (Jeremiah 6:16). Let’s go out among our neighbors with an open Bible and call them back to these old paths.

¹These points are not original, but I do not know from whom I first heard or read them.