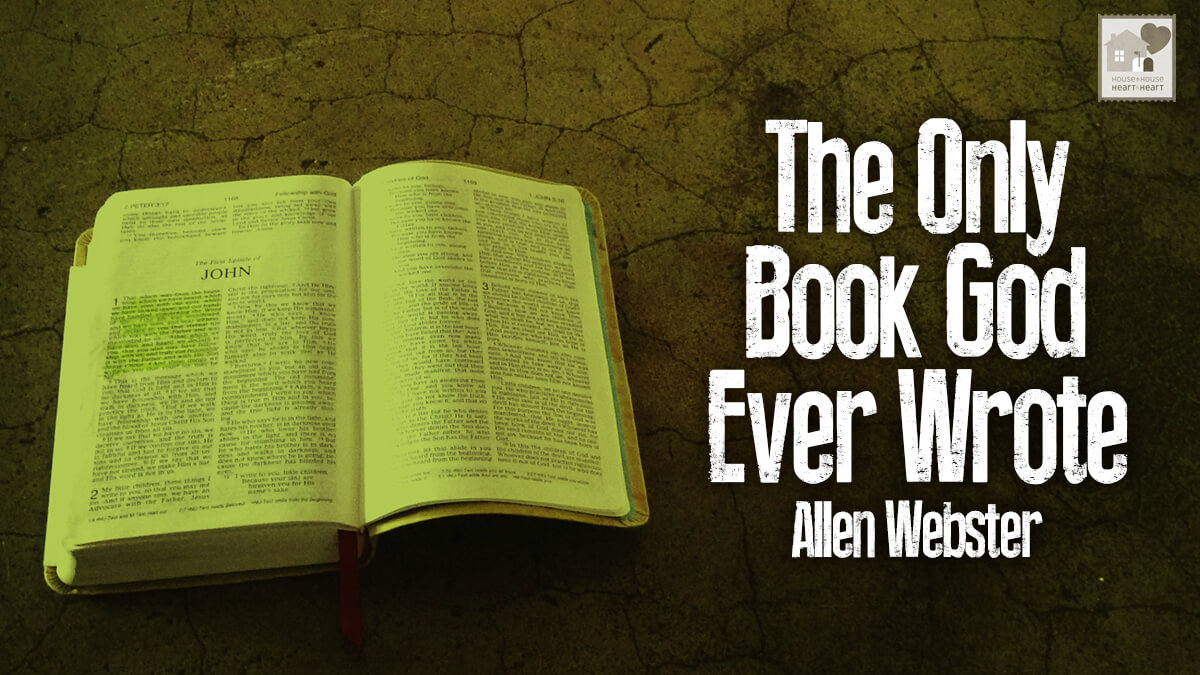 Home Bible Study The Only Book God Ever Wrote

Most popular authors are prolific. They write and write. Many had several books on the market before they became well known. God didn’t do that. If you go in a Books-A-Million and search a database for “books that God wrote,” you’ll only find one listing. Soren Kierkegaard put it this way: “The Bible is a letter from God with our personal address on it.”

The Whole Bible is the Holy Spirit’s creation.

J. I. Packer wrote, “God the Father is the giver of Holy Scripture; God the Son is the theme of Holy Scripture; and God the Spirit is the author, authenticator, and interpreter of Holy Scripture.”[popover title=”Source” title_bg_color=”” content=”Unless otherwise noted, quotations are from Edythe Draper, Draper’s Book of Quotations for the Christian World (Wheaton: Tyndale House Publishers, Inc., 1992). The Holy Spirit is the Interpreter of Scripture in the sense that one passage helps interpret another, not in the sense that the Spirit individually tells people what verses are supposed to mean to them.” content_bg_color=”” bordercolor=”” textcolor=”” trigger=”hover” placement=”” class=”” id=””]*[/popover] In Paul’s last book, and next to last chapter, he penned, “All scripture is given by inspiration of God, and is profitable for doctrine, for reproof, for correction, for instruction in righteousness: that the man of God may be perfect, thoroughly furnished unto all good works” (2 Timothy 3:16-17). It is God’s Word, but who revealed it? David said, “The spirit of the LORD spake by me, and his word was in my tongue” (2 Samuel 23:2; cf. Matthew 22:43; Mark 12:36; Hebrews 3:7-8). Peter further explained, “For the prophecy came not in old time by the will of man: but holy men of God spake as they were moved[popover title=”Meaning” title_bg_color=”” content=”phero, “to bear, or carry, be driven, lead.” content_bg_color=”” bordercolor=”” textcolor=”” trigger=”hover” placement=”” class=”” id=””]*[/popover] by the Holy Ghost” (2 Peter 1:21).

The Old Testament is God’s autobiography.

A five-year-old girl rushed up to her newborn brother in his hospital room and said, “Quick, what is God like?” She figured that, having just come from “Heaven,” he might have some inside information. Alas, he merely made a gurgling sound and rolled his eyes. “Little girls” are not the only ones who want the answer to that question. Philip once requested of Jesus: “Show us the Father” (John 14:8). The Bible shows us God’s picture; it tells us His story; it invites us to become His friend. The Old Testament, primarily, is the revelation of God to His creation. “He made known his ways unto Moses, his acts unto the children of Israel And Moses wrote all the words of the LORD ” (Psalm 103:7; Exodus 24:4). Without the Bible, we would be left to guess who the obviously powerful and intelligent being was who set this world in motion. It makes an enormous difference how we picture God. Philip Yancey writes:

“Is God an aloof watchmaker who winds up the universe and steps back to watch it wind down on its own? Or is God a caring parent who holds not just the universe but individual men and women in His hands? The Old Testament portrays God as a lion but also as a lamb, an eagle but also a mother hen (Ruth 2:12), a king but also a servant, a judge but also a shepherd (Psalm 23). God chose to live in a wilderness tent in order to live close to His people. We cannot box Him in, or explain Him away. No one tells Him what to do (the main point in God’s blistering speech to Job). Just when we think we have God pinned down, the Old Testament introduces a whole new picture of Him: as a whistler, a barber, a vineyard keeper. Like a drumbeat that never stops, in the pages of the Old Testament we hear the consistent message that this world revolves around God, not us. God is not a blurry power living somewhere in the sky, not an abstraction like the Greeks proposed, not a sensual super-human like the Romans worshiped, and definitely not the absentee watchmaker of the Deists. God is personal. Think of a doting parent with a video camera, coaxing his year-old daughter to let go of the living room coffee table and take three steps toward him. “Come on, sweetie, you can do it! Just let go. Daddy’s here. Come on.” Think of a love-struck teenager with her phone permanently attached to her ear, reviewing every second of her day with a boy who is himself infatuated enough to be interested. Think of those two scenes and then imagine God on one end and you on the other. That is the message of the Old Testament. If the Old Testament’s overwhelming lesson about God is that He is personal and intimate, its overwhelming lesson about human beings is that we matter.”[popover title=”Source” title_bg_color=”” content=”Philip Yancey, The Bible Jesus Read, Zondewan Publishing Co., 1999, p. 27-35″ content_bg_color=”” bordercolor=”” textcolor=”” trigger=”hover” placement=”” class=”” id=””]*[/popover]

The New Testament is the autobiography of Jesus.

More books have been written about Jesus than any other historical character, yet only one is definitive. It is His own “last will and testament.” The closest Jesus came to writing a book while on earth was when He stooped in the presence of the sinful woman’s accusers and scratched something in the dirt (John 8:6-8). He was many things while on earth, but a writer was not one of them. But that changed when Jesus returned to heaven. According to Revelation 1:1. Jesus sent a “revelation” back to earth from heaven. This word, revelation (apokalupsis), means, “an uncovering,”[popover title=”Meaning” title_bg_color=”” content=”From apokalupto “to uncover, unveil; apo, from, kalupto, to cover” (Vine). Thayer says it means “a laying bear, making naked.”” content_bg_color=”” bordercolor=”” textcolor=”” trigger=”hover” placement=”” class=”” id=””]*[/popover] so you could say He is a “mystery writer.” The Book of Revelation is not only a revelation from Christ, but also a revelation about Christ. He is both the Revealer and the Revealed One. In that sense, the last book of the Bible is Christ’s autobiography. In it He is the Priest-King (Revelation 1), the Judge of churches (Revelation 2 – 3), the Creator (Revelation 4), the Redeemer (Revelation 5), the Conqueror (Revelation 6 – 20), and the Bridegroom (Revelation 21 – 22). It begins with a vision of His glory, wisdom, and power (Revelation 1) and ends with a prayer for Him to “come quickly” (Revelation 22:7, Revelation 22:12, Revelation 22:20). It also reveals that He will rule forever over the heavenly city in the presence of all who know Him (Revelation 21:22).

Actually, the whole New Testament, not just its last book, is a “revelation of Jesus Christ.” Paul wrote. “How that by revelation he made known unto me the mystery; (as I wrote afore in few words, whereby, when ye read, ye may understand my knowledge in the mystery of Christ) which in other ages was not made known unto the sons of men, as it is now revealed unto his holy apostles and prophets by the Spirit; that the Gentiles should be fellow heirs, and of the same body, and partakers of his promise in Christ by the gospel” (Ephesians 3:3-6).

Christ is the world’s preeminent character.

We date our letters, and everything else, from the year of His birth. The greatest event in the history of the world was the coming of Christ into this world. The greatest words ever spoken were His words. The greatest deeds ever done were accomplished by His hands. The greatest gift ever offered was His blood at Calvary. Whatever progress the human race has made has been due to His influence. All history is mystery until it has been understood as “His-Story.” And the Bible is the book that reveals all this to us. The famous preacher George Whitefield said, “God has condescended to become an author; and yet people will not read His writings. There are very few that ever gave this Book of God, the grand charter of salvation, one fair reading through.”