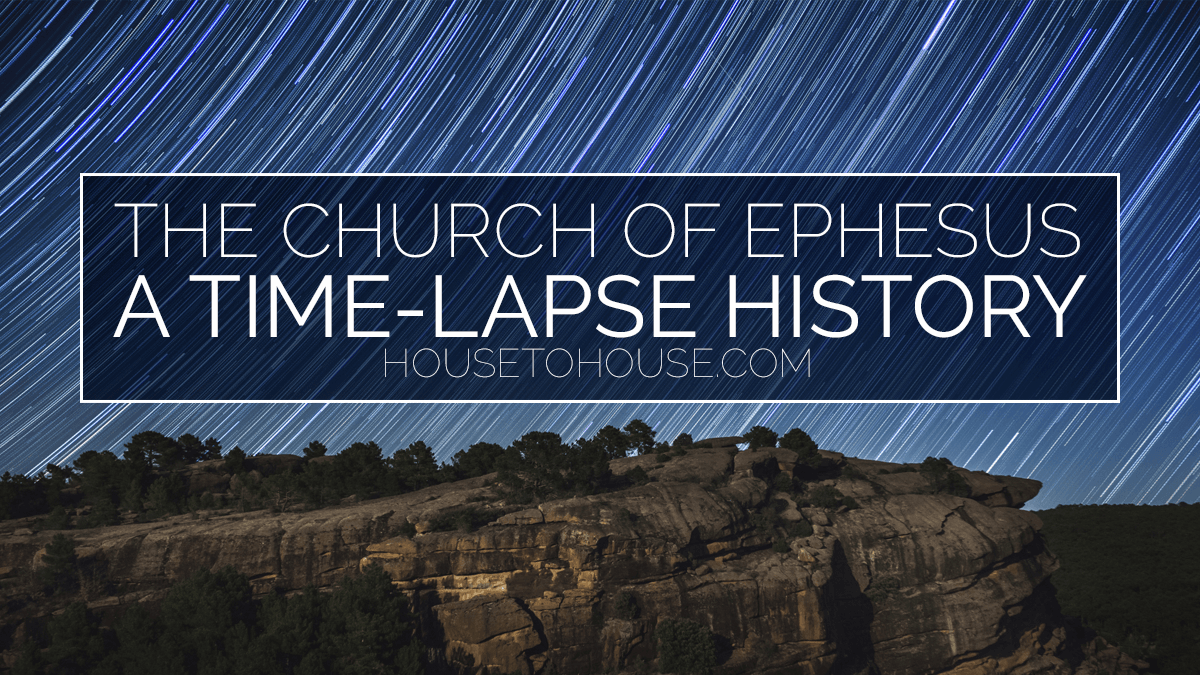 Modern photography is amazing. With one lens, a photographer can zoom in on an object far and make it appear near. Then he can put on a wide-angle lens and get the big picture from close-up.

Time-lapse photography is one of the most interesting methods. Every night, the weatherman shows how clouds advanced over our area with satellite pictures. Though seeming to be in continuous motion, they are actually taken by time-lapse every half-hour or so and placed in sequence. You may have seen a flower photographed in this way and made to appear to sprout before your very eyes. If one had watched constantly, the changes were taking place so slowly that they would not have been noticeable.

What about applying time-lapse to history? Let’s look at the church of Christ at Ephesus.

On Paul’s second mission tour, he visited Ephesus after leaving Corinth, and evidently planted the church there (Acts 18:19). Ephesus means desirable, and in many ways it was a desirable place to live. It was thought to have been founded by the Amazons about 2000 B.C. and was located in west Asia Minor, near the sea. This first glimpse is of sprouts just cracking open the ground.

On the third preaching journey, Paul spent between two and three years teaching in the city (Acts 19:8-10). He spent his time weeding out false doctrines and pagan practices. Ephesus derived its greatness from two sources, commercial trade and religion. During the Roman Period it was a center for the mother goddess worship, known to the Greeks as Artemis and to the Romans as Diana.

Diana is a beautiful name, and one might suppose that Diana would be a beautiful goddess. To the contrary, Diana of the Ephesians was a short, squat, repulsive-looking character covered with many breasts which emphasized fertility. It was believed by the superstitious Ephesians that Diana fell down from heaven. The magnificent temple of Diana took more than a century to construct. It was built about 400 B. C. and burned the night Alexander the Great was born. Immediately rebuilt, it could accommodate 24,500 persons and is reckoned as one of the seven wonders of the ancient world.

Nonetheless, this teaching in the school of Tyrannus was so successful that those who practiced magical arts brought their books and burned them (valued at 50,000 pieces of silver) (Acts 19:18-20). The sale of silver shrines began to fall off, and the silversmiths caused uproar (Acts 19:26-41). After this was settled Paul left for Macedonia. It was during this stay that he wrote 1 Corinthians. It is now a well-groomed garden – the church even has elders.

Paul stopped on the nearby island of Miletus and made his farewell address to the Ephesian elders (Acts 20). Their mutual love is evident as these tenderhearted men weep because they will see Paul’s face no more. Their desire to depart with prayer gives evidence of their spirituality. The picture now is of a church that has been carefully nurtured to the point of strong health.

About a decade after the church had been started, Paul wrote a letter to the Ephesians commending their faith and love. A careful reading of this epistle shows that they had done well. They appeared well organized and busy. During these early years they had been growing, expanding and doing the will of God. He commends their sincerity (Ephesians 6:24). Teaching is to Christians what watering is to plants – necessary and strengthening (1 Corinthians 3:6). Timothy (1 Timothy 1:3-4), Acquila and Priscilla (Acts 18:25), and Apollos had all spent time watering the Ephesian church. It should have been one of the most thoroughly instructed of all the first-century congregations. The picture now is a well-watered and self-sufficient church.

A few years later, in all probability very soon after the beginning of the Jewish war, tradition says that the city became the home of the Apostle John. This may or may not be true, but circumstances make it possible, if not probable. He was supposed to have taken Mary, the mother of Jesus, there to live (cf. John 19:26-27). This picture is of a church faithfully serving their Lord and producing the fruit of the Spirit (Galatians 5:21-23; John 15:1-3).

It was probably during the reign of Domitian (81-96 A.D.) that John was banished to Patmos. He was released and died during the reign of Trajan according to Iraneus (an early church historian). Tradition relates that at a very old age John, too feeble to walk, would be carried into this church’s assembly and would admonish the members, little children, love one another. During this period the Lord gives His assessment of the Ephesian church through the apostle John (Revelation 2:1-7). He compliments them on their works, but has found a disease in the plant. They have left their first love (Revelation 2:4). He commands immediate action – repent, remember, repeat (the first works) (Revelation 2:5).

We have no way of knowing whether they corrected their problem and later were poisoned by some false doctrine, but, sadly, the church died sometime during the second century. It evidently passed into apostasy as it is known in later centuries as a leading city for the councils of the early Roman church. The picture now is of a dead plant, brown and dried up.

Time-lapse photography is interesting. What if the church where we attend had been historically photographed? At which stage would we now be? The ending does not have to be a sad one, the Lord’s vineyard need never die. He will come one day and transplant His faithful vineyards over in the land when the tree of life and the Rose of Sharon continually bloom.