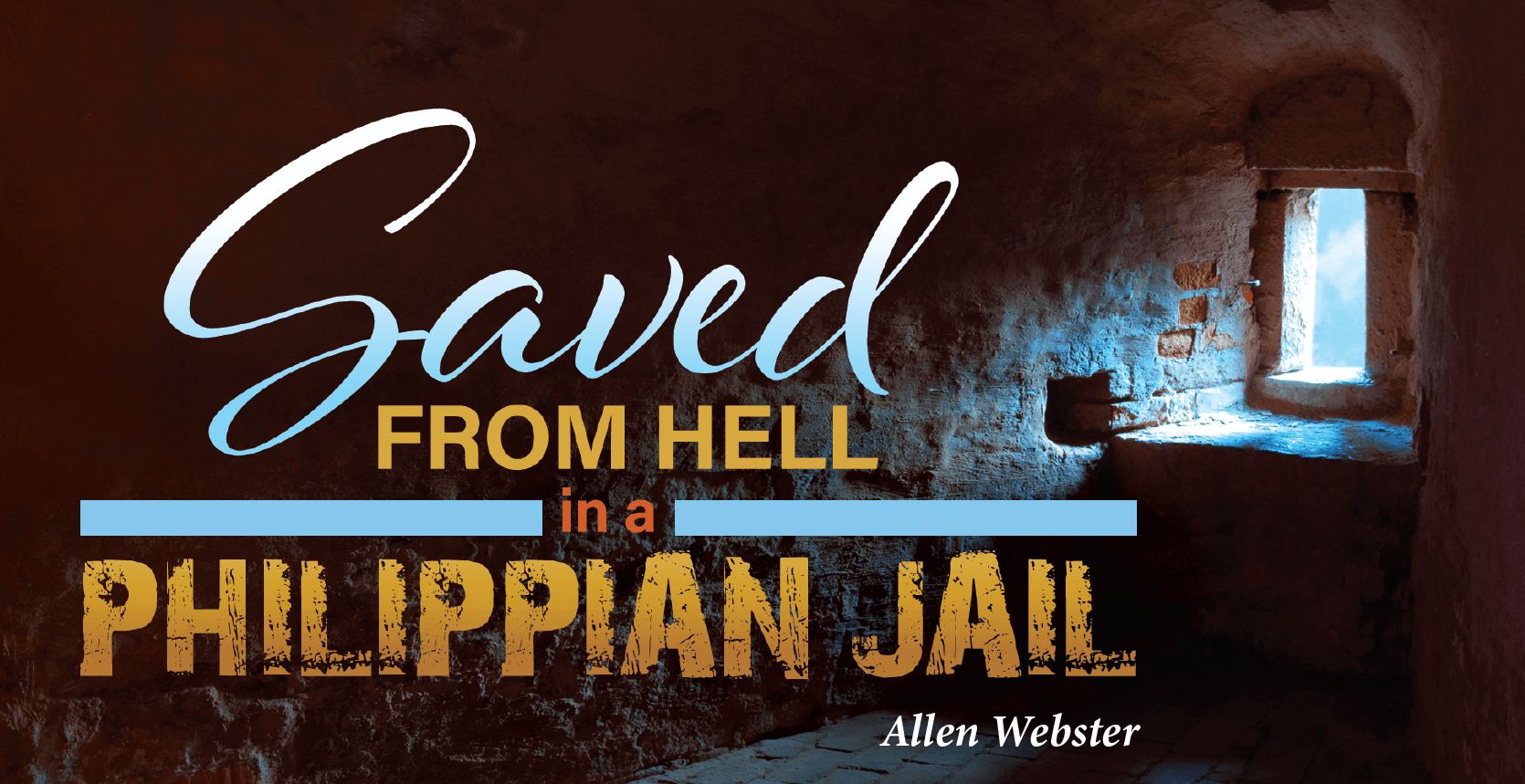 Home Salvation Baptism Saved from Hell in a Philippian Jail

Salvation has been found in many unlikely places. Men’s hearts have been warmed by God’s love in Antarctica and their bodies baptized in deserts.

Christ has been confessed in Muslim countries, risking persecution, and in Communist nations where God had been declared dead.

Missionaries have found a single receptive soul among the teeming millions in urban population centers and converted whole villages in earth’s most remote extremities. Battlefields and bars have often hosted impromptu Bible classes.

The young have been saved on university campuses and the old in nursing homes. The illiterate have been drawn to the Friend of Sinners and university professors to the Teacher of Nazareth. Many just entering accountability choose Christ, and others are snatched from Satan on their last day of life.

On the other hand, one can go to hell from anywhere. Citizens living in the Bible Belt of a Christian nation may be as far from God as the staunchest atheist in the most secular nation. A home with a dozen Bibles can be as degenerate as one that has none. Those reared in Christian families may be prodigals. Preachers can forsake the gospel they once preached. Those living beside church buildings may never attend a single service.

Still, all things being equal, a good environment aids God’s cause and a bad one lends itself to the devil’s work. Perhaps, therefore, it is harder to go to heaven from a prison than any other place on earth.

This makes the Philippian jailer’s rescue even more remarkable. (Read Acts 16:25–34.) This man, having his prisoners safely locked away for the night, went to sleep neither expecting nor desiring rescue (Acts 16:23–24). About midnight, startling events began unfolding that forever changed his life.

he found life at the precipice of death

It all began with an earthquake. Awakened, his first thoughts were of the prisoners. Seeing the doors open, he assumed what any warden would: They’ve escaped!

His second thoughts were of consequences. They were not of the there-goes-this-year’s-bonus or no-promotion-for-me-now variety. It was far more serious.

Guards who let prisoners escape were executed (Acts 12:19). He knew how this would play out. An interrogation would find he had slept at his post. Disgrace, beating, and execution would follow.

Hopeless, he decided to save them the trouble. He would fall on his sword and that would be that. When they found the empty prison, they would also find a dead warden. They would fill out the paperwork, chase down the prisoners, and appoint a new jailer.

How Paul knew what was going on outside his cell and inside the jailer’s mind is unknown (perhaps by miracle), but his voice called out of the darkness at just the right moment. To this suicidal man at death’s door, he said, “Do thyself no harm: for we are all here” (16:28).

Startled, the jailer must have thought: Who said that? Is this true? Why would criminals stay in a prison with open doors? He found it so.

Then it hit him. I almost died.

Flight or fight adrenaline hit his bloodstream. His thoughts raced. What if I had done it? Where would I be now? I’m not ready to die! I’ve never made peace with my Maker. If there is a heaven, I’d have missed it. If there is a hell, I’d be in it.

At that moment—probably for the first time—the idea of being lost hit him.

What was I thinking?

How far was the sword from his vital organs when Paul’s voice arrested it? Six inches? Three? How many seconds was he away from his last breath? Sixty? Thirty?

Then it hit him. I almost died.

Any person can be on death’s precipice at any time. There is but a step—a car accident, a heart attack, a stray bullet—between any man and death any day. We are wise to prepare—and stay prepared—to proceed to the next world on short notice (1 Samuel 20:3; Luke 12:20; James 4:14).

He was as close to a hopeless judgment as any man has ever been, yet there, in that Philippian jail, he was rescued from hell.

The jailer was a man of few words. We know of only twenty-three words he ever said, but among them is this question: “Sirs, what must I do to be saved?”

The Bible contains about 3,300 questions, but this is the greatest of all. No poet, bard, philosopher, or scholar has surpassed this short, simple query. It is the greatest because it is universal (Romans 3:23), personal, is about our deepest need, deals with the longest duration, and implies both divine grace and human responsibility.

Acts 16:31 is one of the great verses of the Bible. God’s briefest answer to man’s deepest question has two parts:

“What must I do to be saved?” is asked three times in Acts:

Combined, there are three answers: (a) Believe; (b) Repent; (c) Be baptized.

Everyone must make the same trip; some are just farther down the road than others.

Everyone must make the same trip; some are just farther down the road than others. Suppose you were on the road to Philippi and asked a passerby, “How far is it to Philippi?” He says, “Three miles.” A mile farther you ask, “How far to the city?” The answer: two miles. You keep walking: “How far?” “A mile.” The same question received three answers but all were correct.

A senior asks, “What must I do to obtain a PhD?” Her advisor replies, “Finish high school. Get a college undergraduate degree. Then get your master’s degree. After that apply to a doctoral program.” A college graduate who asks this is not told to “complete high school, and enroll in college.” He has done these. One with a master’s degree gets an even shorter answer.

The same is true regarding salvation.

Believe was the first thing he had to do, so Paul told him that. Yet like the blind man who said, “Who is he, Lord, that I might believe on him?” (John 9:36), the jailer needed more information. He did not know this “Christ.” He had never been to a church service to hear a gospel sermon.

When his household arrived, Paul taught “the word of the Lord” (16:32), explaining who Jesus is and what He requires. We can know what he taught by simply observing what they did.

Between midnight and sunrise they completed the same three requirements as the others—believing (16:34), repenting (indicated by washing stripes, 16:33), and baptism (16:33), resulting in salvation, service, and rejoicing (16:34).

he learned and obeyed the gospel in a single night

The jailer went from pagan to Christian in less than six hours. That might be the all-time record.

In some ways, his is the most remarkable conversion in the New Testament. Pentecost was larger and was accompanied by a greater miracle, but conversion was a natural progression for Jews looking for the Messiah, once convinced that Jesus is the Christ (Acts 2; Galatians 3:26). The conversion of Cornelius, although he also was a Roman, is less surprising, for he had been exposed to Judaism and was sympathetic to the true God (Acts 10). Saul of Tarsus was a more noteworthy turnaround; but a devout person turning to pursue a better religion is not unheard of (Acts 9).

Yet this Roman jailer would never have read Jewish prophecies. Philippi was nothing like Cornelius’ post in Joppa. He was not a devout man looking for a life path.

once offered salvation, he did not eat, drink, or sleep until he possessed it

The jailer was baptized “the same hour of the night,” which was sometime after midnight (Acts 16:25, 33). The church would meet in Philippi the next Sunday (16:40), but he did not wait a few days. It would be easier after daylight, but he did not even wait until sunrise.

This decision reflected his wisdom in taking advantage of his opportunity (Ephesians 5:16). Paul would be released and move the next day. It is consistent with baptism’s purpose: Why wait to be saved? (Mark 16:16). It is consistent with other conversions. In Acts, as soon as one knew the gospel, he obeyed it—whether after a Sunday sermon, midweek, or midnight.

What would it have been like to hear Paul preach about Jesus? The chief of sinners (1 Timothy 1:15) speaking of the One who saved him by His grace? The jailer likely never knew how blessed he was to have had this man assigned to his watch.

Consider how unlikely it was that this Roman would ever become a follower of Christ. Jesus had lived, taught, and died in a distant land. He had nothing in common with Jesus. They spoke different languages, wore different styles, ate different foods, and held far different worldviews. Jesus’ death by crucifixion was at the hands of the jailer’s own national army. Romans despised the Jews (Acts 16:20), Jesus’ nation.

Decades had passed. The gospel had only recently arrived in his area. He had no interest in it. He had just locked up the only preachers of it. None of his family or friends or acquaintances were Christians.In fact, there was only one Christian family on the whole continent—and he didn’t know Lydia from Thyratira.

That “somehow” is the love of Jesus. Salvation is beyond us; it lies in Him. It is not of achievement, merit, works, or worth, but of trust, submission, obedience, and faith (John 3:16; Ephesians 2:8–9; Titus 3:5–7; Hebrews 5:8–9). Our trusting obedience saves us only in the sense that it makes a way for Christ to save us.

Jesus wants to rescue you. Have you believed, repented, and been baptized for the forgiveness of your sins? Remember, you can go to heaven from wherever you are.

If you want to become a Christian, we would count it an honor to assist you. Visit Sunday!