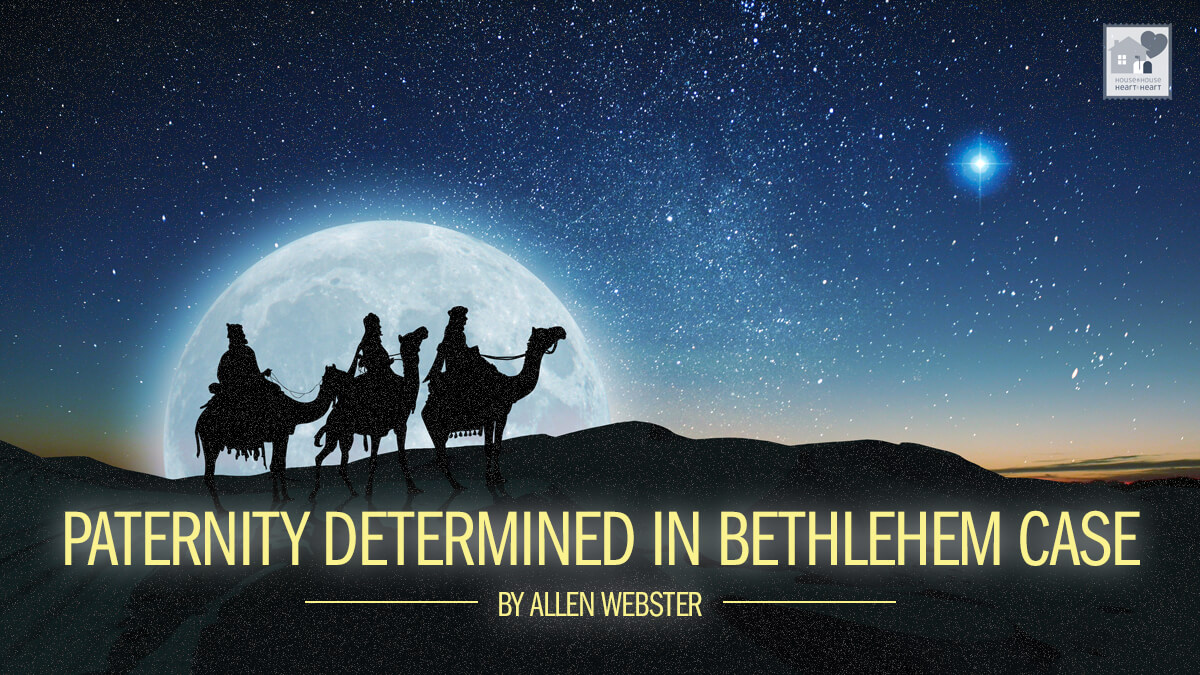 Where paternity of a child is in question, a court determines paternity based initially upon sworn statements and then upon testimony or other evidence.

In the Bethlehem Case, the Father finally came forward. A definitive answer was reached in a bizarre case. Joseph and Mary had been telling the truth after all. A virgin had conceived (Isaiah 7:14).

A voice from heaven claimed the Son. The eternal God shook the earth around the Jordan River with a declarative pronouncement of paternity (Matthew 3:17). He later interrupted Peter’s speech with the same acknowledgement (Matthew 17:5). On both occasions, Jehovah said, “This is my beloved Son, in whom I am well pleased.” So at a crowded river one day and on an isolated mountain one night, God twice signed the birth certificate.

These are words of affirmation: “This is my beloved Son.”

On the Mount of Transfiguration (Matthew 17), the statement highlights the contrast between Moses and Elijah and Jesus. The first two were God’s servants; Jesus is God’s Son. In calling Jesus His Son, the Father declared Him to be of identical nature and essence with Himself (cf. John 5:17-20; John 8:19, John 8:42; John 10:30, John 10:36-38). In calling Him “beloved,” He showed that it was not just a biological connection, but a relationship bond.

The two common descriptions used of Jesus emphasize His dual nature: “Son of man” emphasizes His humanity (cf. Luke 19:10); “Son of God” emphasizes His deity (John 20:30-31). Jesus possessed the nature of God—He was part of the Godhead (Colossians 2:9). The Bible often refers to Jesus as “God” (John 1:1; Hebrews 1:8). That does not mean that Jesus is God the Father, but that He possesses the same divine nature as His Father.

What is the significance of the timing of the pronouncement? The Father did not claim paternity at the Bethlehem manger, as might be expected (Luke 2:1-7). He did not claim His Son at His bar mitzvah in His twelfth year (Luke 2:42-52). He acknowledged Him instead at the beginning of His personal ministry, which started in earnest at His baptism. His second pronouncement came on the same field trip on which Peter had voiced his (and likely all the disciples’) conclusion that, “Thou art the Christ, the Son of the living God” (Matthew 16:16). This was only about six months before the crucifixion, and coincided with the final specialized training that Jesus gave His disciples in preparation for His departure. The Jews needed to know that Jesus was God’s Son when they were in His presence; the disciples needed confirmation before they were launched into the world to affirm it in His absence.

What other evidence is there in favor of divine paternity?

The testimony of prophecy. The prophets repeatedly predicted that God would come to earth—even giving precise details as to the form and circumstances of His visit (Isaiah 7:14; Isaiah 9:6; Isaiah 40:3; Isaiah 44:6; Jeremiah 23:5-6;Micah 5:2; Zechariah 13:7). Some statements must have been puzzling to both the prophets who wrote them and the scribes who copied them through the years. Though this child was to be born in Bethlehem, for instance, His goings forth were “from old, from everlasting” (Micah 5:2). He was Jehovah’s “fellow” (Zechariah 13:7), the God for whom John the Baptizer would prepare the way (Isaiah 40:3). He was God who was “with God” in the beginning (John 1:1), thus, eternally existing before Abraham was born (John 8:58).1

One of the most prominent Old Testament prophecies, and one that ties directly to God’s announcement, is Psalm 2:7. “My Son” echoes the messianic promise of the second psalm: “The Lord hath said unto me, Thou art my Son; this day have I begotten thee”. This is one of the most oft quoted Old Testament prophecies of Jesus (Acts 13:33; Hebrews 1:5; Hebrews 5:5; cf. John 1:14, John 18; John 3:16). Another that ties in closely is “mine elect” upon whom God promised to put His Spirit (Isaiah 42:1).

God gave the ultimate indisputable proof of paternity and fulfillment of David’s prophecy . . .

God gave the ultimate indisputable proof of paternity and fulfillment of David’s prophecy, not as Jesus came from the womb, but when He came from the tomb. “God hath fulfilled the same unto us their children, in that he hath raised up Jesus again; as it is also written in the second psalm, Thou art my Son, this day have I begotten thee” (Acts 13:33; cf. Acts 28 – 32). Christ was “begotten” from the virgin womb to a humble life of service, and from the virgin tomb to a glorious life of resurrected power.

The testimony of others who knew Him. The Father’s voice on the Mount of Transfiguration was addressed not to Jesus—though He heard it and was comforted by it—but to the three disciples outside the cloud. The purpose was to confirm the disciples’ faith; to make known to them that it was their duty to follow Christ rather than any other, and to honor Him more than Moses (the Law) and Elijah (the prophets). It helped strengthen their faith in Him, so that when they went out to preach the gospel after He was shamefully put to death, they would not waver under intense scrutiny and persecution. After hearing God’s voice and seeing Christ’s glory, it was impossible for them to doubt that He was truly the Son of God (2 Peter 1:17-18).

The apostles were uniquely qualified to be the world’s eyes to determine for all of us if Jesus’ claims of divinity were trustworthy or fraudulent. John, one belonging to the prominent inner circle of these disciples, later wrote,

Note that the evidence was

The testimony of angels. Gabriel not only told Mary that she would have a Son (become a mother), but he also informed her, “that holy thing which shall be born of thee shall be called the Son of God” (Luke 1:35). God’s Beloved was attended by ministering spirits often on His sojourn among men. Angels announced His birth (Luke 2:9-12), sang praise to the baby (Luke 2:13-14), ministered to Him in His most human moments (Matthew 4:11), remained on call during His crucifixion (Matthew 26:53), visited His empty tomb on resurrection morning (John 20:12), and escorted Him back to heaven (Acts 1:9-11).

The testimony of His cousin John. John knew Jesus longer than any of His followers—much longer than the apostles. He grew up with Him. They were born six months apart and grew up in the same area. John, therefore could draw on years of experience. Doubtless he had heard from his mother the story of Mary’s visiting with news of pregnancy—without the usual aid of a father (Matthew 1:18-25).

He could go back through his memories of their playing together as children. Were there ever any times when Jesus disobeyed His parents or mistreated His playmates? No, John couldn’t think of any. As teens, were there ever any times when Jesus suggested they break any laws of the land or of the Lord? No, now that you mention it, He never did. He went back over the prophecies he had studied from the Old Testament as a boy in synagogue. Were these talking about his cousin? They all fit Jesus’ circumstances and life.

Most important, John had been there when the Holy Spirit descended on Him like a dove, and remained on Him (Matthew 3:16). What was John’s conclusion? “And I saw, and bare record that this is the Son of God” (John 1:34). Note that John did not omit the definite article as though Jesus was “a” son of God, but made it clear that Jesus was “the Son of God.”

John even pointed out the irony of the Savior walking around among them and they did not know Him. “There standeth one among you, whom ye know not; he it is, who coming after me is preferred before me, whose shoe’s latchet I am not worthy to unloose . . . The next day John seeth Jesus coming unto him, and saith, Behold the Lamb of God, which taketh away the sin of the world. This is he of whom I said, After me cometh a man which is preferred before me: for he was before me” (John 1:26-30.

These are words of commendation: “In whom I am well pleased” (Matthew 3:17).

God loves everything about His Son (Isaiah 42:1)—His life, words, appearance, compassion, church, yes, even the people associated with Him (John 3:16; Romans 8:32). Parents enjoy seeing their children make friends and bring them home for sleepovers and birthday parties. They delight in those their offspring choose for mates and accept them as their own. God, in a similar way, accepts His Son’s friends (John 15:14) and will welcome us into His house for an eternal “sleepover,” as the bride of His beloved Son (1 Corinthians 15:24-26).

Jesus was the only Son who never once disappointed His Father. He was always a “delight” to Him (Malachi 3:1). God presented His Son at the temple, as Malachi prophesied, at least three times:

At Jesus’ baptism, God was not only complimenting Jesus on the occasion, but He was also acknowledging the perfection of His life to that point. God gave equal approval near the end of Jesus’ ministry (Matthew 17:5). In raising Christ from the dead, God gave the ultimate commendation of the sinless life of His Progeny (Romans 1:4).

These are words of exaltation: “Hear Him.”

These two simple, arresting words from heaven were added at the Mount of Transfiguration (Mark 9:7). The disciples wanted to detain Moses and Elijah so they could hear them; God reveals that they do not belong on the same “stage” with His Son. Moses was the founder of Judaism; Elijah its reformer. Now, the system which one inaugurated and the other enforced was undergoing a change. Their product was but “a shadow of things to come; but the body is of Christ” (Colossians 2:17). The law was a “schoolmaster to bring us unto Christ” (Galatians 3:24). They yield the stage to one greater (John 5:39, John 5:46; Luke 24:27).

What Moses, Elijah, and the prophets had to say was wonderful (Hebrews 1:1), but what the Son has to say is better (Hebrews 1:2-3). As the way, the truth, and the life, no man could now come unto the Father except through Him (John 14:6). Go no more to the law, nor to the prophets, to seek for a coming Messiah; for, behold, the Messiah is here!

These words looked to the immediate situation (practical). God’s voice bid the disciples to hear Christ’s voice. “Hear him” carries the meaning of, “Listen to Him!” The twelve needed this advice because they did not always listen to God’s Son. Occasionally they thought their wisdom surpassed His (Luke 8:45). Peter once descended to the level of flat contradiction (Matthew 16:22). They all often had the “Mohammed Ali” syndrome—they wanted to be “the greatest” (Luke 9:46; Luke 22:24).

These words looked backward (prophetic). God seems here to refer to Moses’ prediction, “God will raise up unto thee a Prophet from the midst of thee, of thy brethren, like unto me; unto him ye shall hearken” (Deuteronomy 18:15; cf.Deuteronomy 18:15-19). Peter later quotes the same passage to make the same point: “And it shall come to pass, that every soul, which will not hear that prophet, shall be destroyed from among the people” (Acts 3:22-23).

Amid the religious babble of this day, we must listen to the clear authoritative voice of Jesus. We are not to hear the voice of the conscience, the church, the papacy, the modern-day “prophet,” nor the cultic leader. We must hear Christ when He

Leaving Christ in unchallenged supremacy, Moses and Elijah faded away so the glorious Lord remained on stage by Himself. King Jesus now reigns in His Kingdom today—the kingdom of hearts.  Like the disciples who heard God’s voice, we must not “refuse Him that speaketh” (Hebrews 12:25). May our hearts within us always say, “Speak; for thy servant heareth” (1 Samuel 3:10).

Let there be no doubt as to the paternity of Jesus of Nazareth. His Father has signed the document. His name is cleared. His pedigree is established. Let the earth acknowledge Him.

3 Wendell Winkler, Tell Me the Story of Jesus, Winkler Publications. 2003.