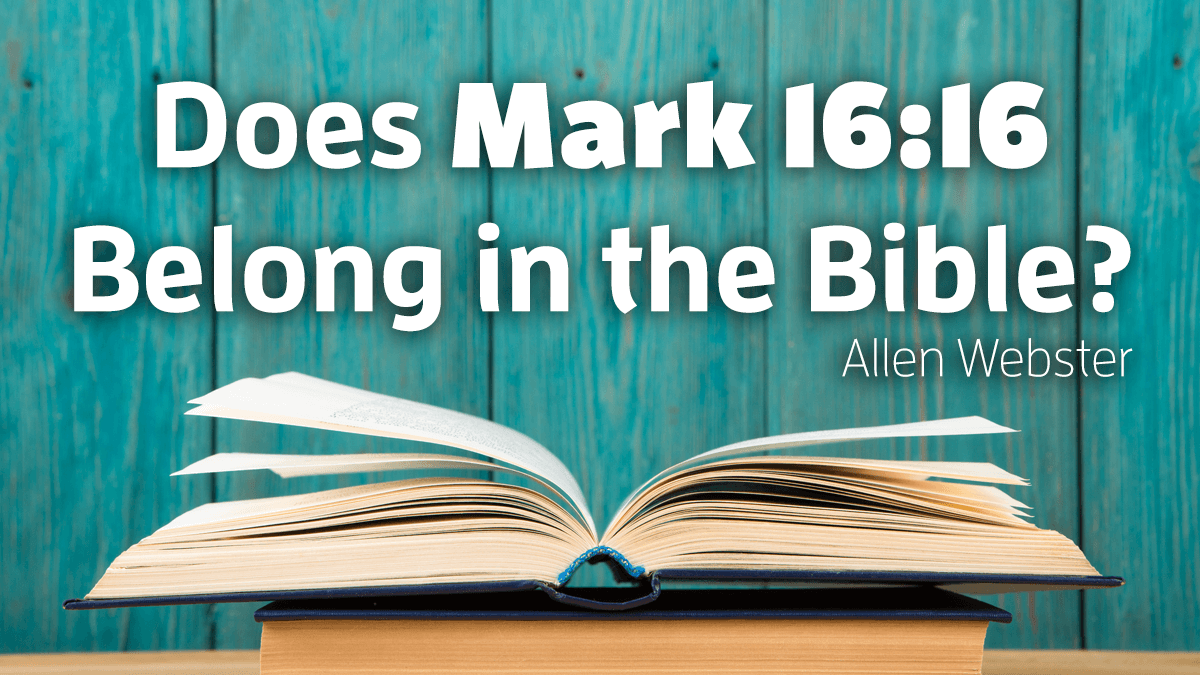 Home Bible Questions Does Mark 16:16 Belong in the Bible?

Some modern Bibles cast doubt as to whether the end of Mark (including Mark 16:16) belongs in the Bible.

Despite this, one can have confidence that this passage belongs in the New Testament. Here’s why:

There are two families of Bible manuscripts:

Most ancient manuscripts have it. Out of 620 manuscripts that contain Mark, only two omit the last 12 verses. The Alexandrian Manuscript itself, considered one of the three best manuscripts, includes it. Mark 16:9–20 is in all the ancient translations and versions.

The two manuscripts missing Mark 16:9–20 might have once had it (or intended to include it).

The Codex Vaticanus and Codex Sinaiticus, both from the Alexandrian line, do not include Mark 16:9–20. Yet Siniaticus leaves space for these verses, as if the copyist had not finished his work. Sinaiticus ends at the bottom of a page as if the last page is torn off and missing. If an early copy of Mark was missing the last page, later scribes would also leave it out.

It is not unusual for passages to be missing from ancient manuscripts, but these omissions are not mentioned in English translations. If there are 100 manuscripts that read the same and one has a variant, then scholars are confident the verse is included. If the preponderance of evidence is for including a passage, then no footnote is added to explain that. Both the Vaticanus and Sinaiticus omit thousands of words, phrases, and sentences in the four gospel accounts alone, yet there are no brackets or disclaimers around these verses. The Vaticanus left out dozens of entire chapters in the Bible (including the book of Hebrews). Yet these are included because the preponderance of evidence from more than 5,000 other manuscripts shows they should be included.

The omission of Mark 16:9–20 leaves the book of Mark ending in fear.

Mark 16:8 reads, “They went out quickly, and fled from the sepulcher; for they trembled and were amazed: neither said they anything to any man; for they were afraid.” Without 16:9–20, we have no eyewitnesses of Jesus’ resurrection, which makes it inconsistent with Matthew, Luke, and John. Three women saw an empty tomb and heard an angel announce the resurrection, but no one sees Jesus resurrected.

Early Christians quoted Mark 16:9–20 as Scripture before the manuscripts that left them out ever existed.

Before any of these manuscripts were written, well-known individuals in the early church quoted many Bible verses that were omitted from the Sinaiticus and Vaticanus. The end of Mark is among them. It was quoted before ad 200, which is more than a century before the famous manuscripts left it out. (The Vaticanus dates to ad 300–325; the Sinaitus to ad 330–360.)

Irenaeus of Lyons, who is said to have known John personally, quoted Mark 16:19 around ad 170, saying “But Mark in the end of his gospel says, ‘And the Lord Jesus, after that He had spoken to them, was received up into heaven, and sat at the right hand of God.’” Other early writers who cited these verses as Scripture include Papias, 130, Justin Martyr, 160; Tatian, 172; Tertullian, 220; Aphraates, 367; and Didymus, 398.

The Bible has been preserved by God because Jesus said, “Heaven and earth shall pass away, but my words shall not pass away” (Matthew 24:35).