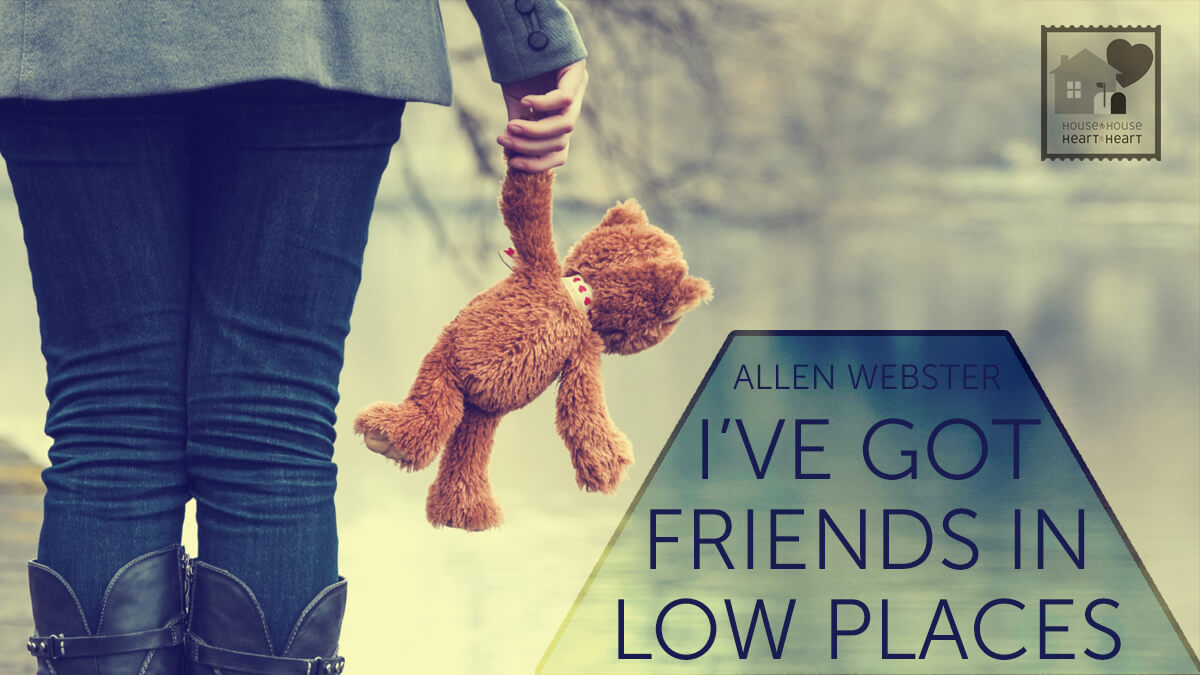 Garth Brooks’ classic song long ago ascended and descended the charts. Yet it still enjoys considerable airtime on country stations. Its theme was not exactly sermon material, but then again, he may be on to something. I do have friends in low places.

I’ve Got Friends in the Low Place of Sin.

The first verse of the great gospel hymn “Love Lifted Me” says,

“I was sinking deep in sin/ Far from the peaceful shore,
Very deeply stained within/ Sinking to rise no more;
But the Master of the sea/ Heard my despairing cry,
From the waters lifted me/ Now safe am I.”

We sing it in the past tense, but many of our friends would have to use present tense verbs to be honest. Sin always brings the sinner down: “O remember not against us former iniquities: let thy tender mercies speedily prevent us: for we are brought very low” (Psalm 79:8). Again, a Hebrew hymn lamented: “. . . and were brought low for their iniquity” (Psalm 106:43).

When the prodigal son had spent all his money on wine, women, and song, he found his fair-weather friends had somewhere else to be (Luke 15:13-14). He soon found himself at the lowest point in his life—a pig farmer! To a Jew, there was hardly a lower job. To top it off, he was so hungry he wanted to eat the pig’s food, but he could not. He is a picture of those who do not know Christ and His gospel. Speak a saving word to your friends in low places (Mark 16:15).

I’ve Got Friends in the Low Place of Backsliding.

When Jonah rebelled against God he went down to Joppa, down into the ship, down into the ocean, and then down into the belly of the fish (Jonah 1:3, Jonah 1:15-17). As with Jonah, all backsliders sink lower and lower as they move away from God.

When someone falls down, they need a helping hand to lift them. So it is with our friends who have forsaken Christ. Why not give them a helping hand and an encouraging word? (Galatians 6:1-2). The Scripture also says we are to reprove with our exhorting (2 Timothy 4:2). Paul said that he warned every man in order to present him acceptable to Christ (Colossians 1:28). He “exhorted and comforted and charged every one of you, as a father doth his children, that ye would walk worthy of God” (1 Thessalonians 2:11-12). Jesus said it even better: “As many as I love, I rebuke and chasten: be zealous therefore, and repent” (Revelation 3:19). Speak a reproving word to these friends in low places.

I’ve Got Friends in the Low Place of Discouragement.

Do you know any whose secret prayer might sound like David’s “attend unto my cry; for I am bought very low”? (Psalm 142:6). Many around us may “paint on a happy face in the morning,” but if the truth were known “they are . . . brought low through oppression, affliction, and sorrow” (Psalm 107:39).

We need to turn sad eyes to Calvary and Christ. “The Lord preserveth the simple: I was brought low, and he helped me” (Psalm 116:6). “Mind not high things, but condescend to men of low estate” (Romans 12:16). William Arthur Ward said, “Flatter me, and I may not believe you. Criticize me, and I may not like you. Ignore me, and I may not forgive you. Encourage me, and I will not forget you.”[popover title=”Source” title_bg_color=”” content=”http://thinkexist.com/” content_bg_color=”” bordercolor=”” textcolor=”” trigger=”hover” placement=”” class=”” id=””]*[/popover]

Because of your strong faith I kept the track
Whose sharp-set stones my strength had well-nigh spent.
I could not meet your eyes if I turned back;
So on I went.
Because you would not yield belief in me
The threatening crags that rose my way to bar,
I conquered inch by crumbling inch—to see the goal afar— Because of you![popover title=”Source” title_bg_color=”” content=”Wendell Winkler, The Mission of the Local Church.” content_bg_color=”” bordercolor=”” textcolor=”” trigger=”hover” placement=”” class=”” id=””]*[/popover]

Barnabas had perhaps the best nickname in the entire early church. They called him, “Encourager”—“son of consolation” (Acts 4:36). God is still saying, “Encourage him” (Deuteronomy 1:38) and, “Exhort one another” (Hebrews 3:13). He gives us plenty of reasons to be full of courage. Clyde Gordon, who was completely paralyzed from his neck down, edited a magazine called The Triumph. In it he said:

Christ is no security against storms,
But He is perfect security in storms.
He does not promise an easy passage,
But He does guarantee a safe landing.[popover title=”Source” title_bg_color=”” content=”Curtis Hutson, Great Preaching on Comfort: Volume XVI” content_bg_color=”” bordercolor=”” textcolor=”” trigger=”hover” placement=”” class=”” id=””]*[/popover]

Speak an encouraging word. It can make all the difference to friends in low places.

I’ve Got Friends on the Road to the Low Place of Hell.

The majority is traveling the road whose signs read, DANGER AHEAD. Its lanes are all downhill. The rich man had to lift up his eyes to see Abraham’s bosom (Luke 16:23). It is a bottomless pit into which sinners are cast (Revelation 20:3). If our friends could see that the path they travel plunges into the abyss, maybe they would change. Speak a sobering word to your friends on the road to low places.

Wendell Winkler relates how some men are stronger in this point, while others may be better at another. Consider:

“There are people who have power to preach, great power to reason and convince, but are deficient in the power to exhort. Alexander Campbell was a marvelous man when it came to the ability to preach and convince people, but he did not have the power of exhortation that John T. Johnson had. John T. Johnson was in a meeting in which he had preached a very convincing sermon and then followed it with one of his stirring exhortations. A number of people responded to the gospel invitation; and then he exhorted a little more and some more responded; and when he was ready to start his third exhortation, one of the elders spoke up and said, ‘Brother Johnson, there’s no use saying anything more; there is not another sinner left in the audience.’”[popover title=”Source” title_bg_color=”” content=”The Mission of the Local Church.” content_bg_color=”” bordercolor=”” textcolor=”” trigger=”hover” placement=”” class=”” id=””]*[/popover]

Paul had a way of summing things in a few words: “Now we exhort you, brethren, warn them that are unruly, comfort the feebleminded, support the weak, be patient toward all men” (1 Thessalonians 5:14).—Thanks to Keith Mosher, Sr. for the idea.