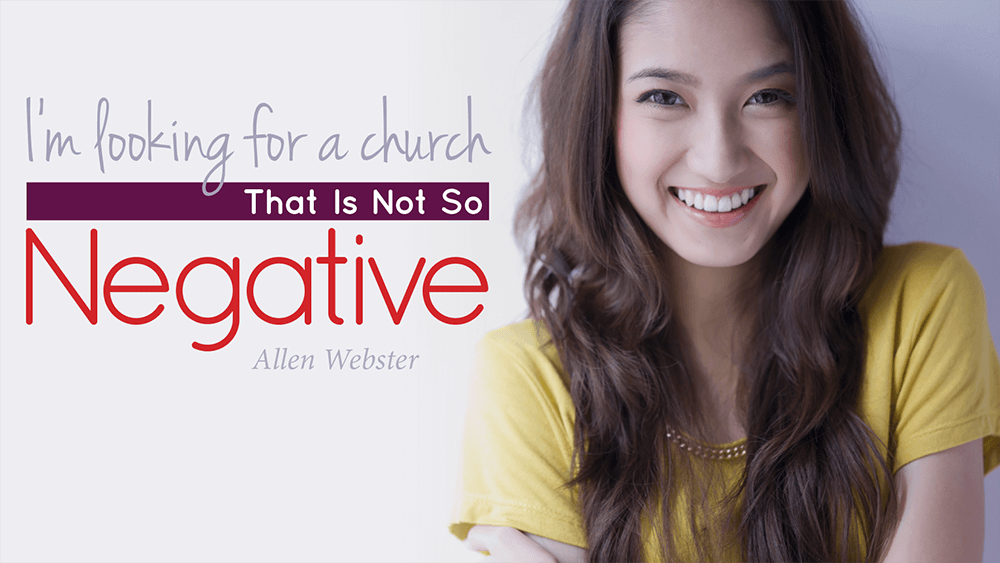 There is a lot of negativity in our world. The daily news cycle feeds on the scandals, crimes, and suffering dredged up from across the world. The dog-eat-dog business world wears a person down. Bills pile up, health declines. Our sports, political, religious, and entertainment heroes sometimes disappoint us. Everybody works with a “Negative Nancy” or knows a “Debbie Downer,” and a few people live with a “Glass-Half-Empty Gary.”

Is it any wonder people are looking for a positive message on Sundays? The church is the right place to look.

At the core, the New Testament church proclaims good news, a message that brings hope, help, strength, and joy. The gospel is, by definition, “good news” (euangelion, 1 Corinthians 15:1–4). God instructed His ministers to “exhort” His people (2 Timothy 4:2), which literally means “to call to one’s side for a word of encouragement.”

God wants people to possess hope, peace, acceptance, and courage. While the negative is useful, it is rarely helpful to leave that as the last word. To quote William Clark upon finally seeing the Pacific Ocean,1  “Oh the joy” of serving God!

To tired people, Jesus says, “Come unto me, all ye that labour and are heavy laden, and I will give you rest” (Matthew 11:28).

To those burdened by sin and life’s hardships, He promises, “Take my yoke upon you, and learn of me; for I am meek and lowly in heart: and ye shall find rest unto your souls. For my yoke is easy, and my burden is light” (Matthew 11:28–30).

To those who are troubled, we have a good word: “To you who are troubled rest with us, when the Lord Jesus shall be revealed from heaven with his mighty angels . . . when he shall come to be glorified in his saints, and to be admired in all them that believe (because our testimony among you was believed) in that day” (2 Thessalonians 1:7–10).

Those who feel guilty hear, “There is therefore now no condemnation to them which are in Christ Jesus, who walk not after the flesh, but after the Spirit” (Romans 8:1; cf. John 5:24).

Those who fear death are assured, “the trumpet shall sound, and the dead shall be raised incorruptible, and we shall be changed. For this corruptible must put on incorruption, and this mortal must put on immortality . . . then shall be brought to pass the saying that is written, Death is swallowed up in victory. O death, where is thy sting? O grave, where is thy victory? The sting of death is sin; and the strength of sin is the law. But thanks be to God, which giveth us the victory through our Lord Jesus Christ” (1 Corinthians 15:52–57).

To those who fear that God has abandoned them, the message is, “I have been young, and now am old; yet have I not seen the righteous forsaken, nor his seed begging bread. He is ever merciful . . . For the Lord loveth judgment, and forsaketh not his saints; they are preserved for ever” (Psalm 37:25–28). To those who feel that God is angry with them, there is a comforting word: “Therefore being justified by faith, we have peace with God through our Lord Jesus Christ” (Romans 5:1).

To those who feel God is inaccessible, we say, “By whom also we have access by faith into this grace wherein we stand, and rejoice in hope of the glory of God” (Romans 5:2).

Yes, the gospel is good news!

All men have sins and struggles, addictions and habits, mistakes and regrets (1 John 5:19). They long to rise above and be set free. This classic negative-to-positive form of gospel preaching connects with people. It first shows the sin of man and then follows with the solution of Christ.

There is a land of beginning again. If Jesus were on earth today, He would still offer hope to sinners. He is not, but His church is. It speaks for Him to the hopeless in our communities, saying, “You can start over.” It speaks to those faithful Christians who doubt their salvation and eternal reward, explaining that they have reason to be filled with hope. Preachers are modern day “Barnabases.” Barnabas was nicknamed brother “Encouragement” (cf. Acts 4:36), and we can hardly picture him without a smile on his face. What would it have been like to hear Barnabas preach? “Go, and do thou likewise.”

Two brothers lived on adjoining farms for nearly forty years. After farming side by side, sharing machinery, and trading labor and goods as needed without a hitch, the long collaboration fell apart. It began with a small misunderstanding, grew into a major conflict, and exploded into bitter words followed by silence.

One morning there was a knock on the older brother’s door. John opened it to find a man with a carpenter’s toolbox. “I’m looking for work,” he said. “Do you have any small jobs I could do?”

“Yes,” said John, “I do have a job for you. Look across the creek at that farm. That’s my younger brother’s. Last week there was a meadow between us, but he took his bulldozer to the river levee and now there is a creek between us. He did it to spite me, but I’ll go him one better. See that pile of lumber by the barn? I want you to build a fence—an eight-foot fence—so I won’t need to see his place or his face anymore.”

The carpenter replied, “I think I understand. Show me the nails and the post hole digger and I’ll do a job that pleases you.” John got the materials and left for the day. The carpenter worked hard all day measuring, sawing, and nailing. About sunset John returned, just as the carpenter finished. John’s eyes opened wide and his jaw dropped, for there was no fence at all. Instead there was a bridge stretching from one side of the creek to the other!

Just then his brother, Sam, was coming across the bridge with his hand outstretched. “You are quite a man to build this bridge after all I’ve said and done.” The two brothers met in the middle of the bridge, taking each other’s hand. They talked and talked.

Finally, they noticed the carpenter hoist his box. “No, wait!” said John. “Stay a few days. I have other projects for you.”

“I’d love to stay on,” the carpenter said, “but I have many more bridges to build.” Like him, the church has many bridges left to build and lives to change for the better.

The church shows how to live a meaningful life

The world is shallow; its diversions are void of long-term meaning. Life is short and people want to understand how to best use their days to make a lasting difference. They don’t want to be pulled down into the selfish, dark life that they see in our culture.

National Geographic wrote of a spider that lives in water but is not a part of water. It creates a bubble house under water with an air tube that runs to the surface. That’s how Christians live—in the world, but not of the world, and with a connection to heaven.

1 On the Lewis and Clark Corps of Discovery Journey (or at least what he thought was the Pacific).