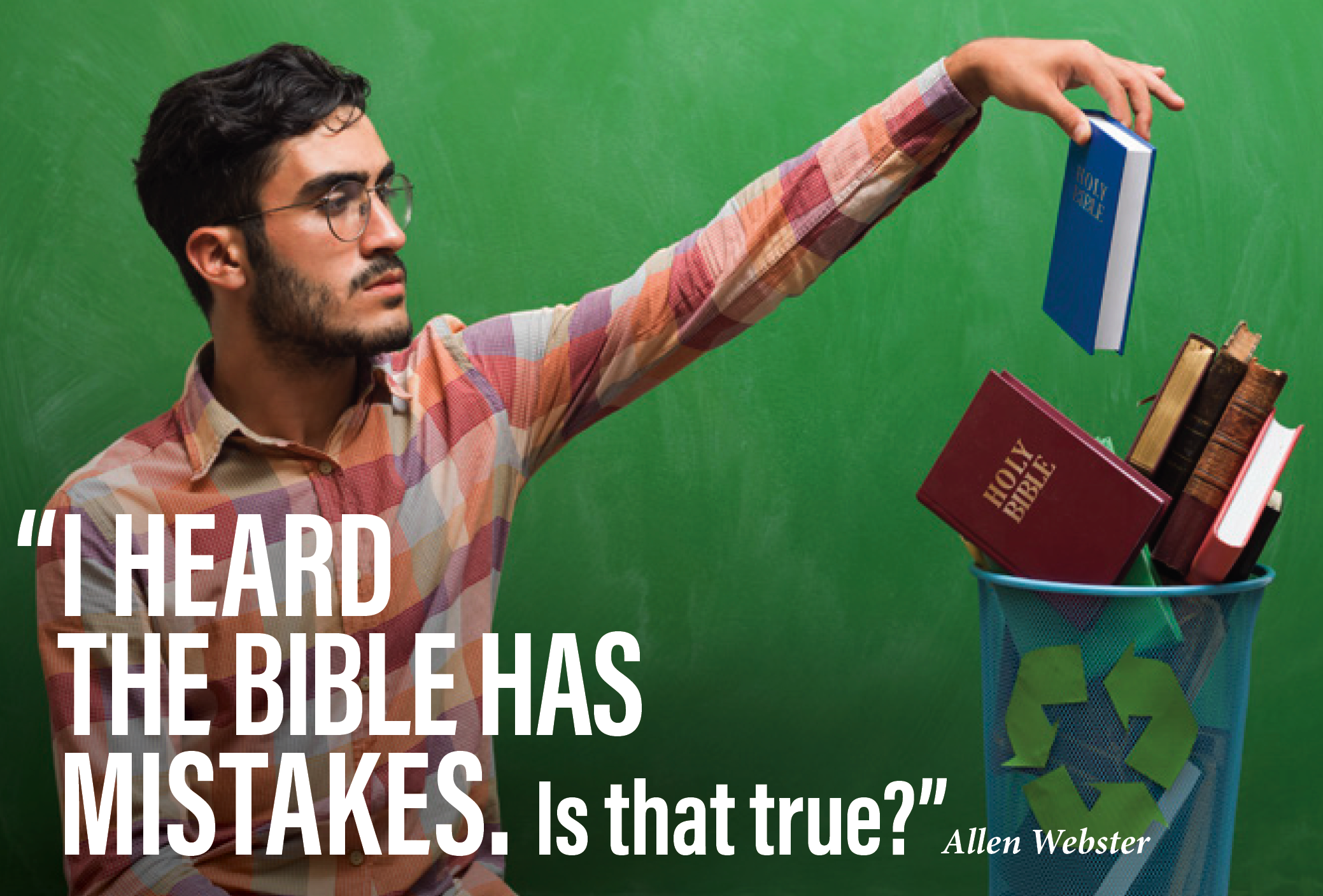 Home Bible Study “I Heard the Bible Has Mistakes. Is that true?”

One said, “If I were Satan, I would put as many barriers around the Bible as I could. I would plant thorns and hedges to frighten people off.”

The devil has been busy planting thorns (cf. Matthew 13:18–22). A Gallup poll showed that only twenty-four percent of Americans believe the Bible is the literal word of God, the lowest in Gallup’s forty-year tracking. The number who view the Bible as secular stories and history has risen to twenty-six percent.

Whole books—even libraries—are dedicated to answering critics verse by verse. This article can give only a sampling. Critics allege over one hundred errors in Matthew, Mark, Luke, and John. All their accusations are answerable. These examples show how to deal with such discrepancies.

A comparison of Jesus’ genealogies (Matthew 1:1–17; Luke 3:23–38) shows more dissimilarity than duplication. Matthew’s list descends from Abraham to Joseph (Matthew 1:2, 16) because he wrote to Jews, and Abraham was the father of the Jews. Luke’s ascends back to Adam (Luke 3:38), focusing on humanity because he wrote to the Greeks.

There is no difficulty reconciling the first two parts:

From David to Christ, though, the lists are different, and Luke has more names. Matthew divides forty-two names into three sets of fourteen (each ending in a national event). Luke’s list has sixty ancestors.

Did the centurion come or not?

Matthew stated a centurion came to Jesus, pleading with Him to heal his servant (8:5–10). Luke said the centurion sent Jewish elders on his behalf (7:1–10).

Did Jesus make a whale of a mistake?

Since a whale is a mammal, when Jesus called Jonah’s fish a whale (Matthew 12:40 kjv), He made His “most famous scientific error.”

Answer: Neither Jonah nor Jesus spoke English and did not use the word whale or fish. Regardless of English translations, the meaning of Jonah’s Hebrew word and Jesus’ Greek word is the same (a giant sea creature).

What about those eyes and needles?

Did you hear the one about the three blind men?

Six hours one Friday, or was it nine?

Mark wrote Jesus was crucified the third hour (15:25); John said He was tried the sixth hour (19:14). How could His trial be after His crucifixion?

What did that centurion say?

He likely said both. Critics assume each book is a complete biography and that any omission is a contradiction. These are not complete biographies. Each writer limited the days, events, and words he revealed of Jesus. Combined, they contain events from only about 35 of Jesus’ 1,200 ministry days.

Matthew wrote, “Then was fulfilled what had been spoken by Jeremiah the prophet, saying, ‘And they took the thirty pieces of silver’” (27:9–10). This reference is found in Zechariah 11:13.

A Jew would see nothing strange here due to their Old Testament canon. They grouped the prophets together with Jeremiah first (cf. Matthew 22:40). Jewish scholar Nahum Sarna explained: “In the Jewish way of labeling things you call a book by its first few words, and you call a collection of books by the first book in that collection” (source).

Doubtless, one thief had a change of heart.

Was it one angel outside the tomb or two angels inside? Or two men inside? Or one man inside?

Answer: Multiple partial reports with different details do not have to be false. Courts expect truthful witnesses to give varying details. Police say when two completely agree, the testimony is either contaminated or rehearsed.

Put the accounts together, and an angel moved the stone and sat upon it outside the tomb (Matthew 28:2). Inside the tomb were two men (angels) (Luke 24:4; John 20:12); perhaps one was the same angel, as it seems to have been a different time. Mark never said there was only one angel. He could have referred to the one who spoke of Jesus going to Galilee.

The entirety of God’s Word is truth (Psalm 119:160). Parallel passages are complementary and more valuable than identical records. Piecing them together answers many supposed discrepancies in Jesus’ biographies and parallel Old Testament histories (Kings/Chronicles).

Critics often strain at gnats and use unfair methodology. Would you want such illogical people on a jury to decide your case? Still, the Bible is not hurt by criticism. Jesus’ biographies have been tried in the fire of controversy and proven accurate. Christians grow in faith by studying for answers and gain a more complete picture of Jesus’ life and teachings.

Get past the thorns.

In Pursuit of Hope