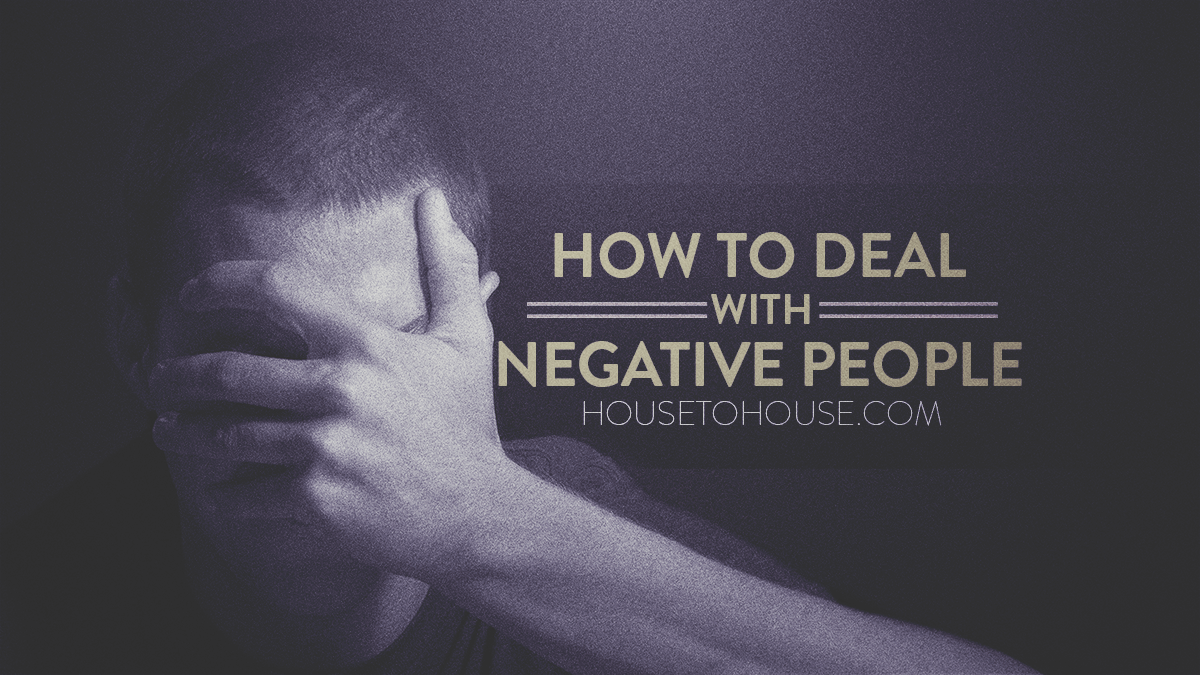 Home Christianity How to Deal with Negative People

A small percentage of people just cannot be pleased, no matter what we do. Len Sweet wrote:

The wife of a hard-to-please husband was determined to satisfy him for his just one day. “Darling,” she asked, “What would you like for breakfast this morning?” He growled, “Coffee and toast, grits and sausage, and two eggs—one scrambled and one fried.” She soon had the food on the table and waited for a word of praise. After a quick glance at his plate, he exclaimed, “Well, if you didn’t scramble the wrong egg!”

How do we deal with the criticisms of negative people?

It is impossible to avoid negative, critical people completely. Jesus said to His disciples, “It is impossible but that offences will come” (Luke 17:1). It will happen, but how will we deal with it? The word “offense” (skandalon from which we get “scandal”) literally means “the movable stick or trigger of a trap.”

Offensive, discouraging words are a trap into which we must not fall. In many cases, it is best to practice selective hearing. Solomon said, “Take no heed unto all words that are spoken; lest thou hear thy servant curse thee” (Ecclesiastes 7:21). Solomon also counselled his son to “consent not” when sinners enticed him (Proverbs 1:10). When enticed by criticism to give up, or fight back, just tune it out and stay focused on your work.

When negative people plant negative words into your mind be mentally stronger than your critics. “Be strong” (1 Corinthians 16:13).What we say about ourselves supersedes anything anyone says about us. Solomon said, “For as he thinketh in his heart, so is he” (Proverbs 23:7). Criticism will not kill us. If criticism had any real power to harm, the skunk and the mosquito would be extinct by now. Persecution might kill us, but even that cannot touch our souls to do permanent damage (Matthew 10:28).

I watched them tearing a building down,
A gang of men in a busy town;
With a ho-heave-ho and a lusty yell
They swung a beam, a side wall fell.

I asked the foreman, “Are these men skilled
As the men you’d hire if you had to build?”
He gave a laugh and said, “No indeed!
Just common labor is all I need;

I can easily wreck in a day or two
What builders have taken a year to do.”
I thought to myself as I went my way,
Which of these roles have I tried to play?

Am I a builder who works with care,
Measuring life by the rule and square?
Am I shaping my deeds to a well laid plan,
Patiently doing the best I can?

Or am I a wrecker who walks the town
Content with the labor of tearing down?2

Ask yourself, “Am I willing to carry the cross of criticism for Christ’s sake?” (cf. Luke 9:23). Jesus is our example. The Bible says of Him, “Looking unto Jesus the author and finisher of our faith; who for the joy that was set before him endured the cross, despising the shame, and is set down at the right hand of the throne of God” (Hebrews 12:2). Harry Truman, who received intense criticism during his presidency, put it this way: “If you can’t stand the heat, you’d better get out of the kitchen.”

Peter teaches us to look at it from both perspectives:

And who is he that will harm you, if ye be followers of that which is good? But and if ye suffer for righteousness’ sake, happy are ye: and be not afraid of their terror, neither be troubled; but sanctify the Lord God in your hearts: and be ready always to give an answer to every man that asketh you a reason of the hope that is in you with meekness and fear: having a good conscience; that, whereas they speak evil of you, as of evildoers, they may be ashamed that falsely accuse your good conversation in Christ (1 Peter 3:13–16).

Don’t let a thoughtless remark ruin a whole day or week. Do not let it destroy peace of mind, lead to division and strife, or create scorn and vindictiveness. Deal with it properly so it does not impair normal body functions, thought processes, and performance.

An average person’s anxiety is focused on:

Use criticism for motivation. Answer critics with accomplishments. Prove criticism wrong. When a New York Times reporter informed Colonel William Gorgas, who was heading up the construction of the Panama Canal, of critics back home, the colonel said nothing. Eventually the reporter asked, “Aren’t you going to answer your critics?”

Time passed and finally the reporter asked, “How?”

The colonel smiled and said, “With the canal.” His answer came loud and clear on August 15, 1914, when the Panama Canal opened to traffic for the first time.

Jesus said, “Nothing shall be impossible unto you” (Matthew 17:20; cf. Philippians 4:13). Critics have very often been wrong.

Someone said, “If you are a Christian, you can expect folks to criticize, but you ought to live so nobody will believe them.” Answer criticism with deeds. Criticism can be one of the “all things” that works together for good to those who love God (Romans 8:28).

When criticized, remember you are in good company. Look at God’s great preachers:

Many of the greatest modern men were also criticized. Lincoln’s Gettysburg Address, delivered in November 1863 at the Civil War battlefield, is now regarded as one of the greatest speeches ever made. However, the critics of Lincoln’s day did not like it:

The nearby Harrisburg (PA) Patriot and Union wrote, “We pass over the silly remarks of the President. For the credit of the nation we are willing that the veil of oblivion shall be dropped over them and they shall no more be repeated or thought of.” The Chicago Times, in Lincoln’s home state, wrote, “The cheek of every American must tingle with shame as he reads the silly, flat and dishwatery utterances of the man who has to be pointed out to intelligent foreigners as the President of the United States.”The London Times joined in: “The ceremony was rendered ludicrous by some of the sallies of that poor President Lincoln. Anything more dull and commonplace it would not be easy to produce.”7

Make a friend of your critic. Our critics, in a way, are our friends. A constructive criticism is a genuine compliment. The person offering it is often uncomfortable doing so, but is willing to endure discomfort to help us. He runs the risk of arousing enmity, but cares enough for our welfare to take the chance.8 Instead of justifying, excusing, or rationalizing an error, we should try to benefit from the criticism. This will strengthen the bond with a person who cares enough to correct in love.

Further, even a negative criticism at least says that someone noticed us. It seems the more a person climbs in achievement or maintains righteous conduct, the more disposed others are to degrade him. A football coach gave this advice on how to deal with failures. “When you’re about to be run out of town, get out in front and make it look like you’re heading a parade.”9

And so it criticized each flower,
This supercilious seed,
Until it woke one summer hour
And found itself a weed.

One small community decided to form an orchestra. The whole town was present for the first performance of Beethoven’s Fifth Symphony. The local newspaper critic was there and the brief review in the paper the next morning simply read, “Last evening, the local symphony played Beethoven. Beethoven lost.”

Seek to understand why the person is critical.

Some were reared in negative environments. They received unintentional negative programming10 by constantly hearing such things as:

Children growing up in average households hear “no” (or are told what they cannot do) more than 148,000 times by the time they reach age 18. A group of mothers was asked to track how many times they made negative, compared with positive, comments to their children. They found that they criticized ten times for every time they complimented.11 Parents must remember that the Bible says we are to bring up our children both in the nurture and admonition of the Lord (Ephesians 6:4), and that we are not to discourage them (Colossians 3:21).

Others have been constantly put down by their peers, teachers, and bosses. They hear discouraging words all the time. A three-year survey in one city’s schools found that the teachers were 75 percent negative. The same study indicated that it takes four positive statements to offset the effects of one negative statement. One small community decided to form an orchestra. The whole town was present for the first performance of Beethoven’s Fifth Symphony. The local newspaper critic was there, and the brief review in the paper the next morning simply read, “Last evening, the local symphony played Beethoven. Beethoven lost.”

Because of such criticisms, many people go through life doubting themselves. They see themselves as future failures. They stop chasing their dreams. David faced negativity in his youth. At every turn, it seems, people were negative.

How did David handle it? With his brother, he simply tuned him out, turned away to someone else, and brought up the same matter (1 Samuel 17:30). With Saul, he reasoned with him and then showed what he could do. He said, “The Lord, who delivered me from the paw of the lion and from the paw of the bear, He will deliver me from the hand of this Philistine” (1 Samuel 17:37 nkjv). Your family and friends may not understand, but don’t let that stop you.

Don’t overreact to the point that a bridge is burned.

Love your enemies (Matthew 5:44). Bless when cursed. Look for an opportunity to do something good for the person. Pray for those who criticize. The Bible speaks much of pursuing the path of peace:

Let the other person win. How do we deal with someone who always has to be right or always wants his way? Jesus said, “Whosoever shall compel thee to go a mile, go with him twain” (Matthew 5:41). We show wisdom, not weakness, when we yield. Abraham showed he was the bigger man when he let Lot have first pick of pastureland (Genesis 13).

See yourself as a favored child of God.

The best way to combat negative words is to know that God wants us to succeed and will help us. The devil cannot beat us (James 4:8). The psalmist said that what the godly man does will be blest (Psalm 1:1–3). That does not mean we will never have setbacks, but that ultimately we will prevail. God desires things to be well with us (Psalm 128:2). Paul wrote, “In all these things we are more than conquerors through him that loved us” (Romans 8:37). God says that we can do all things that He wants us to do (Philippians 4:13).

LEARN HOW TO SEND HTH TO YOUR COMMUNITY