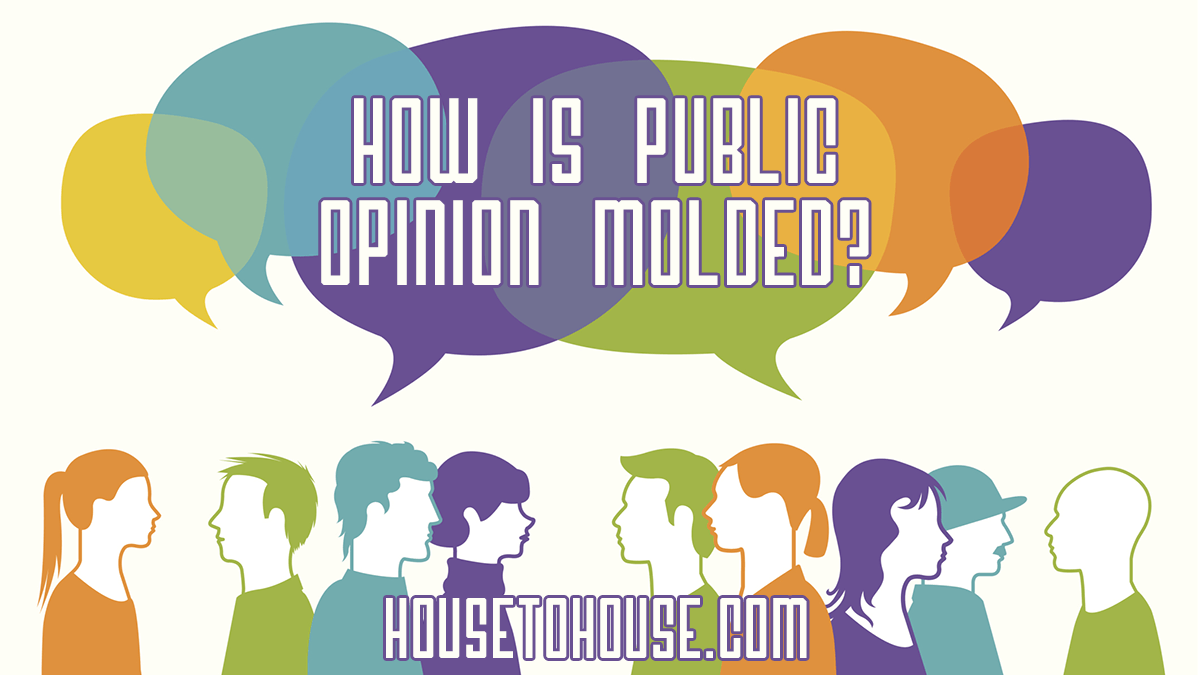 The term “public opinion” dates to the seventeenth century. In An Essay Concerning Human Understanding, John Locke wrote of the importance of public opinion in politics. Among the Founding Fathers, James Madison recognized that for a government to be democratic, it required citizens that held educated opinions they could share and express.

Stages of forming public opinion include the following:

Public opinion now starts with agenda setting by the world’s major media outlets. They decide which stories are newsworthy, and how and when to report them.

Mass media utilizes advertising techniques, such as framing, to change minds. Framing is portraying a story in a way that sways opinion in one direction. Symbols—combinations of words, personalities, music, and drama—are important in framing as they arouse imagination and cause individuals to respond in predictable ways (Wikipedia).

Modern public opinion on morality changed steadily over the last seventy years. It began in 1947, when the Supreme Court decided in Everson v. Board of Education that the First Amendment instituted a “wall of separation” between church and state. A wall of atheism around public schools where God is not to be mentioned was the result but was not what Jefferson envisioned. In early America, the Bible was used as a textbook to teach morality. Noah Webster’s Primer taught children to spell with Bible verses. In the book’s front, Webster’s picture had the inscription, “Who taught millions to read but not one to sin.”

Reduce the cultural and social significance of religion.

Sixty-six percent believe religion is “losing its influence on American life.” (source) Although 95 percent believe in God, only 56 percent say religion is very important in their lives. As mosques are raised, churches are vacated. Mainline Protestant denominations (who dimmed their bulbs the last fifty years to remain relevant to culture), are rapidly closing. They dropped from 50 percent “market share” in 1958 to 14 percent in 2015.

In 1972, only 7 percent of adults had no religious affiliation. Now nearly a fifth—and 32 percent under 30—have none. Nearly 60 percent of those who identify as “Christians” age 15 to 29 are not active in any church. Of those who attend regularly, a Gallup study showed a severe “gap between belief and commitment, between high religiosity and low ethics.” Most women who get abortions claim to be Christians (Protestants: 42 percent; Catholics: 27 percent [source]). Only 31 percent pray daily, and few say a prayer before meals. Only a small percentage read the Bible daily or know much about the Bible.

True religion touches the heart and life (Matthew 15:9; cf. Romans 12:1), and true worship is “in spirit and in truth” (John 4:24). The Bible warns against vain repetition (Matthew 6:7) and of having a form of godliness, but denying the power thereof (2 Timothy 3:5).

In its void, put raunchy entertainment.

With Christianity’s influence weakened, Satan moved to fill the void with unrighteous thinking and behavior. Just as we can tell much about a person by what he finds entertaining, we can judge a lot about a society by its media.

Today, TV is a great moral wasteland. Plots commonly present premarital, extramarital, and perverted sex as normal. Homosexuality, drugs, and abortion are given favorable treatments while “Christians” are presented unsympathetically. Violence and gore push the envelope. Modesty is a forgotten virtue, and nakedness is expected and exploited. Cursing and coarse language are freely sprinkled in—even in primetime when children watch.

As Christians, what can we do to correct this moral decline?

There are many things we might do to help America, but the most important thing is simply to be “salty.” Jesus said, “Ye are the salt of the earth” (Matthew 5:13). Salt had a variety of uses then, as now, but it was primarily a preservative. They had no canning or freezers; meat had to be eaten soon or cured with salt. Christians preserve society and must not become like the world and lose their savor. Each needs to contribute to the righteous climate of the nation which God considers before sending destruction (cf. Genesis 18:20).

There is more power in prayer than in Congress. Paul exhorted “that, first of all, supplications, prayers, intercessions, and giving of thanks, be made for all men; for kings, and for all that are in authority; that we may lead a quiet and peaceable life in all godliness and honesty” (1 Timothy 2:1–2).

Jesus said, “Go ye into all the world, and preach the gospel to every creature” (Mark 16:15). Fixing moral decay is more difficult than switching political parties. Nations change as citizens change. Citizens change as hearts change. Hearts change by conversion. Conversion comes by preaching (Acts 3:19; 2 Timothy. 4:1–2). We must stand in the way and call the wicked back to the right path (Jeremiah 6:16; Jude 1:3). Liberalism can only win in the absence of absolute truth, so we must let our voices be heard (Psalm 107:2). Eternal Scripture declares, “The wicked shall be turned into hell, and all the nations that forget God” (Psalm 9:17). Since Scripture is unbreakable (John 10:35), this principle is as true now as it was when the ink was wet three thousand years ago. When wickedness continues in hardened defiance to His will, God terminates prosperity and lets the nation fall to its enemies.