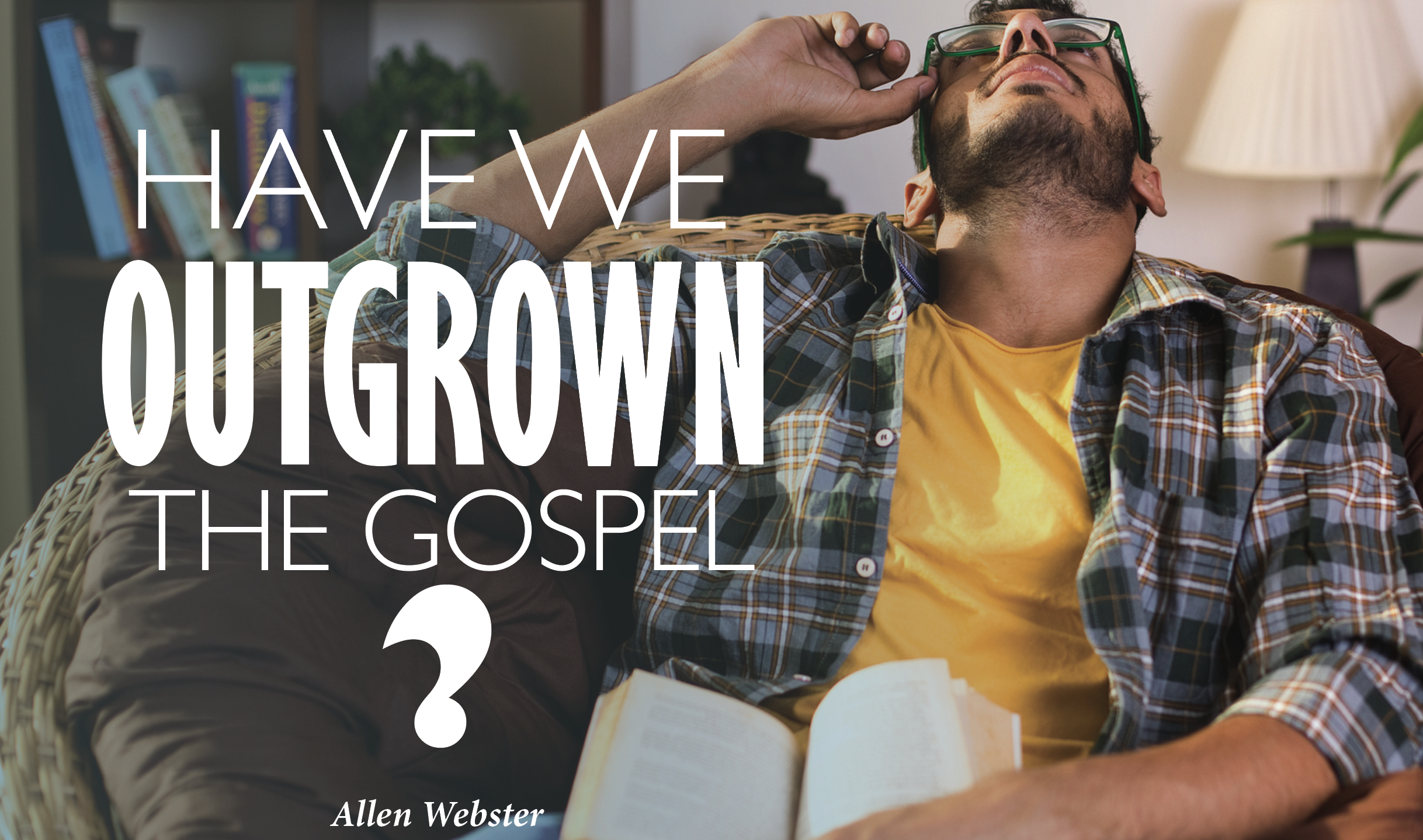 Home Bible Study Have We Outgrown the Bible?

Times change. Today’s “new” is tomorrow’s “old,” this morning’s “breakthrough” is this afternoon’s “castaway,” and this year’s “popular” is lost in next year’s “latest.” Clearly, the “up-to-date” is soon “out-of-date.”

Truth, however, doesn’t change. It reads the same today as yesterday and as it will tomorrow. It was “once for all delivered to the saints” (Jude 1:3).

Some feel they have outgrown the ancient Gospel. Its absolute standard is, to them, obsolete. The concepts of sin and spiritual death are replaced by the exaltation of self and sensuality. The idea of self-denial now to gain heaven later is given a passing thought—and then passed on. Bible concepts—power in the blood, a virgin-born, sinless, sacrificial, miraculously resurrected Savior—are but myths of a bygone era.

Children of the postmodern age have “grown-up.” They don’t need the gospel anymore. Or do they? Has man outgrown the gospel?

NOT UNLESS HE HAS FOUND ANOTHER FOOD FOR THE SOUL

Vegetables and fruits have been on kitchen tables since Eve prepared meals in the Garden, but no one is calling them outdated. Noah must have grilled the first T-bone just after the Flood. Several thousand years have passed, but steakhouses still do pretty well.

What nourishes the spirit? The gospel fills those who “hunger and thirst for righteousness” (Matthew 5:6). Baby Christians first take “the pure milk of the word” (1 Peter 2:2) and then progress until they can eat solid food at God’s table (Hebrews 5:12–14). No one has found a substitute for God’s soul food.

Medical treatments have been around at least since Moses, but nobody’s in a hurry to close hospitals and pharmacies. A cure for sin (forgiveness) is still man’s most basic spiritual need (Romans 3:23, 6:23). We all have ancient Israel’s contagion: “From the sole of the foot even to the head, there is no soundness in it, but wounds and bruises and putrefying sores; they have not been closed or bound up, or soothed with ointment” (Isaiah 1:6). The only antidote for sin has “gospel” on the label (Romans 1:16).

Look around—if anything, sin has greater influence now than it did with ancient man. Violence, greed, lust, selfishness, drunkenness, and drugs are rampant. No society—yea, no individual—has mastered sin. Paul would say today what he said in circa ad 57: “All have sinned and fall short of the glory of God” (Romans 3:23). Mankind has not conquered carnal desires. We are still prone to give in to “the lust of the flesh, the lust of the eyes, and the pride of life” (1 John 2:15–17). We cannot overcome without the power of the written Word (Hebrews 4:12). Jesus used its power to defeat Satan in the showdown in the desert (Matthew 4:1–11). Paul urged Timothy to make a good warfare by it (1 Timothy 1:18); and we can beat our adversary only with the same time-tested weapon (Ephesians 6:17).

Since the eternal God is the One who determines what sin is, sin does not change from culture to culture or with the passing winds of time. Men may change what they consider sin or what they call it (Isaiah 5:20), but that will not alter reality. Sin is still transgressing God’s law (1 John 2:4), violating one’s conscience (Romans 14:23), omitting a duty (James 4:17), and, in general, “all unrighteousness” (1 John 5:17). We’ve all done it; thus we all need the cure that only the gospel can give.

NOT UNLESS HE HAS UNEARTHED ANOTHER MAP TO HEAVEN

This world is not all there is. It is but the prelude to the main performance, the foreword to a great book, and the gestation period to endless life. Jesus used another figure: it is a short trip to an everlasting home. He plainly mapped out the road that leads to life (Matthew 7:14). He stated the conditions by which man can achieve salvation. He must believe in Christ (Mark 16:16), change his sinful life (repent, Luke 13:5), confess Christ’s name (Romans 10:9–10) and be immersed for the forgiveness of sins (Acts 2:38; Romans 6:4).

Some have tried to invent their own ways to heaven, but their maps will only get a person lost. If we follow Faith Only Lane or Works Avenue, or Direct Spirit Leading Way, or the popular path, Once Saved Always Saved, we are traveling the various lanes of the interstate Jesus called a broad “way that leads to destruction” (Matthew 7:13). Jesus is “the way, the truth, and the life”—and His way is only found in His Book (John 14:6).

NOT UNLESS HE HAS FOUND ANOTHER WEAPON SATAN FEARS

The old lion isn’t dead; he is still roaring and walking about “seeking whom he may devour” (1 Peter 5:8). The serpent is not hibernating; he still lurks to entice, entrap, and engulf the unsuspecting (Genesis 3:1–7; 2 Corinthians 11:3). Man is still in danger; therefore, he needs the one weapon that makes Satan cringe. Just as a lion does not fear a rock in the hand of a child, Satan does not fear man’s strength in man’s hand. However, he does fear God’s power in man’s hand (“it is written,” Matthew 4:1–11; James 4:7).

NOT UNLESS HE CAN MAKE HIS LIFE MEANINGFUL WITHOUT IT

The Bible is able to make us complete (2 Timothy 3:16–17). Its message fills the void found in every heart. It has the power to convert (change) a person. The gospel has power to transfer us from the power of darkness into the kingdom of the Son of His love (Colossians 1:13). In every case of conversion in the New Testament (see Acts), someone preached the Word, which produced a change in the hearers.

An airplane stewardess came down the aisle asking what each passenger wanted to drink. Several in a row said, “Make mine a martini.” Coming to the next seat, she noted a man with an open Bible. Somehow it seemed inappropriate to ask a Bible-reader if he desired a martini.

So she said, “Tomato juice, Sir?’ He later observed, “What other book could I have been reading that would change a martini into tomato juice?”

Those who change the gospel put themselves under God’s curse (Galatians 1:6–9) and will find that they will be judged by the gospel in its original form (Revelation 20:12). Those who choose to ignore it will find it was the one essential of their earthly pilgrimage (2 Thessalonians 1:8–9).

Let’s not cast away the only Book God ever wrote!