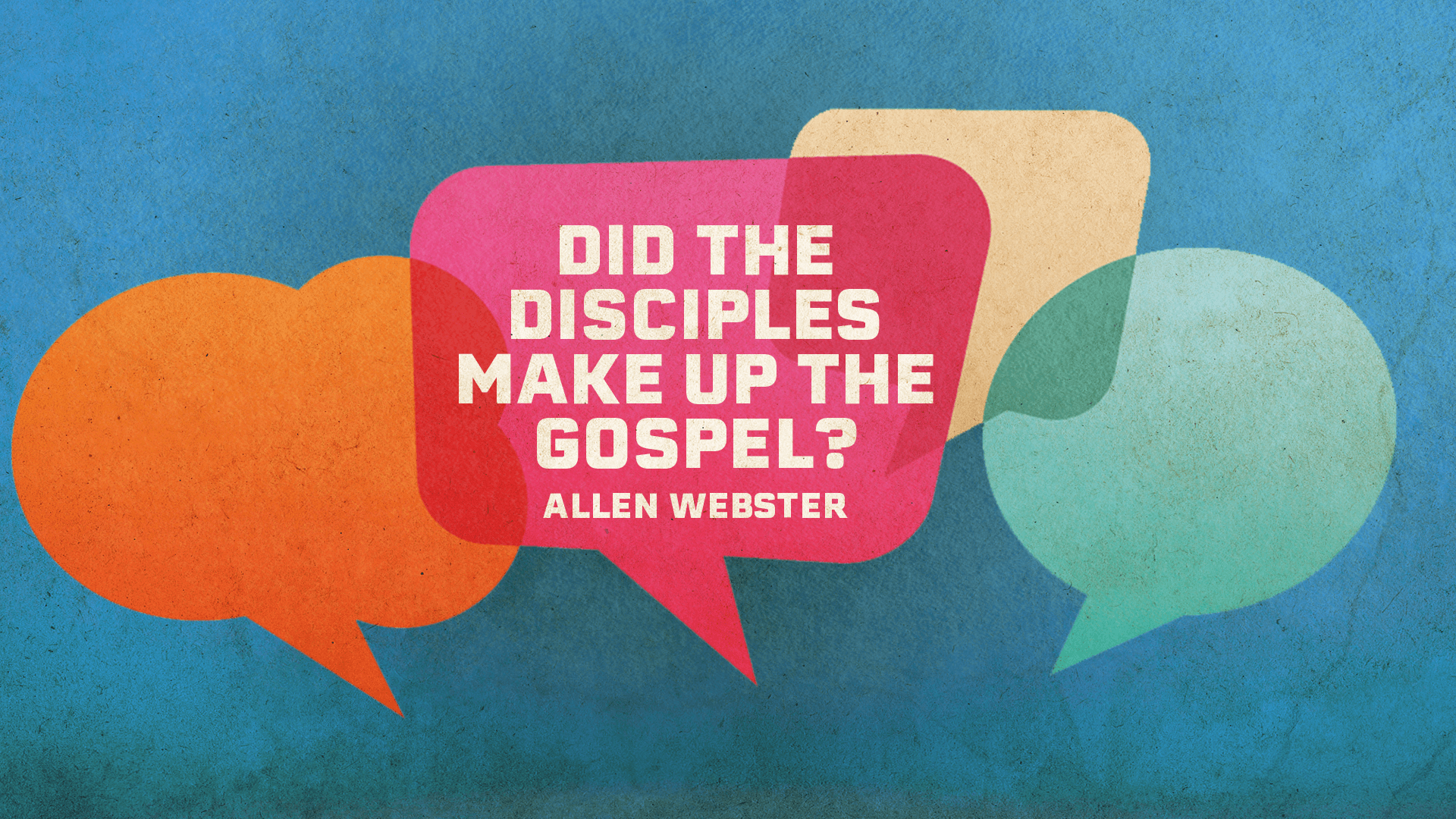 Home Bible Study Did the Disciples Make up the Gospel?

Opponents of Christianity commonly say that the New Testament resulted from the disciples missing Jesus so much that they made up the resurrection and fabricated a record of His words and deeds. Common acts of kindness became astounding miracles. Sermons were sprinkled with references to His coming from heaven and being the Son of God. A good life became a sinless life.

Those who say such things usually have not read the Bible; they simply parrot what they have heard or read from non-believers. Rarely have they studied carefully the details of Matthew, Mark, Luke, and John. The average church member knows far more of the Bible, but that does not mean that he or she is ready to meet the questions of a child or grandchild who has expressed doubts in the Bible (1 Peter 3:15).

A commonsense approach involves carefully examining the content of the gospel. The New Testament has the ring of authenticity. If the gospel story were fabricated, it would read differently. What internal factors show that the disciples did not invent the gospel?

The presence of unflattering material.

A rule historians use is this: If a document contains features which are embarrassing to those who wrote it, then it has a high probability of being historical (also referred to as the criterion of embarrassment).

The disciples did not change the story, even when it would have made them look better. Collectively, they wrote that as a group they were

Individually, Zebedee’s sons had their mother request exalted positions for them, which showed an embarrassing lack of maturity, a misunderstanding of the kingdom, and a violation of Jesus’ specific teaching (Matthew 20:20–23; cf. Mark 10:45; Luke 22:24–27). Peter insulted Jesus by putting Him on the level with Moses and Elijah (Matthew 17:4–5), denied Him three times (Matthew 26:69–75), and was called “Satan” by Jesus in the biography that he likely helped author, Mark (Mark 8:33). Thomas doubted (John 20:24–28).

Culturally, we find an odd occurrence. Women—not the disciples—were the first eyewitnesses of the empty tomb at a time when women were second class citizens and unable to testify in court.

The presence of counterproductive features.

The second rule of historians is this: If a document contains features which are counterproductive to the purpose for which it was written, then it has a high probability of being historical.

If the disciples were trying to convince the world that Jesus was the holy Son of God (cf. John 20:30–31), why include multiple accusations against Him that showed people denying that premise? Jesus Himself denied being good, if He were not God (Matthew 19:17). The biographies show Jesus being accused by both His family and His enemies, of being

If trying to gain followers for Jesus, why admit that many of His followers deserted Him (John 6:66), and that His own family opposed Him (Mark 3:21; John 7:5)?

If trying to impress people with His greatness, why include unflattering facts of Jesus’ life? Yet the writers admit His

It would have been far easier for the disciples to simply leave out these details; by including them the disciples show a commitment to truth.

Further, the disciples did not construct the new religion to appeal to a majority of proud, worldly-minded, sensual, and profane people. Jesus’ teachings were radical, and, to that culture, embarrassing. His views were unorthodox on

The presence of irrelevant material.

After Jesus was arrested, an unknown young man followed Him, wearing nothing but a linen cloth (Mark 14:43–52). When he was apprehended, he left the cloth behind and ran off naked. The young man is left unnamed. Why include this? It is not central to the storyline, but it is the kind of thing an eyewitness would remember. (Scholars believe the young man is the author of the book, which makes it relevant.)

After a crowd asked Jesus what should be done with an adulterous woman, Jesus wrote in the dirt like He was stalling for time (John 8:1–10). John does not say what He is writing. It is not even clear whether the writing is important or not. The only reason to include this is that it actually happened.

Some material in the Gospel Accounts was irrelevant to the issues facing the church during the time these books were thought to be written (ad50–90). Consider these incidents:

Why did the disciples include these? The most reasonable explanation is because Jesus said them.

The absence of relevant material.

Early Christians had a number of disputes. They disagreed about

When a question came up, the first practice was to see what Jesus said about it (cf. 1 Corinthians 7:6, 12, 25; 2 Corinthians 11:17). Yet Jesus did not preach any sermons about these issues in the four gospel accounts. If the disciples had fabricated the gospel, imagine how tempting it would have been to add a verse to settle these controversies.

Perhaps the most significant omission is the absence of statements from Paul. Imagine having a man who was well-educated, a good writer, recognized leader, and prominent preacher, yet not including his material in writing the gospel. T. W. Manson wrote the following:

The Pauline letters abound in utterances which could easily be transferred to Jesus and presented to the world as oracles of the Lord. How many are? None. It seems a little odd that, if the story of Jesus was the creation of the Christian community, no use should have been made of the admirable materials offered by one of the most able, active, and influential members of the community.[2]

The presence of unity, with differences.

When a false collaboration is planned, participants agree to the key points of their story. They give uniform answers. If multiple eyewitnesses describe a situation, and these significantly agree with one another—though varying in minor details—the case becomes even stronger (criterion of multiple attestations).[3]

The first thing that strikes one reading the Gospel Accounts is the exceedingly varied contents. These men are writing of the same life, so they cover the same events, but each gives different details. Although Mathew, Mark, and Luke are called the “synoptic gospels,” meaning “from the same view,” they still differ significantly. Alleged controversies are even argued (and answered).

Yet the whole agrees. The same conception of God; the same view of the Savior; the same general notions of right and wrong. They have been meticulously compared by friend and foe for centuries yet have been consistently found harmonious. How could each writer writing separately and each for his purpose, be taken together, and their writings form a well-adjusted whole?

[3]The criterion of multiple (or independent)attestation is a tool used by biblical scholars to determine whether certain actions or sayings by Jesus in the New Testament are from the “historical” Jesus.