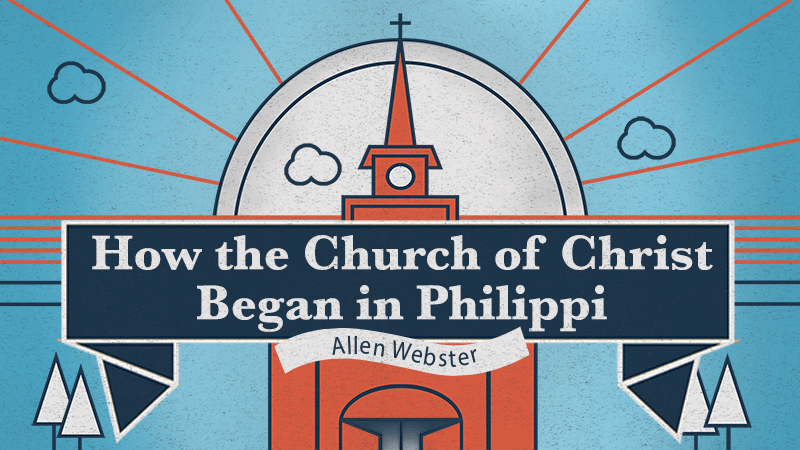 Home Editorial How the Church of Christ Began in Philippi

The church at Philippi began with Paul hearing the Macedonian call (Acts 16:9). After the conference in Jerusalem regarding whether a man had to be circumcised to be saved (Acts 15), Paul and Barnabas decided to visit the churches they had established on their first journey to confirm them in the faith and tell them of the results of this meeting.

When a dissension arose regarding whether to take John Mark with them, Barnabas and Paul separated. Barnabas sailed with Mark to Cyprus. Paul and Silas journeyed overland to Derbe, Lystra, and Iconium. In Lystra, Timothy joined them as a co-worker.

The Holy Spirit forbade them to preach in Asia and Bithynia; consequently, they moved farther west until they came to Troas. In Troas, Luke joined them (as seen by the “we” passages), and Paul had a vision of a man saying, “Come over into Macedonia, and help us” (Acts 16:9). In obedience Paul, Silas, Timothy, and Luke went straight through Asia to Macedonia (modern day Greece and Turkey). It seems the Lord was in a hurry for the gospel to reach—and make converts—in Philippi, an important port city. For the first time the gospel was preached in Europe.

Thus, Paul and Silas continued that mission of the Great Commission (Mark 16:15), as they brought the gospel to that godless continent. With the conversion of two households at Philippi, a wonderful church was born. This church would be special to Paul the rest of his life:

How did the church of Christ begin in Philippi?

​It began with a female and a male member, demonstrating Galatians 3:28.

When Paul later wrote, “There is neither male nor female: for ye are all one in Christ Jesus,” perhaps he thought back to this first visit to Philippi when Lydia and the jailer became the first members of the first church in Europe.

What does this mean today? God is just as pleased to see a man respond to the gospel as a woman. The church is just as happy to have a female member as a male. Each has a different role; each is vital to a successful congregation. In our gender-war world, the church has a beautiful opportunity to show mutual love, submission, and pursuit of common goals within our own sphere as defined by God’s Word.

It began with a seller of purple (wealthy) and a keeper of the prison (working class), demonstrating the gospel is for every creature (Mark 16:15).

A “seller of purple” (Acts 16:14) meant Lydia sold purple clothes or cloth. At the time, such clothes were so expensive they were only worn by royalty and the rich. Roman soldiers clothed Jesus in a purple robe before His crucifixion to mock His “royalty” (Mark 15:17). The rich man was “clothed in purple and fine linen (Luke 16:19). It would have taken considerable capital to purchase these expensive wares for resale.

Lydia owned her own business, from what we can tell, and when Paul met her, she seems to have been away from home on a business trip. She had a second house (perhaps rented)—as opposed to only a room—for her stay in the city. After her conversion, she “constrained” the missionaries to use this house as a base of operations, so it must have been much larger than needed. Her home in Philippi became the place where the new church met (Acts 16:40). Since Lydia’s clientele would have been composed of rich people, it is likely she was a well-to-do lady cultured in proper manners.

In contrast to Lydia is the Philippian jailer. His name is not recorded (although Luke would have known him well since he remained in Philippi and worked with that congregation), perhaps indicating a lack of status. His occupation seems to have been the important detail. He was “the keeper of the prison” (Acts 16:27).

There is no record of anything bad about the jailer. In a sense, he was a government employee, with all the privileges that came with this role. We cannot condemn him for placing Paul and Silas in the inner prison, in stocks; securing prisoners was his job.

From the record, we might surmise some things of him:

It began with a “churched” and an “unchurched” person, illustrating the Parables of the Pearl and the Treasure (Matthew 13:44–46).

Arriving in Philippi, the missionaries first visited a river where women met to worship God on the Sabbath. Lydia was one of the women present that day. From Thyatira, she was likely a Jewish proselyte (Gentile convert to the Judaism).

Lydia was a devout woman who “worshipped God” (Acts 16:13–14), although she did not know about Jesus. She immediately became a Christian when she heard the gospel. Since it was “at church” that Lydia initially heard the good news, believed, and was baptized (Acts 16:15), today we might call her “churched.” Like the jewel merchant in The Pearl of Great Price who was seeking beautiful pearls (Matthew 13:45–46), she was seeking God’s truth and salvation.

The Philippian jailer was more like the man who happened upon a hidden treasure and happily, immediately bought the field to have the riches (Matthew 13:44). From the Scriptures, we cannot determine if the jailer was a religious man, but it seems likely he was “un-churched.” Possibly, it had never entered his mind that he could be saved or that he even desired to be saved. Before Paul and Silas entered his jail, he had probably never heard of Christians. His exposure to the gospel was what he briefly saw in the lives of Paul and Silas in prison. Since they were praying and singing while their feet were in the stocks (Acts 16:25), he may have heard them before he fell asleep.

When the earthquake hit, he discovered the fragility of his situation. In this life-and-death moment, he desperately desired salvation and cried out, “Sirs, what must I do to be saved?” He learned and obeyed the same hour of the night (16:30–34). Lydia was willing to sit through a sermon to learn, but the jailer did not need a sermon, only a Bible class.

We might be tempted to say, “The gospel just doesn’t reach people like it once did,” but it might be more accurate to say, “We just don’t reach people like we once did.” The problem is never with the gospel (Romans 1:16); it may be with us, or it may be with the hearers—an evil generation does not receive truth well (Acts 2:41; cf. Ezekiel 3:8–9). Still, even in wicked times, there are “Lydias” and “Philippian jailers” within our reach.

Who would we have predicted to be the better candidate to be a Christian—the well-to-do seller of purple or the roughhewn jailer? Probably Lydia. In truth, they were equally good prospects, since both were both converted. The Lord gives opportunity for salvation to individuals looking for it and to those who do not expect conversion. We must reach out to both groups. We sing the song “The Gospel Is for All”; we must also practice it. “All” includes the following prospects:

We limit ourselves if we only go to those who are of our same race, nationality, economics, education, politics, and neighborhood.

Our greatest success will come from the lower classes of any society (1 Corinthians 1:26). It is harder to deliver one from self-righteousness than from unrighteousness—a frostbitten heart can be harder to warm up than a lustful one is to cool down. The gospel can do both (Romans 1:16), but the former is harder to convince he needs it.

Terry Townson, preacher for the Curry Church of Christ in Jasper, Alabama, responded to a request about their recent evangelism successes that illustrates this point:

We have had several folks from our community obey the gospel in the last 12–16 months—folks who have been homeless, drug users, even a couple who had spent time in prison. They are poor and destitute, but they all have a desire to be Christlike. These folks would be looked upon by many (twenty-first century Pharisees) as societal outcasts (twenty-first century publicans and sinners); yet, these poor sinners responded as did many publicans and sinners in Jesus’ day.

When we reach out to publicans and sinners, there will be challenges. They may have bad habits to overcome—even addictions. They may lack fine clothes to wear to services—or even modest ones. They may need our financial assistance and help finding employment. They may have poor social skills. Nonetheless, each is loved by God and desired in heaven. Therefore, we love them and help them make it to heaven. Solomon wrote, “Where no oxen are, the crib is clean: but much increase is by the strength of the ox” (Proverbs 14:4). We could say, “Where no new converts are, the church has no problems; but much value is found in having new members.”

All classes meet in Christ Jesus. Click to Tweet
Though Lydia and the jailer lived in the same town, they were worlds apart. The first time they met was probably at Sunday worship after the jailer’s conversion. Their paths might never have crossed otherwise. When Paul’s letter to the Philippians was read years later, Lydia and the jailer may have shared the front row. The one thing these two very different people had in common was a belief in Jesus as God’s Son. This is the gospel’s glory: it saves both men and women, rich and poor, and high and low classes. It is for all and it is up to us to take it to all, without prejudice, without reserve.