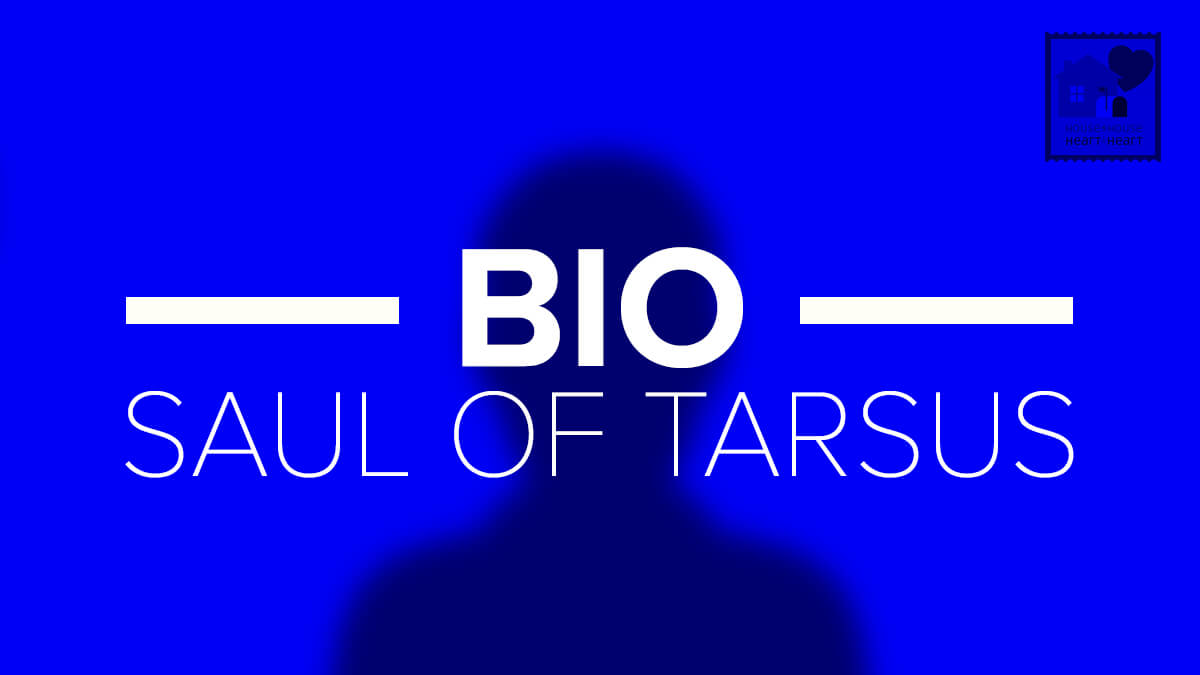 One could make a case that Saul of Tarsus (Paul) is the most remarkable follower Jesus ever had. He is mentioned more often than any other Christian in the New Testament (202 times[popover title=”Source” title_bg_color=”” content=”Plus “Saul” 32 times; Peter is second at 176 times (plus Cephas 4, Simon, 33).” content_bg_color=”” bordercolor=”” textcolor=”” trigger=”hover” placement=”” class=”” id=””]*[/popover]). He got a late start (1 Chronicles 15:8), but he made up for it by laboring more diligently (1 Corinthians 15:10). Before or since, no other person ever came so far and did so much.

In Hebrew Saul means “desired.” His Roman name was Paul, which means “little.” Because one of the ancients called him Homo tricubitalis,[popover title=”Meaning” title_bg_color=”” content=”Homo, man; tri – cubi – talis; cubi being four;tri, half; talis “of such kind.”” content_bg_color=”” bordercolor=”” textcolor=”” trigger=”hover” placement=”” class=”” id=””]*[/popover] tradition says he was but four and a half feet in height. If this is true, he was as remarkably little in stature as his namesake King Saul was remarkably tall. King Saul stood physically head and shoulders above the soldiers of Israel (1 Samuel 9:2); the apostle Saul stands spiritually head and shoulders above the soldiers of the Lord’s army.

Saul was born in Tarsus, a city of Cilicia, a free city of the Romans. He was a free man in that city (Acts 22:28), which was not usual for Jews in Roman provinces. In the Roman Empire, citizenship outside of Italy was reserved for those who made significant contributions to the Empire, so it is thought that perhaps Saul’s family was wealthy and philanthropic. We can say with certainty that Saul’s father and mother were native Jews; therefore Paul calls himself a “Hebrew of the Hebrews” (Philippians 3:5). He was of the tribe of Benjamin (the kingly tribe), which adhered to Judah in the national split. Benjamin was the favored son of the beloved Rachel, and not of less-loved Leah or a handmaid (Genesis 35:18). Saul’s father was a Pharisee, as was he (Acts 23:6). Saul had at least one sister and one nephew (Acts 23:16).

Paul’s early education was in the schools of Tarsus, which was known as a “little Athens for learning.” There he would have become acquainted with the philosophy and poetry of the Greeks, which he later remembered and used (Acts 17:28; Titus 1:12). At the traditional age of 14, young Saul was sent to the university at Jerusalem, where he studied the Torah (Jewish law). His tutor was Gamaliel, an eminent Pharisee (Acts22:3; cf. Titus 5:34). Thus Saul had the ultimate educational experience for a young Jewish male in that period.

Paul was a professor and religious leader, but he also had a “blue collar” trade. He was a tentmaker (Acts 18:3). It was common at that time for Jews who were scholars to be taught a handcraft so they could earn their maintenance in difficult times. This was also in keeping with the Jews’ belief that, “He who does not teach his son a trade teaches him to steal.”

Paul was converted about two years after Christ’s ascension. His conversion is recorded three times in the sacred history of the church (Acts 9; Acts 22; Acts 26). Although some unbelievers have accused the Bible of undue repetition, this simply highlights the importance of Saul to Christianity. In Acts 9 the historian gives the basic facts of Saul’s conversion in a chronological treatment of the early years of the church. It was a most remarkable turn of events that led the church’s number one enemy to become the church’s number one promoter. He literally left Jerusalem on a mission of persecution and ended that journey as a part of the group he hated. Apart from literally seeing and speaking with Jesus on that Damascus road, it is impossible to explain such a change.

About twenty years later, in Acts 22, Paul relates the details of his conversion as part of his defense before a furious Hebrew mob (Acts 22:1). He tries to show them that Christianity was not a rival to Judaism, but the natural conclusion of it. It was a schoolmaster to bring men to Christ, as he later wrote (Galatians 3:24). The Jews listened to him until he mentioned the fact that Jesus was sending him to the Gentiles (Acts 22:21). Then they cried out that he should die, cast off their clothes, and threw dust into the air. After soldiers rescued him from their violence, he was taken to a formal hearing before the Jewish council (Acts 23:1). This trial did not end any better. He was in danger of being pulled in pieces (Acts 23:10), and a plot to take his life was hatched (Acts 23:12, Acts 23:15). This was thwarted by soldiers taking him to Caesarea via a hasty nighttime mission Acts 23:23, Acts 23:31-33).

In Acts 26, Paul is again on trial—this time before the Romans. He relates the autobiographical material of his conversion to explain why he has ended up in Festus’s court. The point he makes is that Christianity is no threat to Rome. The proceeding ends much better, and if Paul had not earlier been forced to appeal to Caesar (Acts 25:11), he would have been set free (Acts 26:30-32). The paperwork had already begun its way up the chain, though, and he must see the appeal through to its conclusion. This worked out well for Christianity anyway and was doubtless in accord with God’s providence. Paul was escorted safely (and at Roman expense) to carry the gospel into the capital city itself.

Saul was born about AD 3, so he was a contemporary of Jesus and the apostles, but he grew up in a different part of the world. He would have been in school in Jerusalem while Jesus was a carpenter in Nazareth; and while the future apostles were learning the fishing trade, or other occupations, up in Galilee, Saul was attending classes in Jerusalem. Saul was converted to Christ about AD 34, at age 31. He spent the final thirty years of his life in a dead run for heaven. During this time, he traveled 12,000 miles by sea and land, and evangelized 50 cities on three continents. He planted scores of churches[popover title=”Totals” title_bg_color=”” content=”It is likely Paul established between twenty and one hundred congregations. He starts with Damascus as a base and travels over Arabia preaching, and probably establishing congregations. Then he is in Tarsus, Cilicia, and Syria preaching and probably establishing congregations. In the Galatian region Scripture mentions Iconium, Lystra, and Derbe (Acts 14). On the way to and through Macedonia we pick up Philippi, Thessalonica, and Berea (1 Thessalonians 2:17). While Paul used Corinth as a base, it is likely that several churches were planted in that region (e.g., Cenchrea,Romans 16:1). Next he moved to Asia and worked out of Ephesus. Acts 19:10 says all they which dwelt in Asia heard the word of the Lord, so perhaps Colossae, Laodicea, and Hierapolis could be added. Probably most of the churches in Revelation are as a result of his work or extensions of his work.” content_bg_color=”” bordercolor=”” textcolor=”” trigger=”hover” placement=”” class=”” id=””]*[/popover] and wrote 14 preserved epistles (counting Hebrews)—100 of 260 New Testament chapters—over a 20-year period.[popover title=”Totals” title_bg_color=”” content=”This is 52 percent of the books of the New Testament, and 38 percent of the chapters.” content_bg_color=”” bordercolor=”” textcolor=”” trigger=”hover” placement=”” class=”” id=””]*[/popover] Tradition says he died by beheading in Rome in AD 64, at the age of 61.