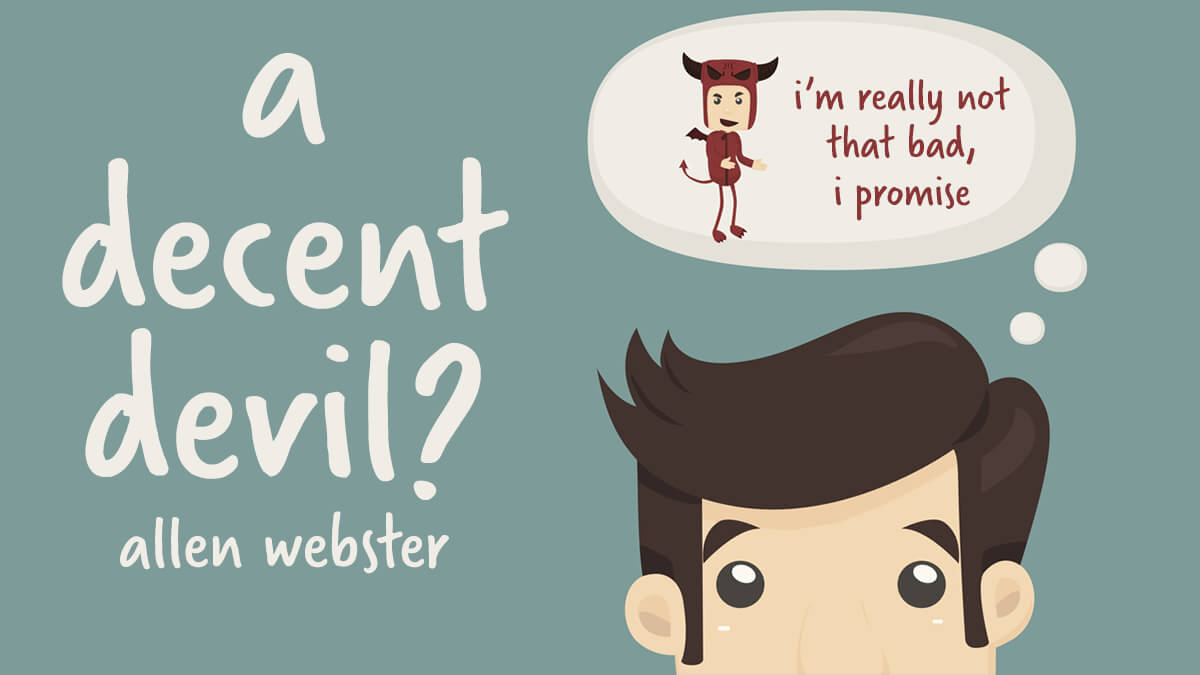 “It is notable that nearly all the poisonous fungi are scarlet or speckled and the wholesome ones brown or grey, as if to show us that things rising out of darkness and decay are always most deadly when they are well dressed.” — Ruskin

Some people think that if you believe in the devil, you never really graduated from childhood. Or as one put it, “Belief in a personal Satan is part of mankind’s nursery furniture.” Others believe in a quasi-devil who is really not as bad as everybody makes him out to be. He’s pictured as a red-suited, pointed-horned, long-tailed, fun-loving cartoon character in Hollywood films and Saturday Night Live skits.

The Bible, however, is not unclear about his existence or evil intentions.

The Bible, however, is not unclear about his existence or evil intentions. It should be enough to say that Jesus acknowledged Satan and talked often of him (e.g., Matthew 25:41; John 8:44). Satan is found in the Bible 55 times (19 times in the Old Testament; 36 in the New Testament). Devil is found 59 times (all in the NT). Analyzing these texts gives us much detail about our enemy.

Devil means “slanderer” or “accuser.” He slandered Job, but take heart, God defended him. When Satan accuses us as Christians before God (or to ourselves), we should remember that Jesus defends us as our Advocate in heaven. A faithful Christian’s case is in good hands (1 John 2:1-2; Romans 8:31-39; Revelation 12:10)!

He seeks to confuse us, and one of the easiest ways is to duplicate—with significant but hard to notice changes—God’s creations. In the parable of the tares, the enemy (Satan) sows tares (a poisonous plant that looks like wheat) among the farmer’s wheat (God’s world). Satan is in the religion business! He has counterfeit gods, counterfeit religions, counterfeit Bibles, counterfeit churches, and counterfeit preachers. He might prefer that we all become atheists, but he is content with us being idolaters or participants in false religions. The only way to determine the difference between the genuine and the fake is to shine the light of God’s Word upon it in careful examination (1 Thessalonians 5:21; 1 John 4:1).

Since Eden, he has been lying to us, and since he introduced death into the world, he has (indirectly) brought it to every single person who has lived here, starting with Adam and Eve (except Enoch and Elijah and those living presently). Paul warned, “But I fear, lest by any means, as the serpent beguiled Eve through his subtlety, so your minds should be corrupted from the simplicity that is in Christ” (2 Corinthians 11:3).

He has more followers presently than God does (Matthew 7:13-14). In fact, the only times the “good guys” have outnumbered the “bad guys” were when Adam stepped into the Garden and when Noah stepped off the boat. Nonetheless, when God gets ready to enforce His will, Satan will bow as will the knee of his every devotee (Revelation 22:2-3; cf. Romans 14:11; Philippians 2:10).

The word Satan means “adversary.” Though we do not see him, he is there laying traps for us (2 Timothy 2:24). Paul explained, “Put on the whole armour of God, that ye may be able to stand against the wiles of the devil. For we wrestle not against flesh and blood, but against principalities, against powers, against the rulers of the darkness of this world, against spiritual wickedness in high places” (Ephesians 6:11-12).

Abaddon means “destruction.”) It is his goal to wreck every couple’s marriage, every person’s health, every mind’s sanity, every heart’s peace, every maiden’s virtue, every friendship’s bond, every good work’s capability, every servant’s ministry, every church’s harmony, every sermon’s effectiveness, and every soul’s destiny.

WORKS: WHAT DOES SATAN DO?

In an ancient legend Satan summoned his top three aides to a planning session. One lieutenant, Rancor, said, “Let’s convince them there is no God.” Satan sneered, “That won’t work. They know there is a God.” Another aide, Bitterness, spoke up. “We’ll convince them God does not really care about right or wrong.” Satan toyed with the notion, but rejected it because he knew that too many already know He does care. Malice came with his idea. “We’ll let them think there is a God and that He cares about right and wrong. But we will keep whispering ‘there is no hurry, there is no hurry.’” Satan howled with glee and promoted Malice.

Hell was prepared for the devil and his angels, but people who reject Christ and believe Satan’s lies will suffer there with him (Matthew 25:41; Revelation 20:11-15). Do you need to make preparation to avoid spending time with the devil? God requires faith, repentance, confession, and baptism (Acts 8:35-40). One must remain faithful to Christ in order to avoid returning to the devil’s ways (2 Peter 2:20-22; Revelation 2:10).

2Interestingly, Satan disputed with Michael over Moses’ body (Jude 9). What he wanted with it we cannot tell, but we can be assured that it was not just to give it a decent burial!